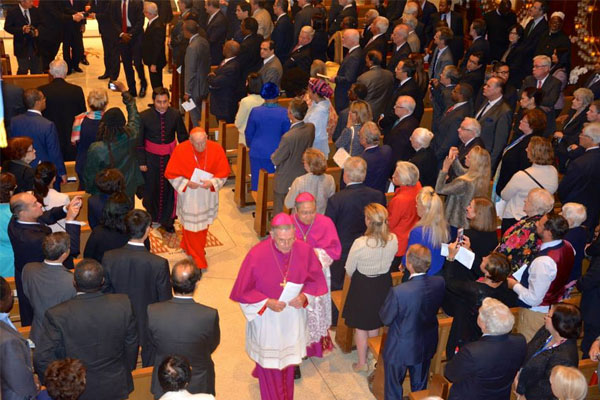 At the annual UN Prayer Service held September 14 at Holy Family Church in New York, the Secretary General of the United Nations, Ban Ki-moon, called the UN community to prayer in response to conflict and religious persecution.

“There is so much to grieve about now. War is driving millions of people from their homes; extremists are killing in the name of religion,” the Secretary General said. “This prayer service is an answer to extremists and terrorists who try to deride communities. Together we pray side by side with respect for common humanity.”

More than 350 attendees, including top UN officials, ambassadors, religious leaders and members of their delegations and communities, gathered at Holy Family Church, which is dedicated to serving the spiritual needs of the United Nations community. In addition to Ban, notable guests include Mogens Lykketoft, President of the 70th Session of the United Nations General Assembly, his predecessor Sam Kutesa, and Theodore Cardinal McCarrick, Archbishop-emeritus of Washington, who gave the meditation.

The annual event occurred on the eve of the commencement of 70th Session. Representatives from Christian, Muslim, Jewish, Hindu, Buddhist and Sikh communities prayed together to thank God for everything accomplished in the 69th Session of the General Assembly and to seek God’s aid for the success of the 70th Session.

Leaders shared their eagerness for the Holy Father’s September 25 address to the General Assembly and UN staff, and commended his loud voice calling individuals to act with greater respect for all people and the environment, especially in his recent encyclical letter Laudato Si’, in which he focuses on the integral ecology necessary to care better for our common home and those who dwell with us in it.

Archbishop Bernardito Auza, the Permanent Observer of the Holy See to the UN, led the congregation in a prayer written by Pope Francis in Laudato Si’. The prayer asked for God’s help to “protect the world and not prey on it; that we may sow beauty, not pollution and destruction.”

In short remarks toward the end of the service, the UN Secretary General spoke about the impact of Pope Francis and Laudato Si’ on the UN community.

“I was deeply grateful for the papal encyclical released in June calling climate change a moral issue and one of the principle challenges facing humanity,” Ban said. “I also appreciate the pope’s powerful voice in response to refugees and migrants arriving in Europe. He has been a walking advocate for humane response.”

In light of the sizeable number of migrants and refugees fleeing to more stable European countries, the Holy Father has recently asked all parishes in Europe to take in one migrant family. The Vatican will offer housing to two migrant families.

Ban recalled his May 2014 meeting with Pope Francis at the Vatican.

“He called us to spread solidarity especially for the poorest and most excluded people,” he said. “I fully agree that this is the purpose of the United Nations and I will do everything possible to answer this call.”

“We must decide between hope and despair. We can pass onto future generations a world of peace and unity and a world where no one is left behind and where women and girls are secure and empowered,” he said in brief remarks after Ban. “But it takes strong and courageous leaders. His Holiness Pope Francis is one such outstanding leader.”

In his meditation, Cardinal McCarrick, who was 15 when the United Nations was founded in 1945, spoke of the hope people of his generation felt at the UN’s inception.

“I can happily remember the founding of the UN and the excitement that the young people of my generation felt at the prospects for peace and world harmony in those exciting days,” Cardinal McCarrick said.

Cardinal McCarrick highlighted the common themes of religious people throughout the world are contrary to the atrocities extremists commit in the name of religion.

“The Christian Bible points out so powerfully that since God is the Father of us all then we must be sisters and brothers to each other, and the Koran challenges every one of us that to save one life is to save the whole world,” he said.  “How can we dare to find room for hatred?”

Cardinal McCarrick urged the UN to be at “the forefront of the struggle for human dignity.” He also invited the attendees to serve humanity with the vision observed in Pope Francis.

“Pope Francis speaks of the people at the periphery of our society as the ones we must help to raise up, to give dignity and respect, indeed from the little child in the womb of his or her mother to the dying elder torn by disease and pain or the migrant fleeing the terror of his own land or desperately seeking a land of opportunity for his children,” he said. “They are the neighbors we are called to embrace.”