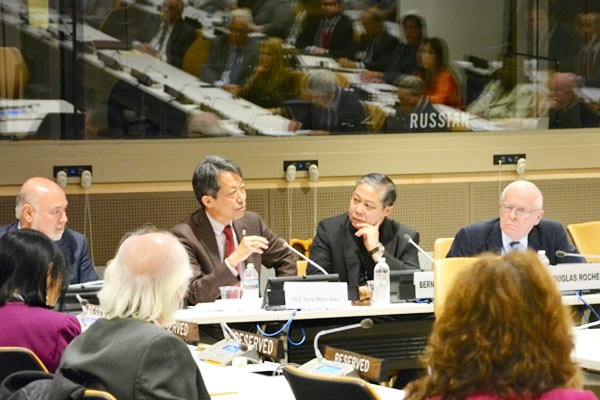 Speakers Probe Pope Francis’ UN Call for a Nuclear Free World
Nuclear Weapons violate human dignity: "We must see the human face of these issues," Kim Won-soo, the Under-Secretary General and Acting High Representative for Disarmament Affairs for the UN said in an Oct. 7 panel on nuclear disarmament that focused on the Holy Father's call at the UN for the international community to rid the world of nuclear weapons. The panel took place at the UN New York headquarters and was sponsored by the Permanent Observer Mission of the Holy See to the United Nations.
By Anna F FataAttachéafata@holyseemission.org

In his September 25 address to the General Assembly Pope Francis urged the United Nations to “work for a world free of nuclear weapons,”

In the wake of the Pope’s words, the Permanent Observer Mission of the Holy See to the United Nations hosted an October 7 panel to ponder more deeply Pope Francis’ words to the international community regarding justice, peace and the elimination of nuclear weapons.

Archbishop Bernardito Auza, Permanent Observer of the Holy See to the UN, moderated the October 7 panel in one of the UN Conference Rooms, which consisted of experts in security and disarmament, who advocated the urgent need for nuclear nonproliferation.

In his address, Archbishop Auza reverberated the sentiments of Pope Francis’ by saying, “War is the greatest injustice of all. We must strive with all our energies to save our generation and future generations from the  ‘scourge of war.’”

One of the speakers, Senator Douglas Roche, examined how the Pope’s message resonated with UN principles.

“Both the Pope and the UN seek an agenda of peace centered on the human rights of all.” Senator Roche said. “The primary goal of global security policy should be to prevent conflict and war and to maintain the integrity of the planet’s life support systems.”

Roche is the former Canadian Ambassador for Disarmament to the UN, an expert advisor to the Holy See’s UN Mission and author of the new book, The United Nations in the Twentieth Century: Grappling with the world’s most challenging issues: militarism, the environment, human rights, inequality.

In his address, Roche offered five steps for the international community to build conditions for peace, calling among other things for a nuclear weapons convention.

Although most countries have voted for comprehensive negotiations on nuclear disarmament, he said, the opposition of the major powers who possess nuclear weapons have inhibited such a convention.

“There can be no guarantee that more women in positions of authority will automatically produce a more peaceful world, but given the record of men in producing a culture of war over the past few centuries, the possibility of a more feminine-inspired world order is dazzling,” he said.

Roche’s other suggestions include establishing a permanent UN peace keeping force, institutionalizing the “responsibility to protect,” and reforming the UN Security Council.

Kim Won-soo, the Under-Secretary General and Acting High Representative for Disarmament Affairs for the United Nations, also spoke on the panel. He said the Pope’s message on nuclear disarmament is a summons for the international community to unite and act urgently to devise practical and effective solutions to rid the world of nuclear weapons.

“We must see the human face of these issues,” he said. “When we talk about the problems, the victims of violence, the refugees, the migrants, we tend to talk about numbers. We forget we are talking about real people.”

In the final talk of the panel, Jonathan Granoff, the President of Global Security Institute, said nuclear weapons are not only a security issue, but also the greatest threat to the environment.

“The likely consequences of nuclear war make other threats to the environment pale in insignificance,” he said, citing the World Commission on Environment and Development. “One thermonuclear bomb can have an explosive power greater than all the explosives used in wars since the existence of gunpowder.”

Granoff cited the Holy See’s December 2014 statement entitled Nuclear Disarmament: Time for Abolition and praised its analysis on the weak foundation of the principle of nuclear deterrence, which justifies the possession of nuclear weapons because fear of mutual destruction will deter opposing countries from using such weapons against each other.

During the Cold War, the Holy See expressed a conditional acceptance of the possession of nuclear weapons for the sake of deterrence if countries move toward progressive disarmament, but now holds this principle is longer valid.

“Changed circumstances bring new responsibilities for decision-makers,” the Holy See stated in the address. “The apparent benefits that nuclear deterrence once provided have been compromised, and proliferation results in grave new danger.”

“In order for deterrence to work, there must be a credible preparedness to annihilate everything, which means you must have people ready who have the intent to use the weapons,” Granoff argued. And that means preparing people to do something inherently immoral, deploying weapons that kill vast numbers of non-combatants and do irreparable harm to the environment.

Granoff said it is up to political figures and civilians alike to raise awareness on the urgent need to rid the world of nuclear weapons for the sake of peace and security.

Videos of the Interventions