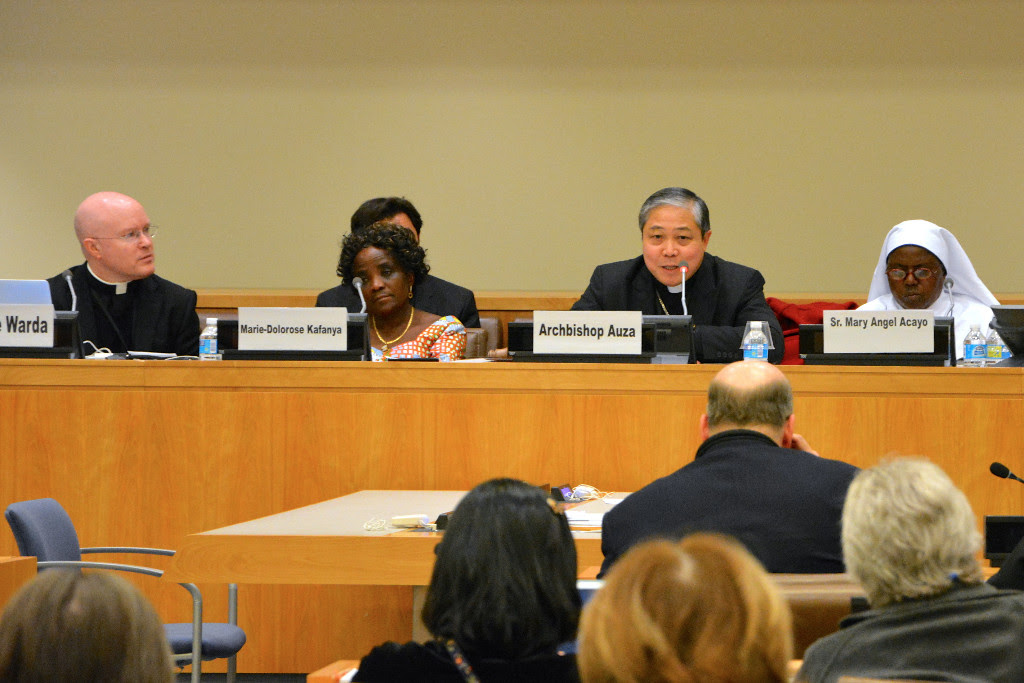 Holy See Side Event focuses on sexual violence against women in conflict situations
On March 22, those who care for victims of rape and sexual violence in the Democratic Republic of Congo, Uganda and Iraq shared stories of the horrors sexual violence women endure in regions of conflict and urged the international community for assistance at a side event hosted by the Permanent Observer Mission of the Holy See to the United Nations in New York during the Commission on the Status of Women.
By Anna FataAttaché

On March 22, those who care for victims of rape and sexual violence in the Democratic Republic of Congo, Uganda and Iraq shared stories of the horrors sexual violence women endure in regions of conflict and urged the international community for assistance at a side event hosted by the Permanent Observer Mission of the Holy See to the United Nations in New York during the Commission on the Status of Women.

“Rape is being employed as a conscious strategy by some armed groups as a war tactic to terrify and humiliate opponents, break up families, destroy their communities and societies, and in some cases deliberately infect women with HIV,” Archbishop Bernardito Auza, Permanent Observer of the Holy See to the UN, said. “ISIS is openly ‘selling’ Yazidi and Christian women and girls as young as 8, ‘giving’ them to ISIS fighters as gifts, and using them as a recruitment strategy in its propaganda materials.”

Archbishop Auza said that although all violence against human life is reprehensible, the nature of sexual violence to dehumanize and demoralize, particularly women and girls, makes it especially malevolent.

He applauded the network of Catholic organizations in areas of conflict that respond to the needs arising from violence on women and girls by providing them with essential healthcare and support.

Sister Mary Angel Acayo of the Little Sisters of the Immaculate Heart of Gulu has worked with women and girls who have been sexually abused, especially during the civil war in Northern Uganda.

One survivor of sexual violence during the Civil War is Grace Achola, who recounted her testimony via video. She was ambushed by rebels at a neighbor’s home and abducted at the age of 14 to live in captivity as a sexual slave for six years.

“They pick you and sleep with you along the road, in the bush, anywhere they want,” Grace Achola said. Women who fight against the rape are tortured or killed, Sister Angel said.

Grace escaped from captivity during an attack by hiding in a bush, where she was found by Ugandan soldiers and brought to a support center. Under the care of Sister Angel and other groups, she was able to finish secondary school, although she is stigmatized in Ugandan society for her sexual enslavement by the rebels, and subsequent child, Sister Angel said.

Sister Angel currently works to combat the rape-to-marry culture in the region of Karamoja, in which the typical route to marriage entails a man’s raping the woman or girl he likes, and her family’s forcing her to marry him.

“The girl has no choice,” Sister Angel said. “If she reports the attack as rape to her parents, she is normally beaten for denying the parents their ‘right’ to eat the cows as a form of dowry. If the girl does not marry the boy, no one will marry the girl because she is no longer a virgin.”

Educated women and girls are less susceptible to the assault because by the very fact they go to school, they are stigmatized as either infected by HIV/AIDS or other STDs, or not fit to manage a family or home, she said.

Sister Angel works to change social perception on rape and education by counseling abused women and girls along with men and community elders to end the cycle.

“The laws against rape are in the books, but are not being enforced because of culture and corruption,” she said, “The girls are continuing to be raped, infected with HIV and other STDs, and become child mothers at a very young age.”

Sister Angel said she is working toward building a training center that will offer women a safe, private place for counseling, sensitize cultural leaders about the evil of rape, promote formal education for women, as well as train local girls to become counselors in the center.

“I want to impart education to women and girls, for self-sustenance and to reduce their dependence,” she said.

Marie-Dolorose Kafanya served as the President of Women Involved in the Promotion of Integral Health (FEPSI, in French) for ten years in the Democratic Republic of the Congo, and said her organization provides health services to survivors of physical, sexual, and psychological trauma endured in conflict zones, particularly in the Beni territory.

She said many women were captured, tortured, forced into sexual slavery, cannibalism and other atrocities.

Kafanya shared the firsthand accounts of an 18-year-old girl whose parents and younger brother were killed by Ugandan rebels in front of her, and she was taken captive. She was able to escape after two months in captivity, and is aided by FEPSI, which she said enables her receive a free education and raise the child she conceived in captivity.

The final panelist, Pascale Warda, President of the Hammurabi Human Rights Organization, was unable to attend the event due to an unexpected visa issue, but a staff member of the Permanent Observer Mission of the Holy See presented a segment Pascale’s presentation, shedding light on the atrocities Iraqi women must endure at the hands of ISIS, such as being sold into slavery abroad, daily rape by multiple men, and other physical and psychological torture.

“The dignity of Yazidi and Christian women is being awfully violated,” Warda wrote. “On behalf of all Iraqi women, I’m calling on the international community urging for an effective solution to this cruel invading of Iraqi territory by ISIS, who are attacking human beings and their heritage, committing genocidal atrocities and crimes of war.”

Watch the event in its entirety here.