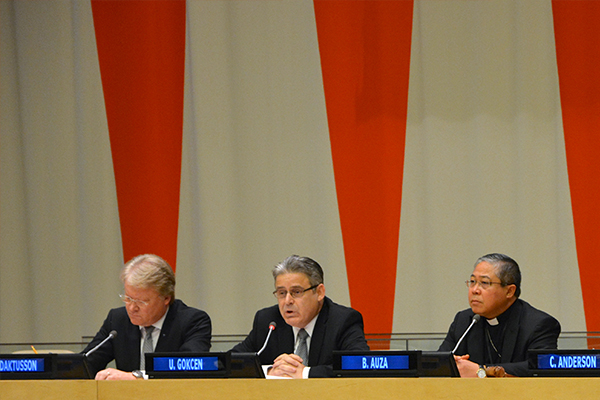 Remarks by H.E. Ufuk Gokcen
As delivered during the event organized by the Permanent Observer Mission of the Holy See to the UN, together with co-sponsors CitizensGo, MasLibres and In Defense of Christians on April 28, 2016 at the UN Headquarters in New York
By H.E. Ufuk GokcenPermanent Observer of the Organization of Islamic Cooperation to the UN

I am grateful to my friend Archbishop Auza for inviting me to this event. I have always thought that OIC and Holy See should join forces to promote messages of peace, compassion and coexistence. In my Huffington Post article in November 2013, I wrote, "In terms of perceived fault-lines in Africa and the need to protect Christian minorities in Muslim majority countries, political dialogue and practical cooperation between the Holy See in its capacity as a political entity and the OIC as the
intergovernmental political entity representing the Muslim world could be useful. Both could jointly encourage targeted interfaith action in conflict areas."

I also wish to reiterate what I stated in my intervention at theUN Security Council open debate on 27 March 2015 on the victims of attacks and abuses on ethnic and religious grounds in the Middle East: "Christians in the Middle East are constituent components of their nations as citizens who have or should have equal rights
to security, welfare and decent life like other compatriots of theirs. They have been an integral part of the social fabric, culture, struggles, achievements, as well as past and future narratives of their nations. Additionally in line with the deep rooted tradition of coexistence in the region, Christian clergy in Iraq and Syria lived with honor and dignity and enthusiastically shared aspirations of their nations for peace and prosperity. As a matter of fact, religious and ethnic minorities in the Middle East are valuable assets for their countries. It would be a great loss for the countries as well as for the entire humanity if precious examples of religious pluralism, harmonious coexistence and multiculturalism of the region are lost."

What has been endured by vulnerable communities from Nigeria to Iraq, at the hand of bigots and enemies of humanity have shaken our conscious. How can we forget what has been done to Yezidi girls and women? It is required that we act in determination and solidarity to combat the dark forces. As for the victims of outrageous crimes, due to hyper sensitivities and emotions involved, and without any disrespect, my humble message would be, to continue to speak up to raise awareness about the crimes committed and ask for accountability but also to show empathy for and solidarity with other communities who suffered. This is not a struggle between Muslims and Christians but a struggle between humanity and enemies of humanity.

I should underline that OIC Secretary General on every occasion publicly condemned the inhuman acts of Daesh and forced displacements, which he qualified as a crime that cannot be tolerated.

OIC on every occasion he stated that practices of Daesh have nothing to do with Islam and its principles that call for justice, kindness, fairness, freedom of faith and coexistence.

Naturally, in the face of horrible crimes perpetrated by Daesh, with a false and illegitimate pretense that it is acting in the name of Islam, particularly the vulnerable communities at the receiving end of these horrible crimes, would rightly ask us what we are doing other than condemnation.

As a response to this question, I should say that in cooperation with the international community, we are doing everything possible to delegitimize and discredit the arguments of not only Daesh, but also other terrorist groups such as Boko Haram and AI-Shabab who are hijacking Islam to manipulate young minds around the world. Certainly, the challenge we face is an existential one for many of our member states. As a matter of fact, defining struggles are going on in Muslim majority countries towards promotion of democracy, freedom of speech, freedom of religion, pluralism, empowerment of civil society, women and youth, as well as against terrorism and radical forces.

In this particular period in our history, showing empathy towards the concerns of all communities and cherishing compassion and respect for every single human being, and upholding the sacredness of every individual's human life and dignity without any discrimination, will surely enhance the prospects of peace and stability for the future.

Taking this opportunity I wish to commend the efforts of prominent Islamic scholar Shaikh Abdallah Bin Bayyah, President of the Forum for Promoting Peace in Muslim Societies and the Moroccan Ministry of Endowment and Islamic Affairs for the successful convening of the Marrakech Conference on January 25-27.

In Marrakech, Muslim leaders from around the world adopted a historic declaration defending the rights of religious minorities in predominantly Muslim countries. The Marrakech Declaration is based on the Medina Charter, a constitutional contract between the Prophet Muhammad (PBUH) and the people of Medina, guaranteeing religious liberty of all, regardless of faith, 1,400 years ago. The Marrakesh Declaration maintains that states have an obligation to foster cooperation between religious communities".

I believe that it is a quite significant development that the last OIC Summit held in Istanbul on 14-15 April2016, endorsed the Marrakech Declaration.

Lastly, I should commend the efforts ofUNDP, Alliance of Civilizations, UNESCO, UN Special Adviser Mr. Adama Dieng, Network for Religious and Traditional Peacemakers, KAICIID, Religions for Peace and other partners such as USIP and Sant'Egidio Community who have been making considerable efforts to promote peaceful and inclusive societies.

I should add that we will hear more about specific initiatives of the OIC member states during the PGA's High Level Event, titled religions for peace and sponsored by Kazakhstan, to be held on 6th of May.