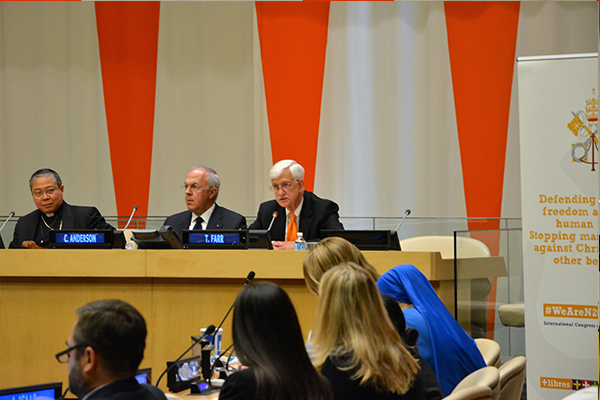 Remarks by Dr. Thomas F. Farr
As delivered during the event organized by the Permanent Observer Mission of the Holy See to the UN, together with co-sponsors CitizensGo, MasLibres and In Defense of Christians on April 28, 2016 at the UN Headquarters in New York
By Dr. Thomas F. FarrDirector of the Religious Freedom Project at Georgetown University

Saving Christianity, Pluralism, and Stability in Iraq and Syria

The status of Christians, Yazidis, Turkmen, and other minorities in Iraq and Syria constitutes a grave humanitarian crisis that has justly begun to stir the conscience of the world. Many have fled their homes. Some have died in place, murdered by ISIL terrorists. Some have experienced torture and rape, or have witnessed these horrors visited upon family members or friends. Many have been betrayed by their former neighbors. Some wish to leave the Middle East if they can; others aspire to return to their homes.

The flight of Christians from these and other countries of the Middle East has been ongoing for years, but it has accelerated in the last two years with the rise of ISIL. Some of the diaspora has found safe haven in Europe or America or other nations around the world. Among those Christians who remain in Iraq and Syria, virtually all are living in distressing circumstances, unable to work and provide for their families, and suffering the debilitating effects of fear and uncertainty.

Thanks be to God, many of these minorities – Christian and non-Christian -- are able to survive thanks to the humanitarian aid provided by international NGOs such as the Knights of Columbus, Aid to the Church in Need, and World Vision. Many of these NGOs are Christian-based themselves. The heroic witness of such groups is a reason for gratitude and hope during a season of despair.

But our task is to find other, more permanent reasons for hope, and other rebukes to despair. Those of us in the West with the resources and capacity to do something must ask ourselves what we should be urging beyond emergency relief for the victims, relief that keeps them alive but cannot, by its nature, solve the larger crisis. To employ a metaphor favored by the Holy Father, we should think of this task as that of a Field Hospital: having saved the patient’s life, we must now act to ensure he has a way to live, an opportunity to flourish in a society that recognizes and protects the dignity and worth that is given him by God.

Unfortunately, strategic thinking about these things has been quite limited in recent years. But that has begun to change. I believe the opportunity for serious strategic planning for a post-ISIL future has been provided by those who have declared as genocide the actions of ISIL against Christians and other minorities, as well as against Muslims who reject ISIL.

The Holy Father long ago labeled this war a genocide, and he was followed by the European Parliament, and, most recently, the United States. The U.S. declaration, by the way, was not at all a certainty until the Knights of Columbus produced a massive legal brief with evidence that simply could not be ignored. We should all be grateful to the Knights, and to the organization In Defense of Christians who assisted in that effort.

Let me note as well that in my view the proper use of military force against ISIL constitutes a Just War as understood in the Catholic tradition. I would hope that recent attempts to attenuate that tradition would not prevail, but that, to the contrary, circumstances in Iraq and Syria would generate consideration by the Holy See of a formal declaration that the use of force is fully justified. That would send a powerful message to ISIL and to the nations of the world.

But the larger point is this: the declaration of genocide and the effective, just use of military force against ISIL are both necessary steps in addressing the long-term crisis we are facing in Iraq and Syria and the broader Middle East.

But neither is sufficient.

Even if we assume that the genocide declaration galvanizes the United States and other nations to take more effective military action against the ISIL terrorists holding territory in Syria and Iraq, even if ISIL fighters are decisively defeated and eliminated as a fighting force, we will not have eliminated the problems that gave rise to ISIL. ISIL is a terrible symptom of a much deeper set of problems that we must address if Iraq and Syria are not to become perpetual incubators and training grounds for terrorism, and if Christianity itself is not to disappear from those two nations.

Those problems are many and complex. They involve the breakdown of the Sykes-Picot agreement that defined the borders of Iraq and Syria. They involve a deepening Sunni – Shia ideological war within Middle Eastern Islam; the dominance of revolutionary Iranian Shiism in Iraq; the constant temptation to radicalization of the Sunni minority in Iraq, and of Sunni majorities in Saudi Arabia and Egypt. They include deepening economic and political chaos in a region where stability seems increasingly an unachievable goal.

If these and allied problems are not seriously addressed, the results will continue to be catastrophic for Christians, other minorities, and the Muslim-majority citizens of the region. But they will also be catastrophic for Europe and the United States. This is because the flight of religious minorities from the region means the destruction of religious pluralism, and with it any opportunity for stability, stable self-governance, and economic development.

And so the stakes in the region involve more than protecting the victims of persecution. They also include the survival of Christianity and pluralism in Iraq and Syria, and the very possibility of stable self-governance and political harmony. While such an outcome will certainly not be good for Christians and Christianity, it will do great harm to Muslims, to Islam, and to their opportunity for dignity and flourishing in societies that govern themselves and live in peace with their neighbors. And it will mean that the Middle East will continue to be a net exporter of refugees, terrorism, and international instability.

Given the stakes -- to Christians and Christianity, to Muslims and Islam, and to international peace and security -- our thinking, indeed our imaginations, must be sufficiently radical to meet the challenge. We must plan for a post-ISIL order that sustains the possibility of pluralism, self-governance, and stability. While there may be other paths to such an outcome, one possibility must be consideration of an autonomous, multi-religious, multi-ethnic “safe zone,” possibly in the Ninevah Plain of Iraq. Such a zone would provide safe haven to minorities who are not now settled or safe. If successful it would also provide a model of pluralism, self-governance and stability for others in the region.

The obstacles to realizing this kind of protected zone are daunting. In addition to the elimination of ISIL as a military threat, its establishment would require resettlement or movement of tens of thousands of people, an international security force, an internal police force, economic revitalization, just and effective governance, treatment for trauma and psychological distress, and mechanisms for reconciliation – to name a few necessary steps. Surrounding and interested governments would have to accept, or at least not oppose, such an autonomous zone, especially Iraq and the Kurdish Regional Government, but also Turkey, Syria, Russia, Jordan, Lebanon and Iran. It is also true that the roughly 1 million Christians in Syria, most of them living in government controlled areas, would be unlikely to move to this kind of zone.

There are other alternatives that might save Christians and other minorities, alternatives such as their integration into the Kurdish society in Iraq where many are now living. There are some Kurdish leaders who would support this idea. But many Kurds would not. And many Christians, including many Assyrians, feel betrayed by Kurds and would not trust their long-term safety to the Kurds, would resist.

Let me conclude by saying that there are no easy solutions to the genocidal crisis we face in Iraq and Syria. The only thing we can be certain about is that we cannot do nothing. We must begin planning now for the post-ISIL future of that region, so that we can save Christians and other minorities in the region, preserve Christianity itself, and provide for the future security of our own children and theirs.