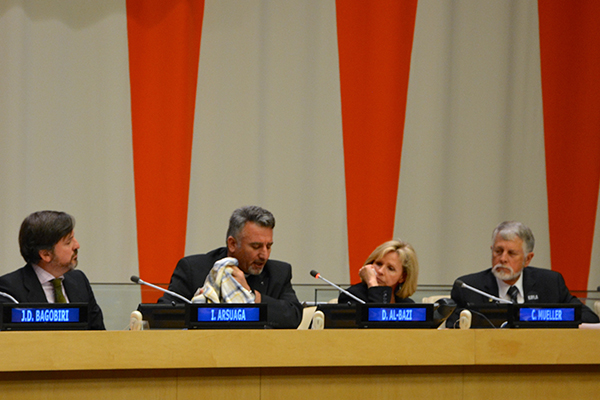 Remarks by Fr. Douglas Al-Bazi
As delivered during the event organized by the Permanent Observer Mission of the Holy See to the UN, together with co-sponsors CitizensGo, MasLibres and In Defense of Christians on April 28, 2016 at the UN Headquarters in New York
By Fr. Douglas Al-BaziChaldean parish priest kidnapped by ISIS in Erbil, Iraq

My name is Father Douglas Bazi, and I am a Parish Priest from Mar Elia Church and the center for Internally Displaced Persons in Ankawa, Erbil, in Northern Iraq. On
behalf of the remaining Christians of Iraq, I thank you for the opportunity to speak to you all today.

In this world of constant emergency, it is all too easy for the crisis of the day to be forgotten in tomorrow's news. Conferences such as this are critical in making sure
that the crisis of Iraq's Christians does not disappear from our thoughts and actions. In this opening speech, I would like to raise the critical points that I believe are
needed to understand the situation of the Genocide against the Christians of Iraq.

In 2003, there were over 1.5 million Christians in Iraq. Today, we are less than 300,000, perhaps even less than 200,000. Of these few remaining Christians, half
are internally displaced, living in camps mostly inside the Kurdistan Region, with little hope. "I too know what the people living in the camps in Kurdistan have been
through, because like them, I was kidnapped by terrorists and tortured, simply because I was a Christian."

How did this happen? Who bears the moral responsibility for this? What should be done for the Christians who remain in Iraq? And just as important, what should be
done for those Iraqi Christian refugees whose lives are on hold in desperate situations in other countries? Turkey, Lebanon and Jordan?? These are the questions we must look to answer.

As we discuss the disappearance of Christians from Iraq, it is important that we understand the history under which this has taken place. This has not been a
peaceful migration of people simply looking for a better life. No, this migration has been forced, and in many cases, brutally so. In both Europe and the United States,
this persecution of Iraqi Christians has been labeled Genocide.

And how did this Genocide affect the Christians of Iraq who have survived? Many people simply fled their homes, with death at their door, to any foreign country that
they could reach. For most of these people, their situation remains very difficult, and we should not forget them.

But what of the people who were able to reach a temporary safe place inside Iraq, but still decided to leave or who want to leave now? For these people the answer is
painful and difficult: they do not see any future, and they do not have any hope that a better future will come. Can we find ways to give hope and a future to those who
still remain? Can we find ways to help those Iraqi Christians trapped in difficult situations in foreign countries? This is our task now.

We must also discuss another thing: the possible end of Christianity in Iraq. Friends, I am a Priest. I cannot abandon hope. But at the same time I see reality in front of
me everyday. My people are losing hope and we are disappearing. Every day our numbers grow smaller. Soon we will be small enough for the world to forget us completely. Then Christianity in Iraq will essentially be gone. Can we change this future? Does the will exist among the good people of this world to change this reality? Has this finding of Genocide come in time to make a difference, and what can we do with it now?

This brings us to a very important question. Is it important that Christianity survives in Iraq? Of course there are many who will say, mostly from a distance,
that it is important to save Christianity in Iraq for cultural and historical reasons. There is great truth to this of course. But friends, the Christians of Iraq were, and
are, living, breathing human beings, not museum pieces. If there is a fundamental reason that they should survive it is simply this: on our small earth, peaceful people
should have the right to live in their homes in peace and dignity. And when the world stands by and watches any peaceful people disappear, it is a wound to the
entire world. Over time, this wounding will kill us all.

On Saturday, at the Roosevelt Hotel, I will have a chance to speak to you in greater detail about all of these issues.”

Again, I thank you for your time and the opportunity to speak. May God bless you all and may bless this gathering.