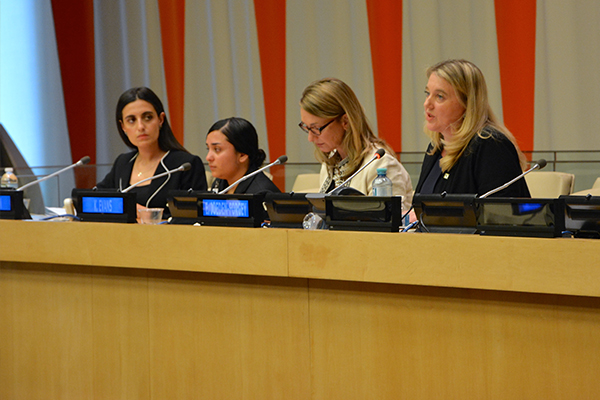 Remarks by Elisa von Joeden-Forgey
As delivered during the event organized by the Permanent Observer Mission of the Holy See to the UN, together with co-sponsors CitizensGo, MasLibres and In Defense of Christians on April 28, 2016 at the UN Headquarters in New York
By Elisa von Joeden-Forgey Associate Professor and Director of the Master of Arts in Holocaust and Genocide Studies Program, Stockton University

I would like to express my sincerest thanks to the organizers of this conference for asking me to speak. It is a great honor to be here and to be able to testify about my what I observed in Iraq this past January.

I was in Iraq for ten days in January 2016 with two other genocide scholars, Irene Massimino and Kjell Anderson. We were there to witness ISIS’s crimes by visiting
refugee camps, mass graves, and destroyed and emptied towns and cities.

What became quickly clear to us is that ISIS is committing an intense form of genocide against all peoples it considers to be unwanted religious and ethnic
minorities in the region: Ezidis, Christians, Shabak Shia, Turkmen, and even Sunni Kurds in some cases.

ISIS uses many techniques to commit genocide, so genocide is expressed differently depending on ISIS’s understanding of the group it is targeting. For example, ISIS targets the Ezidi with one of the oldest and most well defined pattern of genocide: direct killing combined with mass rape, enslavement and expulsion. It treats the
Ezidi with this explicitly genocidal pattern because it believes them to be pagans and devil-worshippers. A similarly murderous pattern has been directed against the
Shabak Shia group, whom ISIS consider to be apostates. Christians, as people of the book, are terrorized, forcibly displaced, and have had all their belongings taken from
them, including necessary medicines, baby formula, and sometimes even their shoes. They also have been kidnapped, raped, and murdered.

Sexualized violence against women and girls is an integral part of this genocidal process, as it is in almost all genocides. We know that over 3,000 Ezidi women and
girls were captured by ISIS when it overran Sinjar in August 2014. Of those, according to numbers kept by the Ezidi community as of December 30, 2015, 1,804
are still in ISIS captivity. Captive women and girls are subjected to horrific physical and psychological tortures, and many have been killed, or have committed suicide.
There are reports of ISIS raping very young girls in addition to teenagers. Women considered to be too old to become sex slaves have been massacred. A similar fate
has befallen the Shabak Shia women and girls. There are cases of Christian women being forced into captivity in much smaller numbers, as well as the abduction of
Christian children.

The sexualized violence committed by ISIS is part of a much wider pattern of reproductive violence that is evidence of genocide. Life force atrocities have been
committed against families and communities in characteristically cruel and alarming ways. Before being taken captive, many women and children have been
forced to watch as male family members are killed, including boys as young as 12. As we know, ISIS has murdered outright over 3000 Ezidi men and boys and has
captures at least two thousand more. Families are forcibly separated and young children have been kidnapped to be raised to become ISIS fighters and ISIS wives.
These children are terribly mistreated and terrorized and are often forced to commit atrocities. Women have been raped in front of their children. Children have
been forced to watch their mothers murdered. Women and children in captivity have been brutally separated from one another. There are reports of ISIS forcing
captive women and girls to have abortions and other reports, not yet substantiated, that ISIS is targeting disabled children within the Sunni population for murder.
Victims from the minority populations are mocked and humiliated, often in public.

ISIS forces some captives – especially young girls – to call their families in refugee camps and report the abuses they are suffering. In Erbil, many of the Christian
refugees with whom we spoke reported receiving telephone calls from ISIS soldiers occupying their hometowns, threatening and mocking them.
Before being displaced, many communities have been imprisoned in their homes, starved, plundered and terrorized on a daily basis. We heard reports of many
Christian families who paid the jizya and still had everything taken away from them. Christians who were forced to convert were often not spared displacement, plunder
and even murder. Some who refused were killed. After being starved in their homes, elderly residents of the ancient Christian town of Qaraqosh, for example, were
deprived of all of their belongings, bussed to a remote region, and forced to walk to the Kurdistan Regional Government. One elderly and frail woman had to drag her
husband most of the way after he harmed his foot and began to lose consciousness.

Alongside atrocities committed against individuals as members of groups, we have the destruction of religious institutions and other symbols of cultural heritage. One
estimate I heard recently is that ISIS has destroyed 70 percent of Yazidi shrines. This dense network of terror and degradation, this combination of mass murder,
sexualized violence, sexual enslavement, starvation, forced displacement, humiliation, plunder, the desecration of cultural symbols, and the kidnapping of
children, has all the hallmarks of genocide. Genocide is a complex process that aims to destroy not simply the bodies of group members, but also their hearts and their
souls. In taking aim at the deeper bond of love and responsibility that tie communities together, as well as the cultural representations of these bonds, ISIS is
attempting to eradicate religious and ethnic minorities not only from Iraq, but also from the face of the earth. It seems to operate in the knowledge that these groups
are very small and will have terrible difficulties sustaining themselves in refugee camps or as a diaspora scattered across the globe.

In the knowledge of this terrible crime and tragedy, it behooves all of us to work towards the return of refugees to their ancient homes, the rebuilding of what has
been lost, and the guarantee of their security. As one Ezidi religious leader said to me: “The world is like a flower, where each petal is a people. Each petal has its own
beautiful color. Do not let the color of the Yazidi people fade from this earth.” The same can be said of the color of the Iraqi Christians, the Shabak and the Turkmen, as
well as all other religious minorities in the region and in the world who are threatened with dissolution. Let us not let them all fade from this earth.