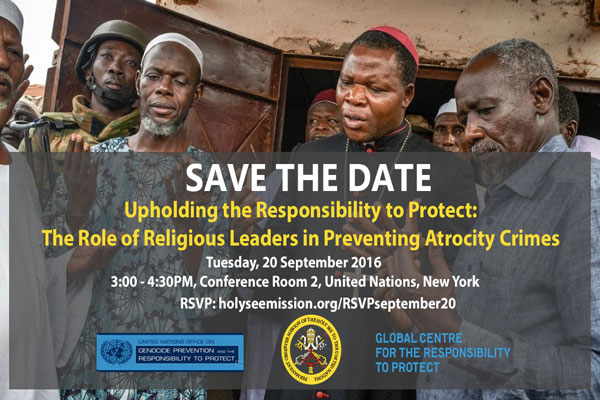 Religious Leaders and Responsibility to Protect

Invitation to Sept. 20 Event on the Religious Leaders and Responsibility to Protect

The Side Event is entitled “Upholding the Responsibility to Protect: The Role of Religious Leaders in Preventing Atrocity Crimes” and will feature keynote speeches by the Cardinal Pietro Parolin, Secretary of State of His Holiness Pope Francis, and religious leaders from Islam, Judaism and religious minorities as well as from the top UN official with regard to the Responsibility to Protect.

The Responsibility to Protect - known as R2P - is an international norm that seeks to ensure that the international community never again fails to halt the atrocity crimes — genocide, war crimes, ethnic cleansing and crimes against humanity. It was unanimously adopted in 2005 at the UN World Summit, the largest gathering of Heads of State and Government in history.

Those interested in attending are asked to inscribe at holyseemission.org/RSVPseptember20.

An explanatory concept note listing the speakers and a Save the Date Poster follow.

From the Holocaust to Srebrenica, the international community has tragically witnessed how religious intolerance has been utilized to incite hatred resulting in the commission of genocide, war crimes, crimes against humanity and ethnic cleansing.  In Syria and Iraq today we are witnessing the brutal persecution of Christian, Yazidis and other religious minorities by the so-called Islamic State, in acts which many have concluded amount to genocide and other atrocity crimes. Muslims communities in many countries, including Myanmar and Central African Republic, continue to be targeted because of their religion.

In 2005 at the United Nations World Summit, states unanimously committed to protect populations from genocide, war crimes, ethnic cleansing and crimes against humanity by adopting the Responsibility to Protect (R2P). States can fulfill their primary responsibility to protect populations by building inclusive societies that promote dialogue and understanding between civilizations, cultures and peoples.

The UN Secretary General has recalled that “religious leaders can make a particular contribution to preventing and responding to atrocity crimes, given their influence over large portions of the population and capacity to rapidly mobilize human and financial resources.” Religious leaders can assist states to uphold their Responsibility to Protect in many ways, including by disseminating messages of tolerance and reconciliation that help to prevent incitement to violence and heal divided societies.

For example, in the Central African Republic, the eruption of conflict in 2012 spiraled into a situation where atrocity crimes were committed against civilians on the basis of their religious identity. Amid the chaos, three religious leaders - Archbishop Dieudonne Nzapalainga, Imam Oumar Kobine Layama and Reverend Nicolas Guérékoyame-Gbangou - emerged as messengers of peace, promoting tolerance between the country’s citizens and urging greater international attention to the plight of populations in the Central African Republic.

Recognizing the importance of post-conflict reconciliation in the country, in November 2015 His Holiness Pope Francis traveled to the Central African Republic on a mission of peace. During his visit, Pope Francis met with both Christian and Muslim communities and delivered messages of tolerance, which contributed to the largely peaceful elections in 2015-2016.

The objective of this meeting is to have an open and constructive discussion about the indispensable action that religious leaders and organizations can take to prevent atrocity crimes as well as ways to build inclusive and peaceful societies. Keynote speeches will be delivered by religious leaders from Christianity, Islam, Judaism and religious minorities. Mr. Adama Dieng, UN Special Adviser on the Prevention of Genocide, will provide an overview of the Fez Plan of Action - a strategy to encourage religious leaders to be active players in preventing atrocity crimes, and in particular, incitement to violence. Member States and the public will be given the floor during the question and answer section.

The following questions will guide the discussion:

• How can religious leaders and actors work together with governments and other institutions to help them fulfill their responsibility to protect and to promote inclusivity, dialogue and respect for diversity?

• What do religious leaders and faith-based organizations need from governments and other institutions to fulfill their mission of peace-making?

• How can religious leaders and actors contribute to preventing and countering incitement to hatred, hostility and violence?

• How can religious leaders be encouraged to speak out not only when their community is targeted, but also when a religious community different to their own is targeted?

• During times of crisis, what can religious leaders do to protect religious minorities within their communities?

•  In post-atrocity situations, how can religious leaders and actors contribute to the truth and reconciliation processes necessary to heal divided societies? 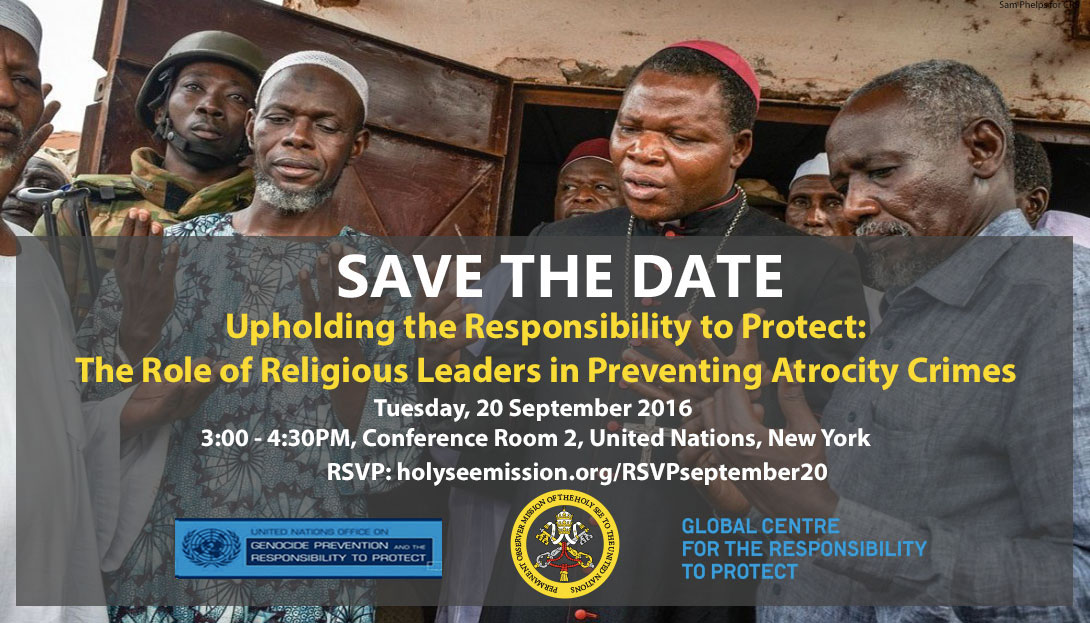