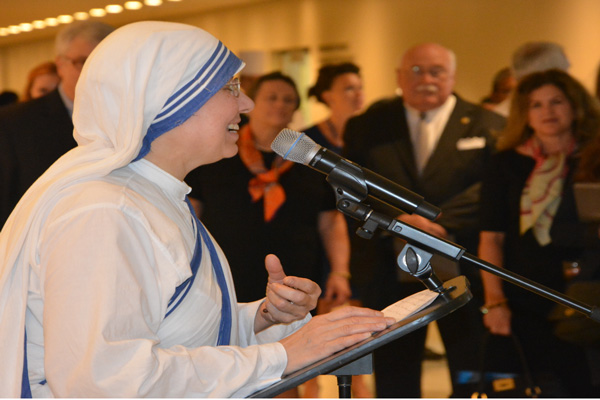 During a series of events at the UN following Mother Teresa’s September 4 canonization by Pope Francis, those who knew her said that she exemplifies the virtues that all those working for peace, to leave no one behind, and to lift the poor out of extreme poverty need to achieve those noble objectives.

The climax of the week was the September 9 event entitled “Leaving No One Behind: Mother Teresa’s Enduring Message for the International Community Today” sponsored by the Holy See Mission, together with the Permanent Missions of Albania, India, Italy, and the Former Yugoslav Republic of Macedonia, and Alliance Defending Freedom International.

Archbishop Bernardito Auza, Permanent Observer of the Holy See to the UN said she personifies the motivation behind the sustainable development goals, which aim to “leave no one behind.”

“She cared for the dying who had been left abandoned on the streets; for lepers; for those with HIV/AIDS before governments and most in the world were aware of what was going on,” he said. She likewise cared “for pregnant mothers and other women in need; for orphaned, abandoned, unwanted and unborn children; for the homeless and hungry; for refugees and those who others considered ‘untouchable.’”

Alan Sears, President and CEO of ADF International, said Mother Teresa represents the “personification of the highest and best ideals of the U.N. at its founding.”

“The United Nations represents for so many people the world over the great hope for peace in our time, and for all time,” he said. “Mother Teresa, for most of a century, was the human face of that hope.”

Kathryn Spink, an expert on the newly-canonized saint and author of Mother Teresa: An Authorized Biography said Mother Teresa and her community served the marginalized anywhere there was a need, which often meant in dangerous places like Beirut during the Civil War, or tending to lepers in Calcutta.

“War zones, places of natural disaster, of famine, death and danger - nowhere was to be beyond the reach of her Missionaries of Charity.”

Father Leo Maasburg, a companion and translator of the saint and author of Mother Teresa of Calcutta: A Personal Portrait, said she did not focus on “poverty” as an abstract concept, but saw the poorest of the poor as persons much loved by god, and served them with tenderness and compassion.

Father Daniel Jones, a theology professor at Sacred Heart Major Seminary in Detroit who has spent two decades as a priest ministering to the Missionaries of Charity, said Saint Teresa’s role as peacemaker also stemmed from her concern for the poorest of the poor.

“She believed in a subsidiarity of peacemaking,” he said. “You go to the lowest point and make peace there.”

The second panel consisted of speakers from the Permanent Missions of countries that had unique connections to Mother Teresa, who said, “By blood, I am Albanian. By citizenship, an Indian. By faith, I am a Catholic nun. As to my calling, I belong to the world.”

Ambassador Besiana Kadaré, Permanent Representative of Albania to the UN, said while Albania was Mother Teresa’s home, it was also, ironically, the only country she was not allowed to visit for several decades until the communist regime fell in 1991.

“It is a sad paradox that this modern woman who offered comfort to the suffering and dying worldwide could not do so for her own mother who was to die desperate and lonely.”

Ambassador Kadaré said that today Albanians are proud of their connection to Mother Teresa, and the country’s airport, as well as many universities and public spaces, possess her name.

Citizens of Macedonia, home today of Skopje, the place of Mother Teresa’s birth, have great appreciation for her values of welfare and respect for all people regardless of religion and race, according to Ambassador Vasil Andonoski, Permanent Representative of the Former Yugoslav Republic of Macedonia, who credited her influence with society’s changed attitude toward the marginalized.

Ambassador Syed Akbaruddin, Permanent Representative of India to the UN, where Mother Teresa started the Missionaries of Charity in Calcutta, said in India Saint Teresa is admired for her unconditional love for people regardless of their social status or religion, and noted that Indians from diverse religious backgrounds traveled to Rome to celebrate her canonization.

Ambassador Inigo Lambertini, Deputy Permanent Representative of Italy to the UN, said that there is likewise great admiration for Mother Teresa in Italy, where she had several houses for the poor. He added that happily the “action of the UN is strongly influenced by the incredible life of Mother Teresa.”

Sister Clare Roy, a Missionary of Charity serving in the Bronx, spoke on behalf Sister Prema Pierick, Superior General of the Missionaries of Charity who was not able to attend because of celebrations of Mother Teresa’s canonization in Skopje. Sr. Clare said that one does not need to go far to find people to serve, noting that there is severe material and spiritual poverty in New York.

“The greatest suffering is being unloved and uncared-for,” she said. “It is Calcutta again, here in New York.”

Following the Conference, a dinner was held at the Church Hall of Holy Family Parish for the event attendees, including over 100 of the “Friends of Mother Teresa” served by the Missionaries of Charity in their various apostolates in the New York area.

In addition to the conference, the Holy See, together with ADF International, sponsored a week-long Exhibition from September 6-9 at the UN, which included four triptychs on her life, her role as a peacemaker and peace builder, her care for the poorest of the poor and her passion to leave no one behind.

The Knights of Columbus also brought to the Official Opening and to the Conference the original painting of the image of Saint Teresa from which the banner hanging at her canonization in St. Peter’s Square was made.