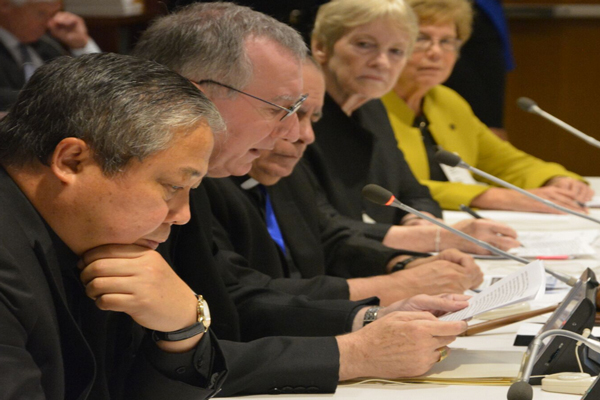 On September 19, during the UN Summit for Refugees and Migrants, The Permanent Observer Mission of the Holy See to the United Nations, together with the International Catholic Migration Commission and Caritas Internationalis, sponsored a High-Level Side Event entitled “Responsibility and Solution Sharing: The Role of Religious Organizations in Responding to Large Movements of Refugees and Migrants.”

Cardinal Pietro Parolin, Secretary of State to His Holiness Pope Francis, delivered the keynote address, in which he illustrated the numerous struggles refugees and migrants face, a journey he said is often involuntary, caused by conflict, persecution, poverty, and environmental degradation.

“It is even worse when we consider that, during their journey, migrants and refugees face the dangers of trafficking, starvation and many forms of abuse,” he said. “And upon arriving at their destination, rather than finding a safe haven, they find mistrust, suspicion, discrimination, extreme nationalism, racism and a lack of clear policies regulating their acceptance.”

Cardinal Parolin said refugees and migrants are a top priority for Pope Francis, whose appeals to parishes in Europe are responsible for the settlement of 30,000 displaced peoples. He also noted that in the new Vatican Dicastery (Department) for Promoting Integral Human Development, Pope Francis will personally oversee matters concerning refugees and migrants.

The panelists shed light on the important role religious organizations have in tending to the needs of migrants. The panel was moderated by Monsignor Robert J. Vitillo, Secretary General of the International Catholic Migration Commission (ICMC).

Gregory Maniatis spoke on behalf of ICMC President Peter Sutherland and UN Special Representative for Migration, and said individuals and communities are responsible for treating migrants and refugees with dignity.

“How to live well together, harkens back to fundamental values of dignity of men and equality of man which is the heart values of Christianity and the UN,” he said, quoting remarks from Sutherland. “We are not helpless even if national policy is not in our hands. Attitudes we show may impend on migrants and our communities that have decisions to make about migration.”

“Religious organizations helped form public opinion to create the conditions for leaders to take humane and rational decisions as opposed to those based on unwarranted fears and speculations,” she said.

Father Flor María Rigoni, who has worked in the violent Northern Triangle of Mexico for 18 years, called for more attention and humane treatment paid to migrants undertaking the dangerous journey to flee Central America, saying they are often met with hostility at the U.S. border.

“The flow of migrants do not chose migration for a better lifestyle or a better climb up the social ladder,” he said. “They escape and flee for survival.”

Sister Donna Markham, President and CEO of Catholic Charities USA, which in 2016 settled one third of the 70,000 refugees in the U.S. and has provided legal services to 19,000 migrants, noted the high number of migrants the organization encounters on the U.S.-Mexican border and expanded on the difficulties of their journey.

“To get to the border these children and families face a harrowing human traffickers, violence, physical and sexual abuse,” she said. “Once they get to the US border their struggles are not over; many face detention centers, shelters or foster care.”

Effectively integrating migrants into their new societies has a positive effect on communities, Sister Markham said, citing a Notre Dame University study that found in refugees’ first 20 years, they individually contribute $21,000 more in taxes than they receive in aid.

Petra Hueck, Director of ICMC Europe, focused on changing attitudes on migrants and refugees in Europe and gave concrete examples to show the vital role of faith based organizations in assisting refugees. An initiative called “New Neighbors,” in which members of parishes in Cologne, Germany help integrate refugees into their communities through services like language training and homework help, and empower refugees to become volunteers themselves.

Journalist Omar Al-Muqdad, a beneficiary of services from Catholic Charities and ICMC when he came to the U.S. as a Syrian Refugee in 2012 after spending three years in a Syrian prison for criticizing the regime, shared his story, and thanked the organizations and families who welcomed him.

“I found the kind of freedom I needed most as a human being and, of course as a journalist,” he said. “I wish this freedom on all my people.”