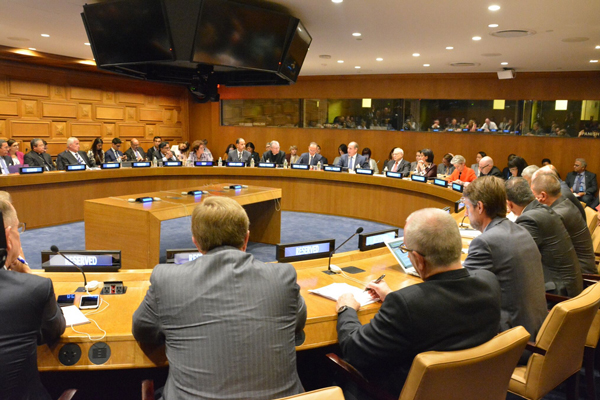 On September 20, the Holy See co-sponsored a high-level panel discussion entitled “Countering and Preventing Violent Extremism through Education,” together with the Permanent Missions of Albania, the U.S., Jordan, Morocco to the United Nations and UNESCO. The event took place at UN Headquarters in New York City.

Ditmir Bushati, Foreign Minister of Albania, said the disturbing surge of foreign fighters from more than 100 countries who have left their homes to join violent extremist groups shows that governments must increase their efforts to combat extremism through education.

“Education is perhaps the most comprehensive and long-term action where our governments need to invest to build a stronger and resistant future generation in facing such threats,” he said.

Cardinal Pietro Parolin, Secretary of State to His Holiness Pope Francis, said the complex psychological, socio-economic, political and ideological elements that lead individuals, especially young people, to join extremist groups must be addressed, and faith based groups have a key role to play.

“Faith-based communities’ educational efforts not only form men and women in religious practice, but can also form them to be responsible citizens,” he said.  “This is especially important if we are to counter destructive narratives that engender radicalization and extremism.”

Cardinal Parolin also said faith communities and all levels of government should work together to promote wellbeing of families.

“Parents are the first educators of their children, as they impart not only faith but values and solid instruction in the ways of sowing justice and peace within the societies they live,” he said. “The radicalization of young people often occurs when there is a lack of education and vigilance at home.”

David Saperstein is United States Ambassador at-large for religious freedom. Ambassador Saperstein said in order to combat extremism, education should also aim to integrate individuals into their broader communities, satisfying their need for belonging and identity, which will make them less vulnerable targets for extremist groups.

“Education can contribute to building resilience among communities, individuals and the state by cultivating citizenship, democratic values, and alternative nonviolent opportunities,” he said.

Dina Kawar, Permanent Representative of Jordan to the UN, said the country is currently revising curriculum to combat extremism. Jordan is currently educating 100,000 Syrian refugee students, Ambassador Kawar said, and is working to increase the number.

“Otherwise this generation will be lost and any lost generation isn’t just a problem for the country they are in, but for the whole region,” she said.

Abbadi Ahmed, an Islamic Scholar and Secretary General of the Mohammedia League of Moroccan Ulama, said it is important to combat extremists’ malicious use of Islamic texts by building authority among credible Islamic leaders and providing counter narratives, emphasizing the role of education in the family. He urged responsible actors to prevent extremism by researching the techniques extremists use to persuade young people.

“We are in a race to invest in their hearts and minds,” she said. “It’s not just about reading and writing, it is about values and what we instill.”