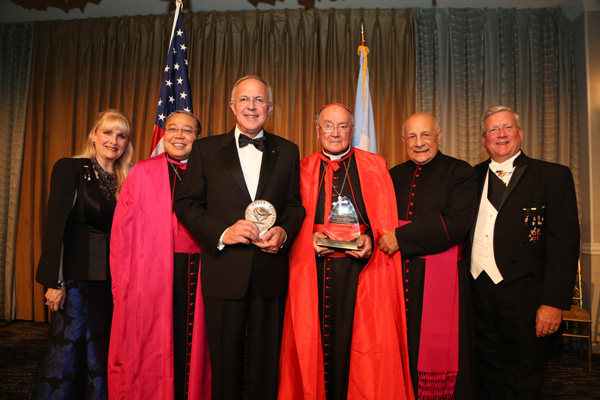 On the occasion of its 25th annual Gala Dinner on October 12, the Path to Peace Foundation presented the 2016 Path to Peace Award to the Knights of Columbus and Supreme Knight Carl Anderson for their work on behalf of Christians in the Middle East, especially those persecuted by ISIS in Iraq and Syria.

Upon receiving the award, Anderson said, “The ones most deserving of an award, and of all the support we can give them, are the Christians in the Middle East, especially in Iraq and Syria. The Christian witness of mercy and forgiveness is the true path to peace in the Middle East.”

Anderson led the Knights of Columbus as they advocated for the U.S. Congress and State Department to recognize the persecution of Christians and other religious groups by ISIS as genocide.

“As Christians, we understood that our brothers and sisters in Christ who were being killed for their faith by ISIS were martyrs,” he said. “As citizens, we understood the importance of providing the proper legal definition for this slaughter, and the only adequate legal term was genocide.”

In addition to their advocacy work, the Knights of Columbus have directed millions of dollars to those forced to endure persecution or flee their homes due to the atrocities committed by ISIS.

In the presence of UN Ambassadors and diplomats, as well as Eastern Bishops and Priests, including Syriac Catholic Bishop Yousif Habash and Maronite Bishop Gregory Mansour, who prayed the Invocation and Benediction, respectively, Supreme Knight Anderson called the international community to follow suit in supporting persecuted communities in the Middle East.

“For two thousand years these Christians have lived heroically,” he said. “Either Christianity will survive and offer a witness of forgiveness, charity and mercy, or it will disappear, impoverishing the region religiously, ethnically and culturally.”

In commemoration of its 25th anniversary, the Foundation also presented a special recognition to Cardinal Renato Martino, who established the Path to Peace Foundation in 1991 to support the work he and the Permanent Observer Mission of the Holy See to the UN was undertaking on behalf of the Holy Father at the United Nations during his 16 year tenure as Permanent Observer.

In his remarks, Cardinal Martino said the Foundation played an indispensable role in expanding the impact of the Holy Father’s work at the UN, especially in responding to the diverse needs of the most vulnerable throughout the world by funding humanitarian projects.

“The most notable accomplishment of the Foundation is the promotion of Peace, in harmony with the activity of the Catholic Church,” he said. “The challenges and opportunities that the Foundation will face are the same It has faced in the last 25 years. It must be reinforced with new enthusiasm to face new situations.”

Archbishop Bernardito Auza said in his words introducing Cardinal Martino and Supreme Knight Anderson that “over the course of the years, the Foundation has grown, allowing it to provide much more humanitarian assistance, increase the size of the staff of the Mission, provide housing for permanent staff, undertake repairs and renovations to the residence where the Pope stays, and so many other important projects.” The day of the Gala, he noted, the Foundation awarded $20,000 to the most affected Dioceses in Haiti, to help with the recovery from Hurricane Matthew, and three other grants.

He made reference in his remarks to Supreme Knight Anderson’s intervention at an event sponsored by the Permanent Observer Mission of the Holy See six months ago at the UN in which he said Mr. Anderson “gave a powerful and unforgettable keynote in which he called the international community concretely to stop the genocide, hold accountable and prosecute those who are commit it, provide relief to those suffering, promote the human rights and dignity of religious minorities in the region, and prepare for the liberation of the region.”

He said, “It was an unmistakable sign of the leadership that the Knights of Columbus are now playing at the international level for peace and humanitarian assistance and of how seriously the Knights take their commitment, as Knights, chivalrously to do all that’s necessary to protect and defend those in harm’s way. It’s for all of these reasons that the Board of Directors of the Path to Peace Foundation wanted to single out for recognition and emulation the Knights of Columbus and their Supreme Knight with the 2016 Path to Peace Award.”