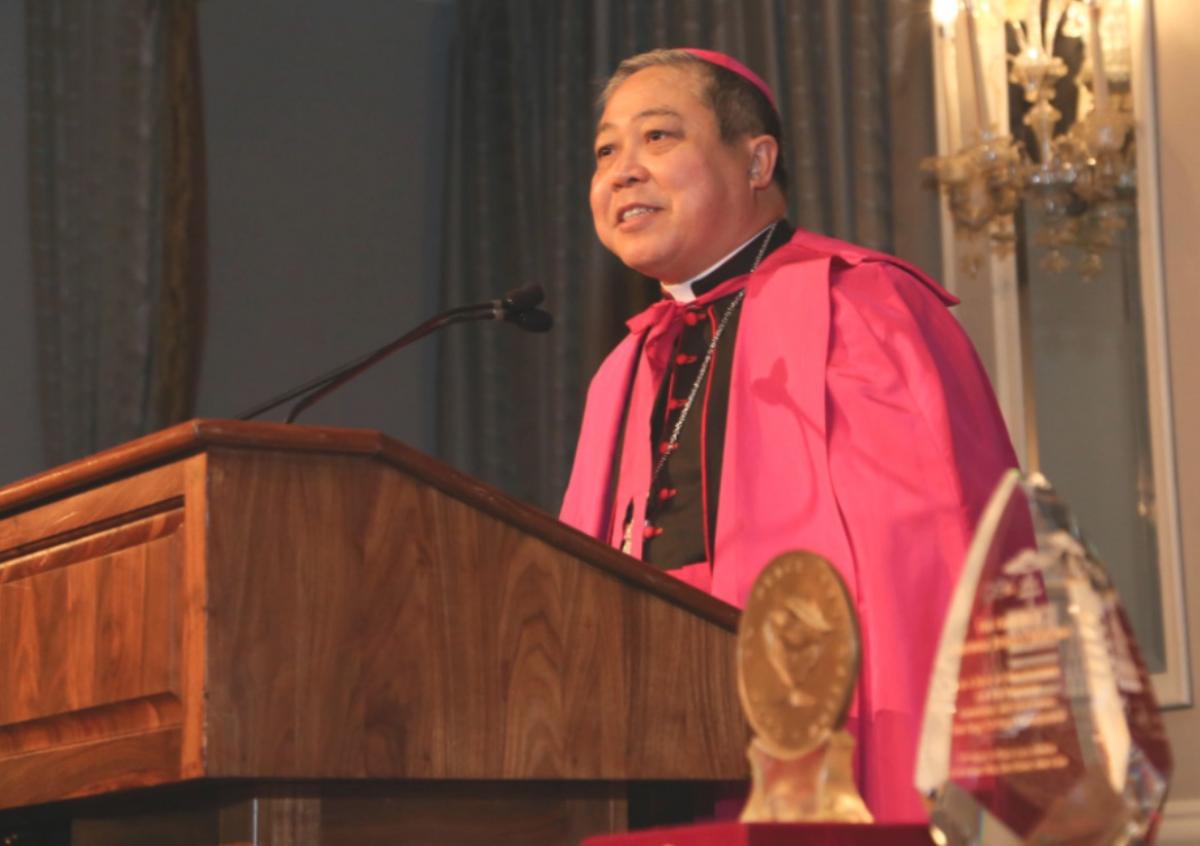 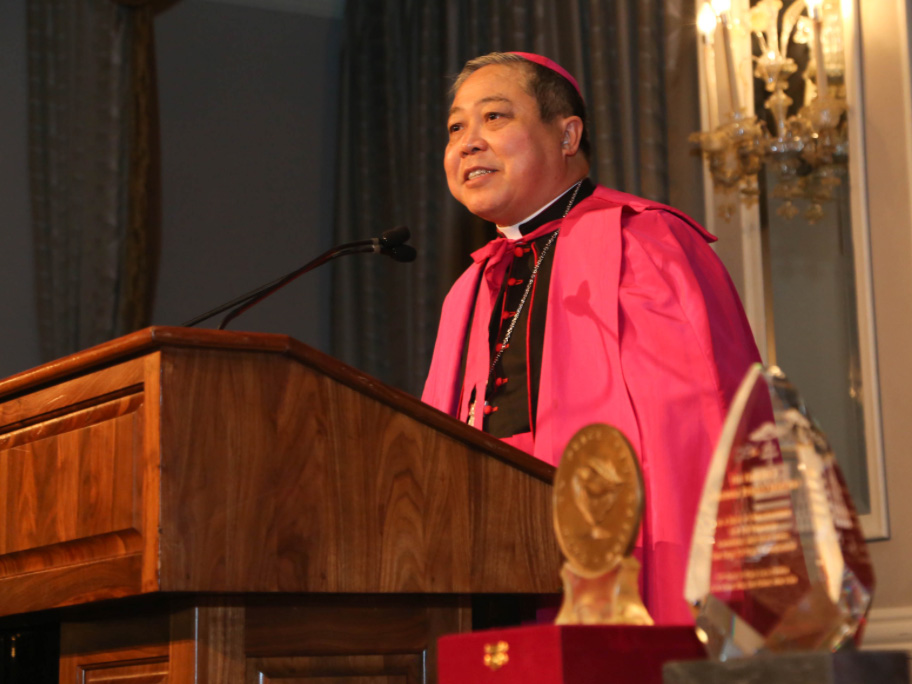 Your Eminence, Your Excellencies my brother bishops and fellow Ambassadors, Reverend Clergy and Religious, Distinguished Guests, Friends of the Holy See, Dear Ladies and Gentlemen,

I sincerely thank you for your presence tonight at the Annual Gala Dinner of the Path to Peace Foundation.

The Path to Peace Foundation was founded 25 years ago in 1991 to support the work of the Permanent Observer Mission of the Holy See to the United Nations and to assist the Catholic Church as a whole, through the words and activities of the Pope and the Holy See, to guide the Church along the way of peace.

Tonight is our 24th Gala Dinner, held each year to help the Path to Peace Foundation meet both of these principal objectives, raising resources to strengthen the work of the Holy See’s presence at the UN and also honoring those leaders who, as peacemakers, are inspiring examples and champions of those in situations where the tranquility of order, solidarity and social harmony does not reign.

We would not be here were it not for the foresight of Cardinal Renato Martino, who was Permanent Observer of the Holy See to the UN for a record 16 years, between 1986 and 2002. The Holy See was providing for the basic expenses of the Mission but was not in a position to assume many other costs, so with the help and encouragement of many generous friends, he established The Path to Peace Foundation to pay for these other expenses necessary to spread and strengthen the Church’s message and work, and to respond to the requests for help for humanitarian projects in needy countries. Over the course of the years, the Foundation has grown, allowing it to provide much more humanitarian assistance, increase the size of the staff of the Mission, provide housing for permanent staff, undertake repairs and renovations to the residence where the Pope stays, and so many other important projects. Today the board just granted $20,000 to Haiti in order to help those affected by Hurricane Matthew.

As we celebrate the Silver Jubilee of the Foundation at this Year’s Gala, the Board of Directors and I wanted to do something special to honor our founder, in gratitude for his vision and the way he made that vision consequential. And so I would like to ask Msgr. Hilary Franco, on behalf of the Path to Peace Foundation Board, to read a decree of special recognition to Cardinal Renato Martino … and please join me in congratulating His Eminence as I invite him to say a few words of inspiration.

Each year at our Gala Banquet, the Path to Peace Foundation has honored an individual who has distinguished himself or herself for leadership in peacemaking and, through humanitarian efforts, in peacebuilding. As you will see in your program, we have honored Kings and Queens, Princes and Princesses, Presidents and Prime Ministers, Secretaries of State and Secretaries General, Ambassadors, Grand Masters and Courageous Archbishops. This year the Board of Directors wanted to expand the tradition by acclaiming the extraordinary peacemaking and peacebuilding efforts of the Knights of Columbus, boldly guided since 2000 by their Supreme Knight Carl Anderson.

Under the 13th Supreme Knight’s leadership, the Knights of Columbus have grown to 1.9 million members in 14 countries across the globe who together last year donated 73.5 million volunteer hours of charitable service worldwide and $175 million. In the last decade, the Knights have given 700 million hours of service and $1.55 billion to charity. They have established a Heroes Fund to help the families of first responders who lost their lives on 9/11; helped rebuild Catholic schools and churches after Hurricane Katrina; gave the gift of mobility to nearly 50,000 people in need of wheelchairs; established the Pacem in Terris Fund to assist the Latin Patriarchate promote peace in the Holy Land; gave nearly a quarter-of-a-million new coats to poor children in the U.S. and Canada; financed the construction of a new national seminary in Cuba; provided prosthetic limbs to over 1,000 victims of the 2010 earthquake in Haiti; printed more than a half-million prayer books for US military personnel deployed overseas; build schools and food distribution centers for AIDS orphans in Kenya and Uganda; place over 600 ultrasound machines in crisis pregnancy resource centers across the US and Canada; and brought hundreds of wounded veterans and military personnel to attend the annual International Military Pilgrimage to Lourdes, France.

In so many ways, he has shepherded the Knights to act in ever more creative ways on the four principles of charity, unity, fraternity and patriotic citizenship for which the Venerable Father Michael J. McGivney founded them in 1882 to foster.

But what the Board wanted to single the Supreme Knight Carl Anderson and the Knights of Columbus most has been for their direct assistance to the victims of violence in the Middle East and their effective advocacy for the recognition of the persecution of Christians and other ethnic and religious minority groups there as genocide. The Knights launched the Christian Refugee Relief Fund, a charitable fund to get missions of dollars of food and housing assistance and other basic necessities for the refugees and internally displaced persons in Iraq, Syria, Jordan and Lebanon. And they have made sure that their cries for help do not go unanswered. Instead they have sought to unite all people of good will in a solidarity of conscience to build a worldwide effort to save the historic, indigenous minority communities of the region.

Last April, at an event sponsored by the Permanent Observer Mission of the Holy See at the UN, Mr. Anderson gave a powerful and unforgettable keynote in which he called the international community concretely to stop the genocide, hold accountable and prosecute those who are commit it, provide relief to those suffering, promote the human rights and dignity of religious minorities in the region, and prepare for the liberation of the region. It was an unmistakable sign of the leadership that the Knights of Columbus are now playing at the international level for peace and humanitarian assistance and of how seriously the Knights take their commitment, as Knights, chivalrously to do all that’s necessary to protect and defend those in harm’s way.

It’s for all of these reasons that the Board of Directors of the Path to Peace Foundation wanted to single out for recognition and emulation the Knights of Columbus and their Supreme Knight with the 2016 Path to Peace Award.

To present the official decree honoring the Supreme Knight and with him all his brother Knights of Columbus throughout the world, I would like to call once again on Msgr. Hilary Franco on behalf of the Path to Peace Board. Please join me in honoring the Knights and their leader, whom I would now invite to address us.