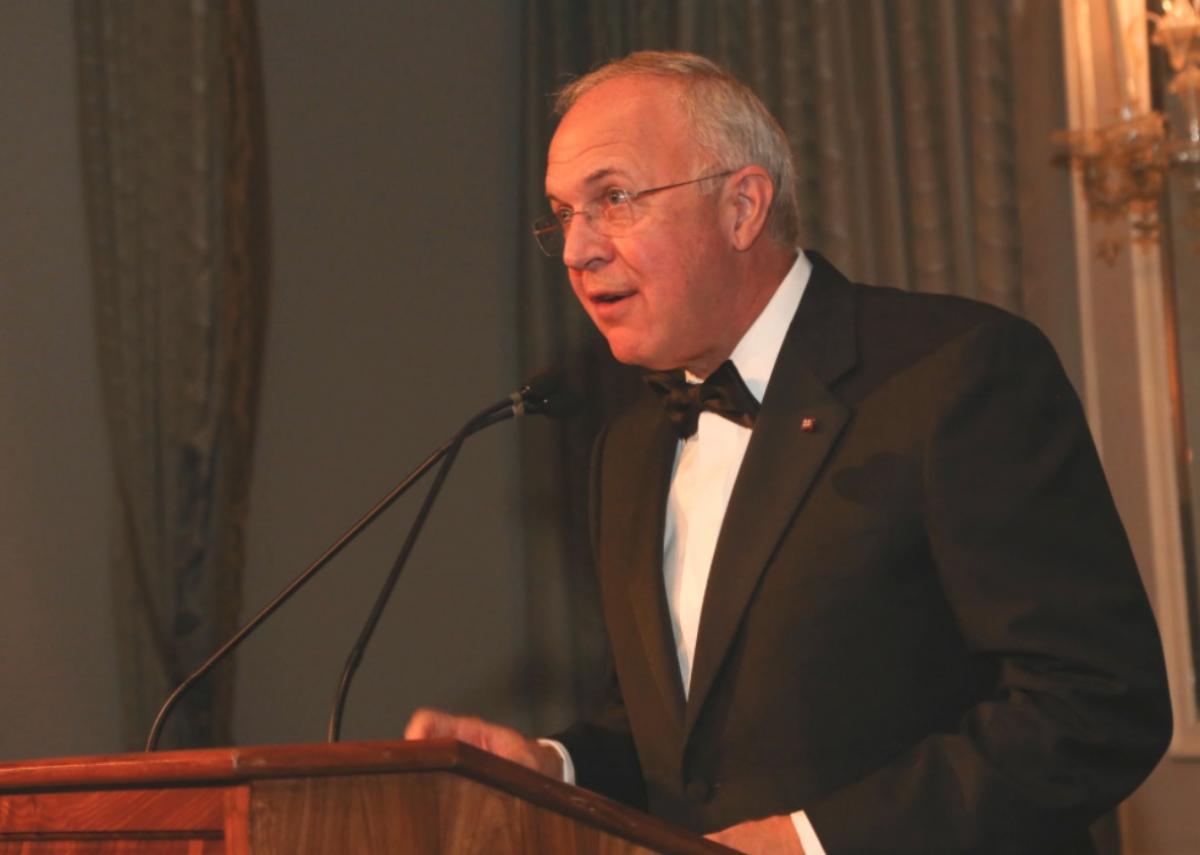 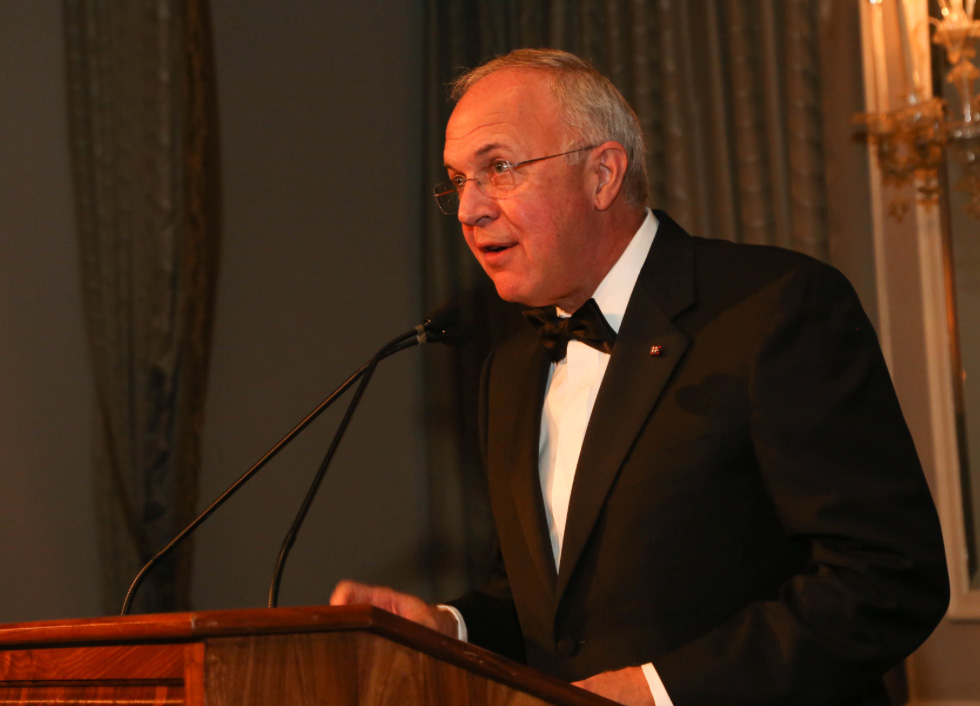 Your Eminence and Your Excellencies, distinguished guests, ladies and gentlemen:

The Knights of Columbus and I are honored to receive the Path to Peace award tonight. But I must say that the ones most deserving of an award, and of all the support we can give them, are the Christians in the Middle East, especially in Iraq and Syria.

The Knights of Columbus came to our work on behalf of these Christians first through charity and humanitarian assistance in 2014. As ISIS began its campaign of destruction, we began a campaign of assistance. With the generous support of our members and the public, the Knights of Columbus was able to direct millions of dollars to those who had been forced to endure or flee this persecution.

As Christians, we understood that our brothers and sisters in Christ who were being killed for their faith by ISIS were martyrs. As citizens, we understood the importance of providing the proper legal definition for this slaughter, and the only adequate legal term was genocide.

Advocating as we were for the use of this term and with solid contacts in the region from our humanitarian work, the State Department came to us and asked us to provide evidence of the genocide facing Christians. We did so, sending one of our team to Iraq to interview witnesses and creating a nearly 300-page report produced with the help of the group In Defense of Christians.

The effort and surrounding public awareness campaign was effective, and Congress – unanimously – and the State Department, have declared the persecution of Christians, Yazidis, and other religious communities in the region, to be genocide.

For the Knights of Columbus, taking action that included humanitarian, advocacy and public awareness came naturally.

We had done the same for Mexican Catholics persecuted by the government of Plutarco Calles 90 years ago, raising the issue publicly, advocating on behalf of the persecuted, and assisting the refugees.

A century ago, we assisted efforts on behalf of the victims of what Pope Francis has called the 20th century’s first genocide – the Christians of Armenia and the Middle East during and following the First World War. The efforts of the American government, in concert with those of American church groups and religious organizations, helped to save religious pluralism in the region at that time. Before World War II, we advocated on behalf of the Jews in Germany.  And during the Cold War, we supported religious freedom for those behind the Iron Curtain.We did the same at home, standing up to the Ku Klux Klan to defend Catholic education, in the 1920s. And in our efforts at home and abroad, we continue this work today.

We do this because we understand that true peace is possible only when the fundamental rights and dignity of every person are respected.  We continue to believe that fundamental human rights must include the freedom of conscience, the free exercise of religion, and equality under the law.

The work of bringing the United States government to recognize the genocide of Christians opened a unique path to peace. In one of the most partisan years anyone can remember, our government spoke in a unanimous and bi-partisan way in support of those being persecuted for their faith in the Middle East.

The recognition that some issues, such as fundamental human rights, transcend politics, may be the first step on a path to political peace in our country.

An even greater path to peace is opened by preserving Christianity – and religious pluralism – in the Middle East.

As Archbishop Jeanbart of Aleppo is fond of pointing out, St. Paul did not convert the Syrian Christians, they baptized St. Paul. And I would add this. They had to forgive him before they baptized him. When asked to visit Paul, Syrian Christian Ananias’ first reaction was to remind The Lord that Paul had persecuted Christians. Ananias had to forgive, then embrace his former persecutor.

For two thousand years these Christians have lived heroically. Pope Francis recently said: “Here lies the secret of [the Christian’s] mission… to proclaim [God’s] love and mercy even in the most resistant areas.”

This is the history of Christians indigenous to the Middle East. They forgive, and by doing so they open the path to peace.

Consider the following examples: A young girl burned to death by ISIS in Mosul told her mother to “forgive them” before she died of her injuries in a hospital. Twelve-year-old Myriam surprised the world when, speaking of ISIS, she told ABC’s 20/20 “Yes I forgive them.” Then she added this: “Jesus said ‘forgive each other, love each other the way I love you,’ that is what we need to learn. Forgiveness." Father Douglas Bazi, who I am honored to have worked with, was held for nine days by terrorists and tortured. They knocked his teeth out and broke his back with a hammer. During this ordeal, he prayed the rosary on the ten links of the chain that hung down from his shackled hands. And in between the torture sessions, he ministered to those torturing him. When one of the torturers asked what Fr. Bazi would do if they crossed paths on the street at some point in the future, Fr. Bazi said, “I will buy you a cup of tea.”

Such witness of mercy and forgiveness stands in stark contrast to the blood feuds and stories of revenge that are far too common in the region. And the importance of the Christian witness of forgiveness has not been lost on their fellow countrymen. Muslim religious leader Ali Al-Yacoubi has noted: “‘Our Christian brothers’ must be thanked for they are an element of peace and coexistence for Iraq, because ‘despite having suffered a lot,’ they have never responded to attacks with violence, but have continued to promote unity in a country that ‘has to be of and for everyone.’” With these words in mind, I believe we stand at a crossroads for the future of Christianity – and pluralism – in the Middle East.

Either Christianity will survive and offer a witness of forgiveness, charity and mercy, or it will disappear, impoverishing the region religiously, ethnically and culturally.

The Christian witness has been profound. And it continues day in and day out in acts great and small. On a trip to Iraq in May, a member of our team was told by a Yazidi family that with the exception of one kilo of lamb delivered in 2014, all of the assistance they have received was from Christians. Though they have next to nothing themselves, we hear reports over and over again of Christians reaching out to care for those with even less.

The Christian witness of mercy and forgiveness is the true path to peace in the Middle East.

It is important that governments around the world – including our own – have recognized that what is happening to Christians is genocide. Tonight we call upon the U.N. to do so as well. It is important to have diagnosed the problem. But it is important that the United States and the international community now provide the cure.

A true path to peace in the region requires the presence of Christians within a pluralistic society in which they are full and equal citizens. This means they must survive, and they must be treated equally.

First, there must be direct funding made available for those communities who are victims of genocide. Both U.S. and U.N. officials in Iraq have confirmed to us directly that they prioritize aid to individuals in the most need, but do nothing for groups – even if the groups have been targeted for genocide and now are in danger of extinction.

The current aid channels have failed. We can no longer rely exclusively or even primarily upon government delivery systems in the region. Steps must be taken to ensure that financial aid is delivered directly to these threatened indigenous communities.  This will require opening new delivery channels and new partnerships with religious organizations.

This was done during and following the First World War, in a public private partnership between the United States government and individuals and religious groups. It could be done again. If it is not done, the genocide begun by ISIS will likely succeed by our own inaction.

Second, with enormous amounts of government and military assistance flowing into the region from the United States and others, we have the leverage to insist that real equality – based on the Universal Declaration of Human Rights – be implemented for religious and ethical minorities.

The regime of second-class citizenship faced by Christians in much of the region before the advent of ISIS, has been seen as the breeding ground for the genocide. We must insist that Christians and other non-majority communities are no longer marginalized.

Dialog is, of course, necessary if we are to make any progress in this regard.  But dialog is possible only when all the participants agree upon the meaning of the words they use.

When we here speak of human rights, we are referencing those rights enumerated in the Universal Declaration of Human Rights.  When governments of Muslim-majority countries speak of human rights, they may be thinking of those rights defined—or as confined—in the Sharia-based Cairo Declaration.  Realism demands that we not mislead ourselves or allow others to mislead us in this regard.

The first step on the path to peace in this region has been taken. Christians have forgiven their persecutors. The second step must be a level of government funding directed to those communities that have faced genocide, so that they, and their witness, can survive. The third step must be the creation of real equality regardless of religious belief.

If we take these steps, we will not only have saved the faith of a people, we will have ensured that their witness of mercy and reconciliation—which is the only authentic path to peace—continues to be a leaven in this region.

Allow me to add one final thought. Earlier this evening, we heard Bishop Habash chant the words of the Our Father in Aramaic – the language Jesus and His apostles spoke. Let us commit ourselves to ensuring that this prayer continues to be said in this language, in the lands Jesus and His apostles walked, until He comes again.