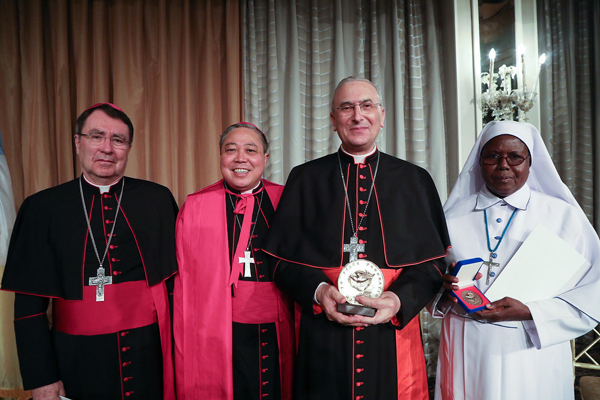 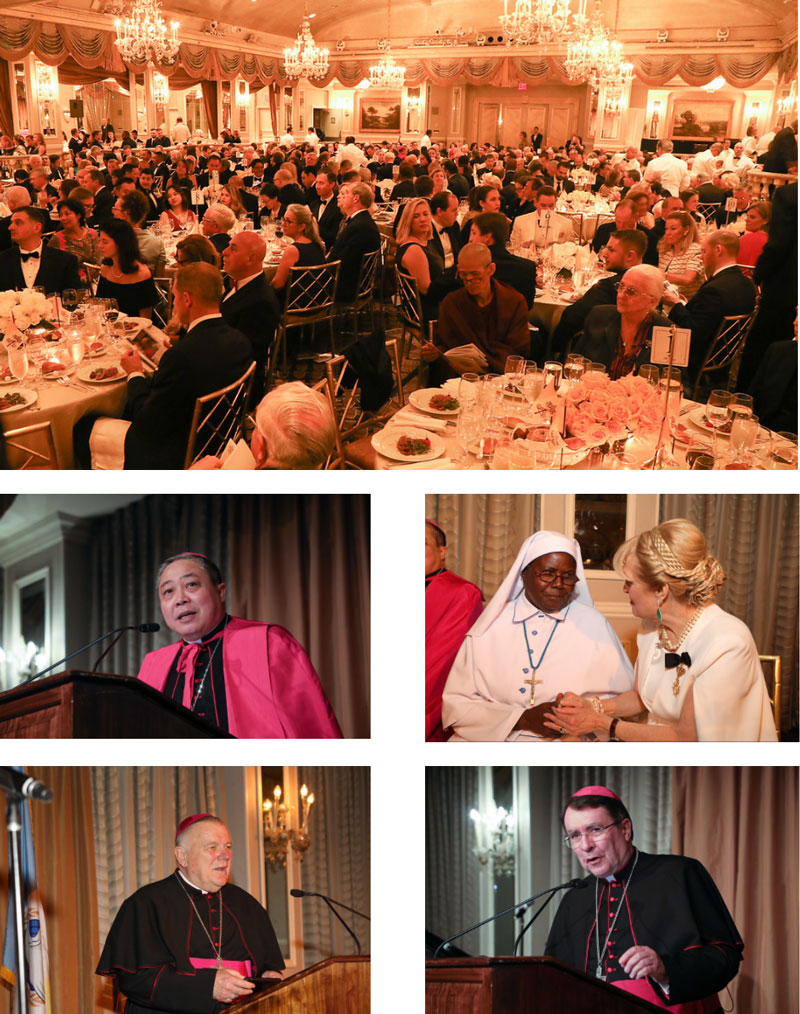 After Co-chairs Erin von Uffel and Mark Ackermann welcomed the guests, Archbishop Thomas Wenski of the Archdiocese of Miami, delivered the invocation.

Before the awards were presented, Bishop Yousif Habash, Eparch of the Syriac Catholic Eparchy of Our Lady of Deliverance of Newark, chanted the Lord’s Prayer in Aramaic, the language that Jesus spoke and that is still spoken among a number of Christians in the Middle East.

Archbishop Bernardito Auza, Permanent Observer of the Holy See to the United Nations and President of the Path to Peace Foundation, described the vital role the Foundation has had in enabling the Holy See's work at the UN since its inception in 1991. Each year at the Gala, he said, the Foundation honors leaders who work as peacemakers who champion people in situations where “tranquility of order, solidarity and social harmony do not reign.”

He said in honoring Cardinal Zenari as the 2017 recipient of the Path to Peace Award, the Foundation wanted to keep a focus on the urgent need for peace in the region where Christianity was first born and spread.

As the Pope’s representative to Syria since 2008, Cardinal Zenari has served the people of Syria during the now six-year war that has directly affected 25 million people. In his acceptance speech, he compared his role to one as a soldier “using the weapons of charity and truth.”

“At times, I feel as if I am dressed like a simple soldier in military fatigues uniform, rather than in clerical attire,” he said. “Spiritually, I feel that I take orders from the 'Commander in Chief,' Jesus Christ, and his lieutenant, the Pope, who tells me: ‘Go there!’ and I go; ‘Come here’ and I come; ‘Stay there!’" and I stay.

Cardinal Zenari said Syria provides daily opportunities to practice what the Church calls “the corporal and spiritual works of mercy,” which include feeding the hungry, visiting the sick and consoling the afflicted.

Among the most afflicted the Cardinal described are the six million children who have endured severe suffering due to the conflict, three million of whom have only known war in their short lifetimes.

“Thousands of parents do not know whether or where to place a flower in memory of their beloved,” he said.

Cardinal Zenari said that in Syria, where the disciples were first called Christians, and St. Paul had his legendary conversion on the road to Damascus, Christians have dropped to only two to three percent of the population, and are among the most vulnerable.

“In Syria the suffering is universal,” he said.  “The whole country suffers: every ethnic and religious group had its victims, its “martyrs,” its places of worship damaged or destroyed. But in terms of vulnerability, the groups most at risk are the minorities, including Christians.”

Despite the shrinking population of Christians, the Cardinal said their presence in the region brings value to the country, both culturally and charitably, noting the 200 million dollars of humanitarian assistance the Holy See and Catholic Church has provided to more than 4.6 million people in the region, and numerous of courageous caregivers who come as religious priests and sisters as well as lay volunteers.

“Amid so many atrocities, in this desert where, all too often, every sense of humanity is lacking, we find unexpected blossoms of rare beauty,” he said, calling them ‘desert flowers.’ “Several hundred people of all faiths and others, moved by profound feelings of human compassion, have given their lives helping those in need.”

Sister Mary Angel Acayo, a sister of the Little Sisters of Mary Immaculate of Gulu, is one such sacrificial servant in Uganda, and was awarded the Servitor Pacis Award for her work to defend women and girls during the Ugandan Civil War and, since 2002, to build a culture of peace that respects women in the Karamoja region of Uganda.

“Pope Francis has called the Church in our time to be like a field hospital in battle, to heal the wounds of those who have been injured,” Sister Acayo said, in her acceptance speech. “That is one of the most important works we can do if we wish to restore and build peace.”

Archbishop Auza noted that in addition to the Path to Peace Award, the Foundation occasionally recognizes unsung heroes who build peace on the ground with the Servitor Pacis Award, Latin for “Servant of Peace.” He said Sister Acayo was an obvious choice for the award after he learned of her work to heal the troubled culture in which men often “claim” women and girls as their brides through raping them. The families’ response is typically to force their daughter to marry her attacker, who is often decades older, because in exchange for their daughter they will receive cows.

She told the story of Grace Achola, whom she and her sisters have served. Achola was kidnapped in third grade in the midst of the Civil War and was held captive as a sex slave for seven years until she was able to escape with the son she bore while in captivity. In addition to helping Achola heal physically and spiritually through counseling, the sisters taught her skills like craft making so she provide for herself and her son. Achola is now happily married to a good man with another child.

“In response to this evil, the Church cannot remain on the sidelines. We must do something,” she said. “It’s going to take a lot of prayer, a lot of work, a lot of healing and a lot of education to change these harmful practices.”

Sister Acayo is now breaking ground on a counseling center called Toto Maria (“Mother Mary”) Counseling Center which will provide a space for women and girls can to receive counseling in privacy. The Center will also provide educational classes for families and tribal leaders to heal the current rape-to-marry mentality. Although the sisters have been conducting many sensitization classes outdoors under trees, the physical building will provide the privacy and prestige needed to reach more in the Karamojong culture.

“These women and girls have experienced so many living nightmares and together we can help them awaken to a new life,” Sister Mary Acayo said. “After the violence that has marked their upbringing, we can help them walk with us on the Path to Peace.”

At the end of the evening, Archbishop Christophe Pierre, Apostolic Nuncio to the United States of America, delivered the final blessing, and remarked on the privilege of being present to witness two of his friends being honored, noting he was a former classmate to Cardinal Zenari in the Holy See’s diplomatic academy and a friend to Sister Acayo during his time as Nuncio to Uganda. Upon leaving the gala, attendees received an icon of Jesus, the Prince of Peace, giving a blessing, or of Mary, the Mother of God, pointing us to her infant Son. The icons were “written" by a Christian family in Syria, whose father was seriously injured in the war.

To view more photos from the Gala, please click here. 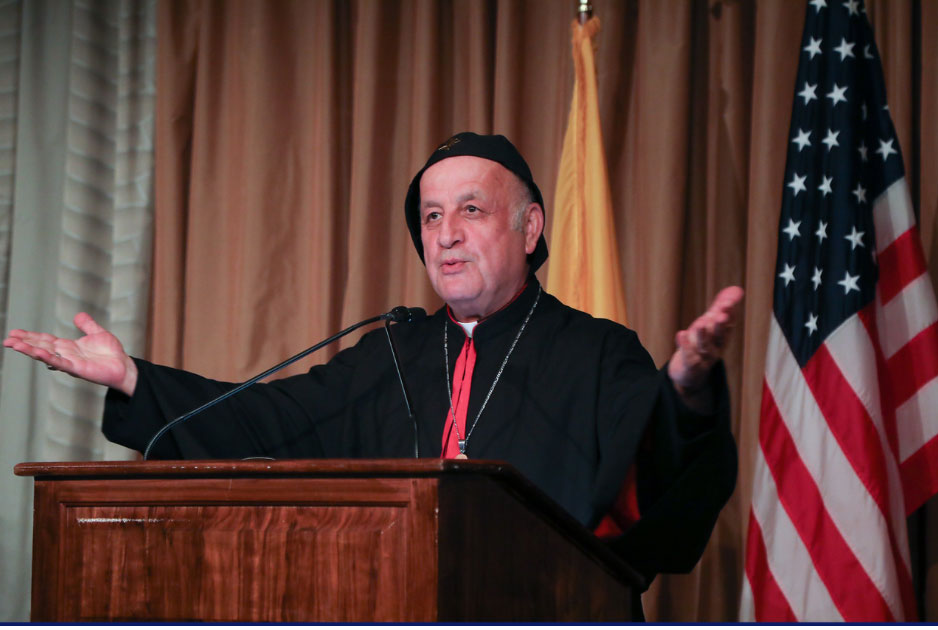