Bringing Accountability, Rehabilitation and Peace to Areas Ravaged by ISIS 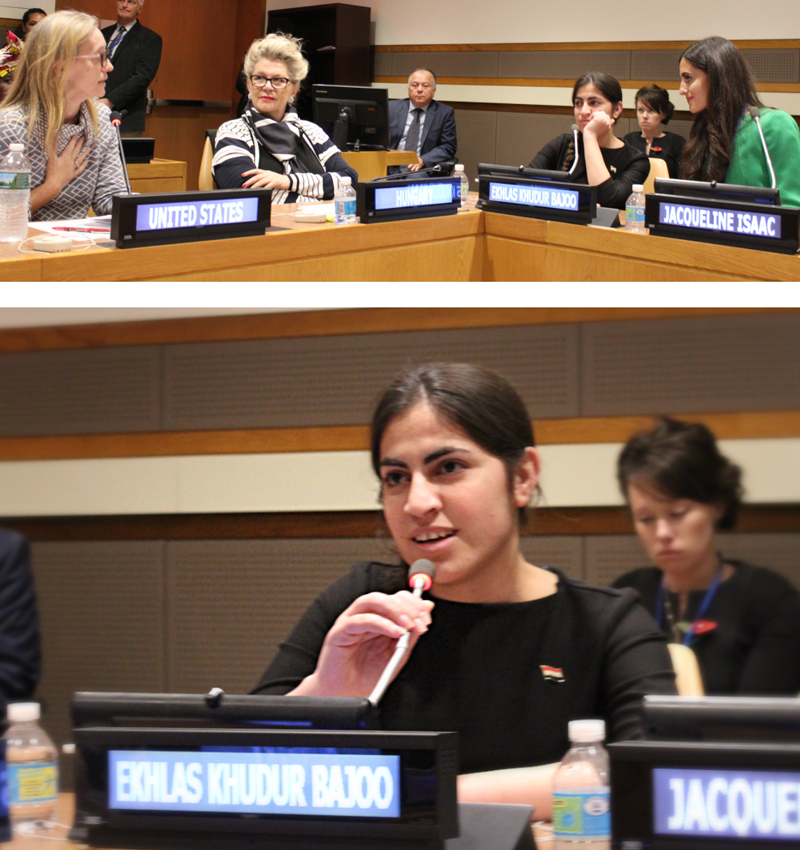 While ISIS may have lost much of its traction in Iraq and Syria, the road to rehabilitation and justice is complex and far from over, according to survivors, experts and leaders at a Holy See sponsored event.

On November 2, the Permanent Observer Mission of the Holy See to the UN hosted an event entitled “Peace, Reconciliation and Justice for the religious and ethnic minorities victimized by Daesh,” together with the non-Governmental Organization (NGO) Committee on Freedom of Religion or Belief and the humanitarian NGO Roads of Success. The event was framed by the accounts of two survivors held in captivity by ISIS and the participation of several UN Member States and NGOs who are committed to the reconstruction of Iraq and Syria and to bringing justice to the victims of the crimes against humanity committed by ISIS.

In his opening remarks, Archbishop Bernardito Auza, Permanent Observer of the Holy See to the UN called upon the International community, along with NGOs and religious leaders, to ensure that ISIS is brought to justice and that its many victims are provided with healing and support.

“While we tragically did not stop their sufferings, we can act to bring justice for them and other victims, help them to rehabilitate and rebuild, and do everything we can to prevent similar barbarity from happening to others,” Archbishop Auza said.

He called upon religious leaders to confront those who pervert religious beliefs to justify violence, contributing to extremist groups like Daesh.

“It’s not enough to defeat, punish, and disband Daesh. We also must eradicate the pseudo-religious, dehumanizing, hateful, and indeed barbaric ideology that motivates it and similar extremist groups,” he said.

Jacqueline Isaac, Vice President of Roads of Success, said her organization has collected stories and evidence from many survivors and relatives of victims who suffered at the hands of ISIS, some undergoing persecution reminiscent of early Christians martyrs, such as crucifixion or being burned alive.

“They asked us to share their stories with the world and to preserve evidence of how their communities were targeted and suffered crimes of rape, torture, and murder.” Isaac said. “They wanted to ensure that their stories of genocide would never be forgotten and never be repeated.” 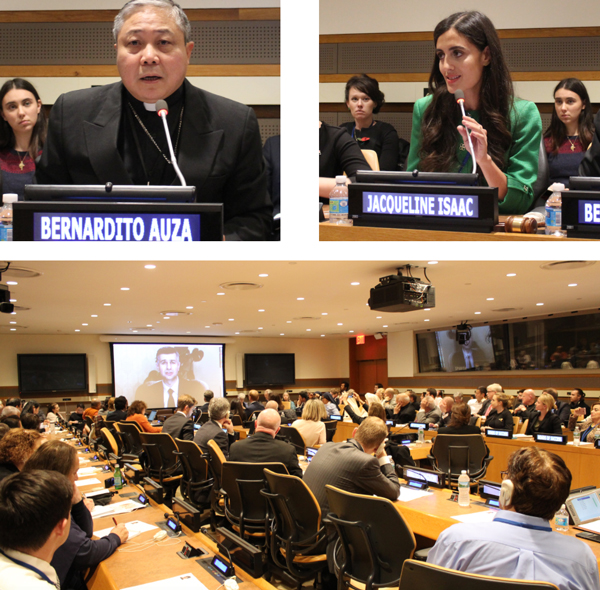 In his video message recounting his almost one month in captivity by ISIS, Gabi, who is now living safely in Europe, wore a disguise to protect his family, whose safety is still threatened in Syria.

After being ambushed on a bus from Aleppo, Gabi and two other Christian men were kidnapped, stripped, robbed, interrogated, held in captivity, and psychologically and physically tortured.

“They started beating and kicking me and afterward they scourged me for an hour,” he said.

About four days into his captivity, he was taken to the village to be beheaded in front of a cheering crowd. Those present were “rejoicing at the killing of an infidel Christian,” he said.

“I knelt and waited for over 10 minutes to be executed,” he said.

Moments before his execution would take place, the leader allowed him to instead pay what was called the jizya, or tax imposed on non-Christians, but which ISIS uses as a form of extortion. Days later, blind-folded, hands tied, and an explosive belt tied around his waist, Gabi received his ransom and was finally freed.

After watching ISIS murder her father, Ekhlas Khudur Bajoo, a now seventeen-year-old Yezidi survivor from Iraq, was kidnapped by ISIS when they raided her village in August 2014. She faced rape and humiliation every day during her six-month captivity, and was sold as a sex slave.

She experienced beatings after each of her three failed attempts to escape, but on her fourth attempt freed herself from her captors.

“I promised myself after that day that I would not stop until I brought justice,” Bajoo said. She has previously shared her testimony at the UK House of Commons to persuade them to acknowledge that ISIS’ persecution of Christians and Yezidis was genocide.  “I am fighting for all women, not just Yezidi women but for all women of all religions and all groups who are victims of ISIS.”

“We want justice and accountability for those perpetrators who raped me and my sisters and took our honor,” Bajoo said. “Come and hold my hand. I plead with you to stand with us. We want to feel humanity wipe our tears, to heal our wounds, to bring back the smiles on our faces, and to bring back the girls that are still in captivity.”

All of the Ambassadors who participated in the panel expressed their wish to stand with Eklhas, some even physically taking her hand.

The United Nations Security Council on September 21, 2017 unanimously passed Resolution 2379, to establish an investigative team to gather evidence and pursue accountability for the atrocity crimes perpetrated by ISIS in Iraq.

Ambassador Mohammed Hussein Bahr Aluloom said that the Resolution will help bring justice to the many Iraqi groups ISIS violated.

“Ekhlas is representing all the survivors of the atrocities of ISIS, whether in Iraq or outside Iraq,” Ambassdaor Aluloom said. “The culture, religious and ethnic diversity of Iraqi people represents a priceless heritage that Iraq aims to preserve.” He also noted the government of Iraq is working toward a recovery and rebuilding program to resettle all those who have been displaced.

“You have all of your honor and Daesh has none of it, and we are honored to hear you today.” Ambassador Jonathan Allen, the Deputy Permanent Representative of the UK said to Ms. Bajoo, in response to her testimony. “This truth that we hear that makes us ever more determined to take action.”

Gathering evidence is the first step of a longer process towards justice. Ambassador Allen said while Iraq and Syria have been most impacted by ISIS, members of the terrorist group come from nearly every country, and the entire international community will need to work together to hold the perpetrators accountable.

“The UN adopted the Resolution unanimously. This is an issue that unites us all, and I call us all to stand together and ensure there is no hiding place for those who have committed these terrible crimes,” he said.

Physically holding Ms. Bajoo’s hand, Ambassador Katalin Bogyay, the Permanent Representative of Hungary to the United Nations, told the survivor that her testimony sparks the international community’s vigor to bring justice for the many victims of ISIS.

“We have to rebuild the lives of survivors: their homes, schools, hospitals and sacred spaces, to put their lives back on track,” Ambassador Bogyay said, noting the millions of dollars in aid Hungary has provided to support long-term and sustainable solutions for those violated by ISIS in several Middle Eastern countries.

“It is our honor to stand with you and demand accountability and justice for the horrific crimes that have been committed against you and others like you,” Ambassador Kelley Currie, the United States representative to the Economic and Social Council of the United Nations, told Ms. Bajoo. “Despite recent and welcome gains against ISIS, they pursue their campaign of violence,” she said, highlighting the new initiative the United States has begun to assist ethnic and religious minorities who have been persecuted by ISIS Iraq, including Christians and Yezidis, by giving aid directly to those organizations helping them on the ground. 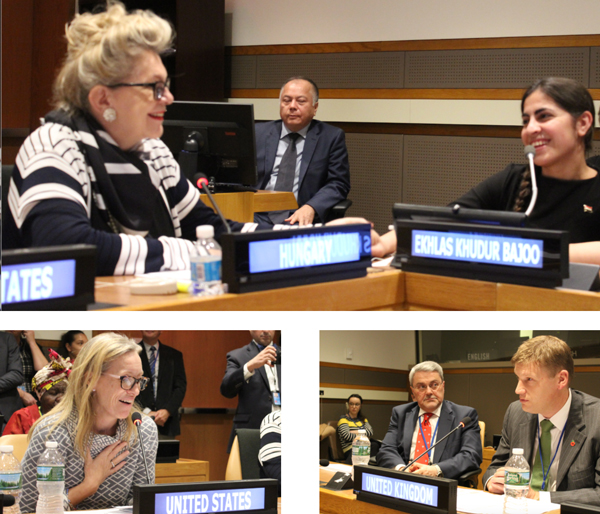 Edward Clancy, Director of Outreach at Aid to the Church in Need USA said his organization is working to support Christians in Iraq to return home to the Nineveh Plain, where 40 percent of Christians in Iraq lived before ISIS invaded.

“In what now seems to be the post-ISIS period, we are assessing the most urgent needs of the Christian areas,” he said, remarking that his organization has given 65 million dollars in aid and is working to establish long-term vitality for Christians by building homes, schools and hospitals, and investing in economy boosting projects, like micro-loans and business programs. They are calling their long range hopes a “Marshall Plan for the Nineveh Plain,” for which they are trying to raise $250 million.

In a video message, Dr. Nezar Ismet Taib Abdullah, Regional Director of Health in Dohuk, Iraq said that for the displaced Iraqis to return home, they will need to be provided with safety and security.

“They should feel confident they will not be attacked by another terrorist organization,” Dr. Abdullah said.

Michael Farris, President and CEO of ADF International, said that while Daesh seems to be crumbling, it is essential to protect the religious freedom that the UN was founded upon to ensure Daesh -and groups like it- do not gain traction again.

“There is a danger that we would feel the temptation to fly the victory banner too early, to think that the mission is soon to be accomplished,” he said. “Nothing could be further from the truth.”

Humanitarian work on the ground is of upmost importance to aid Christians and Yazidis in their resettlement and rehabilitation, he stated, but to ensure the atrocities and genocide committed by ISIS never occur again, the world must pay attention to even smaller instances of violations against religious freedom, which are often precursors to greater atrocities, such as the genocide committed by ISIS.

“No one should, on the basis of religion, be denied the opportunity to speak publicly about her beliefs, gather publicly with people of like mind, form legally recognized organizations and groups, own property, run businesses, stand for elected office, or engage in any of the other innocent activities regularly permitted to citizens,” he said. “The laws that protect freedom of religion are not meaningless, and now is the time to prove it.”

Archbishop Auza's statement can be found here.
To watch the event in its entirety, click here.