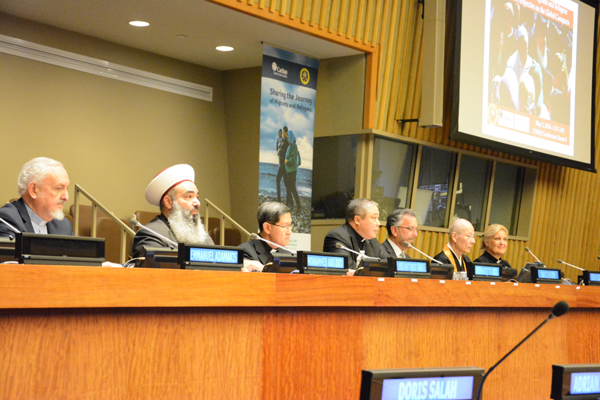 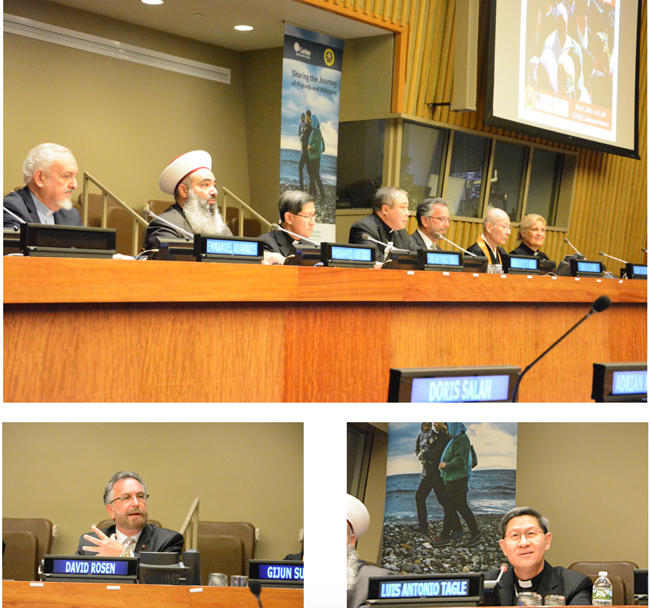 On May 3, the Permanent Observer Mission of the Holy See to the United Nations, together with Caritas Internationalis and its Share the Journey Campaign, hosted a Conference at the United Nations in New York entitled “Sharing the Journey of Migrants and Refugees: An Interfaith Perspective on the Global Compacts.”

The panel discussion included religious leaders from a variety of faith traditions who spoke of the perspective their respective religions hold regarding migration, and how faith-based groups rooted in their traditions respond to the summons to come to the aid of migrants and refugees. The event was situated within the ongoing intergovernmental negotiations and consultations toward Global Compacts on Migrants and on Refugees taking place at the UN in New York and Geneva. It is the hope of many of the religious leaders present that their integral work for migrants and refugees will be recognized by the international community in the outcome documents that result from these negotiations.

Archbishop Auza, Permanent Observer of the Holy See Mission to the United Nations, said that faith-based organizations are often the first-responders for migrants and refugees in need.

“Migrants of particular faiths have a trust for their faith institutions and sometimes well before they are able to access services provided by governments and international organizations come to the churches and charities of their faith tradition for basic needs support,” Archbishop Auza said. “Faith based organizations are not only relevant but crucial to the help of migrants and refugees and also to the work of States in caring for them.”

Archbishop Auza called for the vital role faith based organizations play to receive explicit reference in both Global Compacts.

“They often fill gaps in services to migrants that governments, and other civil society actors, are incapable or unwilling to fill on their own,” he said.

Cardinal Luis Antonio Tagle,  Archbishop of Manila in the Philippines and President of Caritas Internationalis, launched the Share the Journey Campaign with Pope Francis eight months ago, an initiative that puts the Holy Father’s four-verb motto into action, which is to welcome, promote, protect, and integrate migrants.

“Migration is about human persons. They have human stories and dreams,” Cardinal Tagle said. “By denying the humanity of a migrant or refugee, we reveal our own lack of humanity.”

While the organization cares for migrants and refugees throughout the world with many programs, Cardinal Tagle suggested that sometimes the best care is to enable a person to choose not to migrate at all.

“People have a right to migrate, but they also have a right not to migrate,” Cardinal Tagle said, emphasizing the need to eradicate the root causes of forced migration such as violent conflict and social and economic exclusion so that men, women and children will be free to stay in their country of origin instead of feeling forced to take arduous journeys where they must face the challenges of adapting to a new place, culture and language." 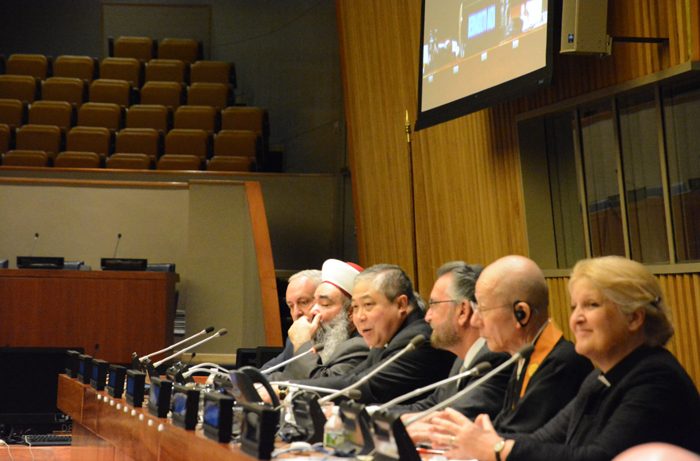 His Eminence Metropolitan Emmanuel Adamakis of France echoed Cardinal Tagle’s call for combatting the root causes that lead to forced migration. He described the several layers of suffering and marginalization that migrants and refugees typically endures as they escape political unrest, poverty, climate related disasters, and war.

“Because of these factors, we are currently facing the largest humanitarian crisis since the Second World War,” he said. “And the face of the migrant is increasingly a youthful face. For the first time in history half of all refugees are children and youth.”

Rabbi David Rosen, International Director of Interreligious Affairs for the American Jewish Committee, said that Judaism has an ancient history as migrants that informs the religion’s teaching to help others in vulnerable situations.

“Our experience of marginalization and even demonization led to the most terrible systematic barbarism that human society could conceive,” Rabbi Rosen said. “This eternal painful memory demands of us even greater solidarity with and support for migrants and refugees so that they are not the victims of the violence as we have experienced it.”

Honorable Judge Mohamad Abou Zeid, Senior Judge in the Family Court of Saida (Lebanon), where approximately half of the residents are refugees, said that even though migration can sometimes be an economic or political burden, Muslims have a responsibility to welcome, respect and share with migrants and refugees based on the teachings from the Quran, the Hadith and the history of migrations in Islam.

“Islam specifically teaches us to look at displaced people as blessings from God sent to us to prove our belief in God,” he said, adding that Islam also imparts specific responsibilities and teachings for the migrant.

“Islam teaches the immigrant to be in cooperation with the hosting community, respecting their traditions, customs, and religions,” he said.

Venerable Gijun Sugitani, Head Priest of the Tendai Buddhist Myohoin Monzeki Temple and Chairperson of Religions for Peace Japan, an organization thathelps build bridges between religious and ethnic groups by facilitating interreligious dialogue and projects said that his organization is currently taking in and integrating Syrian refugees in Japan in an interfaith context.

“The refugees are young pious Muslims but are welcomed at Buddhist facilities and supported in going about daily life in Japan by Christian and Shinto leaders.”

Moustafa Aldouri, who migrated to the United States as a teenage refugee after being kidnapped and tortured by extremists in Iraq, was once a recipient of the services offered Catholic Charities and now works for the organization as a Refugee and Immigration Services Case Manager, something he said demonstrates the contribution migrants and refugees provide to their host community.

“I worked three jobs along with going to college just to help my family,” Aldouri said. “The moment I felt I was on my feet, I wanted to help and give back to the community and now I have been working for Catholic Charities for a year helping anyone I can help.” 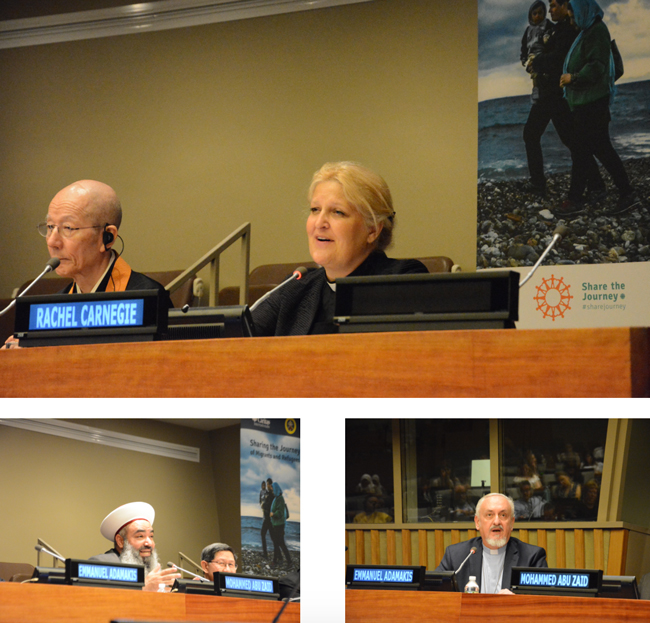 Reverend Rachel Carnegie, Co-Executive Director of the Anglican Alliance, said that the diverse panel shows that faith based groups fulfill a unique and expansive role in caring for migrants, suggesting that while talks on migration  and refugees can often times be divisive among different parties, the question of migration is often a unifying issue for religious groups.

“This was not a series of statements on what others can do, but on what we can do together,” Reverend Carnegie said, calling attendees to “keep the image of a migrant or refugee known personally to us actively present in our minds” as the discussions and negotiations for the Global Compacts continue. 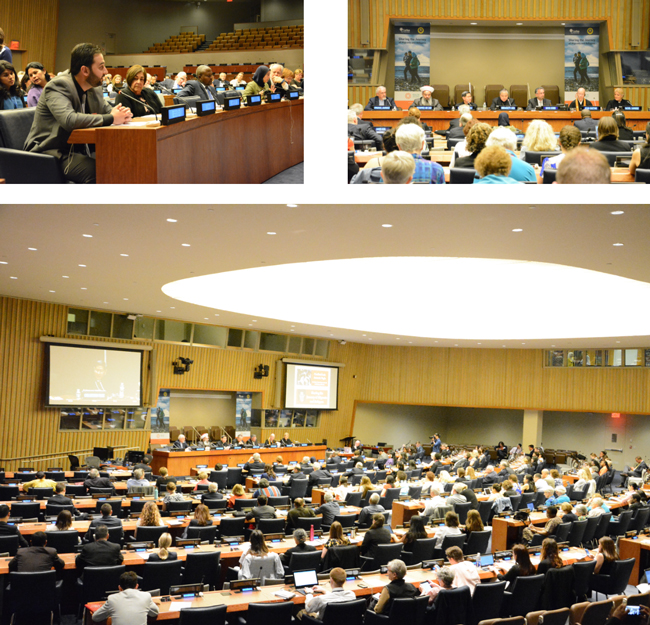