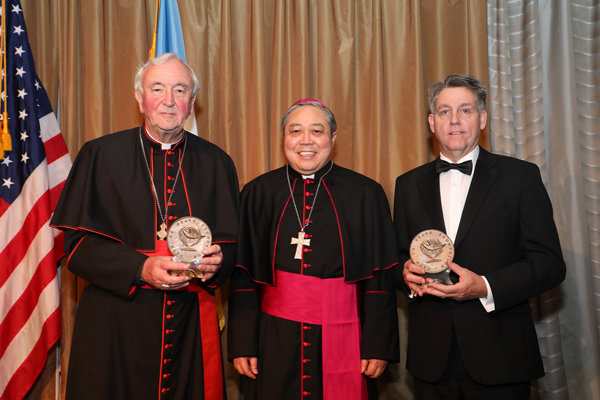 At the 2018 Path to Peace Gala, held May 23 at the Pierre Hotel in New York, Cardinal Vincent Nichols, Archbishop of Westminster, and Mr. Kevin Hyland, the Independent Anti-Slavery Commissioner of the United Kingdom, jointly received the Path to Peace Award on behalf of the Santa Marta Group, the international alliance of police chiefs and Church leaders collaborating to eradicate human trafficking and all forms of modern slavery.

Archbishop Bernardito Auza welcomed the 560 guests of the Gala and said that the Path to Peace Foundation had chosen to honor the Santa Marta Group because it is “making such a difference in the fight against the plague of trafficking in persons and all forms of modern slavery, which according to the most accurate estimates presently ensnares 40.3 million people — 40.3 million girls, boys, women and men — in situations of forced labor and sexual exploitation. Pope Francis has called it a ‘crime against humanity, … an atrocious scourge that is present throughout the world on a broad scale, even as tourism.’”

The Santa Marta Group takes it name from Pope Francis’ residence in the Vatican. It was there that, in April 2014, police chiefs from around the world stayed for a Vatican conference that culminated in a joint declaration, called the Santa Marta Commitment. In it, the senior law enforcement officials pledged themselves to work together on an international level to eradicate human trafficking, specifically through developing partnerships with the Church and civil society in order better to prevent trafficking in the first place, provide more holistic care and reintegration for survivors, and bring to justice those who are responsible for these abusive crimes.

Cardinal Nichols in his remarks shared the story of two people who impacted him to commit himself to the cause of ending modern human slavery. The first was a young woman named Sophie who had been trafficked in the United Kingdom and whose sufferings opened him up to the scale of the problem close to home. The second was Pope Francis, who personally asked him after the April 2014 conference to make sure that the cooperation between clergy and law enforcement grows.

He focused his remarks on the two things he thinks are needed for the collaboration between “cops and clergy” to succeed. The first is trust, because in the past religious helping trafficking victims were afraid that if they cooperated with law enforcement, the victims would just be treated as criminals because they had often been involved in prostitution or forced to take drugs to become addicted. The second is honesty, about what is working and not working, he said.

Cardinal Nichols expressed appreciation for the work of the Permanent Observer Mission of the Holy See to the United Nations for all of its work  against human trafficking.

Commissioner Hyland described the various situations of modern slavery in the world and the many ways that anti-trafficking work is making a difference. He made an appeal for others to get involved, saying that he has been making an effort to have the G20 countries become party to the ILO conventions against forced labor, but said that as of now, only three of those 20 countries have signed it.

Archbishop Auza described how “Pope Francis loves the Santa Marta Group,” and said that it has achieved a great deal during its four years of existence.

“Even though the approaches of law enforcement and of the Church to human trafficking certainly differ, Pope Francis insists that they ‘can and must go together. Cooperation between bishops and police chiefs is decisive.'”

Similary, the Archbishop Auza added, “Law enforcement officials have noted, on their part, that to fight a world-wide plague, they need a world-wide network of those prepared to identify, build trust among, and restore victims and that’s why for them an alliance between police and the Catholic Church makes so much sense.”

He added, “Both the Pope and law enforcement leaders note that such collaboration is an inspiring sign of the type of partnerships needed across the board if we are ultimately going to be successful in the fight to eradicate modern slavery.”

Archbishop Christophe Pierre, Apostolic Nuncio to the United States of America, gave the opening invocation, soliciting much laughter when he said that he had nothing to do with the Gala’s being held in the grand ball room of a hotel bearing the name Pierre.

The Gala was chaired by Steve and Lee Paolino and emceed by Mark Ackermann and Vicki Downey.

To see more photos from the event, please click here.