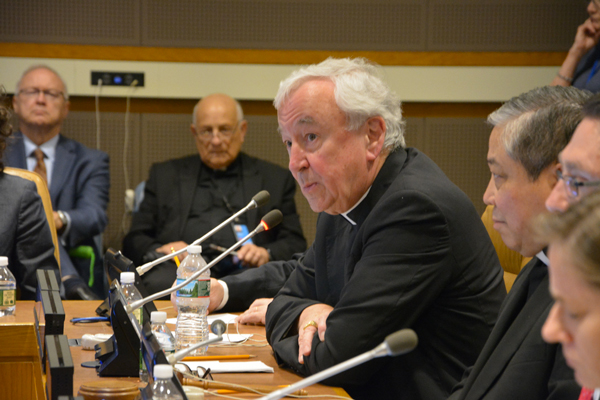 Partnerships are required to end human trafficking, according to experts at a  May 22 Holy See sponsored Event at the United Nations entitled, “The Santa Marta Group: Police and Religious Leaders Partnering to Eradicate Modern Slavery by Building Trust in Leadership, Action and Accountability.” Co-sponsored by the the Santa Marta Group, the event highlighted the results borne from the fruitful relationship between faith-based groups and law enforcement.

The conference was held in anticipation of the Path to Peace Gala, where the Santa Marta Group was honored for its efforts in building partnerships between religious groups and law enforcement.

The Santa Marta Group takes its name from Pope Francis’ residence in the Vatican where police chiefs and senior law enforcement from around the world stayed in April 2014 for a two-day conference on eradicating human trafficking that culminated in a joint declaration, called the Santa Marta Commitment. From this conference arose the Santa Marta Group, a network of religious groups and law enforcement committed to working with one another to eradicate the criminal activity of trafficking and to care for its victims.

Eradicating human trafficking and modern slavery is a major priority for Pope Francis, according to Archbishop Bernardito Auza, Permanent Observer of the Holy See to the UN, who noted that the Pope has addressed the Santa Marta Group on several occasions, praising their work as an “essential contribution to addressing the causes and effects of this modern day scourge,” which has achieved a great deal in a short time.

Archbishop Auza said that for several years, the UN has been deeply involved in the fight against human trafficking, leading to various international commitments, protocols, compacts and goals aimed to eradicate the scourge, such as the three targets in the 2030 Agenda for Sustainable Development.

“These and other similar commitments are really important, but they’re not enough. They need to be followed up with action on the ground,” Archbishop Auza said. “The Santa Marta Group is one of those groups collaborating on the ground to make these international commitments consequential.”

The Santa Marta Group works toward ensuring that all victims of trafficking are rescued, receive proper care, and that their traffickers are penalized under the rule of law.

Cardinal Vincent Nichols, Archbishop of Westminster and President of the Santa Marta Group, said that the keystone principle of the group is upholding the human dignity of each person, and keeping the victim at the center of their work. In its four years, the Group has expanded to include partnerships between police and religious group in 34 countries.

He attributed the Santa Marta Group’s success not merely to its international reach, but to the quality of personal relationships at the local levels. It is common for trafficking victims to carry feelings of betrayal and distrust, especially toward police officers. The relationships of trust that develop organically between those who have been trafficked and the religious groups that serve them place the religious in a natural position to help the survivors build the courage to prosecute their persecutors and help get them behind bars. Distrust between religious workers and police had to be addressed as well.

“The religious sisters who worked with victims were sure that the police would see them not as victims but as criminals,” Cardinal Nichols said. “They had to be sure that the police were not interested in prosecuting victims, but wanted to get to the perpetrators of the crimes. Step by step, trust was built.”

At the Bakhita House in London, in which religious sisters accompany victims of human trafficking on a journey towards healing, several survivors have testified against their traffickers in court, which has led to their perpetrators’ receiving in some cases more than 40 years in prison.

When Commissioner Kevin Hyland, the UK’s first Independent Anti-Slavery Commissioner and a leading member of the Santa Marta Group, was the head of the Scotland Yard's Human Trafficking Unit, his team frequently found success working with religious sisters.

“What we quickly saw was not only did it change those in modern slavery, it changed the attitude of the police and helped them understand that by being more compassionate, you can get better results,” Commissioner Hyland said.

Commissoner Hyland credited the Santa Marta Group with influencing the UK’s Modern Slavery Act, which was still in formation at the time of the Group’s founding. The Act called for an Independent Anti-Slavery Commissioner as well as a victim-centered approach.

Commissioner Hyland also credited the inclusion of Sustainable Development Goal 8.7, which calls for an end to human trafficking and modern slavery, to the unique relationship between Argentina, the UK and the Holy See working together to make eradicating human trafficking a global commitment.

“This is a group of action,” General Commissioner Nestor Roncaglia, Chief of the Argentine Federal Police, said of the Santa Marta Group after attending its 2016 conference at the Vatican. He said that Pope Francis, long before he became pope, had a special compassion for victims of this crime as Archbishop of Buenos Aires, and shared memories of then-Cardinal Bergoglio caring for people from all walks of life.

“The victims go towards the church because they are hurt, but the international criminals will continue to run loose without the work of the police.” Commissioner Roncaglia said. “As police, it is assumed that we should address the criminal first, but in the case of trafficking, we are rescuing the victim.”

Dr. Hillary Chester, Associate Director of Anti-Trafficking for the United States Conference of Catholic Bishops (USCCB), said that the Catholic Church has been engaged in anti-trafficking work in the United States before “human trafficking” was defined as a legal term. Partnerships between law enforcement and faith-based groups are vital to successful work.

“We realized that none of us had enough expertise and knowledge to tackle this individually, so we had to work in partnership,” she said, noting that the U.S. Department of Justice favors a collaborative model to fight trafficking. “Now the Santa Marta group is taking that idea globally and sharing best practices.”

One aspect of the USCCB’s work is to educate officers on the border to screen children at risk of trafficking, since migrants are at a high risk for being trafficked.

One of the most important tools in the fight against trafficking is “recognizing the inherent gifts and strength of people we serve,” she said, noting that the greatest partners in ending trafficking are often members of communities most at risk for trafficking.

Sister Melissa Camardo, Director of Development for the Lifeway Network in New York City, which has provided housing to 84 trafficking survivors from 34 countries, said that her top priority is to help the women she serves regain their sense of self-worth and build happy and healthy lives amidst the feelings of fear and betrayal that are so commonly held by trafficking survivors.

“Building trust is slow and careful work,” she said. “Many have been abused, traumatized and tortured by people who were supposed to love them, even their family.”

Lifeway Network provides more than food and housing, but true accompaniment, especially for those who find the courage to share their stories with law enforcement to prevent others from suffering at the hands of their former traffickers.

“Sometimes they are triggered by PTSD in these meetings, so they need to come to a safe place,” she said. “We may attend court proceedings with them or just provide comfort or consolation in any way we can.”