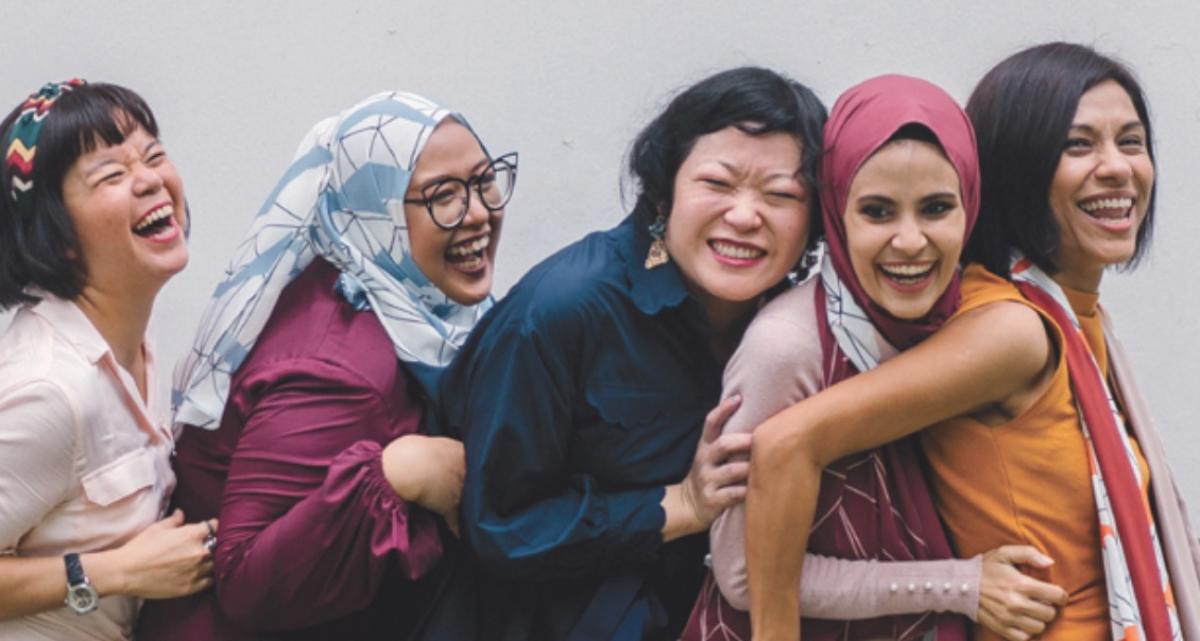 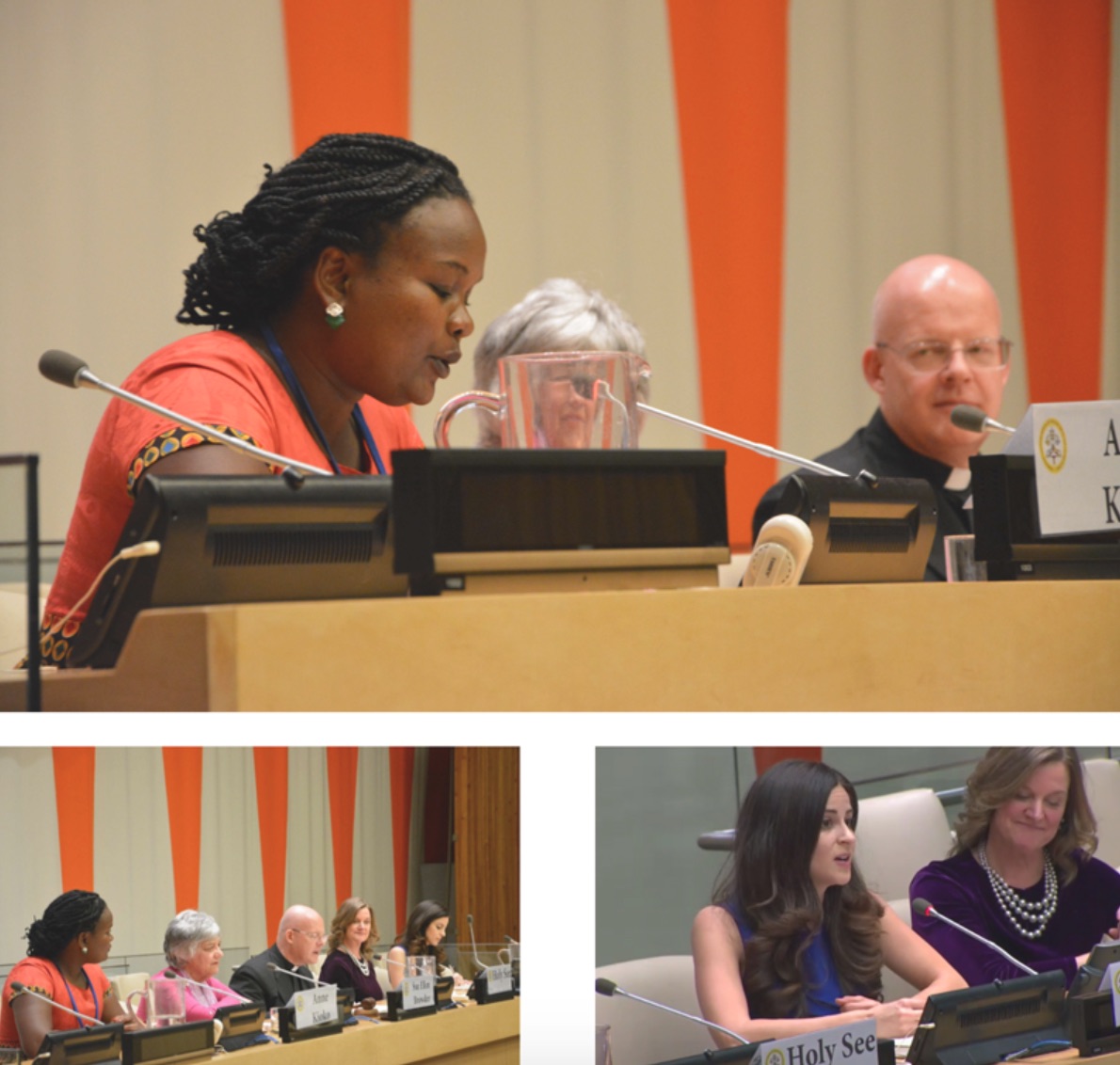 On March 19, the Permanent Observer of the Holy See to the UN held an entitled “Protecting Femininity and Human Dignity in Women’s Empowerment and Gender Equality Policies Today,” during the 63rd Session of the Commission on the Status of Women (CSW), together with the Center for Family and Human Rights.

Archbishop Bernardito Auza, Permanent Observer of the Holy See to the United Nations, said in remarks delivered by First Counselor Msgr. Tomasz Grysa, that practical considerations concerning access for women and girls to social protections, public services and sustainable infrastructure all rest on a proper and holistic anthropology of women, not understanding her solely as an economic actor. He questioned whether the documents and discussions for the 63rd session of CSW have focused too exclusively on the economic dimension of woman's life.

“We must ask whether these ideas are truly respectful of women as women, whether they truly encompass what women most deeply desire, or whether they are trying to make women more competitive according to masculine ways of ordering life, society and economic realities,” he said.

True respect for women, he said, starts with reverencing her according to all aspects of her humanity, including her capacity for marriage, motherhood and family life.

“We need more than words condemning all forms of unjust discrimination against women,” he said. “We need more than social protections, access to public services and sustainable infrastructure that allow women to take up work outside the home or even to enable them to meet their families’ needs without needing to sever their maternity from their femininity.” We need a real campaign to promote her according to all aspects of her feminine genius, including the maternal meaning of her femininity, he said.

Sue Ellen Browder, author of Subverted: How I Helped the Sexual Revolution Hijack the Women's Movement, worked for  Cosmopolitan Magazine in 1971, and said that in the early 60s the feminist movement and sexual revolution were completely different movements.

Even Betty Friedan, the "mother of the modern women's movement” who launched second-wave feminism in 1963, didn’t even mention abortion or contraception in the first edition of her book The Feminine Mystique and called Cosmopolitan "quite obscene and quite horrible,"  for pushing the sexual revolution.

“What Betty and other feminists were fighting for had nothing to do with whom you sleep or how you have sex.  They were fighting for equal opportunity for women in academia and the workforce,” Browder stated, revealing that once she was fired for being pregnant.

Cosmopolitan propagated the sexual revolution, even if it were not a true reflection of the lives of women at the time, Browder said. She revealed that writers would make up stories and sources about the sexual revolution to promote the idea that it was “good to sleep with your married boss, good to take the Pill, good—or at least necessary—to have an abortion to get ahead.”

“You couldn't find these women,” she said. “And that's why, when I was working at Cosmo, we made most of those stories up about the sexual revolution. There was even a list of ‘rules' on how to make up stories and how to make up experts.”

“We all agree women should be treated with equal dignity and respect,” she said.  “We all agree women should have the right to vote. The real war on women going on in the world is the false joining of feminism with the sexual revolution,” which Browder said happened at a National Organization for Women conference on November 18, 1967, in which Betty Friedan finally capitulated to the fathers of the pro-choice movement: Larry Lader and Dr. Bernard Nathanson, the two founders of the National Abortion Rights Action League, now known as NARAL Pro-Choice America.

Many of the women in the close minority walked out of the room and later resigned from the organization over the abortion issue, Browder states.

Dr. Susan Yoshihara, a former U.S. Navy Commander and combat logistics helicopter pilot, gave firsthand insight into challenges she faced being accepted by her mostly male counterparts. The sexual revolution did not make her experience easier, and subjected her to sometimes demeaning experiences.

“Integration was made harder by the sexual revolution. The assumption is sometimes made that we enter non-traditional jobs to be a man or to sleep with them,” she said, recounting a condescending experience in which a captain would not believe she could remain true to her views on chastity in sexual morality. “On the contrary, we bring something to the table that men cannot.”

“Women are told they must strive to break glass ceiling,” she said, but said the gifts she brought as a woman made her better at her job and revealed the fulfillment women can find through “small acts of kindness we can find under that ceiling on our way up to it.”

Lila Rose, President of Live Action, a nonprofit dedicated to ending abortion and inspiring a culture that respects all human life, also highlighted the harm the sexual revolution has had on women’s advancement in society, particularly the promotion of abortion.

“Unfortunately, while the Western World secured the same legal rights for women as men, it also invented false rights, namely abortion, and expectations for women that have harmed our well-being and future. Women are expected to behave like men in the workplace, despite the reality of their biological differences and the special sacrifices that being a mother entails.” Rose said. “Our differences to men should  be celebrated and championed and not seen as a barrier to advancement,” she added, noting that promoting abortion for women’s advancement disempowers women and pressures women to view their fertility as a threat to their advancement.

She also noted that sex selective abortions are common throughout the world, and that 27 million girls have been killed globally through abortion.

“We need to stop viewing fertility as a sickness to be treated,” she said. “Children are our future and we need to develop polices that support children and our future.”

Anne Kioko, founder and director of the African Organization for the Family, spent most of her life in a village in the Nyandarua aberdares in Kenya. She argued that western cultures have been pushing the ideology of the sexual revolution in less developed nations, to the detriment of African women. Kioko said that pushing an agenda of access to abortion and contraception onto women and girls in developing countries has been prioritized by Western countries and organizations, while the local women need, rather, policies and programs that include access to high-quality education, clean water, and healthcare that can heal malaria.

“When abortion is prioritized for women like those in my country, it is not the woman we are protecting, it is the bloodthirsty abortion industry,” she said. “In 2014, a survey showed that 82 percent of Kenyans are opposed to abortion, yet abortionists have created sensationalistic statistics to try to brainwash international bodies that we need to legalize abortion.”

“As I sit in many events here [during the Commission on the Status of Women], the same organizations that do such damage in my country are present here, pretending to represent women at the grassroots,” Kioko said. “It is time we brought more women from the villages to the table to inform you about what they want and what they need. It is not abortion, contraception or the sexualization of children. None of these leads to woman’s true empowerment. The women carrying the water cans, the women carrying their daughters on their backs to distant, insufficiently equipped medical centers, the women struggling to receive a solid education for themselves and their families, will tell you they need true empowerment, and that it is time the social protection agenda of the UN reflected this.”

The event was held in a packed Economic and Social Council Chamber. 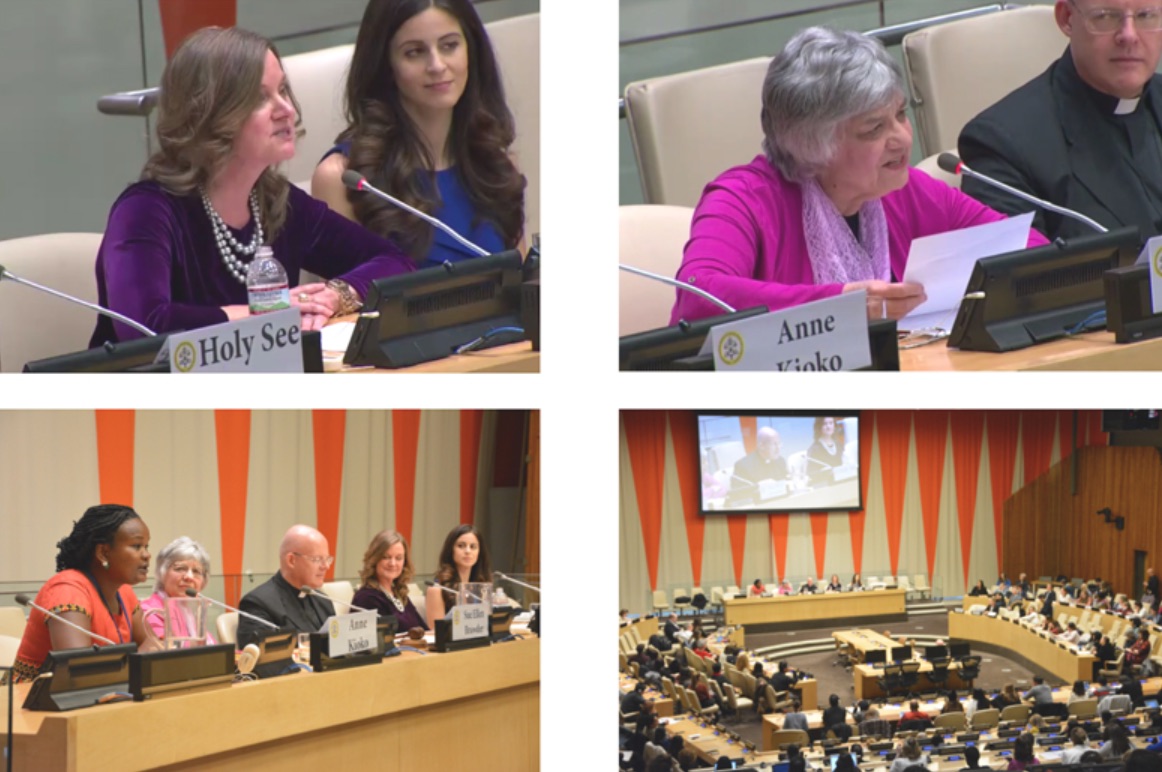 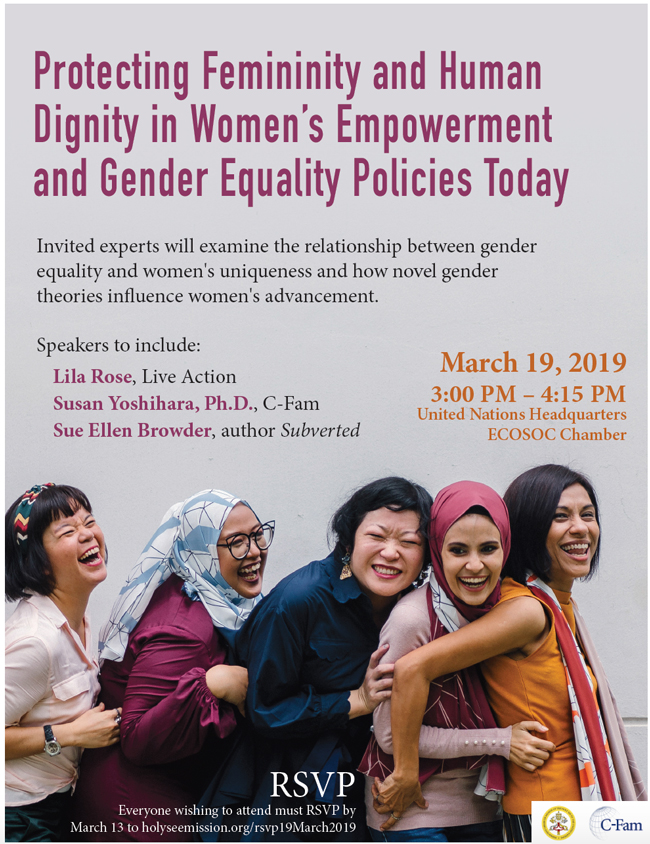