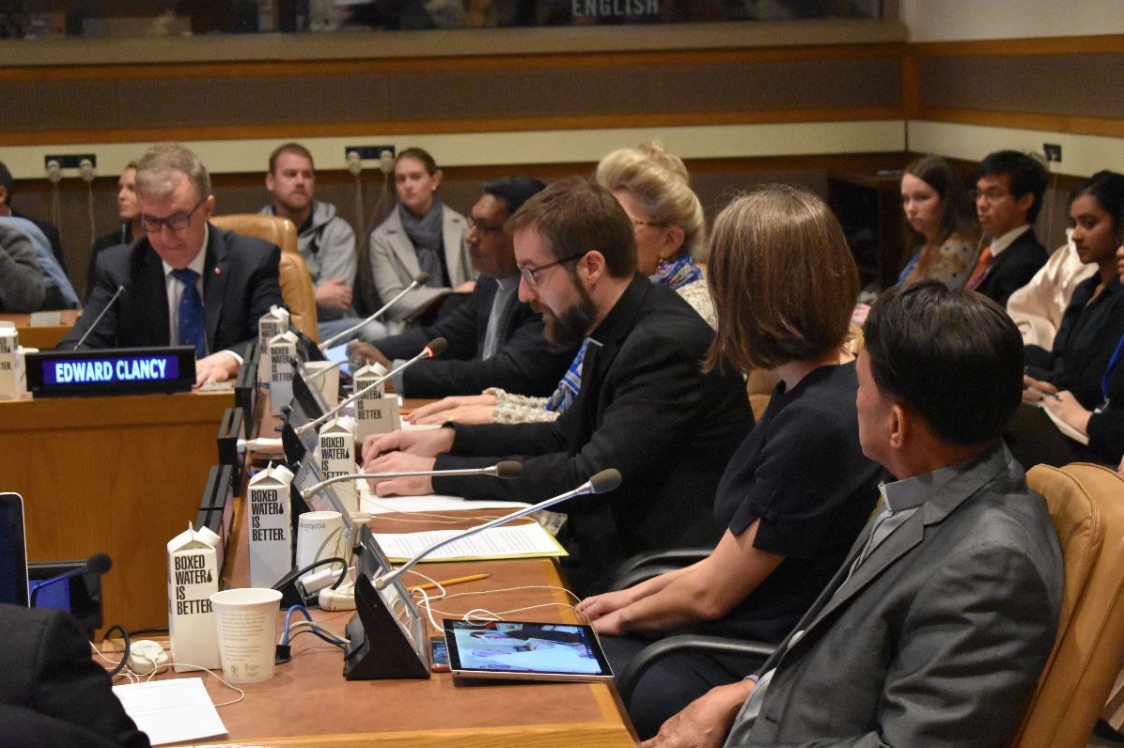 Listening to Survivors of Religious Persecution: The Call to Religious Freedom

He recounted his first-hand details the Easter Sunday bombings in his country in Conference Room 7 on November 20 at UN headquarters, as individuals persecuted for their religious beliefs shared, with simplicity and bravery, profound and shocking testimonies of survival after extreme violence and loss perpetrated by extremist ideologies. They were participating in an event sponsored by the Permanent Observer Mission of the Holy See to the UN and Aid to the Church in Need USA, entitled “Listening to Survivors of Religious Persecution: The Call for Religious Freedom.”

Survivors and representatives of permanent missions to the United Nations spoke with a sense of urgency about the plight of religious minorities.

On Easter Sunday morning, April 2, Fr. Fernando recounted, the Catholic faithful had gathered for 8 am Mass. The explosion went off, as he entered the main gate of the church. “I ran towards the church and saw dead bodies strewn across the floor. There were many body parts, heads, legs, and hands, moistening the church floor with blood. There was lamentation and screaming of the people looking for loved ones. It was such a horrible sight.”

He spoke of the pain of losing people whom he had known and ministered to personally for a long time. “In the following days, my brother priests and I began visiting the homes of the survivors. We already knew the families before the bombings and their family members who had died.” The funeral processions took place under strict guard as the people were still under threat. Fr Fernando explained that although this was the most significant attack against the Christian community in Sri Lanka, there have been other lesser-known instances of Christian persecutions and harassment, particularly since the end of the war in 2009.

“Our people need healing,” he said, and “we priests are doing the best we can to accompany them through their pain.” Christians have, until recently, lived harmoniously side by side with their Muslim brothers. In recent times, however, he said, extremists are seeking to provoke a conflict between Muslims and Christians. “We must not allow this to happen,” he warned.

Despite the suffering, there remains a strong and recurring message of forgiveness and hope. “The prayers and support of people throughout the world, have emboldened us to carry on and give witness of light over darkness, love over hatred, and life over death” so that “those who have lost so much are yet so full of trust in God” explained Fr. Fernandez,

Monsignor Fredrik Hansen of the Holy See Mission noted that in a world in which there is a disturbing rise in discrimination, persecution, and attacks based on faith, this event was giving a voice to those who had experienced first-hand what happens when respect for religious freedom breaks down. “Their stories will be hard to hear, but their voices need to be heard,” he said.

Ambassador Katalin Bogyay, Permanent Representative of Hungary to the United Nations, shared Hungary’s efforts to defend persecuted religious minorities and religious freedom, a priority that Ambassador Cherith Norman Chalet, Chargé d’Affaires a.i., of the Permanent Mission of the United States to the UN, said that her country shares.

Ambassador Bogyay spoke about the efforts of her country to defend those who are vulnerable to attacks against their religious freedom, especially Christians who have been persecuted and forgotten. Hungary is working to promote a more vigorous respect for religious freedom where it is threatened. “We have heard the voices of those in need and have been in close contact,” she said.

During the past five years, the Permanent Mission of Hungary has worked together with other Missions to organize a series of events to highlight the situation for minorities persecuted because of their faith. “Here in the United Nations, we really have to be the strength and support of all these people in the world.” She stressed the need for the international community to work together to protect minorities and their "holy lands.”

Ambassador Bogyay spoke in particular about the plight of Yazidis and Christians in Iraq, and outlined the practical initiatives of her government to help persecuted Christians. The program "Hungary Helps" provides humanitarian assistance to communities in crisis situations and has, in the past three years, donated more than $35 million, $5 million has been given in scholarships to students from the Middle East and Sub Saharan Africa to study in Hungary, and more than 70,000 internally displaced people and refugees have been able to return to their ancestral homes or to not leave in the first place, she stated.

Ms. Chalet noted that the conversation about religious freedom at the UN has become more inclusive, with a greater recognition of the persecution Christians and other minorities. She said she is glad to see that governments are working together to protect this fundamental right. The October 2 Symposium on Pathways to Achieving Religious Freedom jointly hosted in Rome by U.S. Embassy to the Holy See and the Vatican on the need to promote religious freedom and human dignity is such an example. The work of United States Commission on International Religious Freedom and the International Religious Freedom Alliance highlights further the resolve of the United States “to ensure that all ethnic and religious communities in the region receive the assistance they need to live in safety and dignity.”

To the survivors of religious persecution present, she reaffirmed the United States commitment to them and thanked them for their testimonies. “We are greatly inspired by your bravery, strength, and resilience,” she said. “America’s commitment to religious freedom will never waver,” she said, “We stand with you and for you.”

Mr. Edward Clancy, Director of Outreach at Aid to the Church in Need USA, pointed out that, although we are seeing a rise in violence against all minorities, it is Christians that bear the majority of persecution worldwide. He cited figures from their biannual report Persecuted and Forgotten, A Global View of the Persecution of Christians that showed that some 300 million Christians are undergoing various forms of persecution because of their faith; one out of seven Christians lives in a country where believing in Jesus comes with the risk of displacement, arrest, human rights violations, and even death. Open Doors puts the number of Christians murdered for their faith in 2018 alone at more than 4000, and estimates that at least 11 Christians are killed every single day in the 50 worst-offending countries.

Mr. Clancy highlighted dismal statistics about the situation for minorities in the Middle East, where the survival of Christianity in its ancient heartland is under perilous threat. “There were over 1.5. million Christians in Iraq before 2003, but by mid-2019 that figure had fallen to well below 150,000, a decline of more than 90 percent in a single generation.” The story is similar in Syria, where the size of the Christian populations has fallen by two-thirds since the start of the country’s civil war in 2011. The work of faith-based agencies, like Aid to the Church in Need, has supported Iraq’s Christian community in its darkest hour.

He spoke of the urgent need for the international community to spearhead a global effort to ensure tolerance and pluralism and to put an end to the harsh realities faced by minority Christians living not only in the Middle East but in Africa as well as Asia. “Western governments must consider the growing trend and destabilizing impact of religious persecution around the world” and must “step up the use of diplomatic, economic and, as a last resort, military power to come to the aid of persecuted believers,” he said. 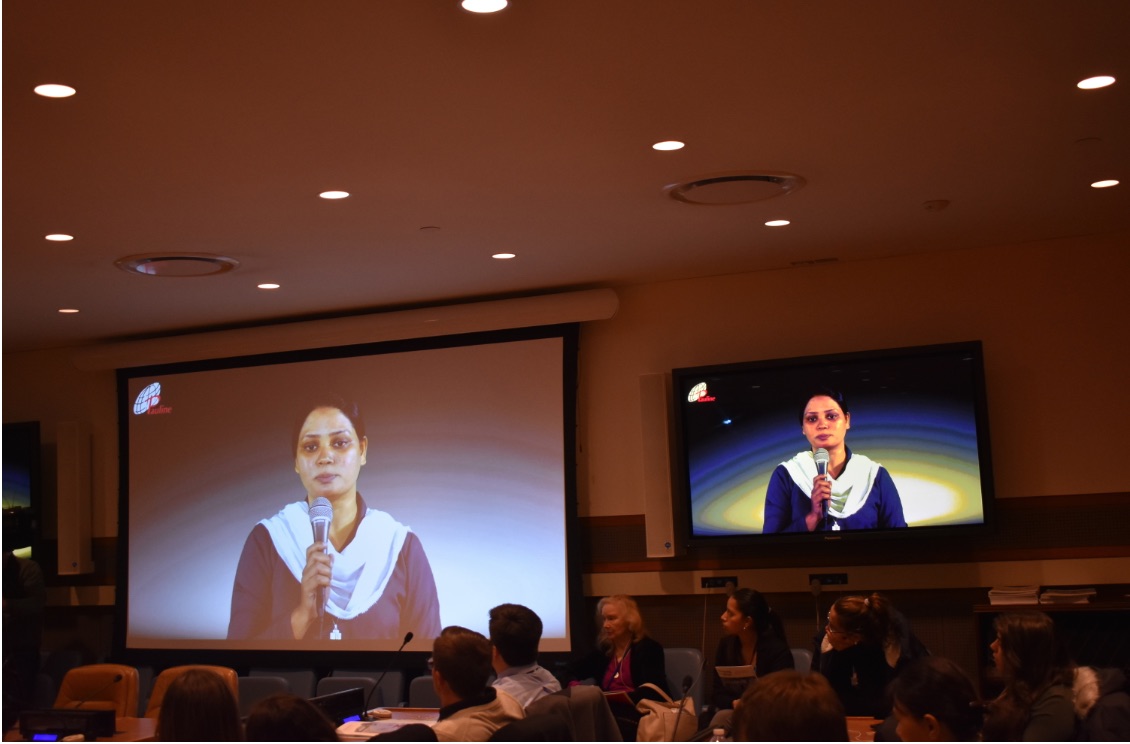 Monsignor Romeo Saniel, Apostolic Administrator of the Vicariate of Joyo in the southern Philippines, said he has seen more than his fair share of violence perpetrated against minorities for their faith, having himself experienced surviving an attempt on his own life by teenagers in his home province. Three of his fellow Oblates of Mary Immaculate were kidnapped, tortured, or killed; his bishop was shot in front of his cathedral, two priest friends were abducted, tortured and killed. After surviving the assassination attempt, he has devoted himself to work tirelessly for interreligious dialogue.

“To witness to Jesus and the values of Christianity amidst persecution is easier said than done,” Saniel said.

He discussed the context and the drivers of terrorism in his region of the Philippines, Mindanao and Jolo. The roots of Jihadism should be understood against the backdrop of the 40-year-old separatist conflict that has killed more than 120,000 people, displaced millions, and yet has failed to find a political solution; an environment where youth, poor and lacking quality education, are vulnerable to radicalization and recruitment. The Catholic church has responded to this crisis by establishing schools and social development initiatives, interreligious dialogue, that teaches peaceful coexistence between  Christian and Muslims.

Sister Ghazia Akhbar, a Catholic religious sister of the Daughters of St. Paul, made her address via video link from Lahore, Pakistan. She spoke about the desperate situation for Christians, many of whom live in poverty and subjected to violent persecution and discrimination. “The situation of Christians in Pakistan is heartbreaking,” she said, "and suffering is most severe in remote communities." Sr. Ghazia recounted many stories of persecution, violence, and terror faced by Christians in Pakistan. Anti-blasphemy laws are being used to target Christians, she said. The infamous case of Asia Bibi, who was falsely accused of blasphemy, brought the abuse of these laws to the world’s attention. Accusations of blasphemy against Christians can easily trigger mob violence. Between 1990 and 2017, 23 Christians died in such violence.

Sr Ghazia recalled the horrific case of a young couple, Shabhaz Maseeh, 26, and his pregnant wife, Shama Bibi, 24, who were already the parents of three children and who worked as bonded laborers in Punjab province. The couple, almost beaten to death, was then burned alive in an industrial kiln after being falsely accused of burning pages of the Koran. Five of the perpetrators of the crime were sentenced to death, yet just last year, 20 of the assailants were acquitted, including the local imam, who had spurred on the mob through a loudspeaker at the mosque.

Most cases of violence against minorities go unreported due to fear, hostility and death threats. The kidnapping and forced conversion of Christian and Hindu girls ages 9 to 15 isanother reality that is getting worse by the day, she noted. In Punjab Province, 700 girls have been abducted just in one year. “Culturally, politically and legally, Pakistani Christians are regularly treated like second-class citizens,” she said. Minorities, she said, have been ostracized and banished to society’s lower rungs, often discriminated against in employment, education, and housing. Those who speak against the status quo risk paying a high price, such as Pakistan’s former Minister for Minority Affairs, Shabaz Bhatti, the only Christian in the Pakistani cabinet at the time, who was assassinated after seeking reform of the blasphemy law. Yet, despite the plight faced by Christians in Pakistan, Sr. Ghazia remains deeply patriotic and loyal, adding that “we Christians love our country, our mother soil, with a true spirit of patriotism marked by a spirit of love, loyalty, sincerity, and purity. We are working for Pakistan’s development, for the betterment of the country, and  are willing to sacrifice our lives.” 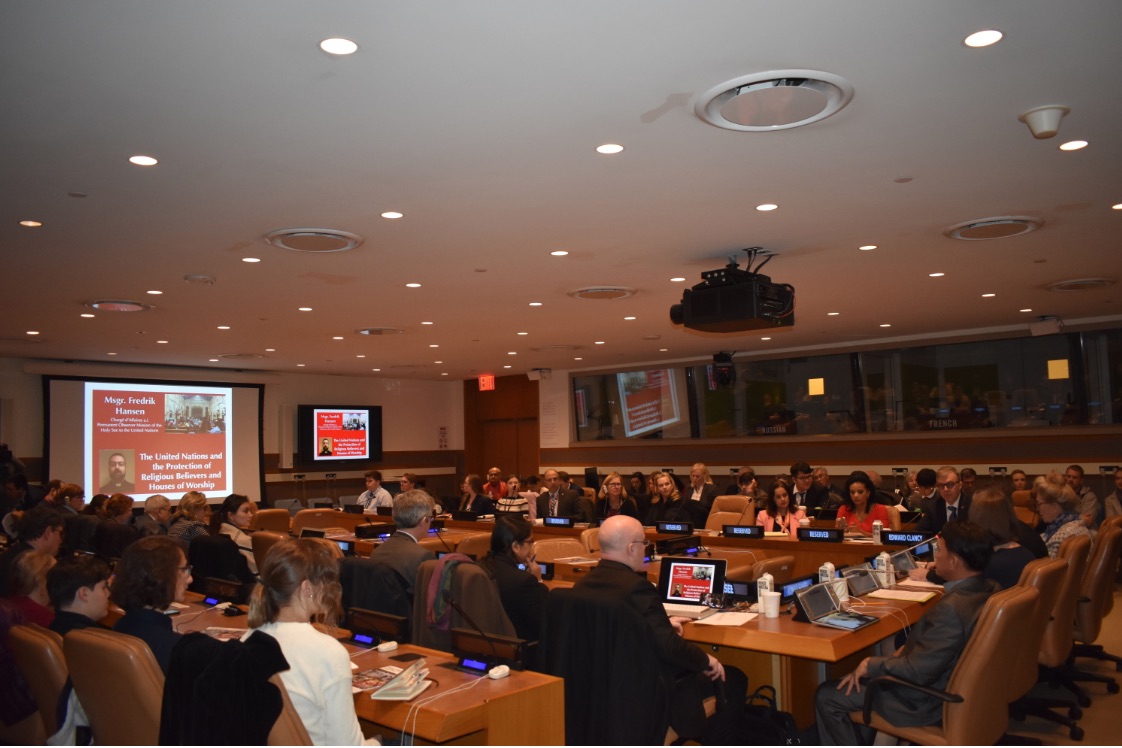 The event highlighted the urgent need for dialogue and understanding so that communities can live in peace and draw courage from all those who heroically continue to worship when others would seek to do them harm. "We must derive inspiration from the champions of the fight for religious freedom. Above all, we must try to create a culture in which mutual reverence, solidarity, and fraternity remain,” Msgr. Fredrik Hansen said.

To watch the event in its entirety please click here: 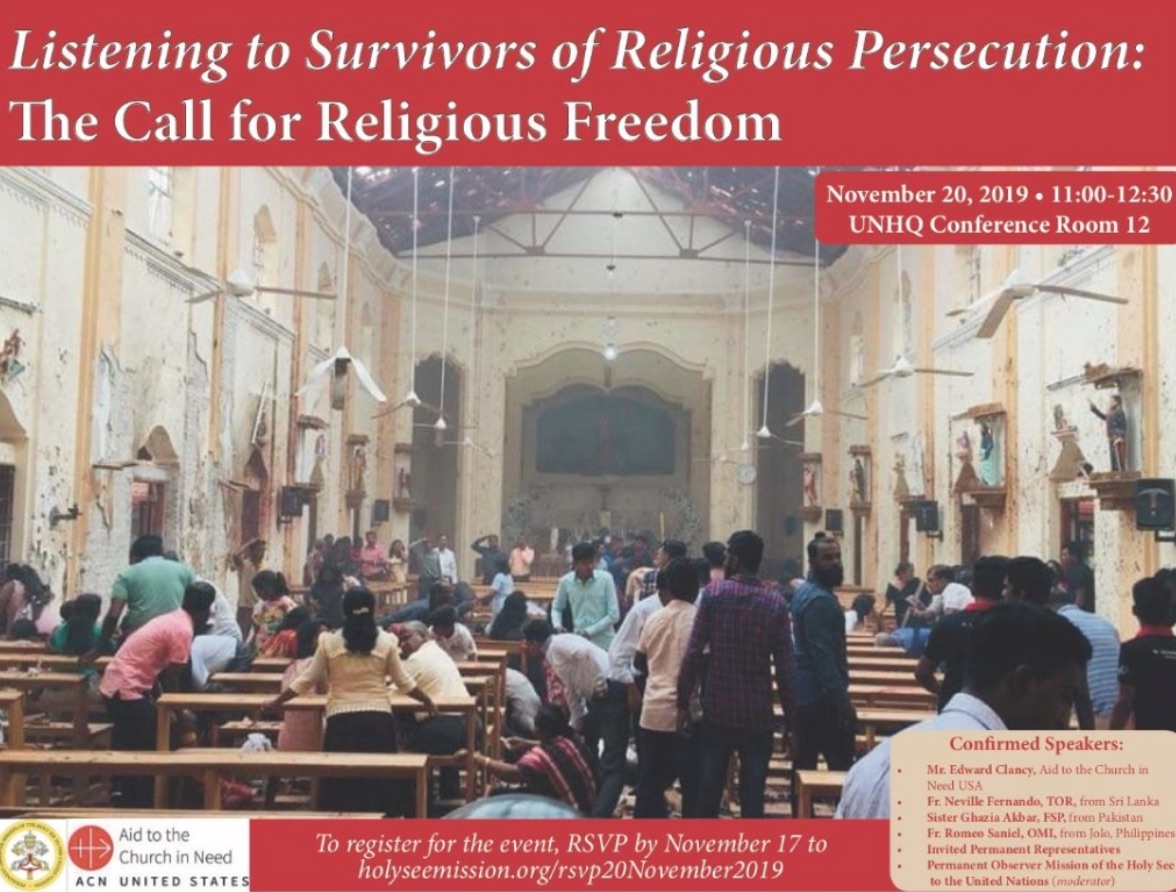