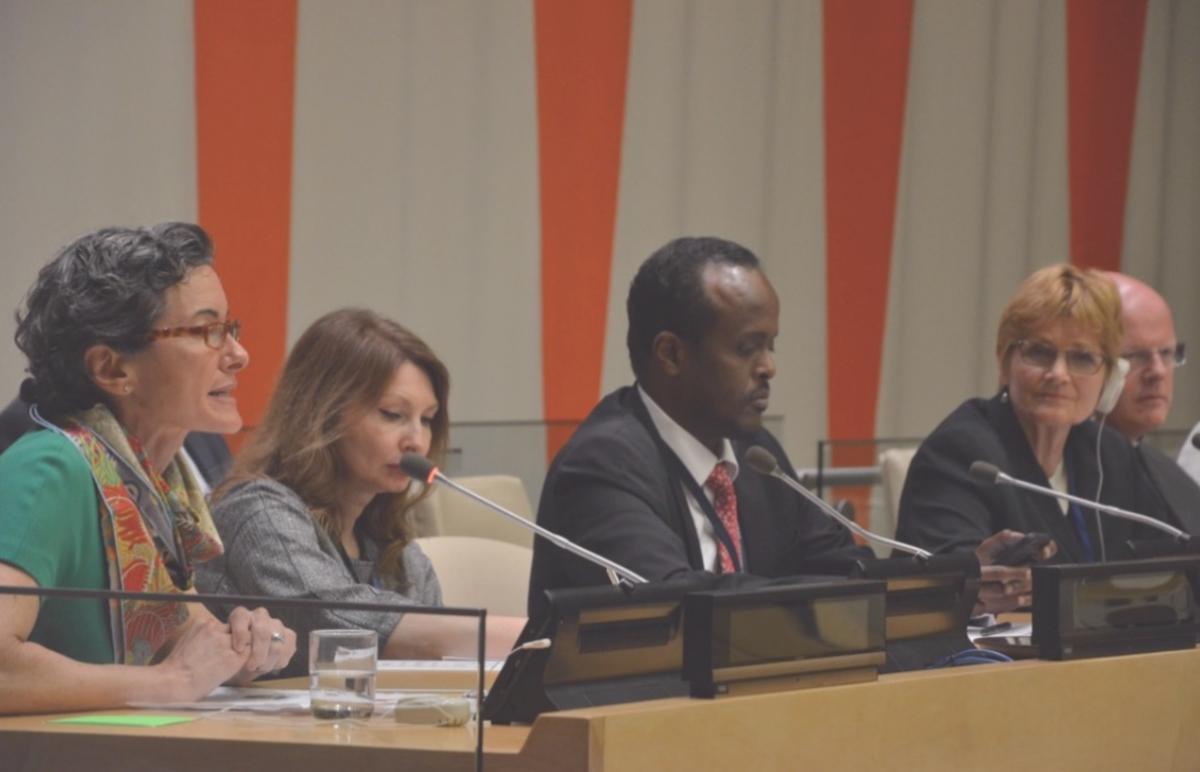 Good Parenting Builds Society: The Importance of Motherhood And Fatherhood 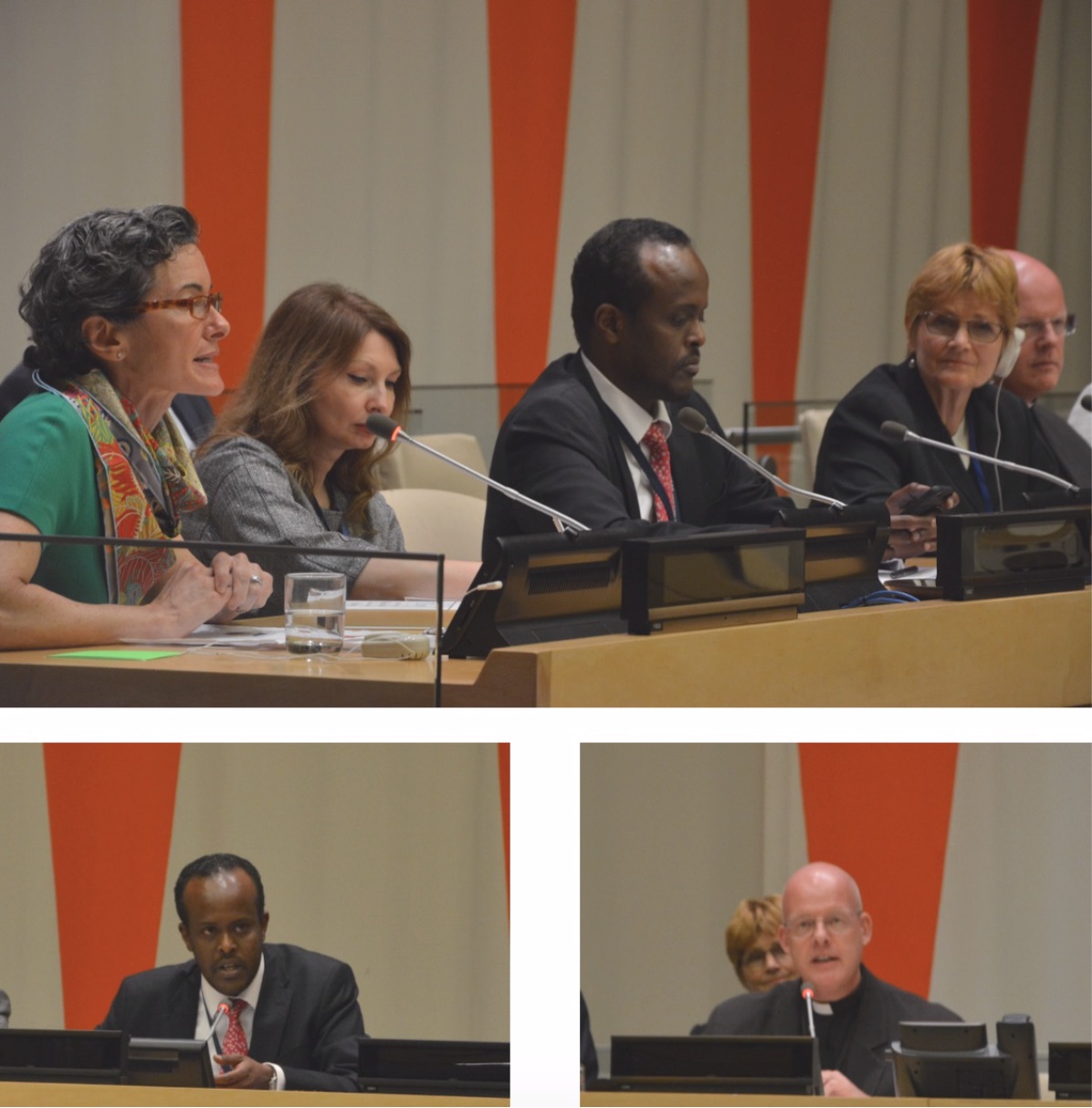 On June 10, together with the Permanent Missions of Djibouti and Belarus and the Universal Peace Federation, the Permanent Observer Mission of the Holy See to the UN co-sponsored a side event entitled "Good Parenting Builds Society: The Importance of Motherhood and Fatherhood" to honor the Global Day of Parents.

In his opening remarks, Ambassador Mohamed Siad Doualeh, Permanent Mission of the Republic of Djibouti to the UN, pointed out that the family is the natural unit of society and plays an important role in the eradication of poverty, in the building of intergenerational solidarity and in the reduction of inequalities. He mentioned that every society requires families composed of a mother, father, and children and that good parenting is fundamental to boost a child’s confidence and openness to others.

Ambassador Valentin Rybakov of the Permanent Mission of the Republic of Belarus to the UN noted that observing the Global Day of Parents, normally celebrated on June 1, is a crucial reminder of the importance of roles of mothers and fathers. Protecting and supporting motherhood is a priority for Belarus, a country that is part of the Group of Friends of the Family, he said. He closed his intervention by reiterating that the family is the most important element for thriving society and for creating a better future.

Speaking on behalf of the Permanent Observer Mission of the Holy See to the UN, Monsignor Tomasz Grysa stated that the family is not only essential for healthy children, but also for healthy societies.

“Growing up in a family with a mother and a father helps children achieve emotional maturity and learn how to recognize the beauty of the two sexes,” he said.

Some segments of our society, he said, “cannot adequately comprehend the real meaning of the gift of persons in marriage, responsible love at the service of fatherhood and motherhood, and the true grandeur of procreation and education.”

He also noted that parents have rights as the primary educators of their children and have the “grave duty to take responsibility for the well-rounded personal and social education of their children.” The loving relationship between parents and children is irreplaceable and “therefore incapable of being entirely delegated to others or usurped by others."

Children also have “the right to grow up in a family with a father and a mother capable of creating a suitable environment for the child's full and harmonious development and emotional maturity."

Providing sexual education, he added, is likewise primarily the role of the parents, as children are faced "with a culture that, all too often, reduces the human sexuality to the level of entertainment.” He urged parents to "aim firmly at a training in the area of sex that is truly and fully personal: for sexuality is an enrichment of the whole person - body, emotions, and soul - and it manifests its inmost meaning in leading the person to the gift of self in love."

There is an "urgent need,” he concluded, to promote a new alliance between parents, schools and society that can offer a positive education and that"respects the primary responsibility of parents in cooperation with the educational work of teachers." 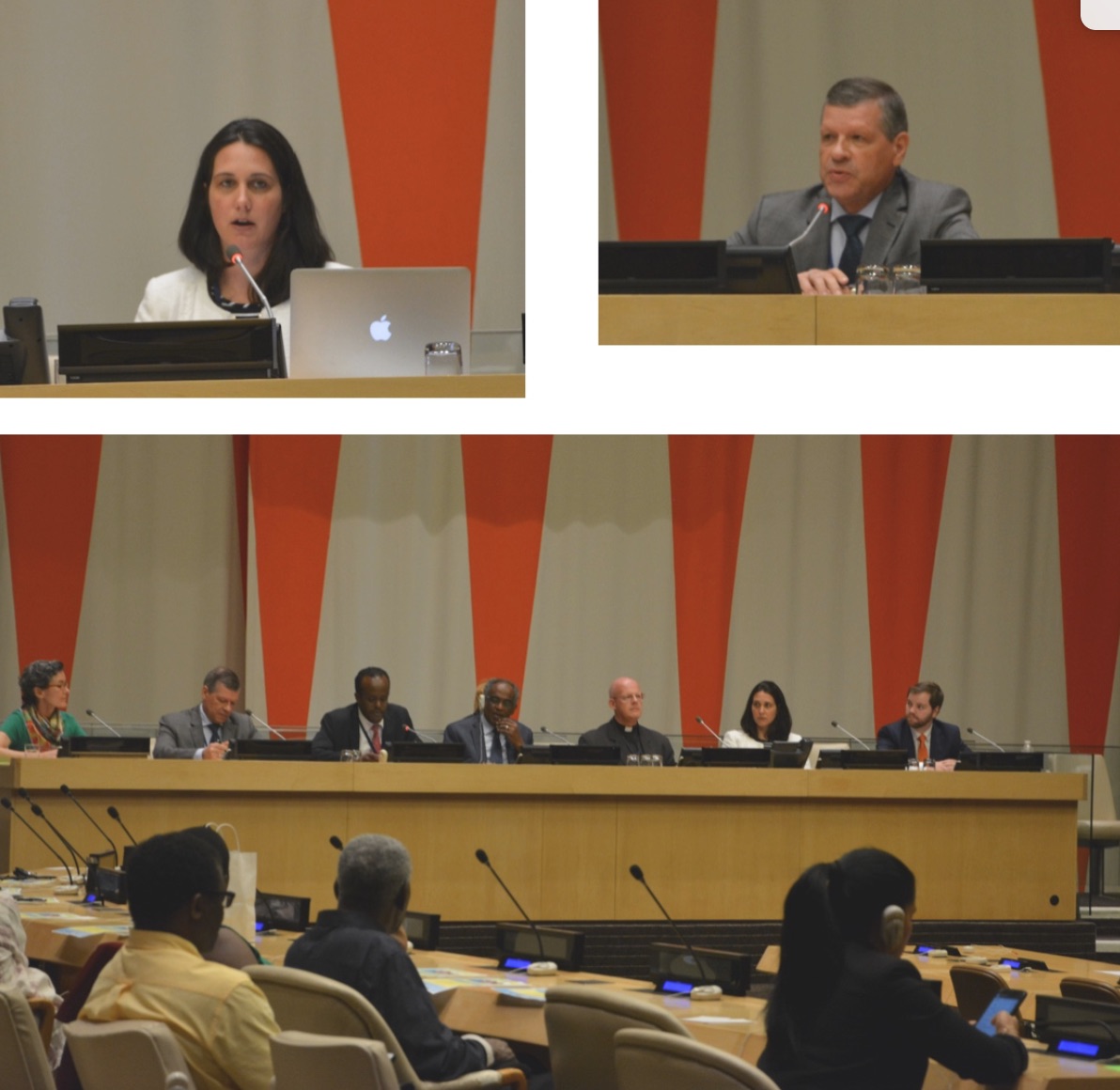 The panel of experts included Erica Komisar, a licensed social work, a parenting coach, psychoanalyst, and author of Being There: Why Prioritizing Motherhood in the First Three Years Matters. She spoke about the scientific and neurological evidence that highlights the damaging consequences for children who experience a difficult family life. Among American children today, there are more cases of mental disorders due to parents' absence during a child’s first three years of life than ever before.

Ms. Komisar’s research showed that the reassuring and nurturing presence of a mother is essential for "buffering young children from feelings of stress and to ensure their natural development. Children who have a mother present in their lives, particularly in the first three years, develop secure attachment relationships, whereas those that are separated from their mothers at an early age often experience stress and emotional difficulties particularly with attachment."

The role of fathers is equally crucial in the lives of their children in providing secure places for them to develop mentally and emotionally, she said.

Komisar presented evidence from US social studies that indicated 1 in 5 children living in the US today have been diagnosed with a mental or emotional disorder, that there is a 400 percent increase in children taking anti-depressants and a 119 percent increase in eating disorders for children under 12.

While it may not always be possible for women to be present to their children in early childhood, she encouraged the young women in the audience hoping to balance career and family, saying that life has seasons and that women should not feel under pressure to choose family or work. “Work will always be there, but children will not.

Grace Melton of the DeVos Center for Religion and Civil Society at the Heritage Foundation spoke about some of the benefits of marriage for both children and society. "Children deserve both a mother and a father. Men and women are equal in dignity and worth, but they are not the same," she said.

"Strong families are the best resource every society has for caring for and raising children into healthy and responsible adults". Marriage, Ms. Melton said, encourages men and women to “commit permanently and exclusively to each other and to take responsibility for their children," creating a more harmonious society.

Melton shared the findings of prominent social scientists in the U.S. and from national surveys and stated that all available data indicate that children who live in a stable family home with married mothers and fathers have better physical, emotional and mental health.

“It is easy to see the social and economic cost that communities shoulder as a result of family breakdown," Melton said: 77.9 percent of children suffering in long term poverty come from broken or never-married families, while children living in a family with a mother and a father are 82 percent less likely to live in poverty,

The data also demonstrate a correlation between family life and violence, with "women and children less likely to experience domestic violence in intact married families than in other family norms."

Melton expressed her hope that the UN and the European Court of Human Rights seek to protect children and families: "By safeguarding and harnessing the many social benefits that the family bestows, we will facilitate achievement of the UN's [sustainable development goals], and leave a better world for our children." 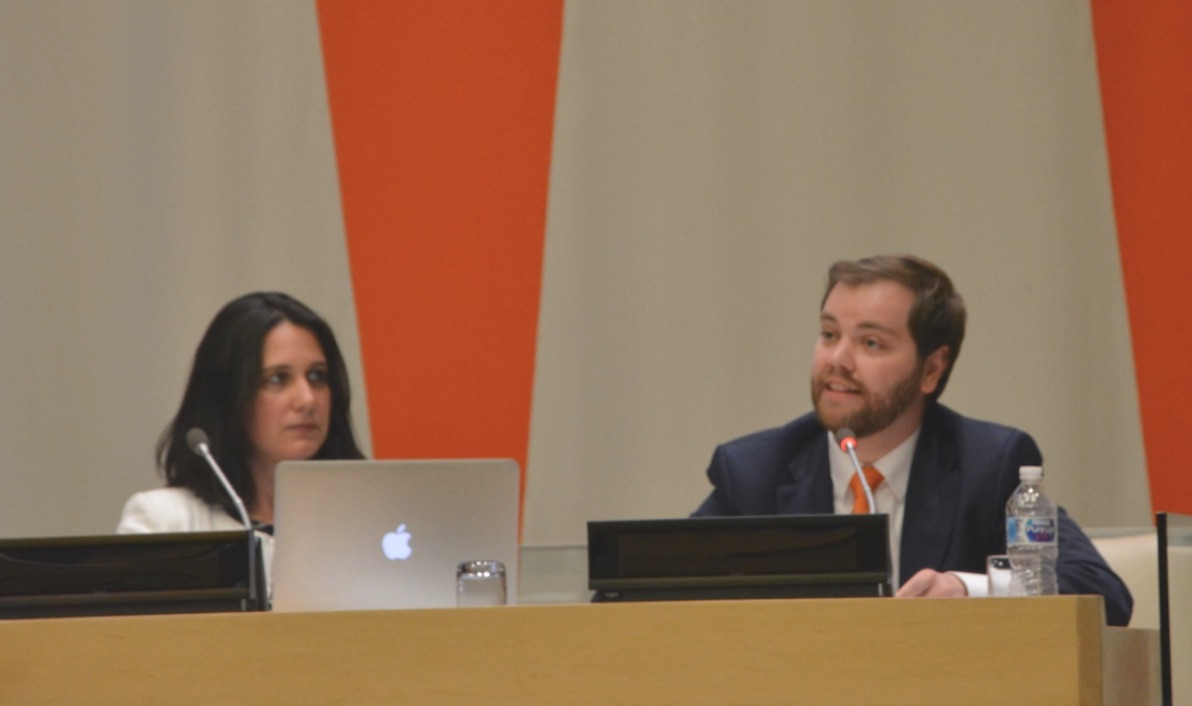 Jonathan Schweppe, Director of Policy and Government at the American Principles Project, described the family as “the most important natural institution in the history of the world,” but noted that the family has now arrived at a state of crisis thanks to the loss of fathers in the home. Children are paying the price for this social failure with one in four or 19.7 million American children living at home without a father, he said. These children face incredible obstacles and are more at risk for destructive behaviors.

With women often left to raise children on their own and parenthood clearly in crisis, the US should stop incentivizing family breakouts he said. Maternity and paternity leaves should be made an affordable option.

Following the presentation of the expert panel, the floor was opened for questions and comments. The delegate from Russia noted that the Universal Declaration of Human Rights recognizes the family as the natural unit of society and called upon UN agencies and States to harness the potential of the family for development and harmony in society. A delegate from Comoros said that it is crucial to help young people recognize the importance of family.

To watch the event in its entirety click here. 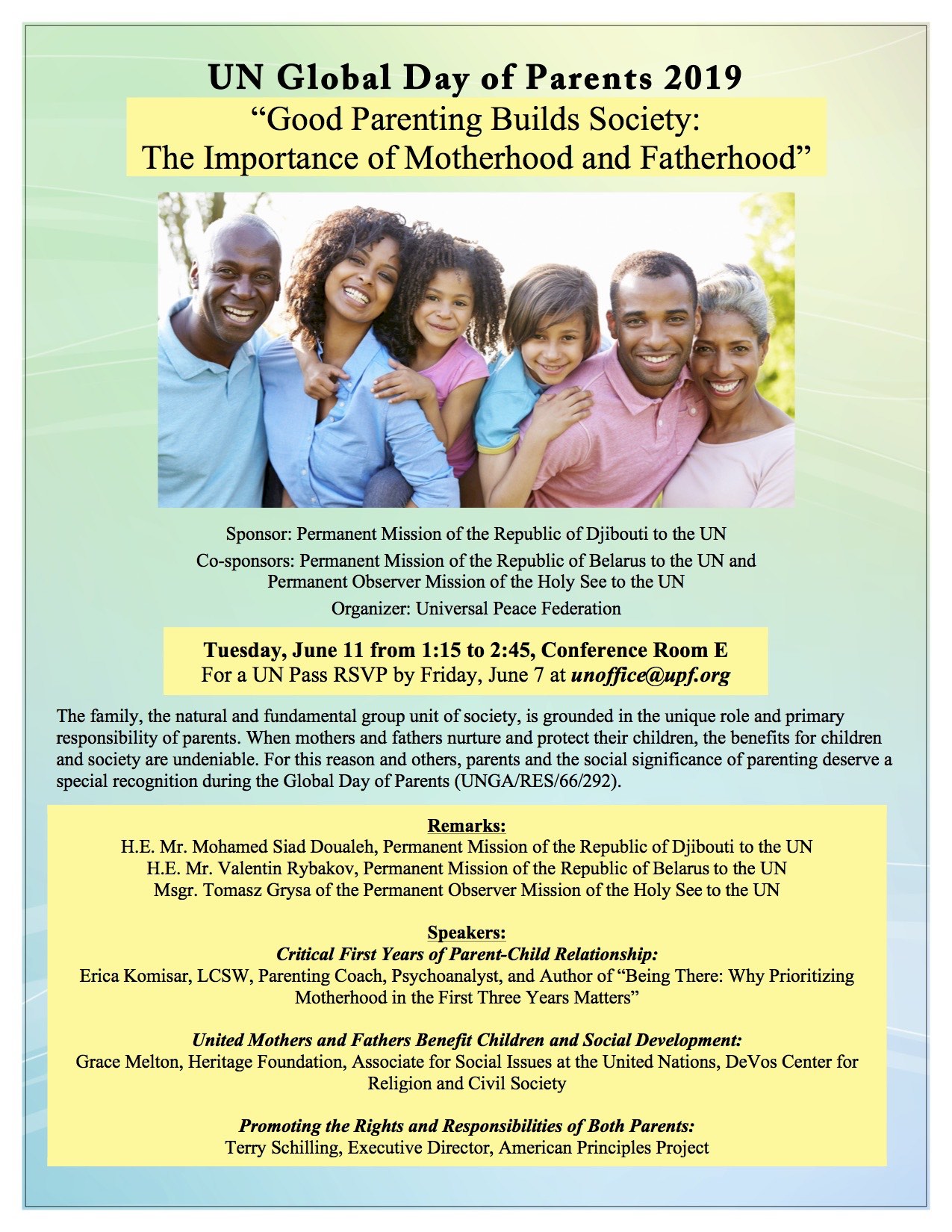