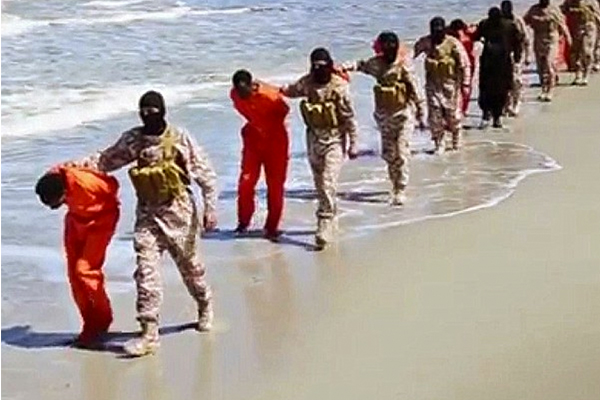 When Pope Francis spoke to the General Assembly of the United Nations last September, he renewed his “repeated appeals regarding to the painful situation of the entire Middle East, North Africa and other African countries, where Christians, together with other cultural or ethnic groups, and even members of the majority religion who have no desire to be caught up in hatred and folly, have been forced to witness the destruction of their places of worship, their cultural and religious heritage, their houses and property, and have faced the alternative either of fleeing or of paying for their adhesion to good and to peace by their own lives, or by enslavement.”

He said, “These realities should serve as a grave summons to an examination of conscience on the part of those charged with the conduct of international affairs” and added, “The most basic understanding of human dignity compels the international community, particularly through the norms and mechanisms of international law, to do all that it can to stop and to prevent further systematic violence against ethnic and religious minorities and to protect innocent peoples.”

The atrocities committed by ISIS, Boko Haram and other extremist groups against the innocent people continue.

On April 28, the Permanent Observer Mission of the Holy See to the UN, together with co-sponsors CitizensGo, MasLibres and In Defense of Christians, will be hosting a side-event dedicated to defending the right to religious freedom (Universal Declaration of Human Rights, Art. 18), to hearing first-hand testimonies of the atrocities being committed suffering, and to mobilizing the international community to “do all that it can,” to quote Pope Francis “to stop and to prevent further systematic violence.”

The Conference will take place from 10 am to 1 pm in the ECOSOC Chamber at the United Nations Headquarters. It will feature three panels: one on protecting victims of persecution and fostering religious freedom worldwide; another presenting victims and eye-witnesses of mass atrocities against Christians and other religious minorities by ISIS in Syria and Iraq and by the Boko Haram in Nigeria; and a third detailing the sexual abuse suffering by Christian and Yezidi women and girls in the Middle East.  Speakers will include:

Archbishop Bernardito Auza, Permanent Observer of the Holy See to the UN

H.E. Ufuk Gokcen, Permanent Observer of the Organization of Islamic Cooperation to the UN

Mr. Carl Anderson, Supreme Knight of the Knights of Columbus.

The Hon. Lars Adaktusson, Swedish Member of the European Parliament and Initiator of the EP Resolution
condeming the mass murder of religious minorities by ISIS.

All members of the UN and wider community are most welcome to come to hear the stories of those suffering directly from the violent extremism as well as from experts on the ongoing atrocities to help formulate what needs to be done and motivate the international community to get it done to “stop and prevent further systemic violence.”

A UN Pass is needed to attend. To request a special events pass or to register for the event,