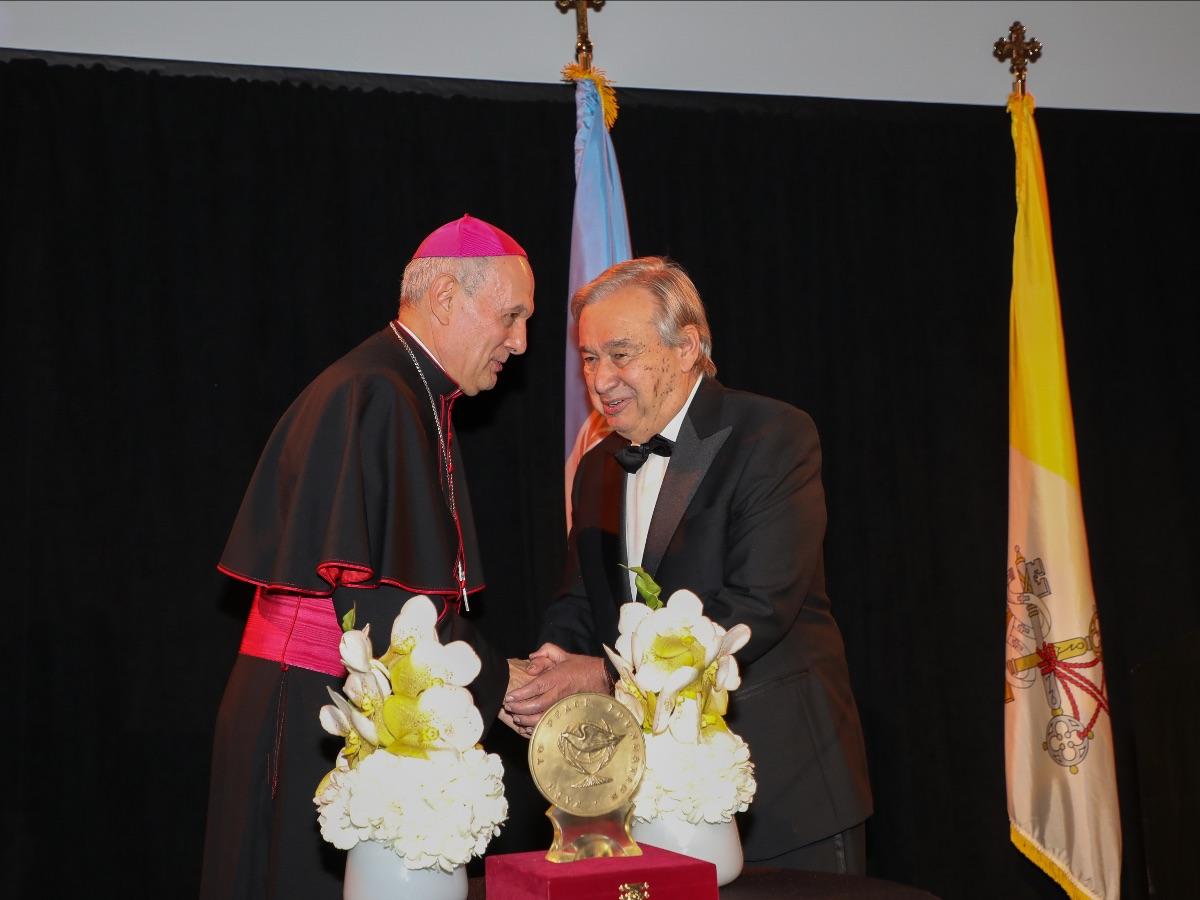 NEW YORK — On Tuesday, November 16, the Path to Peace Foundation celebrated its Gala, delayed three times by the COVID-19 pandemic, at Guastavino's in Manhattan and awarded its Path to Peace Award to the Secretary-General of the United Nations, His Excellency Mr. António Guterres.

Archbishop Gabriele Caccia, Permanent Observer of the Holy See Mission to the UN and President of the Path to Peace Foundation, welcomed 440 guests to the Gala.

The Path to Peace Award was bestowed on Secretary-General Guterres not just in recognition for the UN's work in peacemaking, peacekeeping and peacekeeping since its 1945 foundation — Mr. Guterres was originally scheduled to receive this Award in May 2020, during the celebration of the UN's 75th Anniversary — but also for his personal contributions to peacemaking both prior to and during his service as the ninth Secretary-Genera.

Mr. Guterres is the third UN Secretary-General to receive the Path to Peace Award, following Boutros Boutros-Ghali (1993) and Kofi Annan (2000).

Archbishop Caccia and Co-Chairs Vicki Downey and Angelo Vivolo all thanked those present for their attendance, which they characterized as a sign of hope of the emergence from the worst of the pandemic.

In his remarks, Archbishop Caccia thanked Mr. Guterres for his important work at the United Nations and noted that the Path to Peace Foundation sought to honor him 2015, prior to his tenure as Secretary-General, for his efforts during what was the worst refugee crisis since World War II as UN High Commissioner for Refugees, in helping to resolve the conflict in East Timor as Prime Minister of Portugal, and for his endeavors to bring peace to impoverished areas of Lisbon as a university student working with Catholic Action. As High Commissioner, however, Mr. Guterres was unable to receive the honor, so the Path to Peace Board resolved to wait until his tenure as High Commissioner was over to ask him again.

“Little did we know then that his lifetime work as a peacekeeper, peacemaker, and peacebuilder would only grow with his election [and re-election] as the ninth Secretary-General,” said Archbishop Caccia.

Archbishop Caccia said that Pope Francis and Mr. Guterres manifested the compatibility between the peace of the Gospel and that sought by the peoples of the world in their Joint Statement on Building a Peaceful, Just and Humane Society before Christmas in 2019. He also outlined how "their voices joined in unison in calling for a global ceasefire during the pandemic, so that the energies of the world could be dedicated to fighting against COVID than against brothers and sisters”.

Archbishop Caccia recalled Pope St. Paul VI's 1965 remarks to the UN General Assembly when he said that the UN's "great work" is "the education of mankind in the ways of peace. The United Nations is the great school where that education is imparted." Archbishop Caccia identified Mr. Guterres as the “inspiring Chancellor of that university, as well as a tireless student, teacher, architect and artisan of peace globally”.

Recalling the words of Jesus in the Sermon on the Mount, “Blessed are the peacemakers,” Archbishop Caccia continued, “we ask him, through your efforts, to bless always and everywhere ‘we, the peoples of the united nations’,” before inviting Mr. Guterres to receive the award.

United Nations Secretary-General António Guterres accepted the award as “a tribute to all of the women and men of the United Nations who forge the path to peace every day around the world.”

Pointing to the Parable of the Talents as a guiding force in his life, Mr. Guterres underscored our solemn responsibility to recognize our opportunities and privileges so we may use them in service of others. “Hope”, he emphasized, “is not for hoarding”.

Mr. Guterres emphasized that today’s tests are not principally policy tests, but moral tests. The COVID-19 pandemic and the climate emergency have demonstrated, he said, that “when one future is blighted, we are all at risk.” He mentioned the failure to vaccinate millions in the developing world, the disastrous effects of climate change, and conflicts ranging from Yemen to Myanmar to Ethiopia.

“When we exploit creation, we destroy the sign of God’s love for us,” Mr. Guterres said, quoting Pope Francis’ 2014 remarks.

“But the reverse is also true”, Mr. Guterres continued, praising Pope Francis’ efforts to “build bridges of trust”, including in His Holiness’ encyclical letters Laudato Si’ and Fratelli Tutti, that embody the notion that “only by walking the path of peace, in solidarity, can we build a better future”.

He called on humanity to unite its focus on fighting the destructive march of its common enemy – COVID-19. By ensuring vaccines for all, equal economic recovery, investments in human development from health to education, support for the most vulnerable, a balance in “the scales of power” for women and girls, and preservation of “our common home,” said Mr. Guterres, a more peaceful and sustainable future will be fulfilled for all.

Mr.Guterres concluded his remarks with a call to unity. The path to peace, he said, is “seldom straight," yet he said that history has shown time and again that “when we respect and support the essential human rights and dignity of every person," we can together accomplish great things.

In lieu of the customary monetary award given to the honoree, at the Secretary-General's request, the Path to Peace Foundation will split the award to two charities of Mr. Guterres’ choice: The Holy Family Hospital of Bethlehem Foundation and the Daughters of Charity Center of Nutrition in Cité Soleil, Haiti. Archbishop Caccia said that guests at the dinner and others would be able to augment those gifts by visiting the websites of the Holy See Mission and The Path to Peace Foundation (or more directly, by clicking on the links above).

The funds raised by the Path to Peace Gala allow the Path to Peace Foundation, among other things, to help the Holy See Mission to keep a vigorous presence at the UN and to bring the light of Catholic Social teaching to problems in the world. The Foundation also keeps at the forefront of considerations matters of conscience, peace, justice, the dignity of every person, interreligious harmony, the good of the family, the poor and the environment.

To view the videos from the event, please visit the YouTube page of the Holy See Mission or click on the links below: