Our website is being upgraded and may show errors while we work. Please check back in a few hours.
Week of April 22, 2016
By H. E. Archbishop Bernardito AuzaApostolic Nuncio and Permanent Observer of the Holy See to the United Nations

On April 22, Cardinal Peter K.A. Turkson, President of the Pontifical Council for Justice and Peace, led the Holy See delegation to witness 175 countries sign the Paris Agreement on Climate Action at the UN, a treaty that calls signatories to go beyond their existing commitments to reduce greenhouse gas emissions and improve humanity's toll on the environment.

In his September 25 address to the General Assembly, Pope Francis called the United Nations to take measures to protect and care for God's creation and said, "A selfish and boundless thirst for power and material prosperity leads both to the misuse of available natural resources and to the exclusion of the weak and disadvantaged. Any harm done to the environment is harm done to humanity."

The Holy Father echoed this sentiment through social media on April 22 when the Pontiff tweeted,  "Climate change represents one of the principal challenges facing humanity today, and the response requires the solidarity of all." 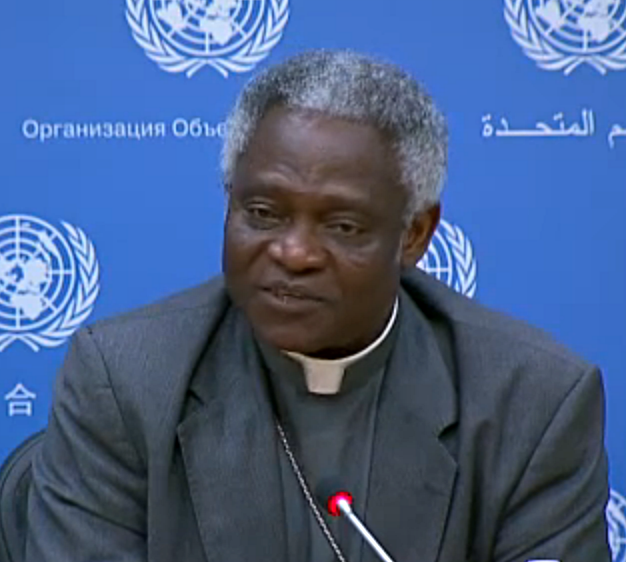 On April 21, Cardinal Peter K.A. Turkson, President of the Pontifical Council for Justice and Peace, gave the intervention of the Holy See during the High Level Thematic Debate on Achieving the Sustainable Development Goals.

In his statement, Cardinal Turkson communicated the greetings and prayerful wishes of Pope Francis and reiterated Pope Francis’ assessment, given during his Sept. 25, 2015 Address to the UN General Assembly, that the 2030 Agenda for Sustainable Development an “important sign of hope” that requires an effective, practical and constant will to ensure its implementation. This implementation must involve, he added, not just public financing, but the care and commitment of non-state actors, including faith-based groups. Citing Pope Paul VI’s celebrated phrase, “Development is the new name of peace,” Cardinal Turkson emphasized that peace is the necessary condition for any true and lasting development. For that reason, war and conflict are likely the greatest challenge to the realization of the 2030 Agenda.

On April 21, Archbishop Bernardito Auza, Permanent Observer of the Holy See to the UN, gave an intervention during United Nations Special Session of the General Assembly on the World Drug Problem.

In his statement, Archbishop Auza firmly rejected the use and legalization of illegal drugs and reiterated Pope Francis’ words emphasizing that to address the underlying causes of drug addiction, rather than liberalizing drug use, it is necessary to stop the spread of drug addiction. “The fight against drugs will not be won with drugs,” Pope Francis said, but with education, greater job opportunities, life, love and care for others. The family is particularly important for the prevention of drug addiction and the treatment, rehabilitation, and reintegration of users, Archbishop Auza affirmed. He also said that drug traffickers, local pushers and drug users ought to be treated differently according to the principle of just proportionality. To protect people from the scourge of drug use and its collateral harms, he added, international cooperation toward and integrated and balanced anti-drug strategy are required.