Our website is being upgraded and may show errors while we work. Please check back in a few hours.
Week of September 19, 2016 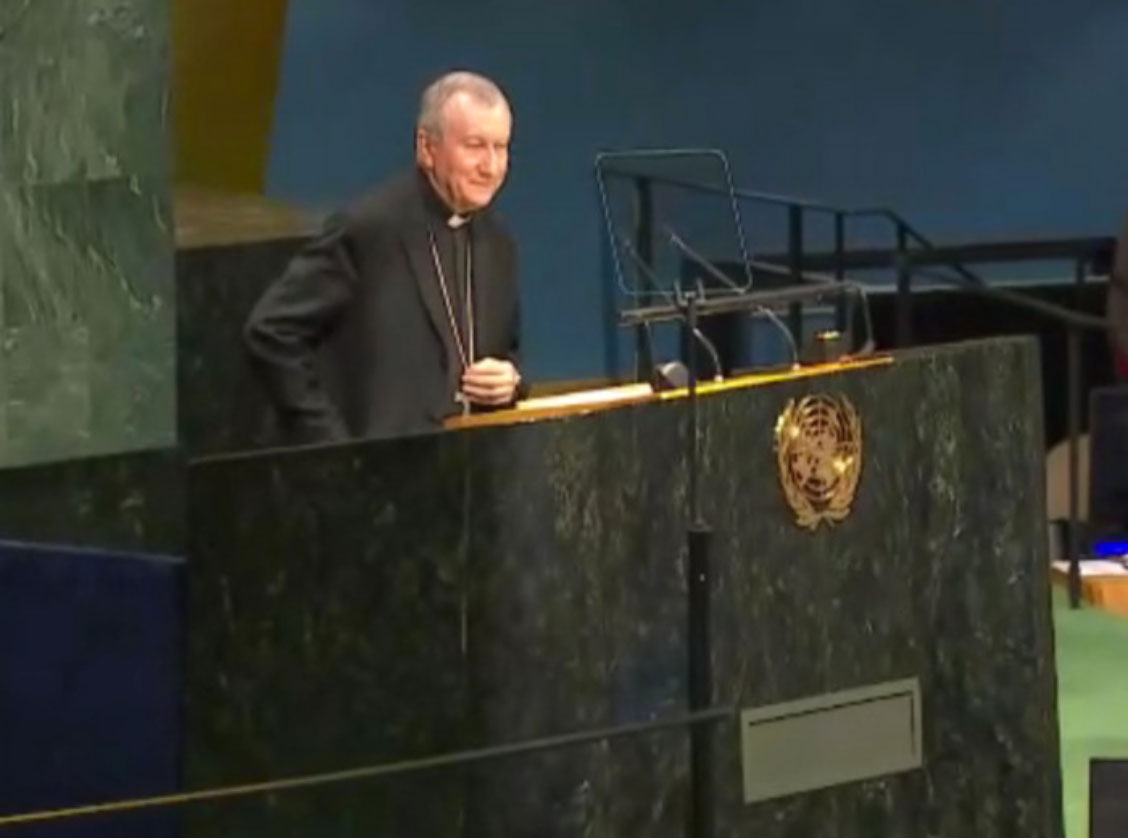 On September 22, His Eminence Cardinal Pietro Parolin, Secretary of State of His Holiness Pope Francis, delivered the following address to the General Debate of the Seventy-First Session of the United Nations General Assembly.

In his address he called governments and all people to commit to the common good to achieve the 2030 Agenda for Sustainable Development, noting men and women must be the principal agents for integral human development. Invoking last year's address of Pope Francis to the General Assembly, he said development should be achieved with respect for life at all stages, the poorest of the poor, migrants and refugees, and care for the environment.

He also called world leaders to work with urgency to achieve peace in areas of conflict, namely Syria, Iraq, Libya, Israel, Palestine, South Sudan, the Great Lakes, and Ukraine, which have caused a mass exodus of more than 65 million people from their homes, and called for the world to adopt Pope Francis' message of mercy towards the most vulnerable.

Repeating Pope Francis' words, he said, "'Mercy is the fundamental law that dwells in the heart of every person who looks sincerely into the eyes of his brothers and sisters on the path of life," and called for an international consensus aimed at abolishing the death penalty.

Plenary Session for United Nations Summit for Refugees and Migrants

On September 19, His Eminence Cardinal Pietro Parolin, Secretary of State of His Holiness Pope Francis, delivered the following intervention at the Plenary Session for the United Nations Summit for Refugees and Migrants at UN Headquarters in New York.

On September 21, His Eminence Cardinal Pietro Parolin, Secretary of State of His Holiness Pope Francis, delivered the following intervention at the High-Level Meeting on Antimicrobial Resistance in the Trusteeship Chamber of UN Headquarters in New York. 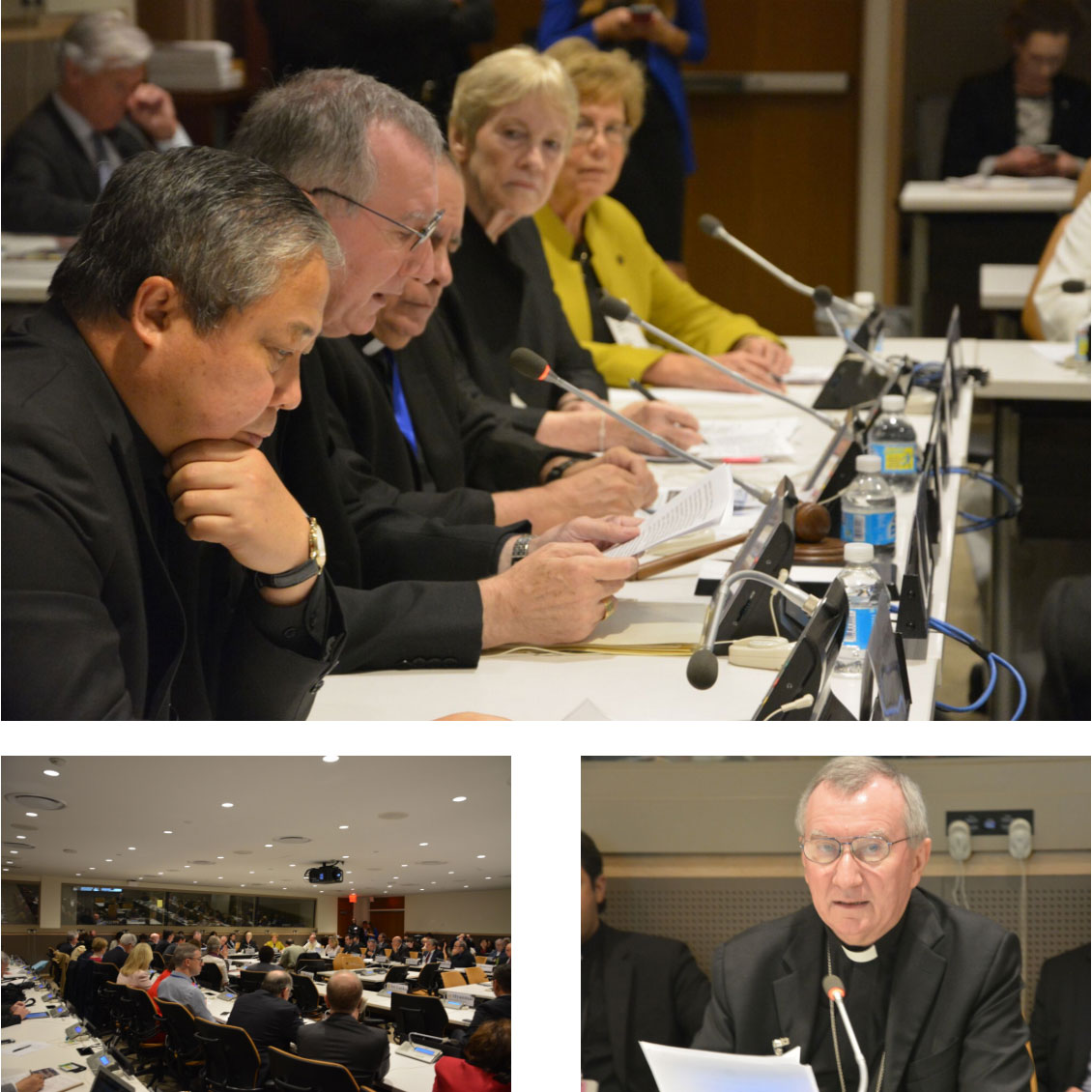 On September 19, during the UN Summit for Refugees and Migrants, The Permanent Observer Mission of the Holy See to the United Nations, together with the International Catholic Migration Commission and Caritas Internationalis, sponsored a High-Level Side Event entitled “Responsibility and Solution Sharing: The Role of Religious Organizations in Responding to Large Movements of Refugees and Migrants.”

Cardinal Pietro Parolin, Secretary of State to His Holiness Pope Francis, delivered the keynote address, in which he illustrated the numerous struggles refugees and migrants face, a journey he said is often involuntary, caused by conflict, persecution, poverty, and environmental degradation.

“It is even worse when we consider that, during their journey, migrants and refugees face the dangers of trafficking, starvation and many forms of abuse,” he said. “And upon arriving at their destination, rather than finding a safe haven, they find mistrust, suspicion, discrimination, extreme nationalism, racism and a lack of clear policies regulating their acceptance.” 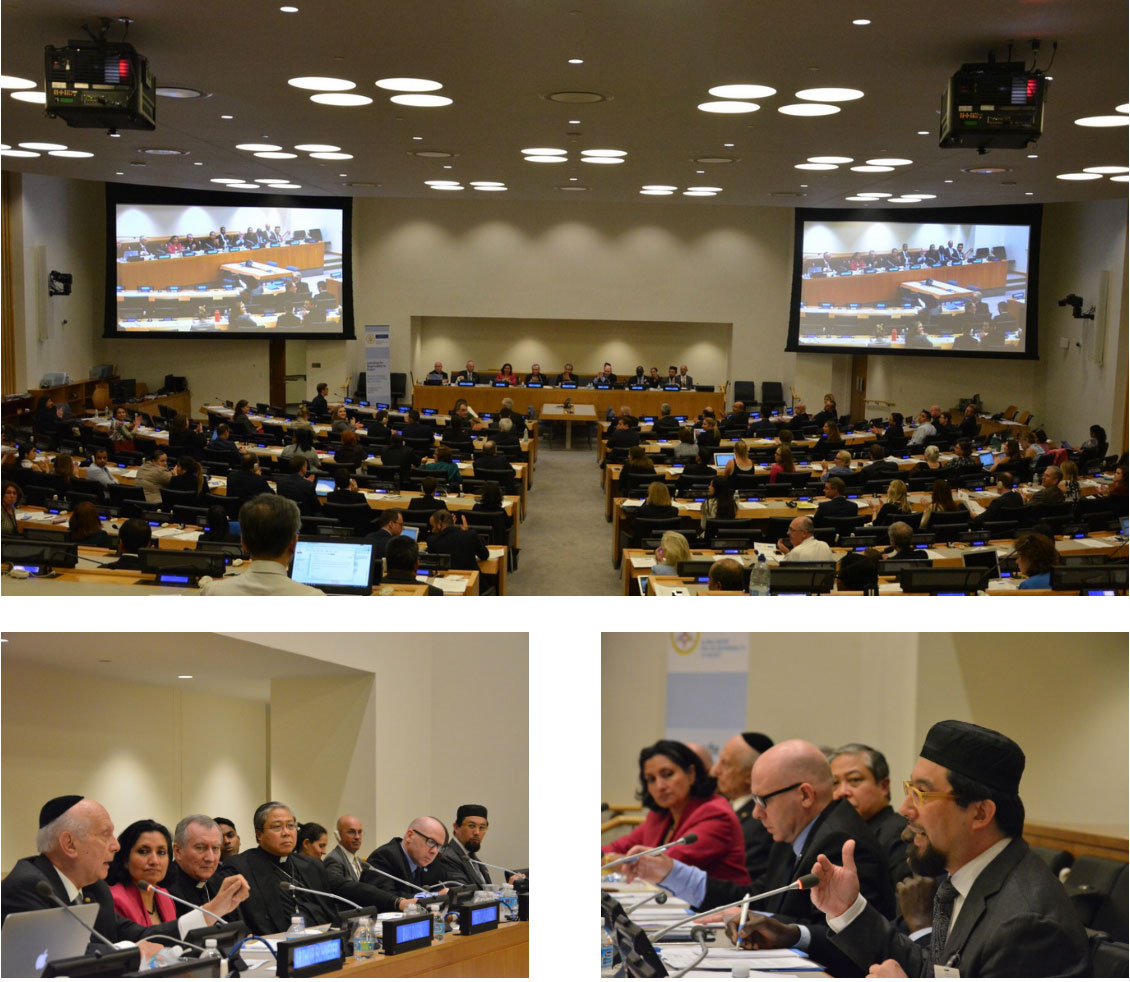 Dr. Simon Adams, Executive Director of the Global Centre for the Responsibility to Protect, whose family immigrated to New Zealand due to the violence in Northern Ireland during his childhood, explained the Responsibility to Protect is a promise that heads of State and Government made through a 2005 resolution to defend all populations from genocide, war crimes, ethnic cleansing, and crimes against humanity.

“Despite a near universal acceptance of the Responsibility to Protect, in many conflict situations, religious intolerance is still used to divide the human family and to foment violence,” Adams said, noting the atrocities and genocide ISIS is committing against Yazidis, Christians and other religious and ethnic minorities.

Cardinal Pietro Parolin, the Secretary of State to His Holiness Pope Francis, said in his keynote address that the major world religions are peaceful and are not the cause of atrocity crimes.

“There is a risk of falling into the temptation of misunderstanding or hiding the real cause of these despicable actions by attributing the cause to religion,” he said. “Religions are not the cause of these ills, which result instead from some political, geopolitical and economic interests, and from the desire for power and domination.” 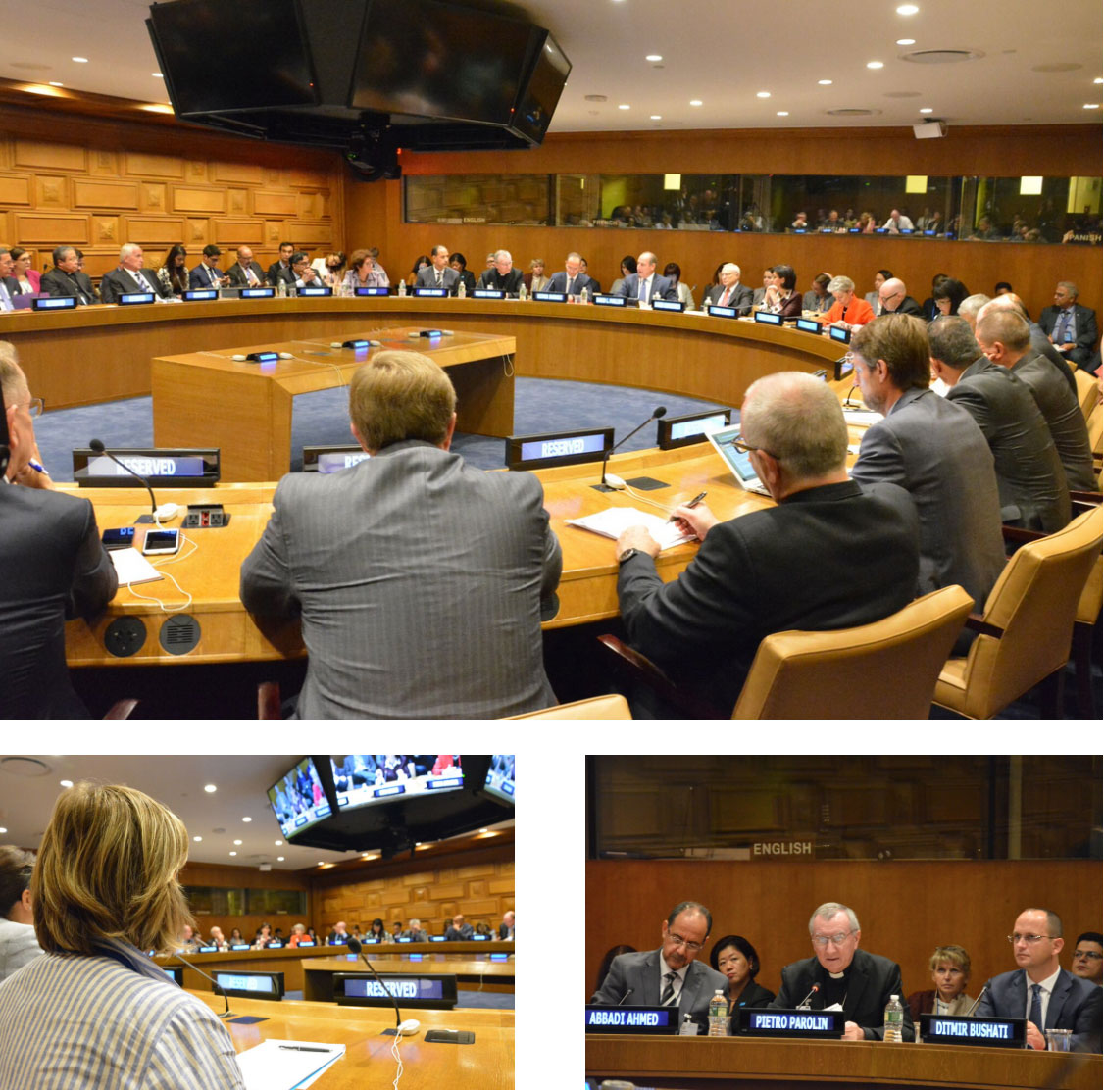 On September 20, the Holy See co-sponsored a high-level panel discussion entitled “Countering and Preventing Violent Extremism through Education,” together with the Permanent Missions of Albania, the U.S., Jordan, Morocco to the United Nations and UNESCO. The event took place at UN Headquarters in New York City.

Ditmir Bushati, Foreign Minister of Albania, said the disturbing surge of foreign fighters from more than 100 countries who have left their homes to join violent extremist groups shows that governments must increase their efforts to combat extremism through education.

“Education is perhaps the most comprehensive and long-term action where our governments need to invest to build a stronger and resistant future generation in facing such threats,” he said.

Cardinal Pietro Parolin, Secretary of State to His Holiness Pope Francis, said the complex psychological, socio-economic, political and ideological elements that lead individuals, especially young people, to join extremist groups must be addressed, and faith based groups have a key role to play.

“Faith-based communities’ educational efforts not only form men and women in religious practice, but can also form them to be responsible citizens,” he said.  “This is especially important if we are to counter destructive narratives that engender radicalization and extremism.”

Cardinal Parolin also said faith communities and all levels of government should work together to promote wellbeing of families.