Our website is being upgraded and may show errors while we work. Please check back in a few hours.
Week of November 7, 2016

On Wednesday, Holy See Secretary of State, Cardinal Pietro Parolin, said he hoped the newly elected American president, Donald Trump, would be guided by God to serve his country but also to promote peace and wellbeing in the world.

In a conversation with journalists on the sidelines of a conference at Rome’s Lateran University, the cardinal said he respected the will of the American people as expressed in this exercise of democracy. “We send our congratulations to the new president”, he continued, in the hope that “his government may bear real fruit”.

He said Trump can be “assured of our prayers that the Lord may enlighten and support him” in the service of his country, but also in the service of peace and wellbeing in the world. Cardinal Parolin concluded by saying he believes there is a need for everyone to work to change the situation in the world today, which is one of “grave wounds, of serious conflicts”.

Click here to read the report by Vatican Radio in its entirety.

In this edition of the Newsletter, we begin an occasional series for weeks when there are not many statements, interventions, upcoming events and other such news to present. The series will involve brief profiles and interviews with members of the staff of the Permanent Observer Mission of the Holy See to the UN, who can provide a perspective of the work of the Mission “from the inside.” Today we begin the series with a profile of the newest staff member at the Mission, Italian-born Maddalena Giungi. 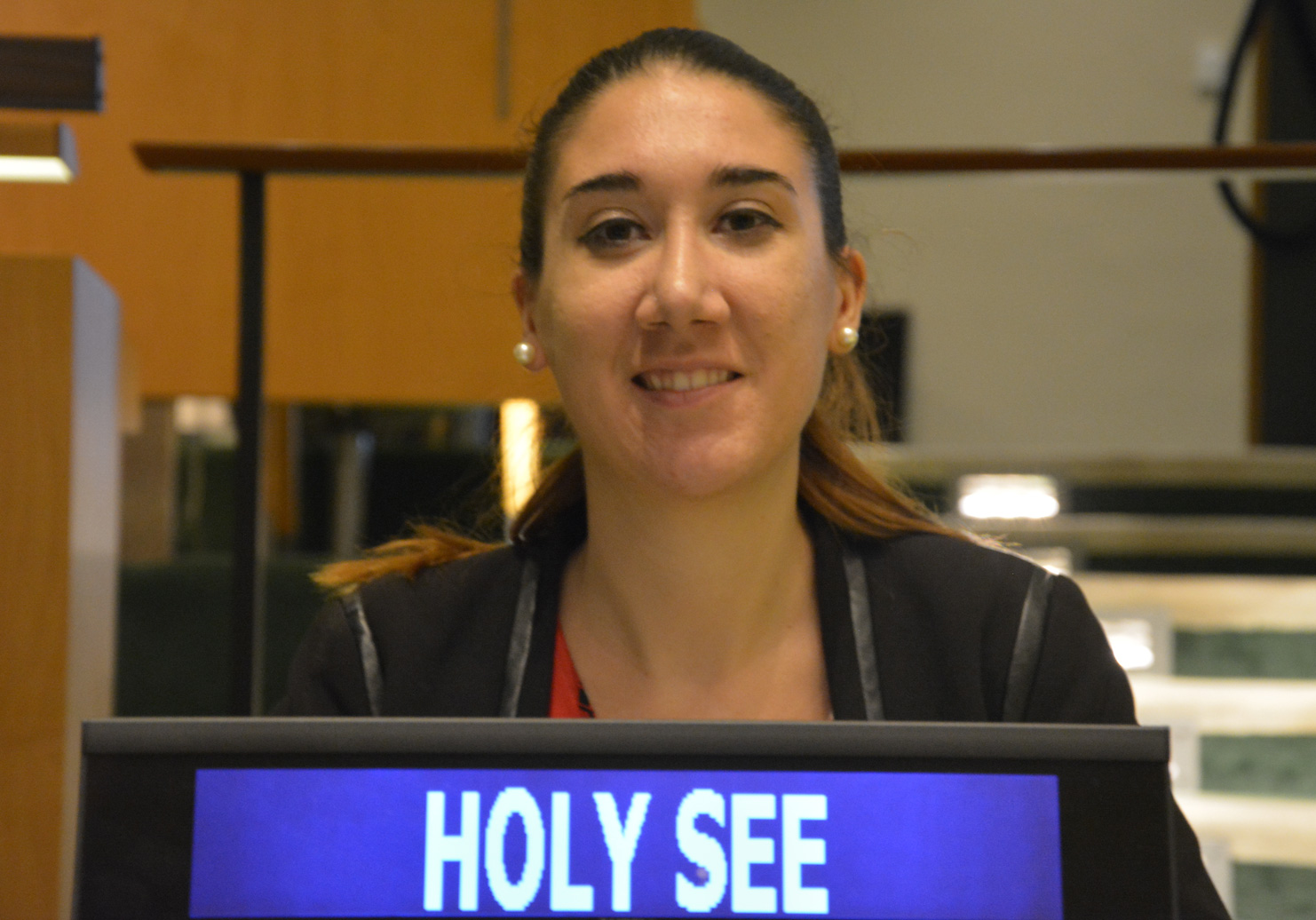 Q: What is your role at the mission?
I am working as negotiator covering mainly the Second and the Third Committees of the UN General Assembly, which are the Economic and Financial Committee and the Social, Humanitarian and Cultural Committee, respectively.

Q: What does a typical day look like for you?
I start my morning attending daily Mass and saying Morning Prayer with the staff of the Mission. We then have a morning meeting during which we receive and discuss our schedule and commitments for the day. It is also an opportunity to share our experiences and concretely help each other face the tasks we are assigned. The day continues at the UN, where I participate in negotiations, which in this particular time of the year requires us to be there for most of the day. Our work as negotiators is a concerted effort, and I am extremely grateful to my team for supporting me and teaching me how to do it more effectively.  If I am lucky, my day concludes at the Mission where I can report on my day of negotiations and share my experiences with my colleagues.

Q: What is your family background?
I was born in Fano, a little city in the middle of Italy, located in Marche region on the Adriatic coast. I grew up in Pesaro with my mom, dad and  older brother until I went to University. My parents and grandparents introduced me to my faith through their daily discreet and loving testimony and have transmitted to me their positive curiosity for all God's gifts.

Q: How has your work corresponded to the expectations you had before you started?
This work has exceeded my expectations. This is a big gift. It is undeniable that this work gives us the unique opportunity to be at the UN, to know its mechanisms and touch international politics, but what really strikes me is the importance of the Holy See in this international context. The priority of the human person and his or her integral fulfillment is the leading principle of our action. This gives us a great responsibility and also a deep freedom to reach every person and to serve as proponents of an authentic dialogue. I feel privileged because we are not just called to be diplomats but real witnesses of what we believe in.

Q: What is your educational background?
When I was living with my family in Pesaro, I attended Liceo Classico for five years, where I studied Latin and Greek, among other disciplines. After high school, I earned my Bachelor's and Master's degrees in moral philosophy at the Catholic University of the Sacred Heart in Milan. During my Master's program I studied as a visiting scholar at Notre Dame University, where I wrote my thesis on Natural Law and Natural Rights Theory. After I graduated, I started a PhD program in Public Law at the University of Milan, working on a doctoral dissertation focused on fundamental rights protection within the European Union's constitutional system, with special reference to the EU's Fundamental Rights Agency. I completed the dissertation at the Law Faculty of Oxford as a visiting doctoral student. Then I was selected as a 2015-16 Thomas W. Smith Postdoctoral Research Associate of the James Madison Program at Princeton University, where I worked on a project concerning the crisis of the constitutional values of the European Union and the legal concept of human dignity. When I was at Princeton I was also a fellow of the program on religion, diplomacy and international relations (PORDIR) of the Liechtenstein Institute for Self-determination (Woodrow Wilson School of International Relations), where I worked on a project comparing recent governmental institutions that protect and monitor international religious freedom.

Q: What has been the most memorable experience in your new role?
Certainly my first negotiations have been one of the many highlights of these first several months. As a friend defined them, they were my baptism by fire. Not being able to leave the UN for 35 consecutive hours can’t be easily forgotten! It wasn’t an easy negotiation but I enjoyed the fellowship that can happen among people, even those on opposing sides, when they so mutually exhausted. Now I meet many of those delegates during Second Committee negotiations and it’s like meeting old friends with whom you can share memories.

Q: How was your transition to New York City?
Initially, New York City was a kind of a shock to me. For the past two years, I’ve been living in little cities or towns surrounded by trees and parks. In other words, I’ve gotten used to the meditative life of an academic. New York is everything but meditative! It’s disorienting and fascinating, chaotic and dynamic. I realized that the secret here, as everywhere, is to find good friends who guide you through the confusion of the big city and teach you how to deal with it and enjoy the best parts of it.  Now, I am starting to love New York but still have to discover a lot about this city.

Q: How do you spend your free time?
When I am not at the mission I like running along the waterfront path, and I enjoy going on walks with friends. I also like discovering new people and activies around the city.