Our website is being upgraded and may show errors while we work. Please check back in a few hours.
Week of December 12, 2016

On December 15, the Permanent Observer Mission of the Holy See to the UN gave an intervention during the Security Council Open Debate dedicated to “Preventing Catastrophe: A global agenda for stopping the proliferation of weapons of mass destruction (WMDs) by non-State Actors.”

In its statement, the Holy See said that the increasing involvement of non-State actors in wars and conflicts, particularly through the use of weapons of mass destruction, has had horrendous effects in terms of deaths, injuries and a crisis of refugees in flight from devastation. The Holy See reiterated its firm opposition to the production and use of WMDs, which are against all international humanitarian law. Strengthening relevant laws and conventions to prevent the sale or gifting of arms to unstable countries and regions is needed. There is also a need for a new global ethic addressing the wider security, political, economic and cultural dynamics that lead State and non-State actors toward the production of weapons rather than toward development and respect for human rights. Without a commitment to non-proliferation, arms control and disarmament and to controlling and limiting the production and movement of WMDs, the achievement of the 2030 Agenda for Sustainable Development will be seriously undermined.

In this edition of the newsletter, we continue the series of brief profiles and interviews with members of the staff of the Permanent Observer Mission of the Holy See to the UN, who can provide a perspective of the work of the Mission “from the inside.” Today we will highlight Sister Birgit Dechant, FSO and Sister Rian van Berkum, FSO, of the Spiritual Family of the Work, who will complete their time serving at the Holy See Mission at the end of the year. The Holy See Mission is grateful for the twelve years the Spiritual Family of the Work have contributed to the Mission, including the two and a half years Sister Birgit and Sister Rian have served.  We would like to invite you to join us in prayer as they undertake their new roles to serve the Church. 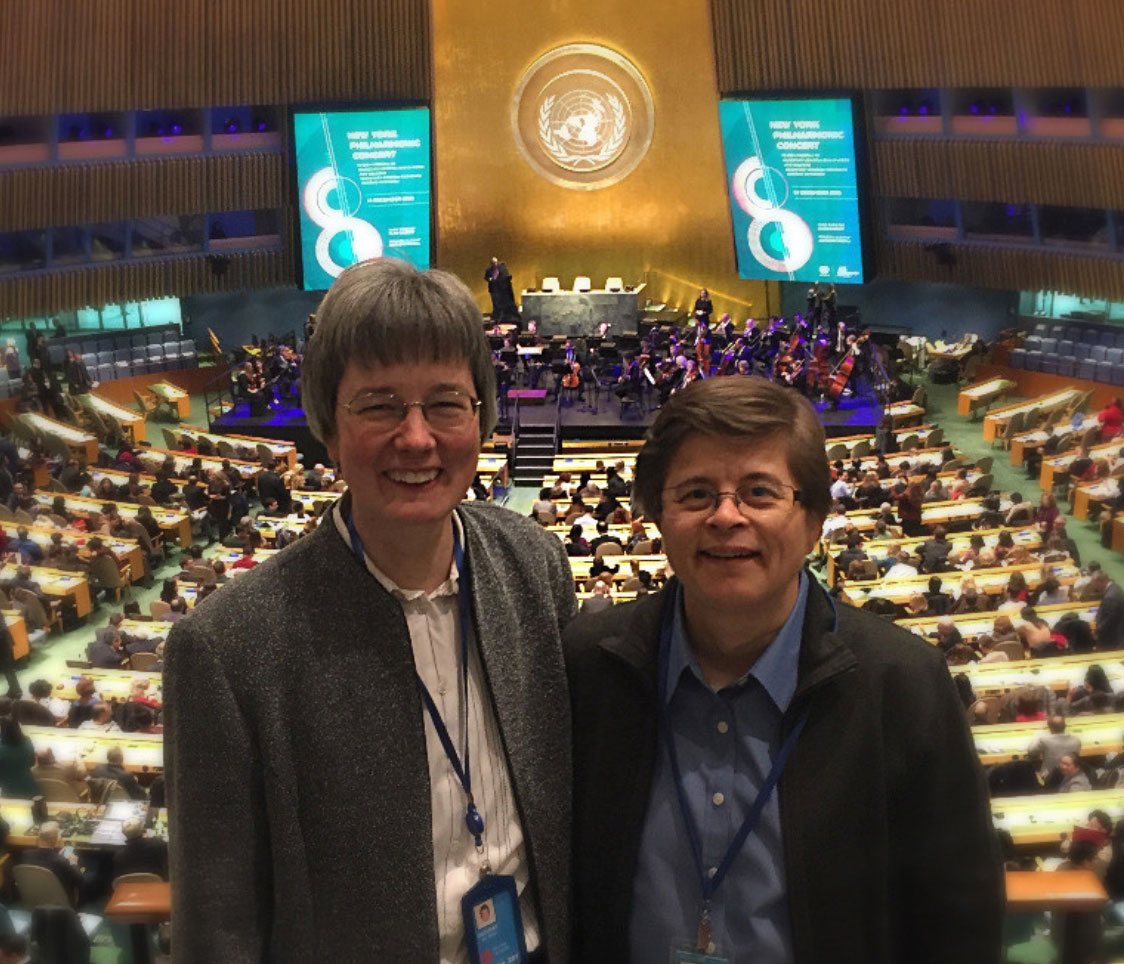 Q: What has been your role at the Mission?
I have been secretary at the office which means that I take care of the daily life of the mission by answering phones and emails, scheduling the calendar for Archbishop Bernardito Auza and doing many others things. It is a varied job in which I want to be a spiritual mother, to be there for the others and take care of them in the practical ways that are entrusted to me. Sr. Rian and myself normally don't go to the UN but we support those who go to the meetings by our prayer and work in the office of the Mission. We aim to do our work for Christ and for the Church with love and joy.

Q: What is your family background?
I was born in Vienna, Austria, and grew up in a village in the south of Vienna. I am the second of five children and come from a Catholic family. After having completed my Masters degree in theology in Vienna, I entered the Spiritual Family The Work (FSO).

Q: What drew you to the Spiritual Family The Work?
It was especially the freshness of the spirit of the Sisters I met. They spoke about God, the Church and faith in a way I had not heard before. I was impressed with their presence in the world. When I visited them and prayed with them in their chapel in Vienna in the ordinary apartment in which they lived, I was impressed how they were there for the Church and the world through their surrender to Christ. Then when I later visited the Mother House in Bregenz, Austria, I felt that this community should be my future home.

Q: What have been some of the highlights of your time serving at the Mission?
For me, major highlights were seeing the fruit of the work to which we contribute. Sometimes, for example, it takes a lot of administrative work to prepare a meeting or an event. It is gratifying when it goes well. Because the work requires effort, it gives a lot of joy. In my community, we are called to serve the Church in whatever needs She has. We are called "The Work" not because of the things we do, but because of the work of faith, to believe profoundly in Christ, the Son of God. Working for the Holy See Mission has been unique and a great privilege for our community because it has allowed us to very concretely serve the Church by serving the Holy Father's representative to the UN.

Q: What will you miss most about serving in New York City?
I will miss this joyful and open mentality which I encountered in many ways. I never felt insecure in the city. Most of the people are friendly and helpful.

Q: How will you be serving next?
My superiors have asked me to move to Rome. My first task, as everywhere, is to serve my Spiritual Family and be with my sisters. Concretely, in the house where I am going to live, we serve the Missionaries of Africa by taking care of their residence; and there is a specialized library on Blessed John Henry Newman which our community has built up since 1975. It is a meeting space which people who love Newman visit. Living in Rome, we meet many pilgrims from all over the world.

Q: What has been your role at the Mission?
I have been working in the archives, organizing documents and other papers, which includes correspondence to and from Rome, the UN, other organizations, both Catholic and interfaith, etc. The opportunity to work here was given to me by God who entrusted it to me through my superiors and therefore it has meant very much to me.

Q: What is your family background?
I was born in the southern part of the Netherlands. I am the oldest of three children and have two brothers. My mother stayed home with us and my father worked as a civil engineer. For two years, I trained in order to work with the elderly before entering the Spiritual Family The Work.

Q: What drew you to the Spiritual Family The Work?
The witness of the Sisters whom I met. When I visited them as a teenager in our house in the Netherlands, I discovered that I felt at home. This feeling of being at home made me ask myself if the Lord was calling me to this family. Before, I never thought that I would become a Sister. Through meeting the Sisters, the Lord revealed his plan and will  to me.

Q: What have been some of the highlights of your time serving at the Mission?
One highlight was certainly the Pope's visit to the UN and New York in September 2015, and that I was able to meet him in person. Another highlight was everything I encountered in my day-to-day work. I learned much about the task of the Church at the United Nations, and that She is witnessing to the truth, defending human dignity and speaking out for people who have no voice. It has been beautiful to discover that the Church is a mother in her diplomatic service. One of the main pillars of the charism of The Work is to love and serve the Church. At the Holy See Mission I may live it in a very direct way, by working for the representative of the Pope.

Q: What will you miss most about serving in New York City?
I will miss the nice, open, friendly and sincere American mentality. I have met people in various parishes and many friends of our community who live out their Catholic faith in a very beautiful way. They are Catholic in their whole being and in their witness to other people. That has been something that was a great experience for me, and I will really miss it. And it was the experience of being part of a Family, the Church. This might be surprising because you may not think it would be like this in a big city like New York.

Q: How will you be serving next?
I will go to Belgium to a village called Villers-Notre-Dame to be in a house in which our community has lived since 1950. It is an important place for us because our Foundress, Mother Julia Verhaeghe, lived there. Our spiritual family is in charge of two churches, one of them being a pilgrimage church to Our Lady Seat of Wisdom. Our house is a retreat house. I will serve the individuals and groups who come for retreats and other occasions.

See their website for more information about the Spiritual Family of the Work: