Our website is being upgraded and may show errors while we work. Please check back in a few hours.
Week of February 20, 2017

This week the Holy See Mission delivered one statement at the UN.

On February 21, the Permanent Observer Mission of the Holy See to the UN gave an intervention during the Security Council Open Debate dedicated to the theme of the “Maintenance of international peace and security: Conflicts in Europe.”

In its statement, the Holy See expressed its solidarity with all peoples affected by conflicts and aggression, reiterated the need to prioritize the preservation of human life, and called States to refrain from actions that debstabilize neighboring countries. With regard to the conflict in the Ukraine, the Holy See expressed its grave concern and said all necessary steps should be taken to enforce the cease-fire, implement agreed upon measures, respect international law with regard to Ukraine’s territory and borders, and find a political solution through dialogue and negotiation. It committed itself to offer direct humanitarian assistance to the affected population. 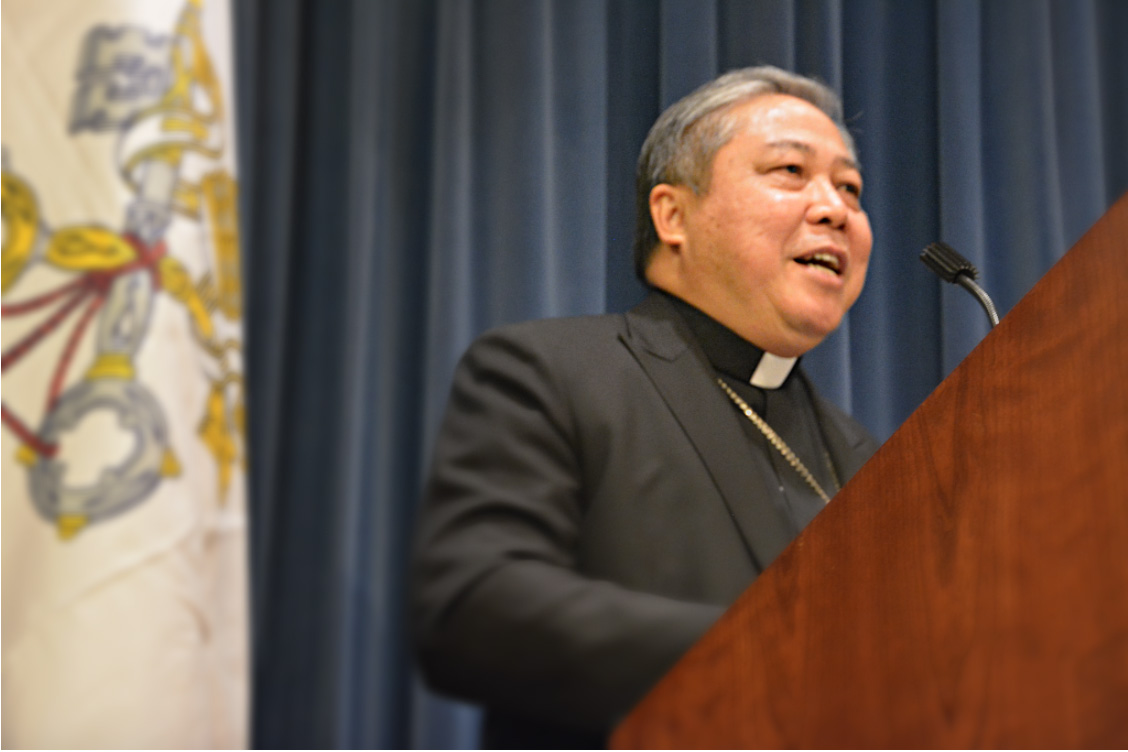 On February 23, Archbishop Bernardito Auza delivered a lecture entitled The Holy See and the Fight Against Human Trafficking, upon his inauguration as the Casamarca Foundation Chair in Migration and Globalization Studies at Fordham University.

Archbishop Auza, who said an estimated 21 million people are affected by some form of trafficking, including a growing number of men, noted the various ways trafficking manifests in countries around the world,  including using human beings as sex slaves in prostitution and pornography, forced labor, compelled participation in illegal activities, child soldiering, forced marriages and child brides, illegal adoptions, the stealing of children from pregnant women, organ harvesting, and human sacrifice.

“Women and girls have the added vulnerability in that, in still so many countries and regions in the world, they disproportionately constitute the poorest of the poor, discriminated against in education and health services, are the most affected by violence and conflict, and are disproportionately represented in the informal economy,” he said. “These disadvantages are push factors, making them more likely to migrate, usually irregularly, and more vulnerable to the guile of the traffickers.”

“The Holy See’s involvement in the fight against human trafficking is not new,” he said, citing Church documents dating back to 1965. “The Catholic Church has sought to fight to address its various causes, care for those it victimizes, wake people up to the disgrace, and work with anyone and everyone to try to eliminate it.”

The issue of human trafficking has grown in significance among the international community in the past decade, he said, noting the increase in the criminalization of human trafficking from 33 countries in 2002, to 158 countries in 2016. The issue is represented in a variety of platforms at the United Nations, including the 2030 Agenda for Sustainable Development, the New York Declaration on Refugees and Migrants and Security Council Open Debates. He said that while international attention and policies outlawing trafficking are important, more work is necessary to cut out the scourge at its root, especially for women and girls.

“The reality is that no country in the world has been immune to the scourges of human trafficking and other contemporary forms of slavery,” he said.

In a discussion with other leaders in the field following Archbishop Auza’s lecture, panelists confirmed that the United States is a breeding ground for trafficking. Jayne Bigelsen, Vice President of Advocacy at Covenant House International and FBI Special Agent Michael Osborn, who both work on the ground domestically to combat human trafficking attested that New York City is heavily impact by this crime against humanity, which especially targets its the most vulnerable residents, including migrants and homeless youth.

Bigelsen, who works to keep homeless youth from the hands of traffickers, said children and teens without family are specifically vulnerable since it is unlikely someone will look for them. She said homeless teens and young adults living in poverty are often coerced to exchange sex for a place to stay.

Osborn remarked that there are still many policy improvements to be made to abolish human trafficking, especially by increasing the penalties on traffickers. 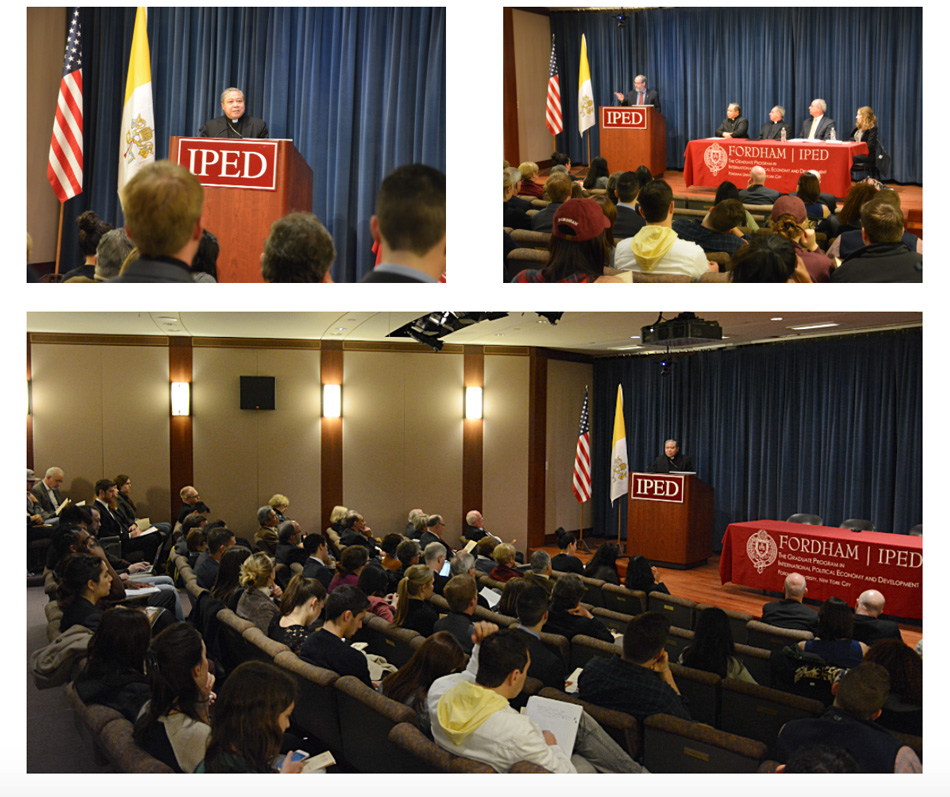 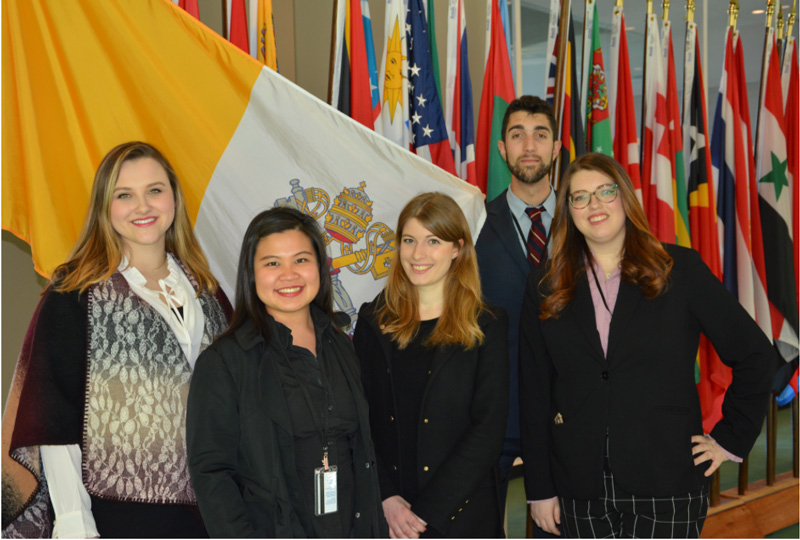 The internship program at the Permanent Observer Mission of the Holy See to the United Nations in New York provides the opportunity for bright young Catholic college graduates or graduate students to gain invaluable experience assisting the work of the Holy See in its multilateral work at the UN, seeking to bring the light of Catholic Social Teaching to the debates of the international community. 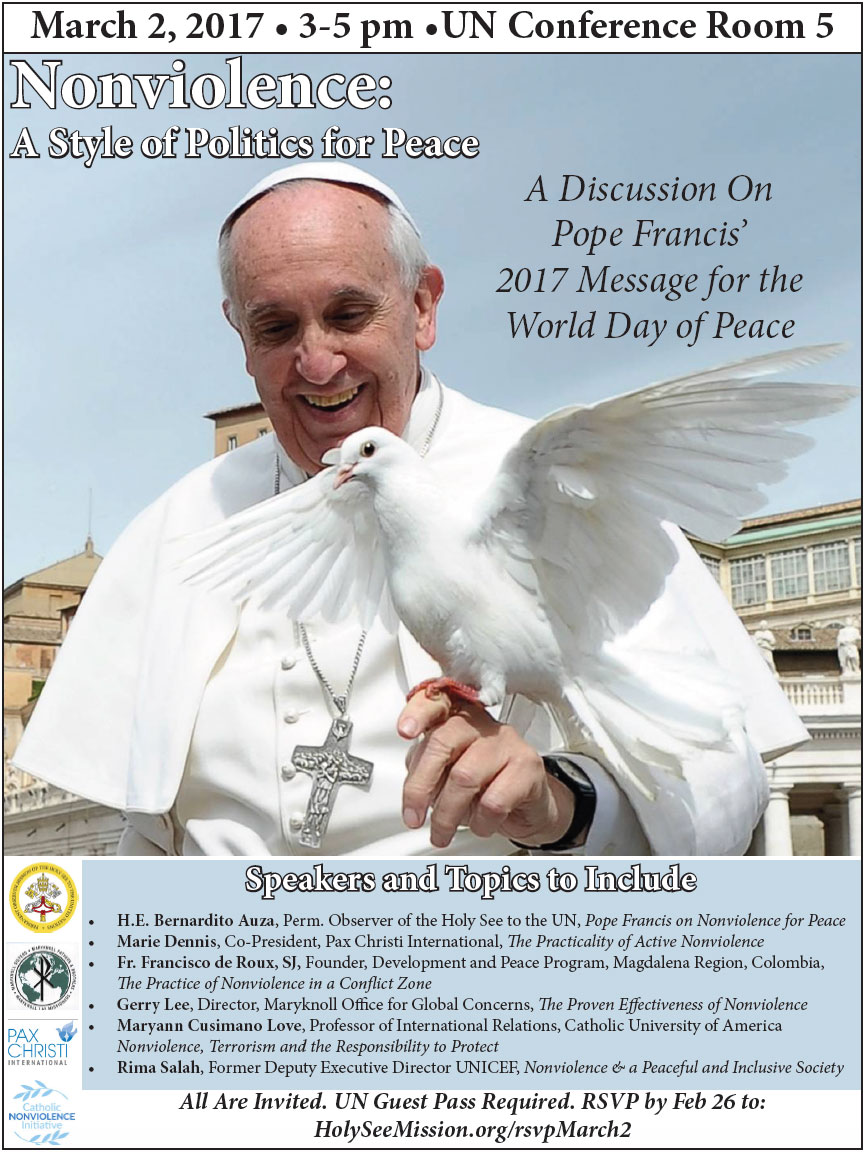 RSVP by February 26 at holyseemission.org/rsvpMarch2

RSVP  by March 17 at holyseemission.org/rsvpMarch22/Trafficking

RSVP  by March 17 at holyseemission.org/rsvpMarch23/FertilityAwareness

March 23: The Distinctiveness of Woman's Work and Her Empowerment

RSVP  by March 17 at holyseemission.org/rsvpMarch23/WomenWork

March 28: The Perspective of the Holy See on the UN Conference to Negotiate a Legally Binding Instrument to Prohibit Nuclear Weapons, leading toward their total Elimination

RSVP  by March 22 at holyseemission.org/rsvpMarch28

RSVP  by May 4 at holyseemission.org/rsvpMay10

RSVP  by May 8 at holyseemission.org/rsvpMay1