Our website is being upgraded and may show errors while we work. Please check back in a few hours.
Week of April 17, 2017

This week the Holy See Mission delivered four statements at the UN.
The Situation in the Middle East, Including the Palestinian Question
Security Council

On April 20, Archbishop Bernardito Auza, Permanent Observer of the Holy See to the UN, gave an intervention during the Security Council Open Debate on “The Situation in the Middle East, including the Palestinian Question.”

In his statement, Archbishop Auza said that the use of chemical weapons in Syria and the Palm Sunday terrorist bombings in Egypt have plunged parts of the Middle East to new lows of barbarism, attacking the very foundation of human dignity and rights. He said that the security of Lebanon and neighboring countries is being threatened by armed groups, risking the governability of the region. The Holy See reiterated its support for a two-state solution between Israel and Palestine negotiated between the Parties. The Holy See also urged religious leaders to speak out forcefully against the use of terror in the region and to control their followers who are claiming that God is behind their reign of terror. Archbishop Auza appealed to arms suppliers to act in accordance with internationally agreed upon norms, lest the weapons be used upon the innocent and to destroy crucial infrastructure. He said that Pope Francis’ April 28-29 visit to Egypt is meant to stress the importance of dialogue and encounter as an antidote to violence and hatred.

On April 18, the Permanent Observer Mission of the Holy See to the UN gave two interventions during the International Dialogue on Migration taking place at the Headquarters of the United Nations in New York.

In the first intervention, given during the panel discussion dedicated to “Implementing the SDGs and Other Major Frameworks: How the Global Compact on Migration can help meet our commitments,” the Holy See emphasized that the Sustainable Development Goals will be realized only if they are implemented fairly and effectively for all, including for migrants. The implementation of orderly, safe, regular and responsible migration requires addressing the drivers of forced migration, including environmental degradation, social and economic exclusion and the neglect of our neighbors’ most basic needs to education, work, housing, health care, peace and security. With regard to child migrants, the Holy See said that the international community must eliminate the conflict and violence that force people to send their children into flight and to protect them along their journey and at their destination.

In the second statement, given during the panel discussion on “Reaching a whole government approach to Migration: national and local perspectives,” the Holy See said that a comprehensive response to migration requires the integration of all government departments and ministries as well as the larger political community, civil society, international organizations and religious institutions. Respecting, protecting and promoting the rights of migrants is a moral imperative. Pope Francis, it added, has spoken of a “duty of civility,” which calls all, including migrants, to civic virtues and to respect the laws and traditions of the countries in which they are received. 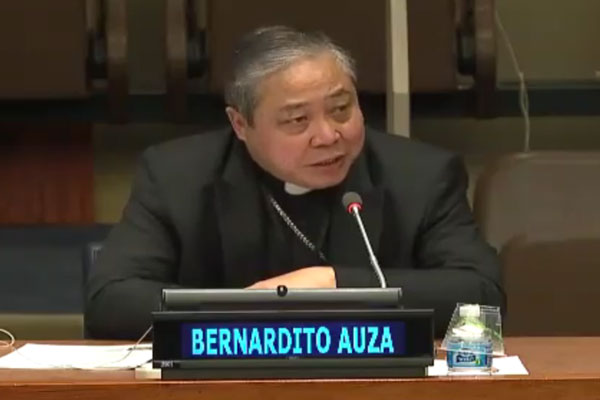 On April 19, Archbishop Bernardito Auza, Permanent Observer of the Holy See to the UN, gave a speech during a side event sponsored by the Holy See dedicated to “Protecting Endangered Cultural Heritage in Times of Conflict.”

Archbishop Auza structured his remarks on Pope Francis’ words at the end of his November 30, 2016 general audience in which he said that the theme of the protection of cultural patrimony in conflict zones is “dramatically current” and underlined that the protection of cultural riches is an “essential dimension of the defense of the human being” and a “new stage in the process of the implementation of human rights.” 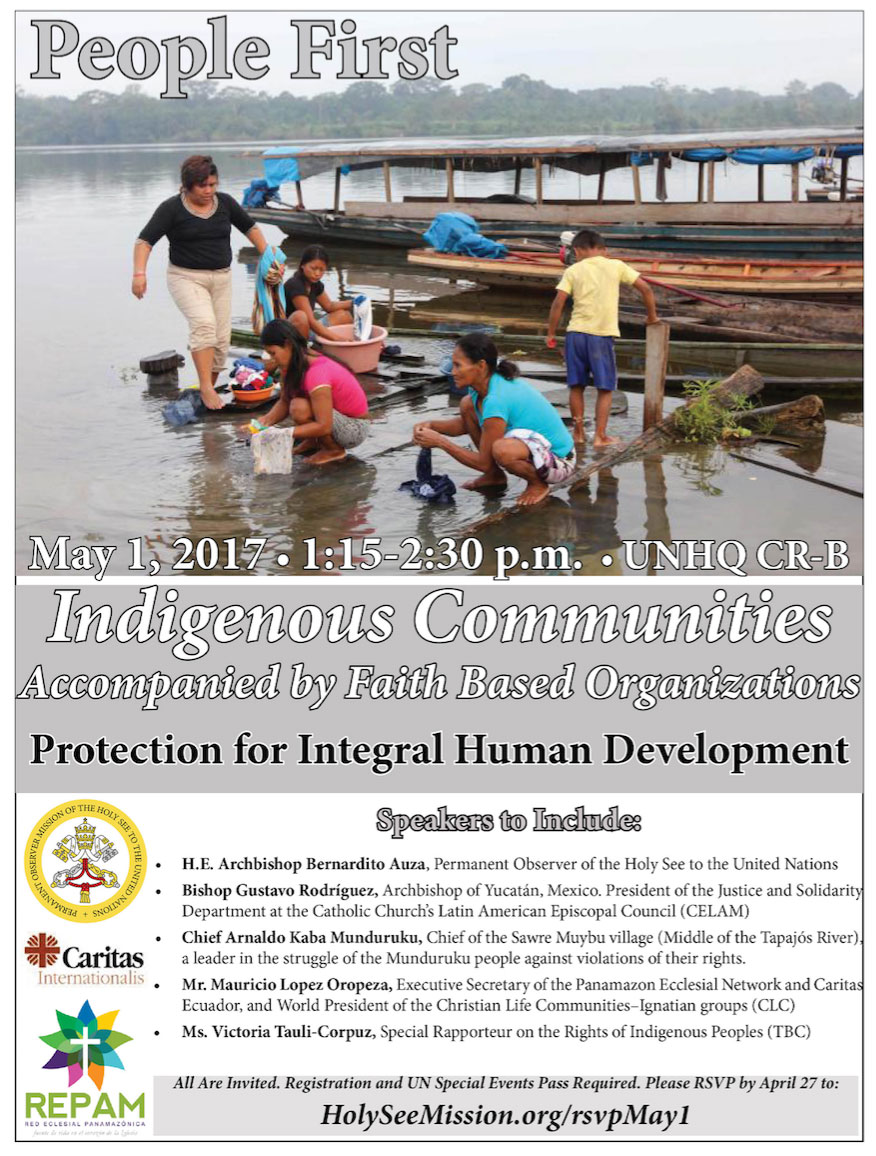 RSVP by April 27 at holyseemission.org/rsvpMay1 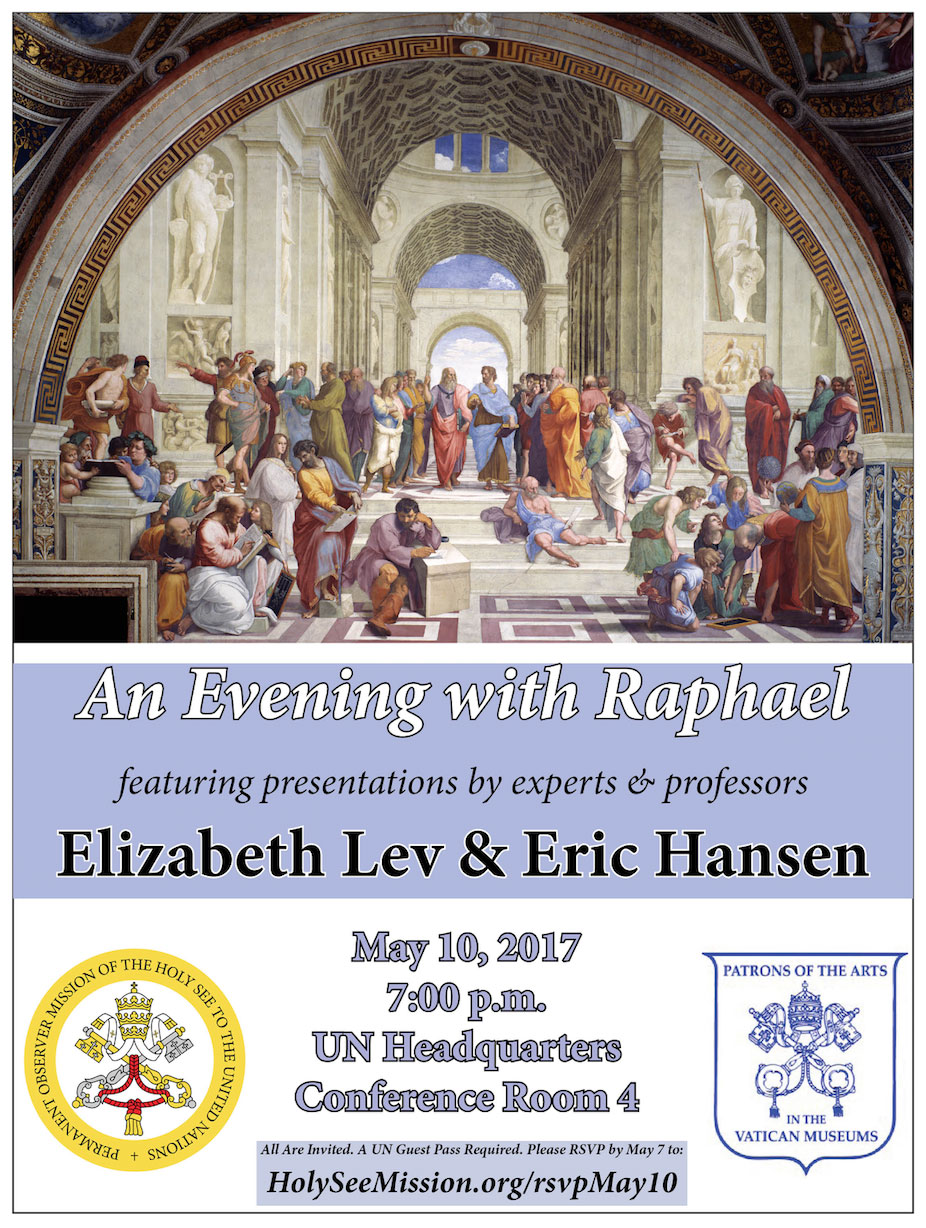