Our website is being upgraded and may show errors while we work. Please check back in a few hours.
Week of October 23, 2017

This week the Holy See Mission delivered 2 statements at the UN.

On October 25, Archbishop Bernardito Auza, Permanent Observer of the Holy See to the United Nations, gave an intervention during the debate of the Second Committee of the General Assembly dedicated to Agenda Item 24, entitled “Operational Activities for Development.”

In his intervention, Archbishop Auza praised the June report of the UN Secretary General António Guterres on repositioning of the UN development apparatus so that it may better advance the goals of the 2030 Agenda for Sustainable Development, saying that it will enhance the system’s effectiveness, cohesion, leadership and accountability. He said that the UN development system must better account for the local situations of those it is assisting, place their needs above process, donors’ national interests, and various forms of ideological colonization that fail to respond to the right to life and to freedom of religion, culture, history, beliefs and values of those in developing nations. Development aid should be given in ways consonant with the 2030 Agenda, Paris Agreement and the upcoming Global Compacts on Migration and on Refugees.

On October 27, the Permanent Observer of the Holy See to the United Nations, gave an intervention during the Security Council Open Debate on “Women, Peace and Security.”

In its statement the Holy See encouraged the international community to find new ways to implement the eight Security Council resolutions that aim to involve women in peace and security meditations and peacekeeping operations. The Holy See noted the  crucial role women played in ending the 52-year armed conflict in Colombia, but said that women, rather than being engaged as effective instruments of peace, disproportionately remain targets of violence as pawns of war. Many Catholic organizations work on the ground to provide access to education for women and girls, which is essential to helping all women, but especially those women and girls who are survivors of sexual violence in conflict, to advance. 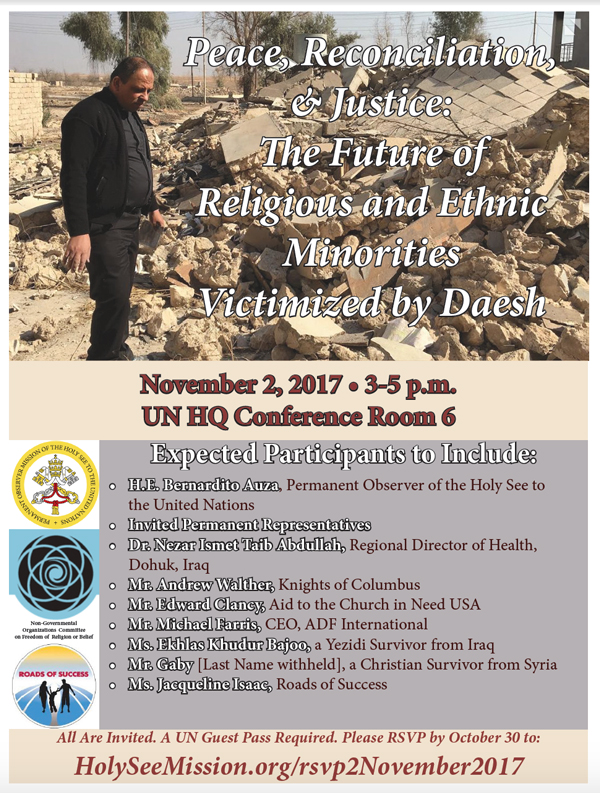