Our website is being upgraded and may show errors while we work. Please check back in a few hours.
June 1, 2018

Event on The Impact of Good
Parenting on Children and Society 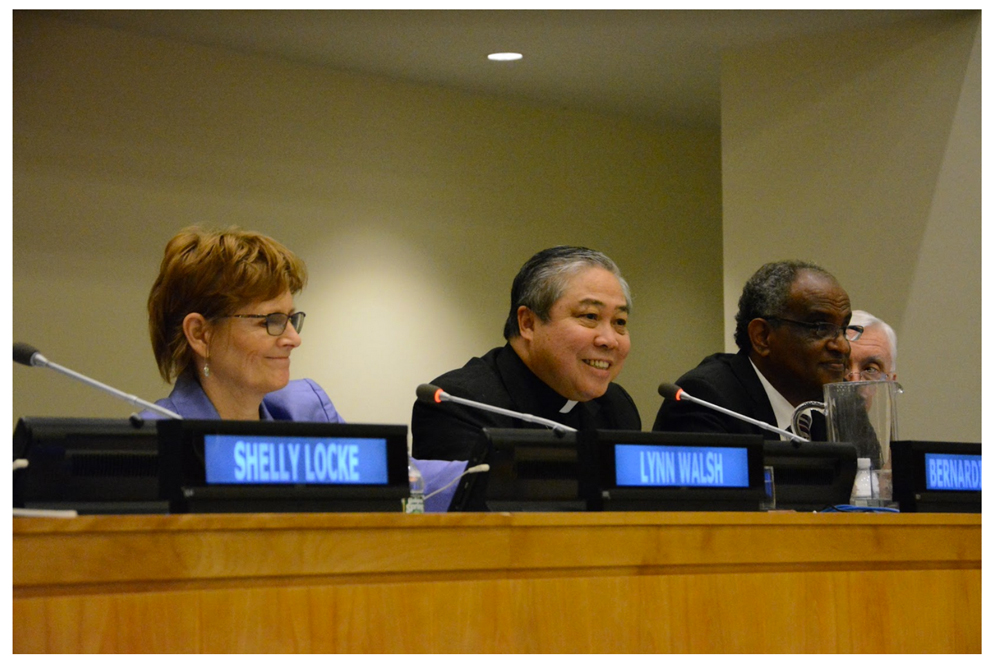 Experts at a Holy See Event stressed that good parenting is essential for peace.

On June 1, the Permanent Observer Mission of the Holy See to the UN, together with the Universal Peace Federation, held a conference at UN Headquarters entitled, “The Impact of Good Parenting on Children and Society: The Many Benefits of Nurturing Children’s Integrity in the Home.” The Conference was held to mark the June 1 Global Day of Parents, adopted by the United Nations in 2012.

Archbishop Bernardito Auza, Permanent Observer of the Holy See to the United Nations, highlighted that parents’ role in creating environments of peace in the home is the primary pillar for building communities of children who grow to become peace-seeking adults who will shape the future of the world.

“Good parenting is essential to achieve the biggest hopes that the international community strives to accomplish here at the United Nations,” Archbishop Auza said. “Since the future of the world passes by way of families today, parents and future parents need to be prepared, supported and encouraged to carry out their indispensable role, individually and mutually as a committed dynamic duo.

Lynn Walsh, Director of the Office of the Family for the Universal Peace Federation (UPF), served as moderator for the event and said, “The thriving family should be the rule not the exception.”

Tageldin Hamad, Vice President of the UPF, gave a brief history of the Global Day of Parents and highlighted the importance of parenting for the world’s major religions, which, he said, stems from a shared recognition of God as father. 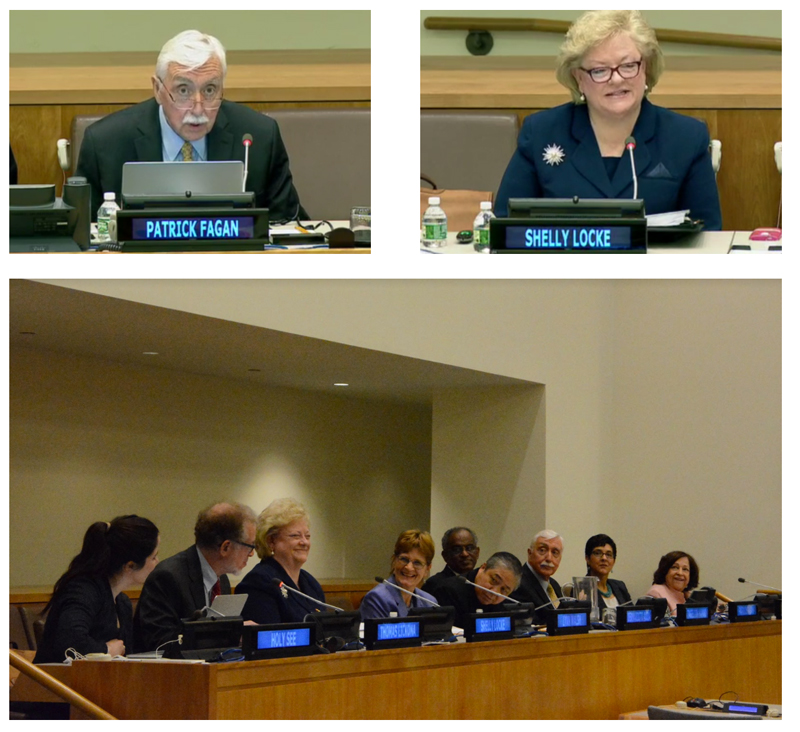 Dr. Pat Fagan, Director of the Marriage and Religion Research Institute, located at the Catholic University of America, highlighted the role of fathers as indispensable protectors, providers and affirmers for the family, poetically presenting his findings in the form of a letter from the “ideal father” to a son. The best way to fulfill each of these roles is by investing time in the family, he said.

“Money and time are interchangeable,” he said. “Figure out first what you want: more money or more time. If you choose time, your children will thank you. If you choose money, they may curse you.”

Shelly Locke, Attachment Specialist and Founding CEO of The Power of Motherhood, emphasized that the strong bonds that occur between mother and child during infancy are crucial to the child’s brain development, particularly the right brain, which controls human emotions.

Empathy is the most important virtue a child learns from his or her mother as an infant, she said, and this “shapes the child's character and ability to empathize in all future attachment relationships.”

Not only does the quality of empathy lead to good interpersonal relationships for the child, but also to stronger relationships with the outside community, she underlined.

Dr. Thomas Lickona, Professor at the State University of New York in Cortland, said that an intact family is the best place to raise children of good character who will be most likely to serve the world in an altruistic way. He shared a study in altruism that compared the family structures of people who rescued Jews from the Nazi Holocaust compared to those who lived in the same Nazi-occupied countries but did not rescue those outside their family or ethnicity. Good parenting made all the difference.

“Rescuers’ parents were much more likely to explicitly teach a positive attitude toward different cultures and religions—and the obligation to help others generously,” he said, implying that this finding reveals that “families must take deliberate steps to create a family culture that is strong enough to withstand the toxic influences of the wider culture.” 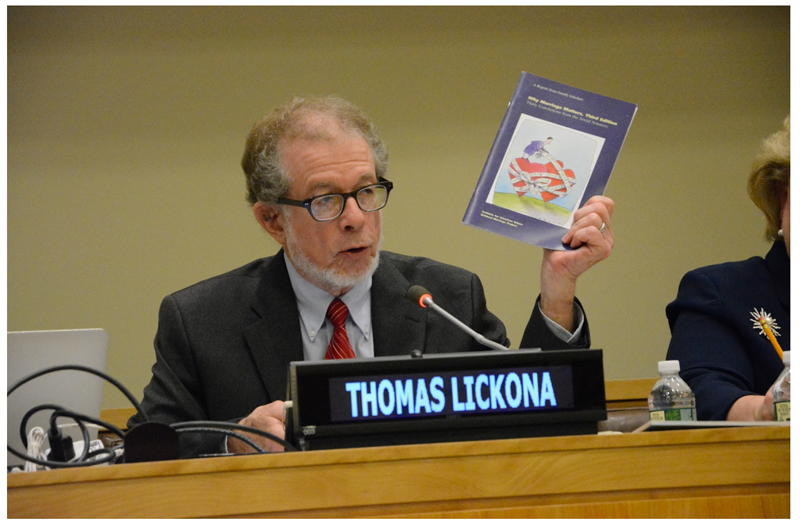 An International Perspective of Healthy Families

Ambassador Katalin Bogyay, Permanent Representative of Hungary to the UN, said that her country considers the family the foundation of society, which lead to stable individuals and communities. For this reason, and to encourage Hungarians to have children in the country’s disproportionately aging population, Hungary has a robust family policy to support parents and children, including parental leave for up to three years.

“The supportive family is the best guarantee for children to grow. We believe if a child's value system is based on family values, the child will have more affinity to understand other people in families and countries around the world,” Ambassador Bogyay said, emphasizing that strong families will lead to peace-minded adults, especially among the most vulnerable children, like those in foster families.

In countries where conflict and political uncertainty reign, or families are in transit, many parents cannot rely on government protection to ensure basic needs, let alone thriving childhoods for their children. 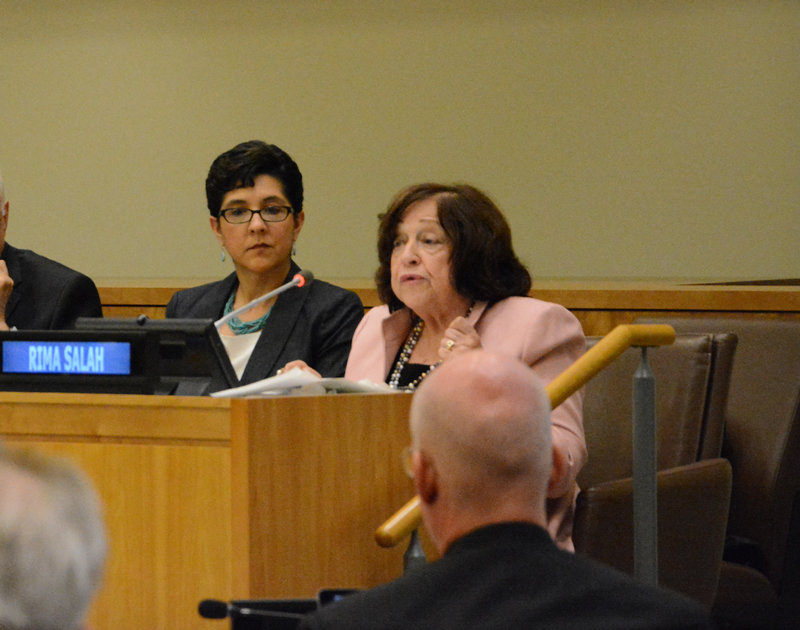 Dr. Rima Saleh, Assistant Professor in the Child Study Center at the Yale School of Medicine, stressed the importance of early childhood intervention, especially for the 250 million of the world’s most vulnerable children who live in at risk conditions in low and middle income countries. Many of them fail to reach their developmental potential due poverty, conflict, political instability, poor health, and inadequate education. 50 million of the world’s migrants and refugees are children, 40 million of whom have been uprooted from their homes by violence.

“In the absence of a protective system, it is the family, the parents, who emerge to build a protective environment for the children,” said Dr. Saleh. Parents can, and do, find creative ways to provide the best possible development for their families, despite conditions of war, poverty or displacement.

In Cote d’Ivoire, a small group of mothers from warring ethnic backgrounds were involved in the same early childhood development program, in which families shared knowledge for raising their children in situations of conflict. Not only did participating families learn better principles in rearing children for peace, Saleh asserted, but they also built harmonious relationships with families from opposing tribes, uniting as parents who all desire to build happy families for their children.

“We are not the same people who we were before. We are mixed,” said one mother, whom Dr. Saleh studied. “Now my kids are in safety and we can be at peace.”

Saleh implored the international community to do more to support families and children in these vulnerable situations, and asked them to follow through on commitments to peace outlined in the 2030 Agenda for Sustainable Development and the New York Declaration on Migrants and Refugees.

While these ending longstanding conflicts throughout the world is lofty goal, “There is nothing too ambitious for the cause of children and the cause for peace,” she said.

Dr. Melissa Moschella, Assistant Professor of Medical Ethics at Columbia University, highlighted the international debate on who has primary authority for children, and argued that parents, and not the state, have primary authority.

Authority over children must belong to “whoever has the strongest and most direct responsibility for the child’s well-being,” she said.

Just as the international community can only intervene in another nation’s internal affairs when serious human rights violations or threats to international peace occur, so a state should only have authority to overstep parents’ authority only in the cases of abuse, neglect or serious threat to the public order, she said.

Outlawing homeschooling is one violation of this right of parents as primary providers to a child’s education, and Dr. Moschella called for minimal state interference with private and home schools.

The event was held in Conference Room 1 at United Nations Headquarters and was attended by about 150. 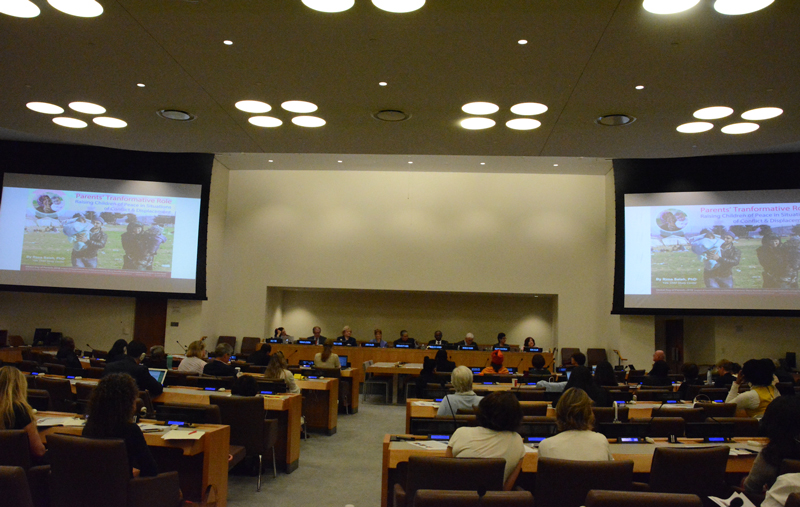 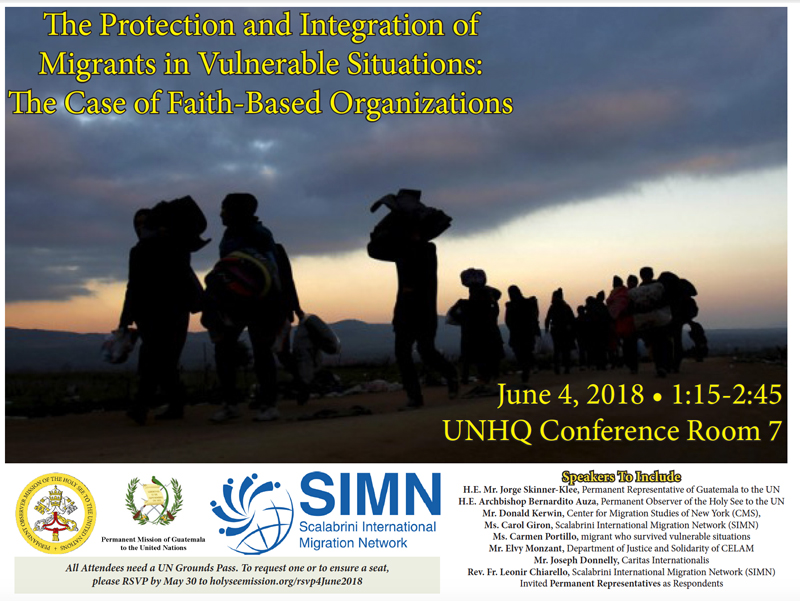 Protection and Integration of Migrants in Vulnerable Situations:
The Case of Faith-Based Organizations

Registration for those without a UN Pass is closed.