Our website is being upgraded and may show errors while we work. Please check back in a few hours.
October 4, 2019 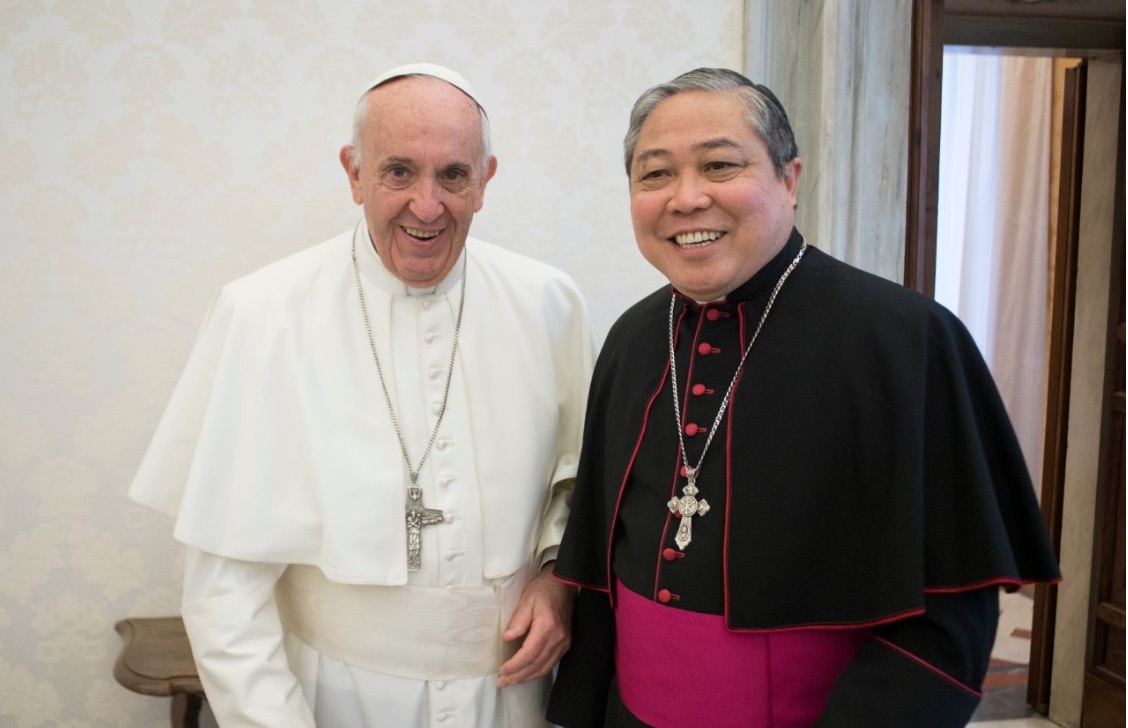 On October 1, Pope Francis appointed Archbishop Bernardito Auza as Apostolic Nuncio to the Kingdom of Spain and the Principality of Andorra.

During his years of service as Permanent Representative to the United Nations, Archbishop Auza welcomed Pope Francis to the United Nations on September 25, 2015, and participated in the negotiations that led to the adoption of various international documents, such as the 2030 Agenda for Sustainable Development, the Addis Ababa Action Agenda on Financing for Development, the Paris Agreement on Climate Change, the Treaty on the Elimination of Nuclear Weapons, the Global Compact on Safe Orderly and Regular Migration and many other multilateral achievements.

During the tenure of Archbishop Auza, the Holy See Mission has been active in organizing an average of 20 conferences a year at the United Nations on the scourge of human trafficking, the persecution of Christians and religious minorities in the Middle East and elsewhere, the right to religious freedom, the importance of fathers and mothers, the defense of the rights of indigenous people in the Amazon, the protection of migrants and refugees, the peace process in Colombia, interreligious dialogue as an essential component of peaceful and inclusive societies, the right to life, the advancement of women, and more.

Archbishop Auza will spend October and November finishing up his duties in New York before arriving to begin his new responsibilities in Madrid on December 1.

Archbishop Auza will not be a stranger to Spain, having been educated by Spanish Dominican Friars in Manila and Rome, and having traveled extensively throughout the country. He speaks Spanish fluently.

No appointment has been made as to who will succeed him as Permanent Representative of the Holy See to the United Nations. Archbishop Auza will remain as Head of Mission until he departs for Spain. After that, until a new Permanent Representative is appointed, arrives in New York, and presents his credentials to the U.N. Secretary-General, Msgr. Fredrik Hansen, the diplomat with the highest seniority in the Mission, would be Chargé d’affaires ad interim.

Archbishop Auza is a native of Talibon, Philippines. He was ordained a priest of the Diocese of Tagbilaran in June 1985. A year later he was incardinated in the newly created Diocese of Talibon. He earned a Doctorate in Sacred Theology in Rome and entered the diplomatic service of the Holy See in 1990. He served at the Apostolic Nunciatures in Madagascar, Bulgaria and Albania before serving for a number of years in the Secretariat of State in the Vatican.

Archbishop Auza describes his more than seven years of service of the Holy See to the United Nations as “intense years of learning and understanding more deeply the great international questions of our time.” They were also years of “knowing and working with the Catholic Church in the tri-State area” (New York/New Jersey/Connecticut) and beyond, in particular in ministering to the Filipinos and other migrant communities. He expressed “profound gratitude to Cardinal [Timothy] Dolan,” Archbishop of New York “to all the other Bishops with whom I have worked, to all the priests, men and women religious and all the people of God for their kindness, welcome and great spirit of collaboration and fraternity.”

He said he looks forward “with enthusiasm” to working and exercising his priestly and episcopal ministries in Spain and Andorra.

On October 1, Archbishop Bernardito Auza, Permanent Observer of the Holy See to the UN, gave an intervention the Seventy-fourth Session of the United Nations General Assembly Third Committee on Agenda Item 25 (a, b) dedicated to "Social Development."

In his statement, Archbishop Auza noted that people are still excluded and rejected by society. This is particularly the case for elderly, persons with disabilities, youth and their families, and others who are in most need of our support and assistance. What is needed for social development is to enable men and women to be dignified agents of their own destiny, he said. "This dignity," he stated, "is essential to the development of the human person.” He highlighted the necessity of creating opportunities for the elderly, the disabled and young people, through education and employment, so that they do not fall victim to discrimination or marginalization. Protecting those who are vulnerable in our societies through promoting their inclusion and integration is vitally important and essential for true social development, he stated.

His statement can be found here: