Our website is being upgraded and may show errors while we work. Please check back in a few hours.
October 16, 2020 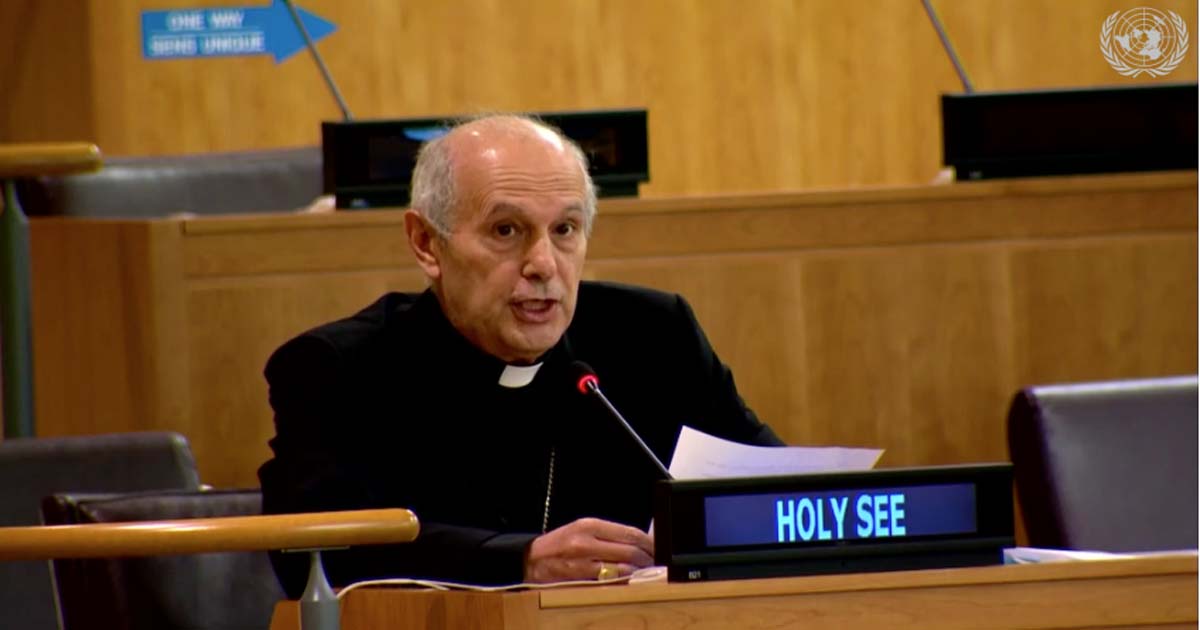 NEW YORK —  On October 12, Archbishop Gabriele Caccia, Permanent Observer of the Holy See to the United Nations in New York, gave a statement during the debate of Sixth Committee of the 75th Session of the United Nations General Assembly dedicated to Agenda Item 114 on "Measures to Eliminate International Terrorism."

In his intervention, Archbishop Caccia said that terrorism violated human dignity and fundamental human rights and threatens international security and sustainable development. The fight against terrorism, he stated, must include respect for human rights and scrupulous adherence to international human rights law and international humanitarian law. He expressed concern over anti-terrorism measures hindering humanitarian aid to suffering civilian populations. He called for multilateral cooperation based on the four pillars of the Global Counter Terrorism Strategy and welcomed the recent increased attention given to cyber-terrorism. He stated that greater attention must be given to the root causes of terrorism, such as lack of education, severe economic disparities, lack of respect for minorities and for freedom of conscience, religion and belief.

Archbishop Caccia
at the Joint General Debate of the Fourth Committee 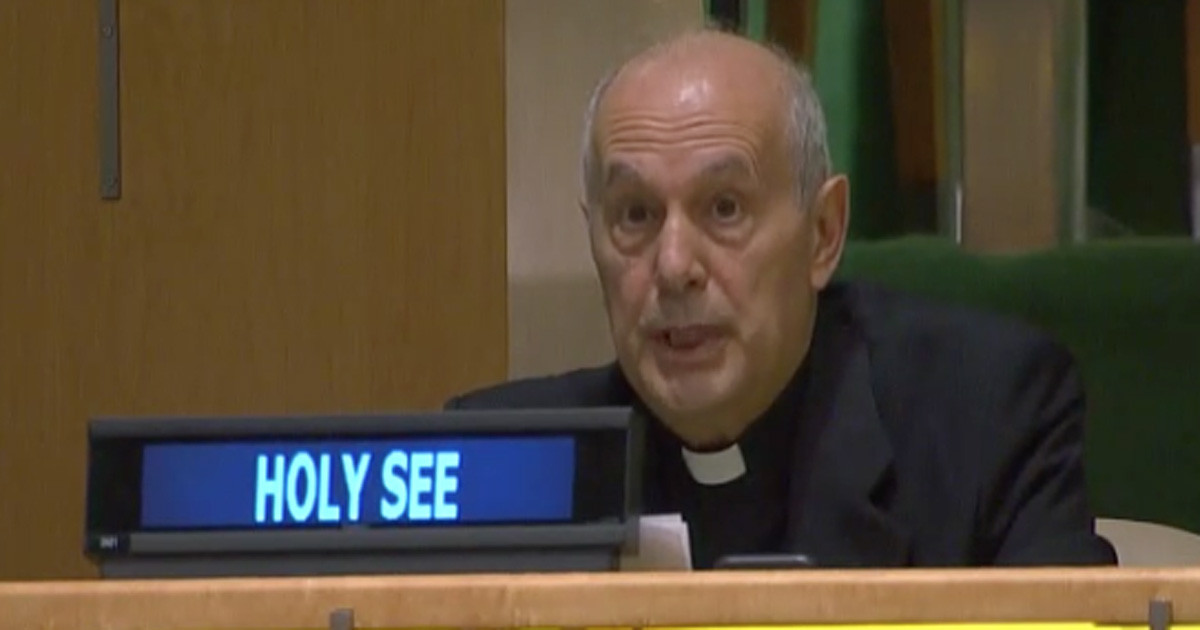 NEW YORK — On October 16, Archbishop Gabriele Caccia, Permanent Observer of the Holy See to the United Nations in New York, gave a statement during the Joint General Debate of the Fourth Committee of the 75th Session of the United Nations General Assembly.

The Fourth Committee concerns special political issues. It considers a broad range of issues covering a cluster of five decolonization-related agenda items, the effects of atomic radiation, questions relating to information, a comprehensive review of the question of peacekeeping operations as well as a review of special political missions, the United Nations Relief and Works Agency for Palestinian Refugees in the Near East (UNRWA), the Report of the Special Committee on Israeli Practices and International cooperation in the peaceful uses of outer space. In addition to these annual items, the Committee also considers the items on assistance in mine action every two years and the University for Peace every three.

In his statement, Archbishop Caccia addressed agenda items dedicated to international cooperation in the peaceful uses of outer space, UNRWA, and peacekeeping operations.

With regard to the peaceful uses of outer space, he spoke about the great advances made with regard to satellites assisting navigation, supporting global communications, and monitoring the weather, but said that an internationally agreed framework must be adopted to address potentially conflicting uses of outer space and the dangerous accumulation of space debris. He highlighted two elements of last years UN Resolution on the Peaceful Uses of Outer Space (A/RES/74/82): the connection between peaceful use of outer space and sustainable development and considering UN-SPIDER as a precedent for international security.

Concerning UNRWA, he noted that the pandemic has made the life of Palestine refugees more difficult. The ongoing conflict in Syria has displaced two-thirds of the Palestine refugee population at least once since 2011. He praised UNRWA for its work in sanitation, healthcare, education, family support, and housing rehabilitation and urged that the financial pledges of States will match the commitments made by the international community.

On peacekeeping, he noted how the pandemic has made not just those living in post-conflict or unstable political situations more vulnerable, but also UN peacekeepers, as some have equated foreigners with carriers of the virus. That situation adds to the pressures, security threats and attacks those with blue helmets are undergoing in various locations. The Holy See strongly condemns all violence against UN peacekeeping personnel and summoned the international community to make a long-term financial investment to these peacekeeping efforts. He recalled the 20th anniversary of Security Council Resolution 1325 on Women, Peace and Security and said that States must rededicate themselves to protecting women and children from sexual violence during armed conflict and ensuring fair and unbiased prosecution of sex abusers among UN field workers. He also said that women ought to be included in all aspects of the peace process.

Archbishop Caccia on the
Eradication of Poverty and
Other Development Issues 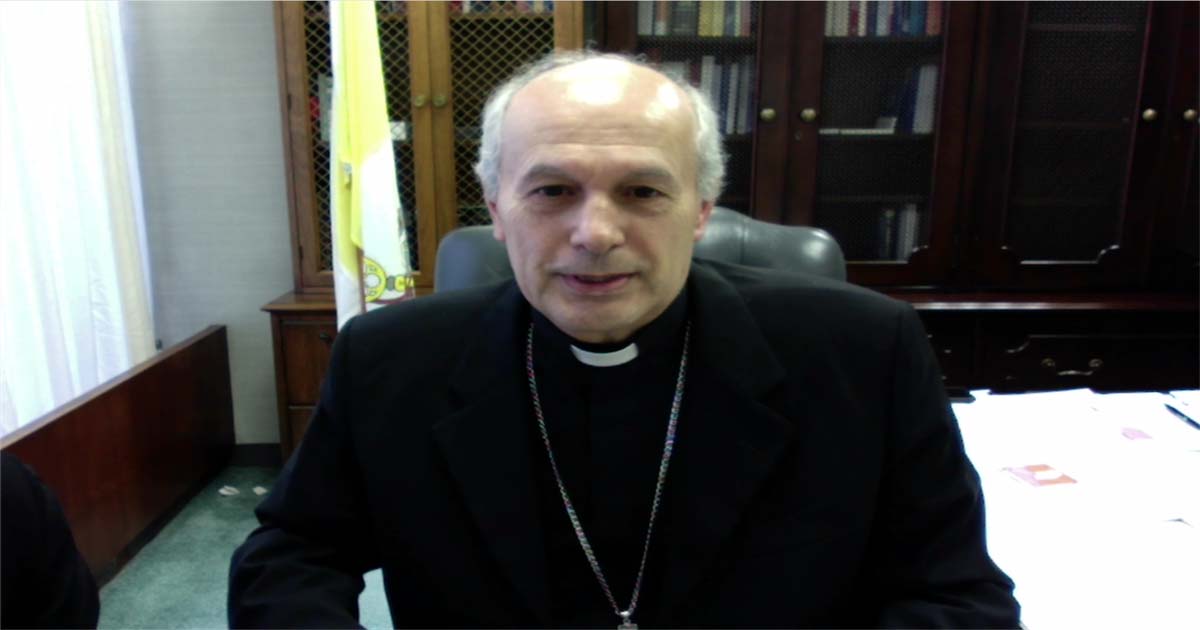 NEW YORK — On October 13, Archbishop Gabriele Caccia, Permanent Observer of the Holy See to the United Nations in New York, gave a statement before the Third Committee of the 75th Session of the United Nations General Assembly on Agenda Item 24, dedicated to the "Eradication of Poverty and Other Development Issues."

In his statement, Archbishop Caccia described how the scourge of poverty continues to plague the international landscape despite the 2030 Agenda for Sustainable Development and the international community's pledge to leave no one behind. COVID-19 can add 100 million more people to those in extreme poverty, he said, quoting a World Bank estimate. 200 million people have lost jobs because of the pandemic, dropping many others into poverty and making the rise from poverty more arduous he added. The shutdown of many educational facilities makes poverty reduction more challenging. He called attention to the difficulty many of the poor have to access health care and medicines and urged the international community to foster development models that keep the poor at the center as dignified agents of their own destiny. 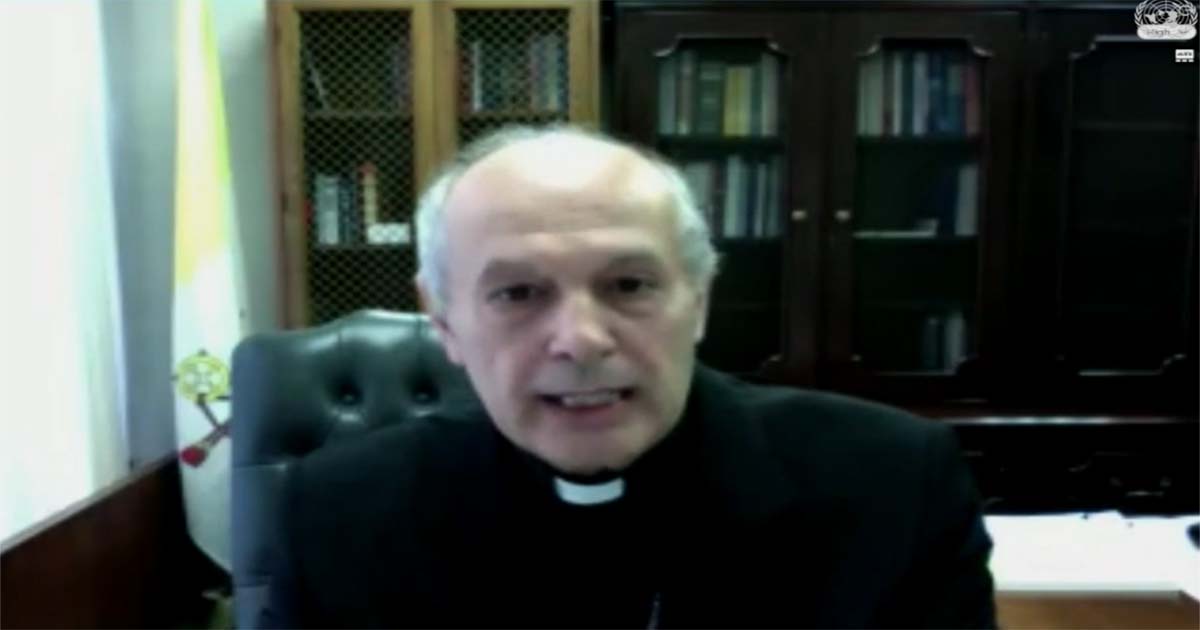 NEW YORK — On October 13, Archbishop Gabriele Caccia, Permanent Observer of the Holy See to the United Nations in New York, gave a statement before the Second Committee of the 75th Session of the United Nations General Assembly on Agenda Item 19, dedicated to "Sustainable Development."

In his statement, Archbishop Caccia spoke within the context of Sustainable Development Goal 13 on Climate Action, saying that protecting our common home for present and future generations is one of the most urgent demands of our time. He said the the international community must continue to address climate change, natural disasters and environmental degradation on three levels: mitigation, adaptation and disaster risk reduction: mitigation involves the common fight to reduce greenhouse gas emissions. adaptation focuses on preventing or minimizing the damage caused by the adverse effects of climate change through strengthening socio-economic structures and increasing the resilience among peoples and communities; disaster risk reduction involves harmonizing the Paris Agreement and the Sendai Framework.

But there's a need for more than technical solutions, he added. The human face of those impacted by climate change cannot be forgotten. Climate change is not an abstract environmental question but something already destabilizing vulnerable economies, societies, agricultural and food systems and many lives.

He pledged the Holy See's continued commitment to the protection of our common home, something he says was illustrated by the Holy See's ratification of the Kigali Amendment to the Montreal Protocol and by the many projects of Catholic institutions and faith-based organizations worldwide. 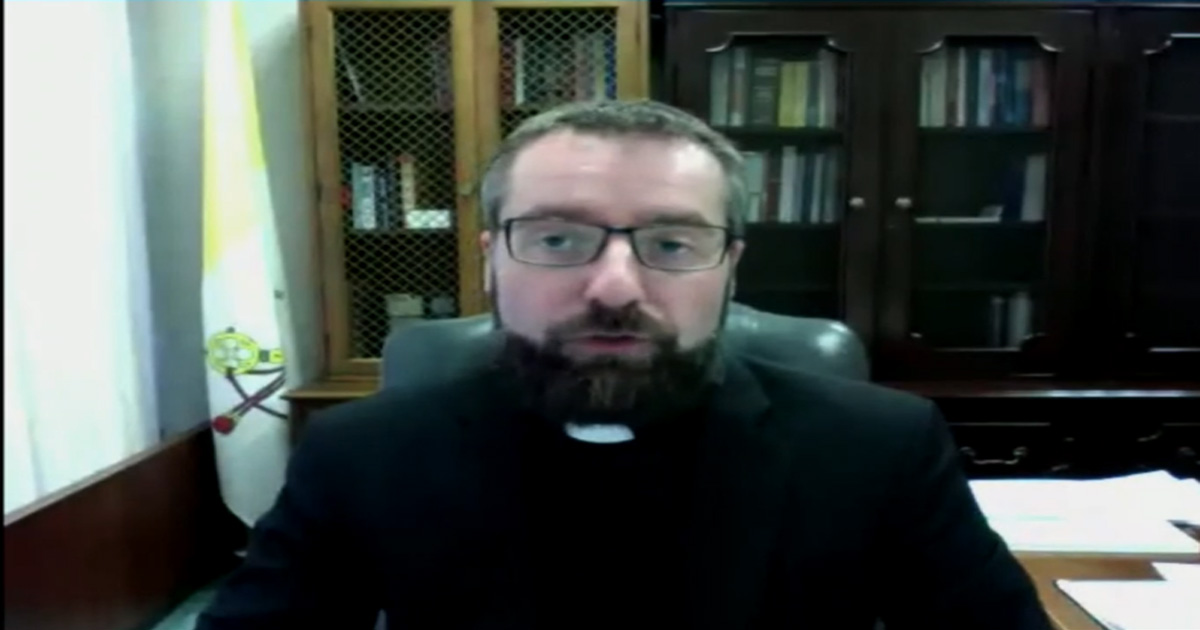 NEW YORK — On October 16, Archbishop Gabriele Caccia, Permanent Observer of the Holy See to the United Nations in New York, gave a statement before the Second Committee of the 75th Session of the United Nations General Assembly on Agenda Item 26, dedicated to "Agricultural Development, Food Security and Nutrition."

In his statement, Archbishop Caccia spoke within the context of the beginning of the Decade of Action for sustainable development and the half-way mark on the UN Decade of Action on Nutrition. He said that ending hunger, achieving food insecurity, improving nutrition and promoting sustainable agriculture must remain high priorities for the international community. Poverty and hunger, he said, must be tackled together, combining economic inclusion, social protection and support for sustainable livelihoods. The scandal of people dying of hunger while so much food is going to waste must be addressed, he said, through equitable distribution. The question of the quality of food, he said, is also important, so that people with access to food are genuinely nourished with a healthy diet. He described how the pandemic has made more dramatic the situation of malnutrition and food insecurity in multiple ways and reaffirmed the Holy See's commitment to work toward ensuring that everyone has access to one's "daily bread."

To read the text of the intervention, delivered by Msgr. Fredrik Hansen, please click here.

The United Nations at 75: Catholic Perspectives 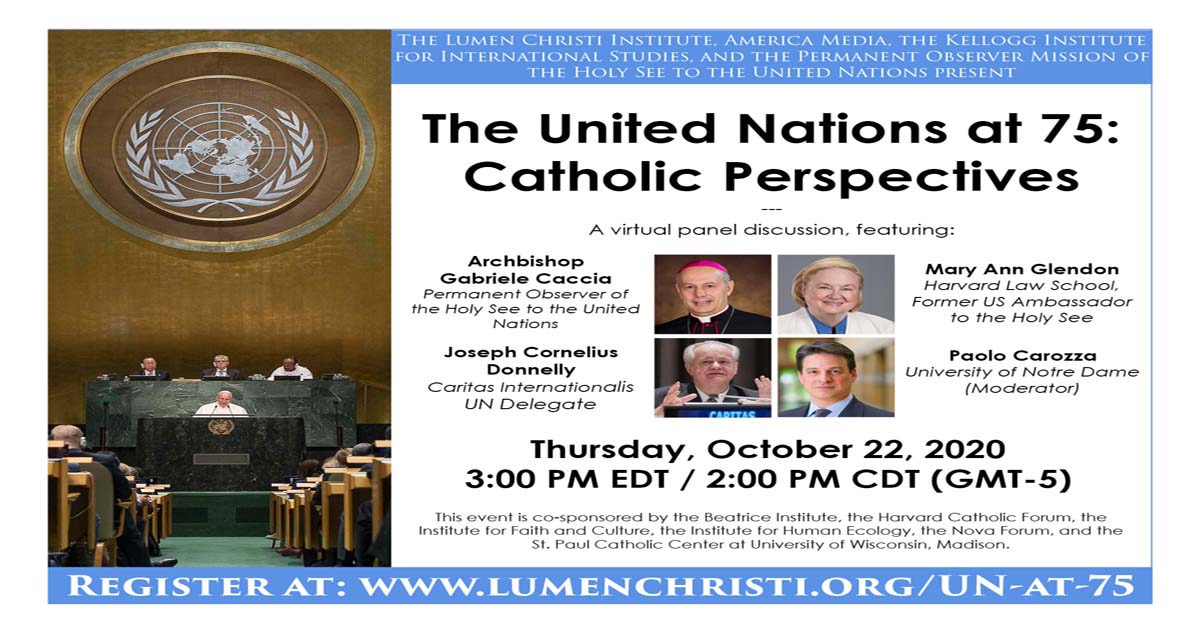 The event will begin at 3 pm Eastern Daylight Time.

Registration is free and open to the public.

Moderated by Dr. Paolo Carozza (Notre Dame), this event will feature the participation of Archbishop Gabriele Caccia, Permanent Observer of the Holy See to the United Nations; Joseph Cornelius Donnelly, Delegate of Caritas Internationalis to the UN; and Ambassador Mary Ann Glendon, former US ambassador to the Holy See, Learned Hand Professor of Law Emerita at Harvard Law School and Chairperson of the U.S. State Department’s Commission on Unalienable Rights.

A Faith-Based Vision for the UN at 75 and Beyond

NEW YORK — On October 21, from 10:00-11:30 am, Archbishop Gabriele Caccia will participate in the virtual event entitled "A Faith-based Vision for the UN at 75 and Beyond," sponsored by the Maryknoll Office for Global Concerns.

Those who would like to participate are asked to register by October 20.

The event will be moderated by Dr. Despoina Afroditi Milaki, NGO Representative at the UN of the International Presentation Association. 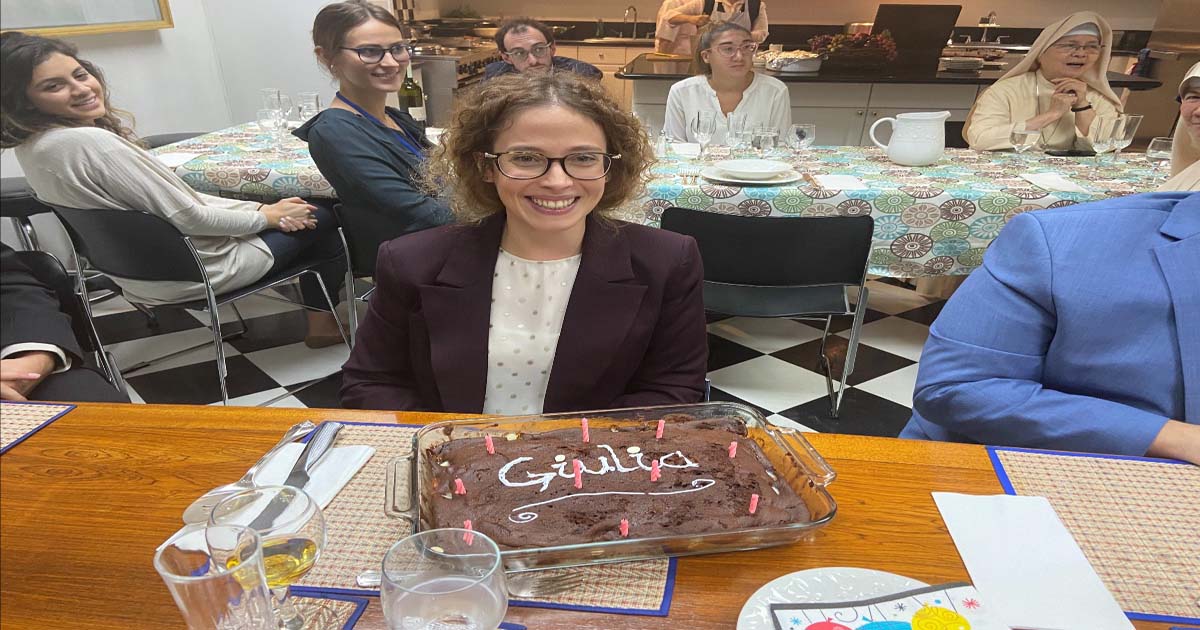 On October 16, the Holy See Mission staff celebrated the birthday of one of its negotiators, Giulia Maniezzi, with a cake prepared by Msgr. David Charters. Here Giulia catches her breath after extinguishing the candles and rejoices in another year of the gift of life.