Our website is being upgraded and may show errors while we work. Please check back in a few hours.
October 23, 2020 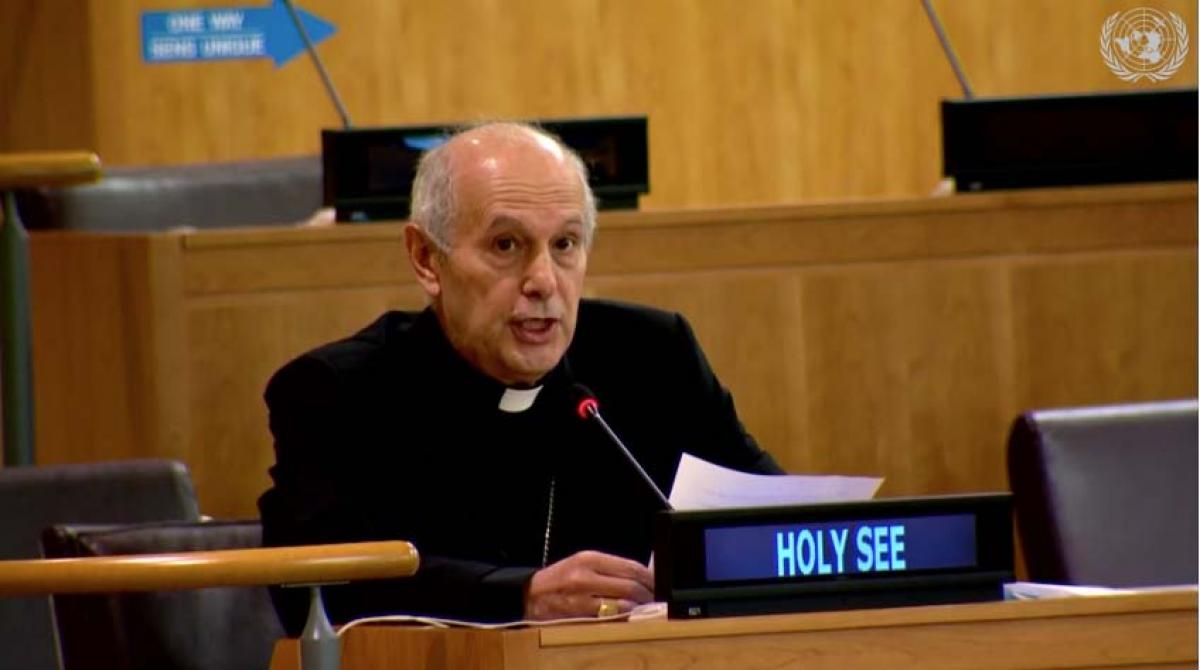 NEW YORK — On October 19, Archbishop Gabriele Caccia, Permanent Observer of the Holy See to the United Nations in New York, gave a statement during the General Debate of the First Committee of the 75th Session of the United Nations General Assembly.

The First Committee deals with disarmament, global challenges and threats to peace that affect the international community. It considers the general principles of cooperation in the maintenance of international peace and security, the principles governing disarmament and the regulation of armaments, the promotion of cooperative arrangements and measures aimed at strengthening stability through lower levels of armaments.

In his statement, Archbishop Caccia recalled Pope Francis' words in Nagasaki last November on how one of the deepest longings of the human heart is for security, peace and stability, a yearning that cannot be fulfilled through nuclear and other weapons of mass destruction or through the mentality of fear and mistrust on which they're based. To pursue arms, Archbishop Caccia said, is contradictory to advancing dialogue. He recalled the history of the push for general and complete disarmament from the UN's beginning. The progress made, he said, has given way in recent years to backsliding on agreements and growing rivalries among global and regional powers and the geostrategic environment has become even more dangerous because of the risks flowing from artificial intelligence, tensions in interstate behavior, hypersonic vehicles, nuclear powered missiles and other new technologies. He expressed concern that modernization programs imply decades more reliance on nuclear weapons rather than progress toward complete and general disarmament.

Archbishop Caccia said that the fiftieth anniversary of the entry into force of the Treaty on the Non-Proliferation of Nuclear Weapons (NPT) is an important milestone and that the rescheduled Review Conference an opportunity for concerted action to make the world free of nuclear weapons. He also said that the COVID-19 pandemic has shown light on the how the resources dedicated toward weapons could be better used.

On behalf of the Holy See, Archbishop Caccia recommended that: 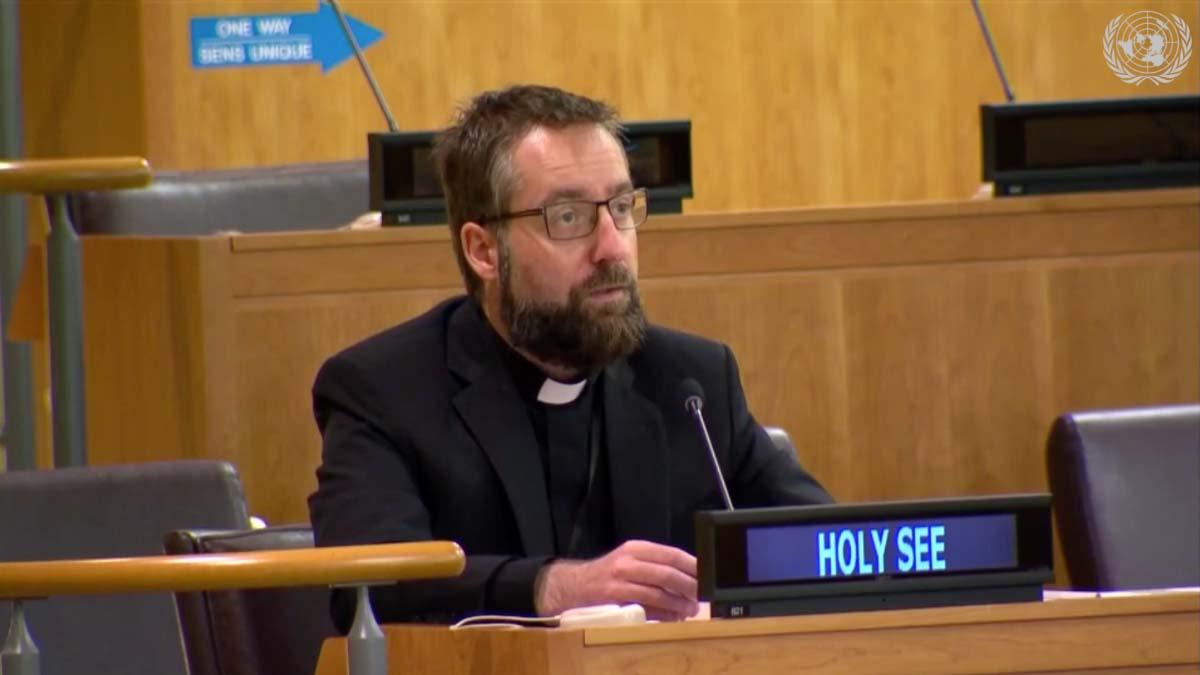 Monsignor Fredrik Hansen delivers Archbishop Caccia's statement on the Rule of Law at the National and International Levels in the General Assembly Hall on October 22.

NEW YORK — On October 22, Archbishop Gabriele Caccia, Permanent Observer of the Holy See to the United Nations in New York, gave a statement before the Sixth Committee of the 75th Session of the United Nations General Assembly on Agenda Item 86, dedicated to "The Rule of Law at the National and International Levels."

In his statement, Archbishop Caccia said that international treaties are central to good relations among States, to the rule of law internationally, and to the protection of universal human rights within States. To achieve their purpose, however, he said that treaties must be interpreted and observed faithfully. He offered three comments on their application. First, no State can be held to a treaty it did not ratify and States are obliged to keep only those commitments set forth in their text. Second, he said, for this reason,  States are urged to maintain legal clarity in draft resolutions when referencing international treaty provisions. Third, only the States Parties can amend the text of a treaty, he stated, according to the rigorous procedures for amendments. Lastly, he concluded, only the States Parties can interpret, further develop or broaden treaty texts.

To read the text of his intervention, which was delivered by Msgr. Fredrik Hansen, please click here.

Archbishop Caccia speaks at Side Event
"Faith Speaks to UN 75" 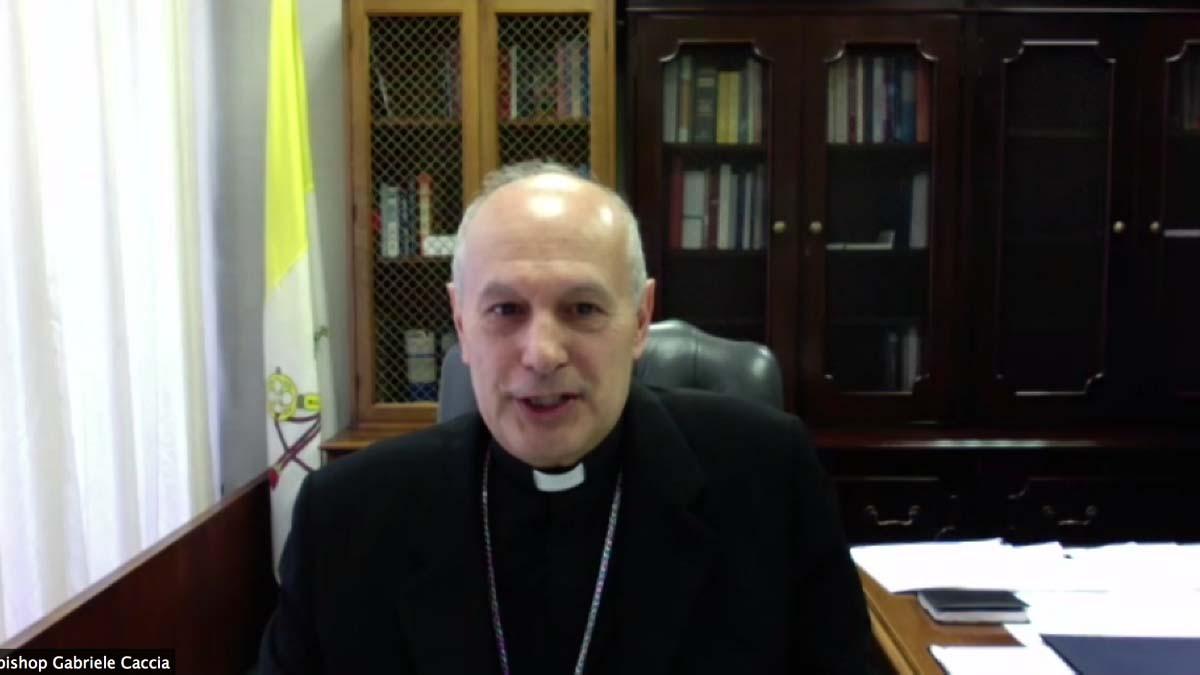 The side event was sponsored by fourteen different faith-based Non-Governmental Organizations accredited to the United Nations and moderated by Dr. Despoina Afroditi Milaki, NGO Representative to the UN of the International Presentation Association.

In his remarks, Archbishop Caccia stressed that the world is profoundly religious, with 85 percent of the people of the world professing faith in God and affiliated with a religion. He said it was unsurprising that the UN campus in New York bears unmistakable testimony to the profoundly religious reality of the world, in so many monuments and works of art, all of which show the importance and influence of religion at the United Nations.

He said that the Universal Declaration of Human Rights, adopted in 1948, proclaims everyone’s right to freedom of thought, conscience and religion, and said that fundamental freedom brings with it a duty, not just on individuals and States but also the international community, to respect, value and protect this right. The more this respect is given, he said, the stronger the UN will be and the better the world will be. He illustrated the point by highlighting the contributions of people of faith to the fulfillment of the four pillars of the UN Charter.

He said that much of the work of faith actors and organizations is appreciated and warmly embraced by the international community, but pointed to a few ways in which a faith-based vision is considered by some a threat.

The first is with regard to religious freedom, threatened not only by attacks on believers across the world, but also occasionally found conceptually even within the UN system, when some try to reduce religious freedom to freedom of worship in order to promote other so-called human rights not found in the UDHR, do not enjoy consensus and against the beliefs of most world religions. The second, he said, happens when believers call upon States and the international community to stay consistent to its principles with regard to human dignity and the commitment to leave no one behind. The third, he added, concerns the transcendent dimension of the human person, which challenges modern materialism and tendencies toward technocracy, but is essential for recognizing human dignity, and bringing about a fraternal world and a family of nations. Conscious of this transcendent dimension, people of faith, he said, must not just work but turn to God and implore the blessings the world needs. This, he said, might be the greatest contribution of people of faith and faith-based organizations can offer.

Other panelists at the event were Joop Theunissen, Deputy Chief for Intergovernmental Policy and Review Branch in the Office of Intergovernmental Support and Coordination for Sustainable Development in the UN's Department for Economic and Social Affairs;  Sr. Sheila Kinsey, FCJM, Executive Co-Secretary of the Justice Peace and Integrity of Creation Commission of the Union of Superior Generals and International Union of Superior Generals; Rev. Protopresbyter Dr. Nicolas Kazarian, Director of the Department of Inter-Orthodox, Ecumenical and Interfaith Relations of the Greek Orthodox Archdiocese of America; Ms. Saphira Rameshfar, Representative to the UN of Baha’i International Community; Ms. Rana Yurtsever, Member of Advisory Boar of the Islamic Society of the Midwest; Ms. Teresa Blumenstein, New York Coordinator of the Justice Coalition of Religious; and Sr. Marvelous (Marvie) L. Misolas, MM, NGO Representative at the UN, Maryknoll Sisters of St. Dominic, Inc.

The 14 faith-based NGOs that jointly sponsored the events were Baha’i International Community, the Company of the Daughters of Charity of St. Vincent de Paul, the Congregation of the Sisters of St. Joseph of Peace, the Fondazione Proclade Inrternazionale-Onlus, the Greek Orthodox Archdiocesan Council, the Institute of the Blessed Virgin Mary Loreto Generalate, the International Presentation Association, the Islamic Society of Midwest, the Justice Coalition of Religious, the Maryknoll Office for Global Concerns, the Missionary Oblates of Mary Immaculate, the School Sisters of Notre Dame, the Sisters of Notre Dame de Namur and UNANIMA International. 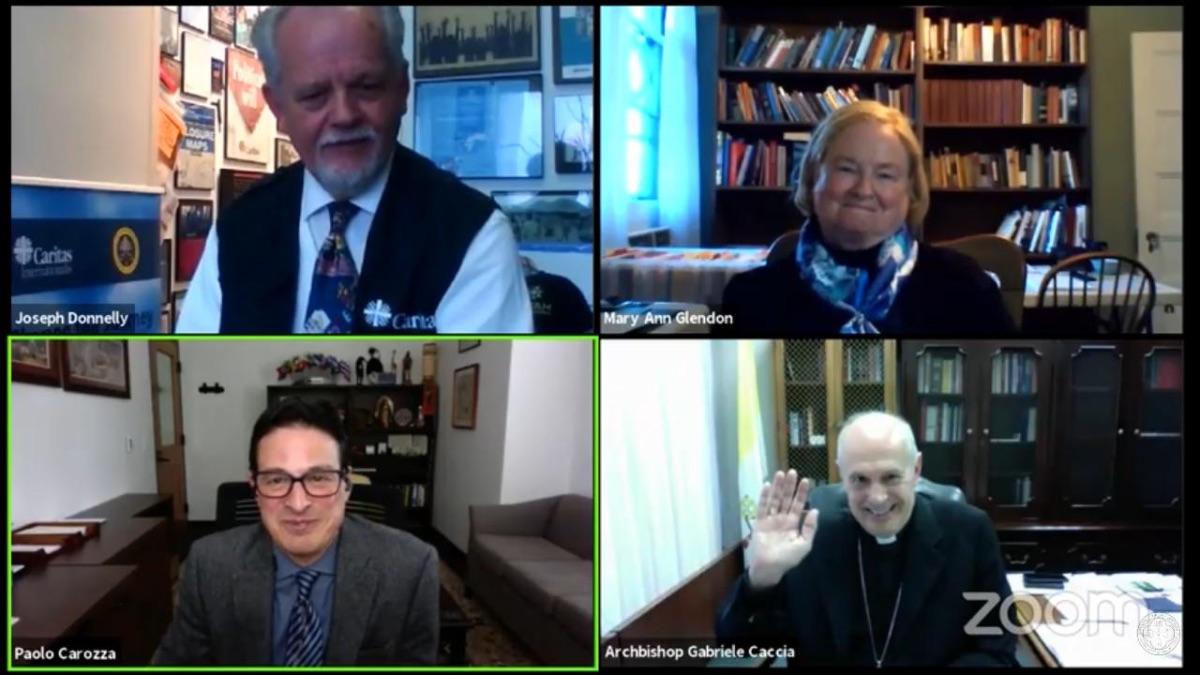 On October 22, Archbishop Caccia participated at a special event on Catholic perspectives about the UN in anticipation of the UN's 75th anniversary on October 24. Other panelists were Mr. Joseph Cornelius Donnelly, Delegate of Caritas Internationalis to the UN, top left; Ambassador Mary Ann Glendon, former Ambassador of the US to the Holy See and Professor of Law emerita at Harvard Law School, top right; and Dr. Paolo Carozza, Director of the Kellogg Institute for International Studies and Professor of Law and concurrent Professor of Political Science at the University of Notre Dame.

CHICAGO — On October 22, Archbishop Gabriele Caccia, Permanent Observer of the Holy See to the United Nations in New York, participated in a special virtual event entitled "The United Nations at 75: Catholic Perspectives."

In his remarks, Archbishop Caccia presented a brief history of the interaction of the Holy See at the United Nations both before and after it became a Permanent Observer State to the UN in 1964. He reviewed the visits and the principle messages of Popes Paul VI, John Paul II, Benedict XVI and Francis to the UN as a means to accentuate the approach of the Holy See and then summarized the Holy See's present and perennial priorities in its work in the various UN sites. He finished by sharing Pope Francis' recent remarks about the United Nations in his encyclical Fratelli Tutti.

The event featured two panelists besides Archbishop Caccia: Ambassador Mary Ann Glendon, former US ambassador to the Holy See, Learned Hand Professor of Law Emerita at Harvard Law School and Chairperson of the U.S. State Department’s Commission on Unalienable Rights; and Joseph Cornelius Donnelly, Delegate of Caritas Internationalis to the UN. It was moderated by Dr. Paolo Carozza (Notre Dame) and introduced by Fr. Matthew Malone, SJ, President and Editor in Chief of America Magazine.

The event was attended by about 240 people during the livestream and is now available to watch on demand.

After the remarks of the three panelists, there was about a half hour of questions to the panelists.

To read the text of Archbishop Caccia's intervention with the slides, please click here.

A Week of Birthdays 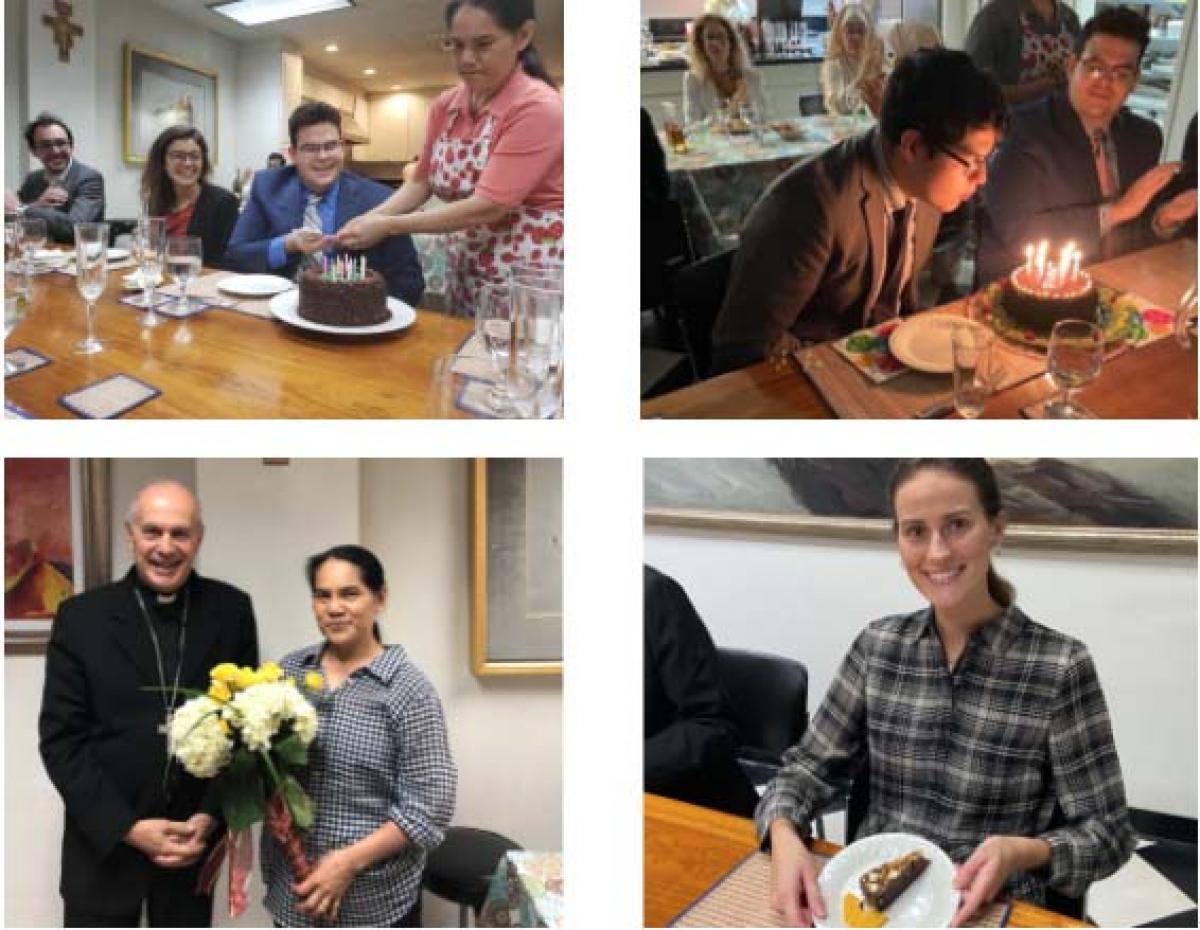