Our website is being upgraded and may show errors while we work. Please check back in a few hours.
November 13, 2020 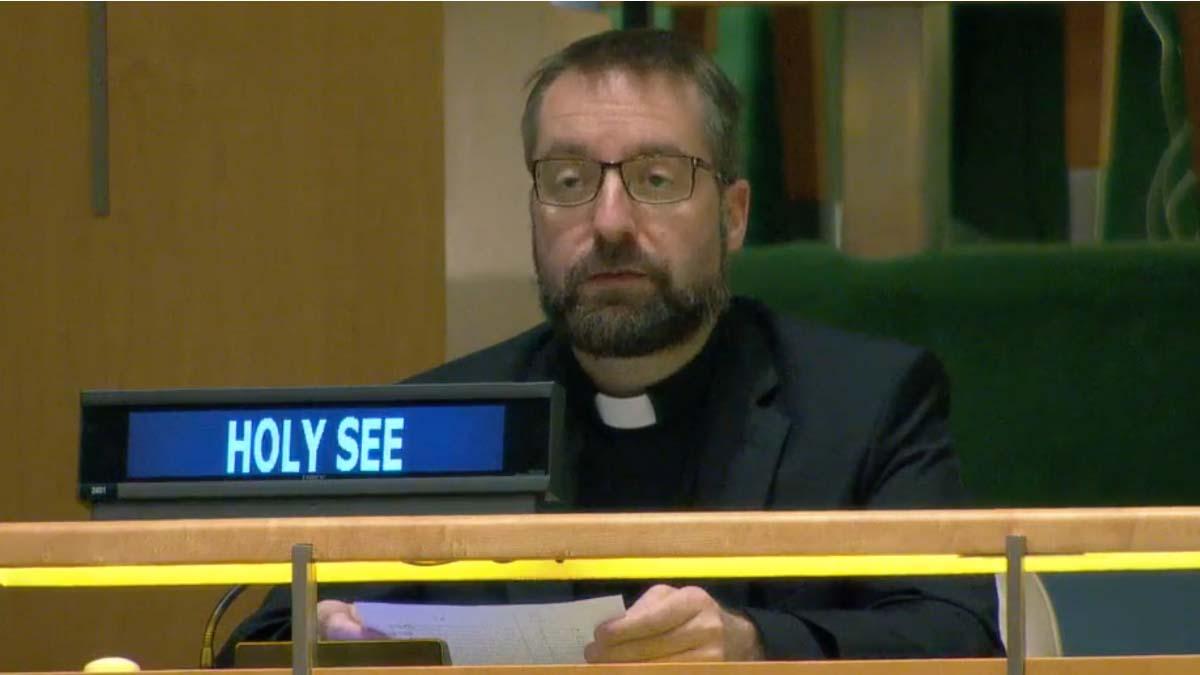 NEW YORK — On November 10, Archbishop Gabriele Caccia, Permanent Observer of the Holy See to the United Nations in New York, gave a statement before the Sixth Committee of the 75th Session of the United Nations General Assembly on Agenda Item 82, dedicated to "The Expulsion of Aliens"

In his statement, Archbishop Caccia said that refugees, asylum seekers, migrants, and victims of human trafficking and smuggling are some of the world's most vulnerable people.

He praised the International Law Commission for preparing a draft to guide the discussions of the Sixth Committee.

He underlined that those on the move, whether voluntarily or involuntarily, have no fewer fundamental human rights than lawful residents and highlighted some of those basic rights.

He praised the articles that affirmed that no one should be expelled to a State when the person's life or freedom would be endangered and expressed caution on the article that presumed that those subject to expulsion would be detained.

To read his statement, which was delivered by Msgr. Fredrik Hansen, please click here. 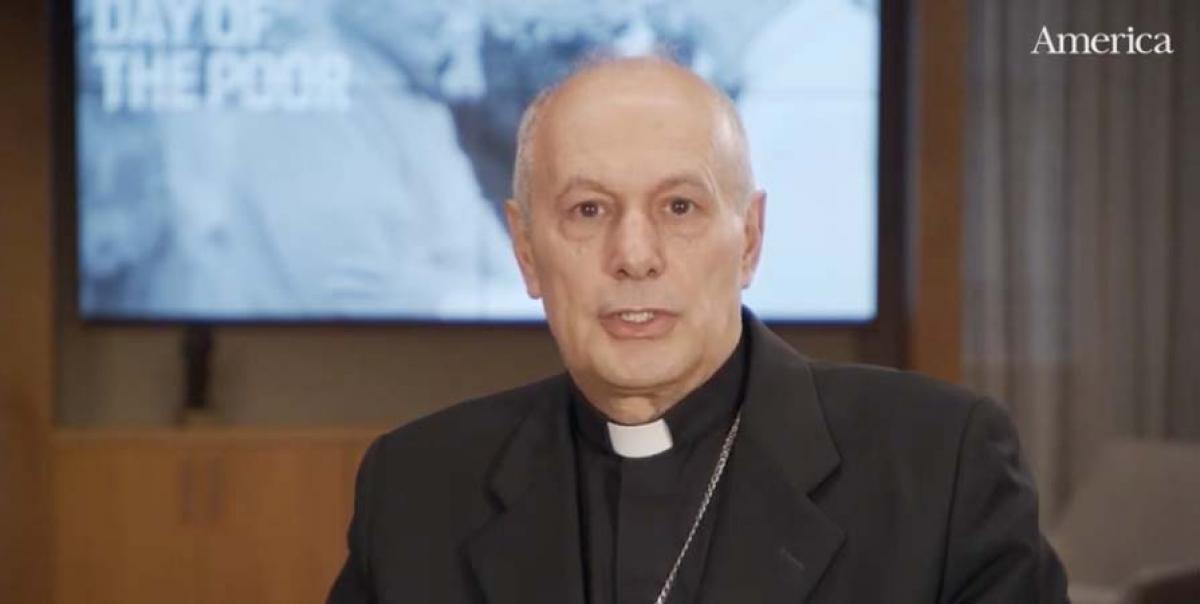 NEW YORK — On November 12, Archbishop Gabriele Caccia, Permanent Observer of the Holy See to the United Nations in New York, gave introductory remarks at a virtual event in anticipation of the fourth annual World Day of the Poor, which will be marked on Sunday, November 15.

There was also a panel moderated by Fr. Matthew F. Malone, S.J., president & editor in chief of America Media, involving a conversation about Pope Francis' letter for the 2020 World Day of the Poor.  The panelists were Nicholas D. Kristof of the The New York Times; Sister Donna Markham, OP, PhD, President and CEO of Catholic Charities USA; and  H.E. Maria-Francesca Spatolisano, the Assistant Secretary-General of the United Nations for Policy Coordination and Interagency Affairs.

Cardinal Joseph Tobin, Archbishop of Newark, concluded the event with a benediction.

The following were Archbishop Caccia's remarks:

“Stretch forth your hands to the poor.”

These words by Sirach are echoed by Pope Francis in the theme chosen for the Fourth World Day of the Poor, which will take place this Sunday, November 15.

Pope Francis established this commemoration in 2017 to spur Christian communities to imitate Jesus’ preferential love for the poor and to encourage people of all faiths and no faith to reject a culture of waste and embrace one of solidarity, fraternity and concrete care, stretching forth their hands to those in need.

All of us have seen, at least in photographs, Michelangelo’s famous Creation of Adam on the vault of the Sistine Chapel. God stretches forth his hand to impart to Adam the gift of life.

Stretching forth our hands begins not with our arms but with our eyes and our heart.

We must first look around and see the many people who are hurting.

Then our hearts must be moved with compassion for those who are suffering.

In his recent encyclical Fratelli Tutti, Pope Francis challenged Christians and all people of good will to relate to those in need like the Good Samaritan in Jesus’ famous parable: to cross the road and draw near, to allow ourselves to be inconvenienced, and to take personal responsibility for helping them get back on their feet.

Many, Pope Francis says, walk by the other side of the road, not noticing others’ pain, not being moved enough to act.

Pope Francis is calling us all, rather, to behave as brothers and sisters, literally Fratelli Tutti.

Not to keep our hands in our pockets.

Not to wash our hands of the situation of others.

But to extend both hands to pick others up.

During this pandemic, when normal human interactions like handshakes have been prudently restricted, we have become even more grateful for the outstretched hands of doctors, nurses, pharmacists, clergy, volunteers and neighbors.

Pope Francis is summoning all of us to imitate that concern, courage and generosity.

He’s asking us to lift up our hands in prayer.

And he is calling us to join our hands and work together.

Today’s event is to help us to do just that.

Thank you for your desire to join this worldwide mobilization of Good Samaritans.

May God bless you all.

Archbishop Paul Gallagher on the Diplomacy of the Holy See 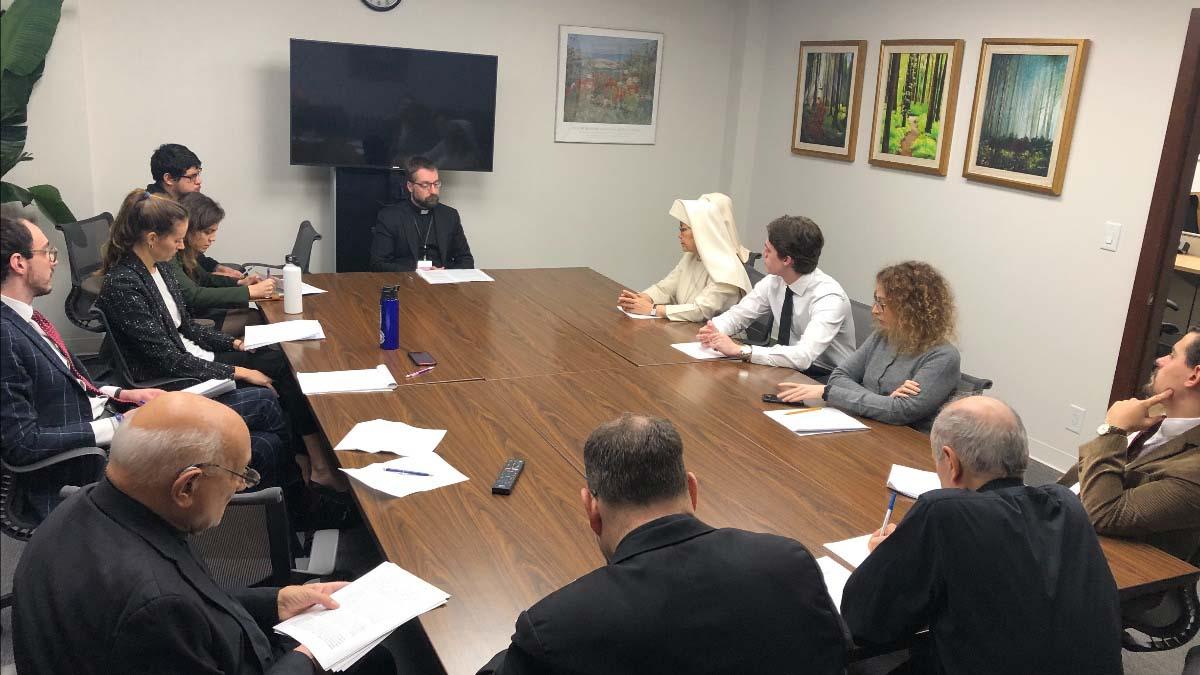 On Nov. 13, Archbishop Caccia (bottom right) led the staff of the Holy See in a study of Archbishop Paul Gallagher's recent virtual address to the Javier Pérez de Cuellar Diplomatic Academy in Peru on Holy See Diplomacy in celebration of the 40th Anniversary of the Accord between Peru and the Holy See. Archbishop Gallagher is the Holy See's Secretary for Relations with States (the equivalent of Foreign Minister).

NEW YORK — On November 13, Archbishop Gabriele Caccia led the staff and interns of the Permanent Observer Mission of the Holy See in an examination of Archbishop Paul Gallagher's recent virtual address to the Javier Pérez de Culler Diplomatic Academy of Peru in celebration of the 40th Anniversary of the Accord between Peru and the Holy See signed July 19, 1980.

"The diplomatic action of the Holy See is not satisfied only with the observation of events and of evaluating their importance, neither may it remain solely a sort of a critical voice of conscience, often 'outside the choir,'" Archbishop Gallagher said.. "It is called to act to facilitate coexistence between various nations, in order to promote that fraternity among nations."

"The diplomacy of the Holy See always has a definite ecclesial function as an instrument of communion," he stated," and is "also a special way through which the Pope can reach in a very concrete way the spiritual and material peripheries of humanity."

The ecclesial dimension of the Holy See's diplomatic work in nunciatures across the world, he said, is "the supreme law of the Church, namely the salvation of souls," while the external objective "is the orderly coexistence among peoples that, in the Christian vision, is the true and first prerequisite of peace.

To pursue peace, he said, does not mean only establishing a system of security and observance of commitments, but also "preventing the causes that could unleash a conflict as well as to remove those cultural, social, ethnic and religious situations that could reopen bloody wars just concluded."

He examined the just war doctrine with regard to ius ad bellum (the situations that justify recourse to the use of armed force) and ius in bello (the principles that guide ethical conduct in war), but developed the Church's growing understanding of ius contra bellum (the norms that actualize the instruments of the international order aimed at peacefully solving controversies and avoiding war) and ius post bellum (the criteria to build peace after a war concluded).

He then described Pope Francis' efforts to overcome the "indifference" that plagues peacemaking efforts across the globe.

"Indifference," he stated, "becomes like a protective shell that, day after day, helps us to go on, without asking too many questions, without creating too many problems for us, without getting too much involved, since many of these dramas do not concern us directly, and so we let history follow its course, without us and notwithstanding us. This is an attitude that … little by little, deprives us of our humanity, putting more than ever our conscience to sleep. In this perspective, peace becomes a problem of ‘the others,’ perhaps a problem of the most powerful, the wealthiest, the most learned, or even of those who have in their hands the destiny of peoples. In a nut shell, for the indifferent, peace remains simply a ‘utopia’ and those who talk too much about peace are just the 'deluded.'"

"I am more than ever convinced that it is necessary to break up these mechanisms of indifference, do away with the protective shell of our egoisms, thus moving from the theorems of a possible peace to concrete experiences of lived, even if suffered, peace," he said.

He finished by saying, "the diplomacy of the Holy See is a diplomacy on a journey, a journey long, complex and filled with difficulties, but, with the help of God, a journey indeed possible, aimed at conquering the many indifferences of our time and at building a future of peace for the whole of humanity." 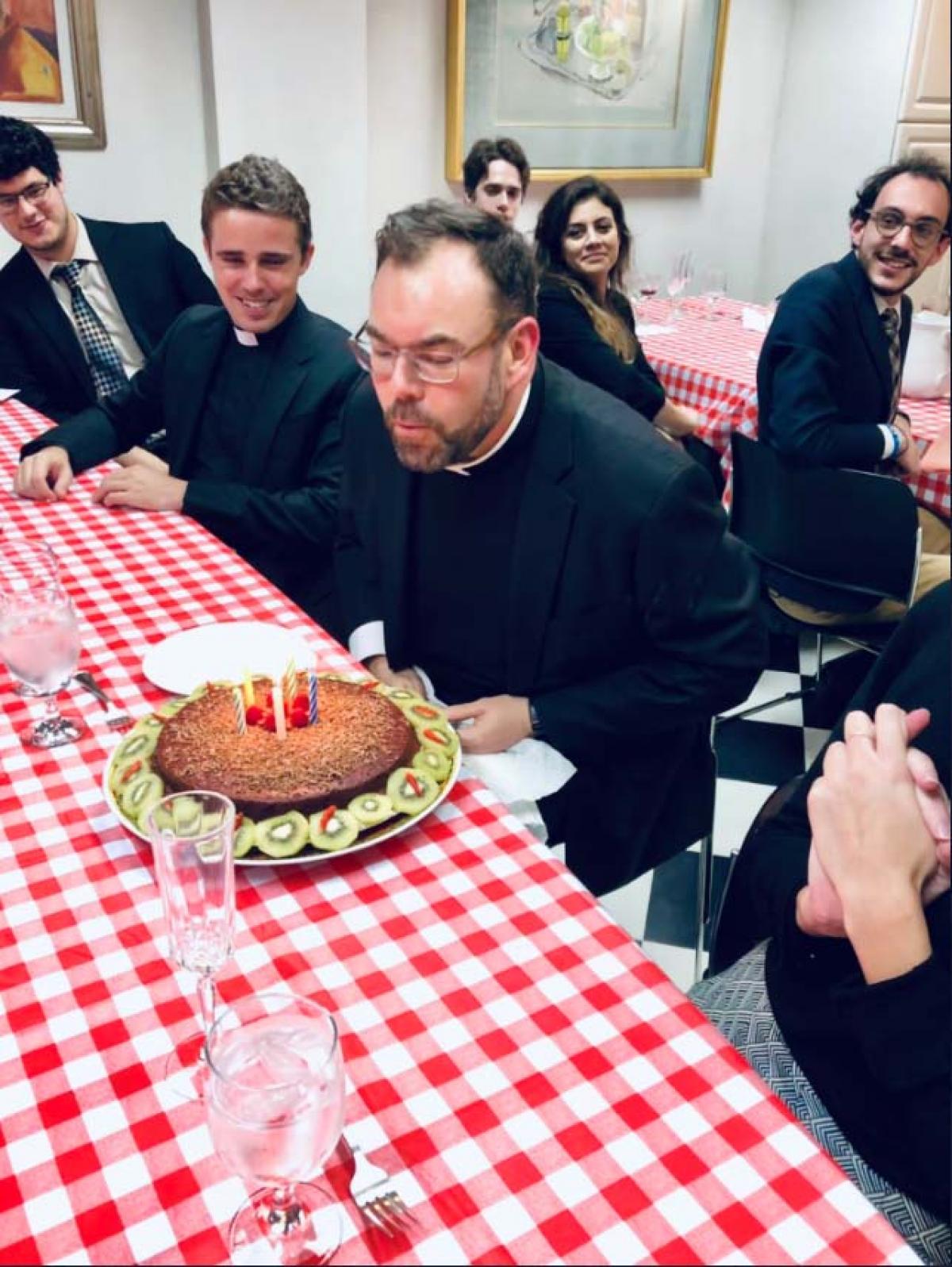 On Nov. 11, the Holy See Mission celebrated the birthday of Msgr. David Charters, First Secretary of the Holy See Mission. With the baking skills he honed as a hobby during the early days of the COVID-19 pandemic, he made his own birthday cake, a chili-chocolate concoction that everyone enjoyed.

The Laborers Are Worth Their Wage 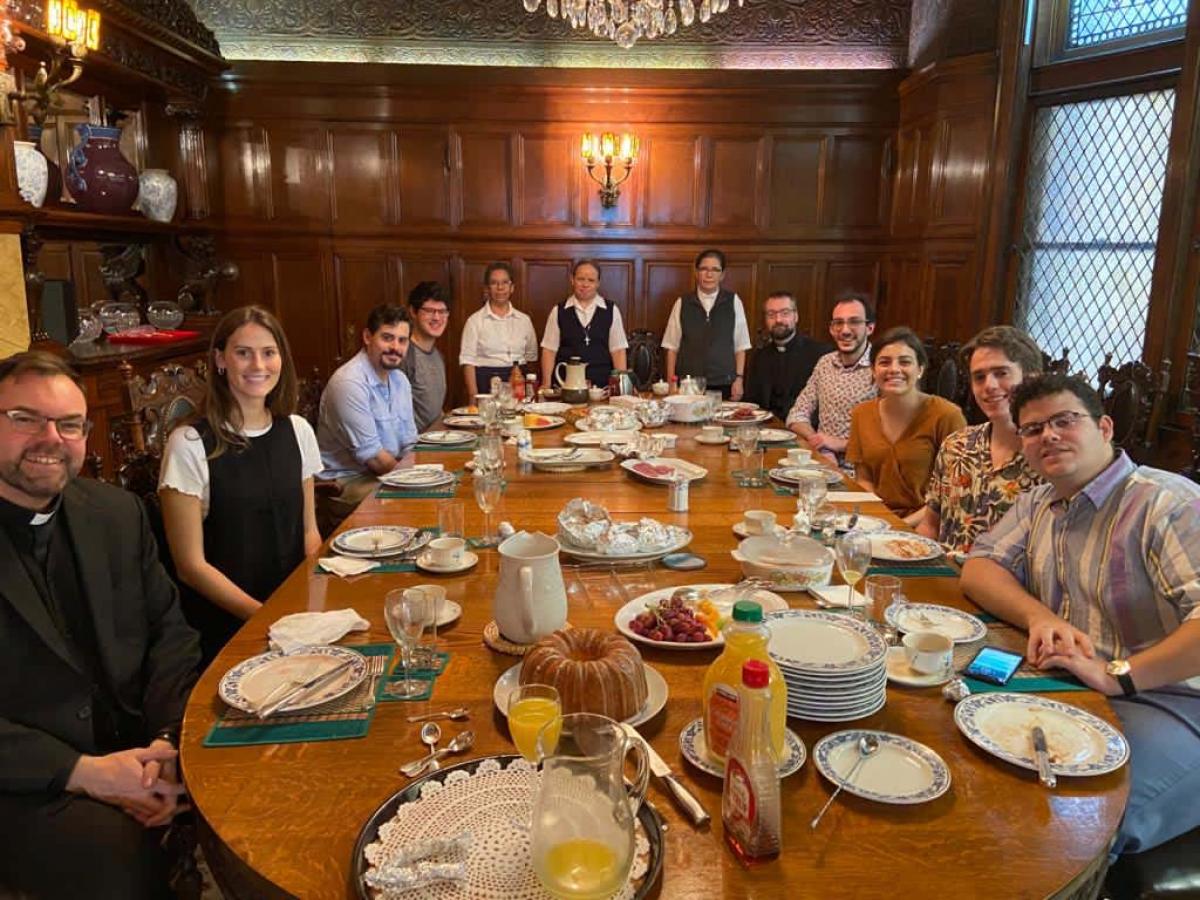 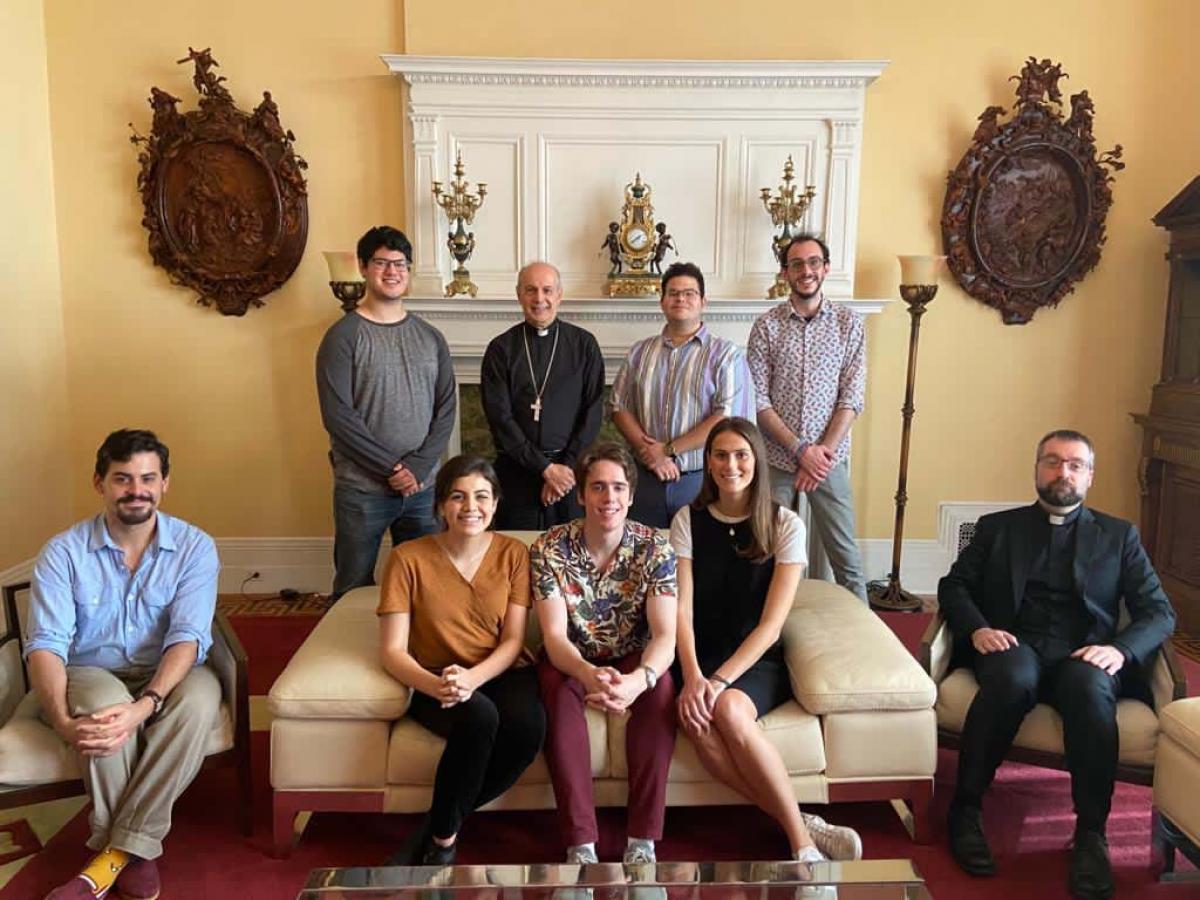