Our website is being upgraded and may show errors while we work. Please check back in a few hours.
September 24, 2021 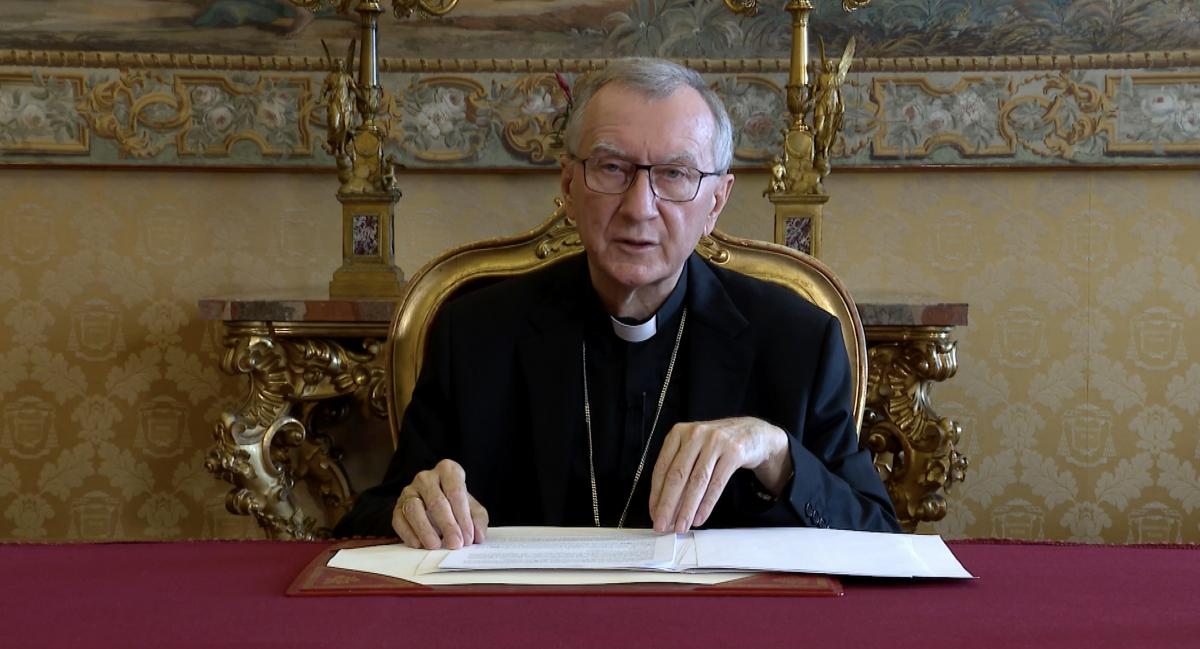 On September 25, His Eminence Cardinal Pietro Parolin, Secretary of State of the Holy See, delivered a statement during the Seventy-Sixth Session of the United Nations General Assembly on the theme "Building resilience through hope: to recover from COVID-19, rebuild sustainably, respond to the needs of the planet, respect the rights of people, and revitalize the United Nations." The meeting was held at the UN Headquarters in New York and Cardinal Parolin gave his remarks via pre-recorded message.

In his statement, he stressed the importance of maintaining hope as it "fosters resilience" and "inspires us to put in hard work even when we may not be able to see results achieved in our lifetime."

Resilience, he said, requires a robust sense of fraternity and solidarity as well as examination of the failures of economic systems and health care systems to respond adequately to the crisis of the pandemic.

He said that the fulfillment of the Sustainable Development Agenda by 2030 has “now because some a daunting challenge that tremendous efforts will be needed.”

Cardinal Parolin emphasized that commitments to a global ceasefire and non-proliferation of nuclear weapons are necessary for respecting the rights of people.

Human rights violations and disregard for the inherent dignity of the human person manifest, he said, a "crisis of human relationships,” that must be addressed, because it has “enormous practical consequences” for human rights.

Finally, he spoke about the need to revitalize the United Nations to sure that it "lives up to its true and commonly agreed upon aims, rather than being a tool of the powerful.” He highlighted in particular the need to safeguard the principal of consensus in negotiations and to avoid turning all UN organs into “bodies that focus on a limited number of disputed issues.”

To watch the video recording of his remarks, please click here. The statement can be read in full here. 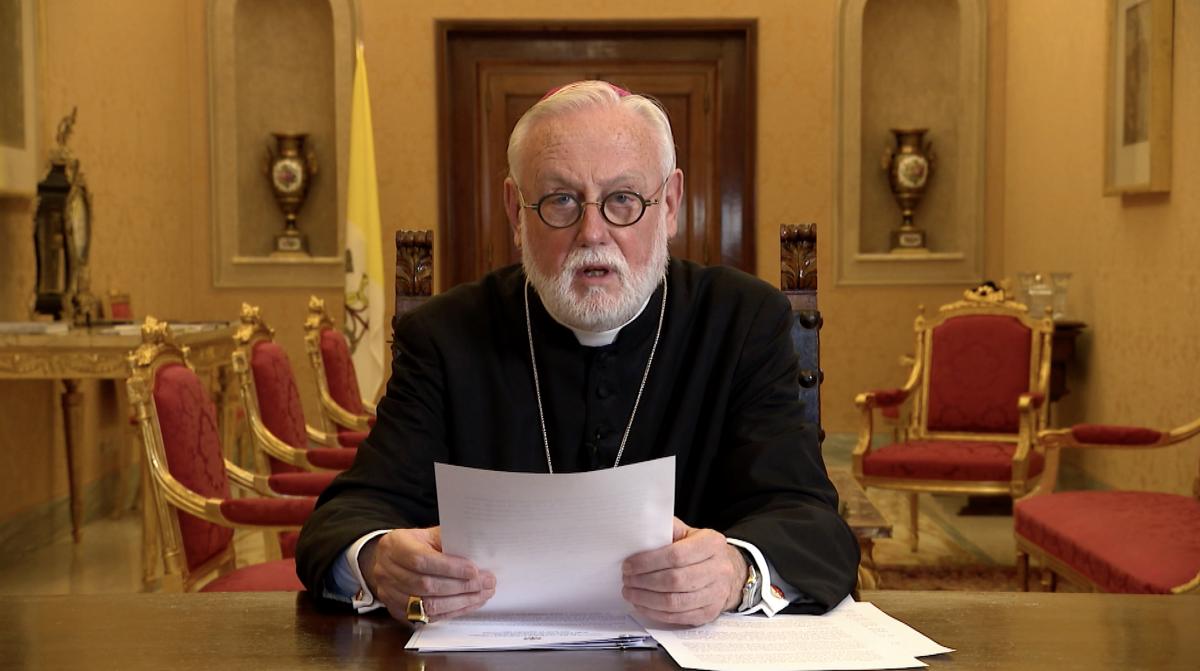 On September 24, H.E. Archbishop Paul Richard Gallagher, Secretary for Relations with States of the Holy See, delivered a statement during the United Nations Food Systems Summit, held at the UN Headquarters in New York. He delivered his remarks via pre-recorded video message.

Archbishop Gallagher welcomed the Secretary-General's launching of the Food Systems Summit initiative, reflecting that there is "a pressing need to intensify international action towards transforming food systems and combating food insecurity and malnutrition." He echoed Pope Francis' sentiment that hunger in the twenty-first century is "not only a tragedy for humanity, but also a real cause for shame."

He said that food is essential for a dignified life, and that "food for all" is a moral duty. In this regard, he added, we should strive to provide the poor and vulnerable with resources to support themselves and their families in the long-term.

He stressed the need to move away from a "throwaway culture" and toward a "culture of care" that considers the human dignity of all. He concluded by mentioning the many initiatives of the Catholic Church on the ground worldwide that strive to tackle hunger and food insecurity.

To watch the pre-recorded video of his remarks, please click here. The statement can be read in full here.

On September 22, H.E. Archbishop Paul Richard Gallagher, Secretary for Relations with States of the Holy See, delivered a pre-recorded video statement at the United Nations High-Level Meeting to commemorate the 20th anniversary of the Durban Declaration and Programme of Action. The meeting was on the theme of "reparations, racial injustice and equality for people of African descent."

In his statement, he said racism is "rooted in the erroneous and evil claim that one human being has less dignity than another," adding that this violates the foundational ethical summons to act toward "one another in a spirit of brotherhood."

Archbishop Gallagher hoped that the Permanent Forum for People of African Descent would contribute to efforts aimed at providing justice for victims of racism. He stressed that wider efforts to tackle racism and related intolerance must "never become a justification for States to violate the human rights of minorities or to censor minority opinions."

He called attention to the Durban Declaration's expressed concern about intolerance for, and violence against, religious groups, noting that intolerance on the basis of religion or belief  leads to hostility and atrocity crimes. In the most serious of situations, he said, "some religious minorities in certain regions even face extinction."

To view his pre-recorded video message, please click here. The statement can be read in full here. 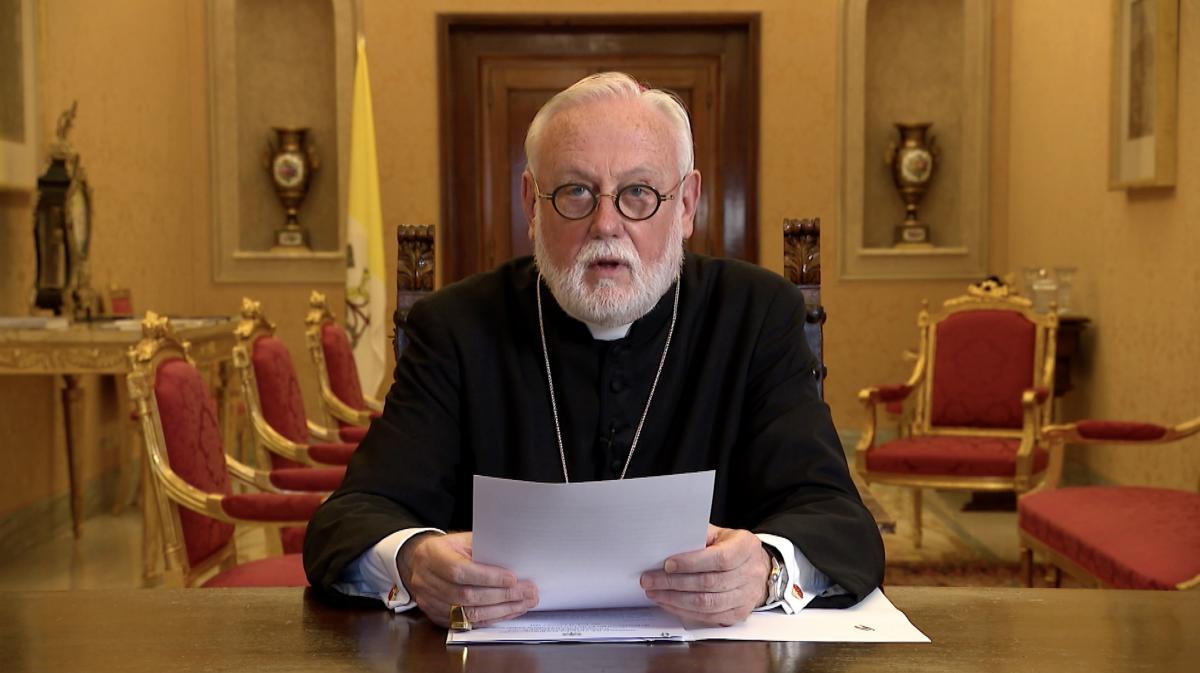 On September 24, H.E. Archbishop Paul Richard Gallagher, Secretary for Relations with States of the Holy See, delivered a statement at the High-Level Dialogue on Energy, held at the UN Headquarters in New York. He submitted his statement via pre-recorded video message.

In his intervention, he highlighted the necessity of having access to reliable and affordable energy if poverty and hunger are to be eliminated. He said reasonable energy pricing, ethical business practices, and subsidies for the poorest are essential.

He warned against the negative effects of energy production, adding that the poor and those in vulnerable situations are often the most impacted. He added that climate change can lead to forced migration and destroys livelihoods.

Finally, Archbishop Gallagher concluded by describing a transition to accessible and clean energy as "a duty that we owe to millions of our brothers and sisters around the world."

To view his video message, please click here. The statement can be read in full here. 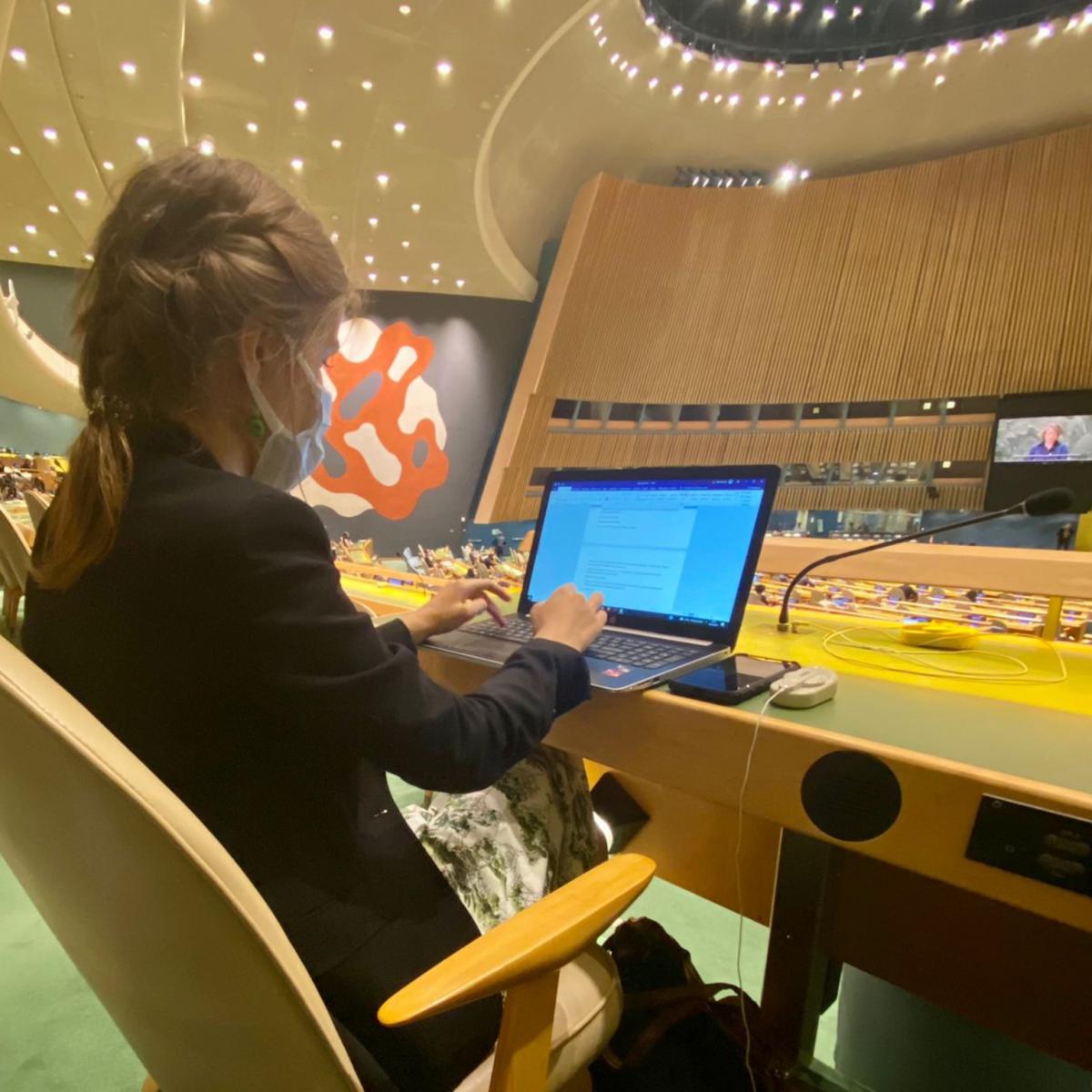 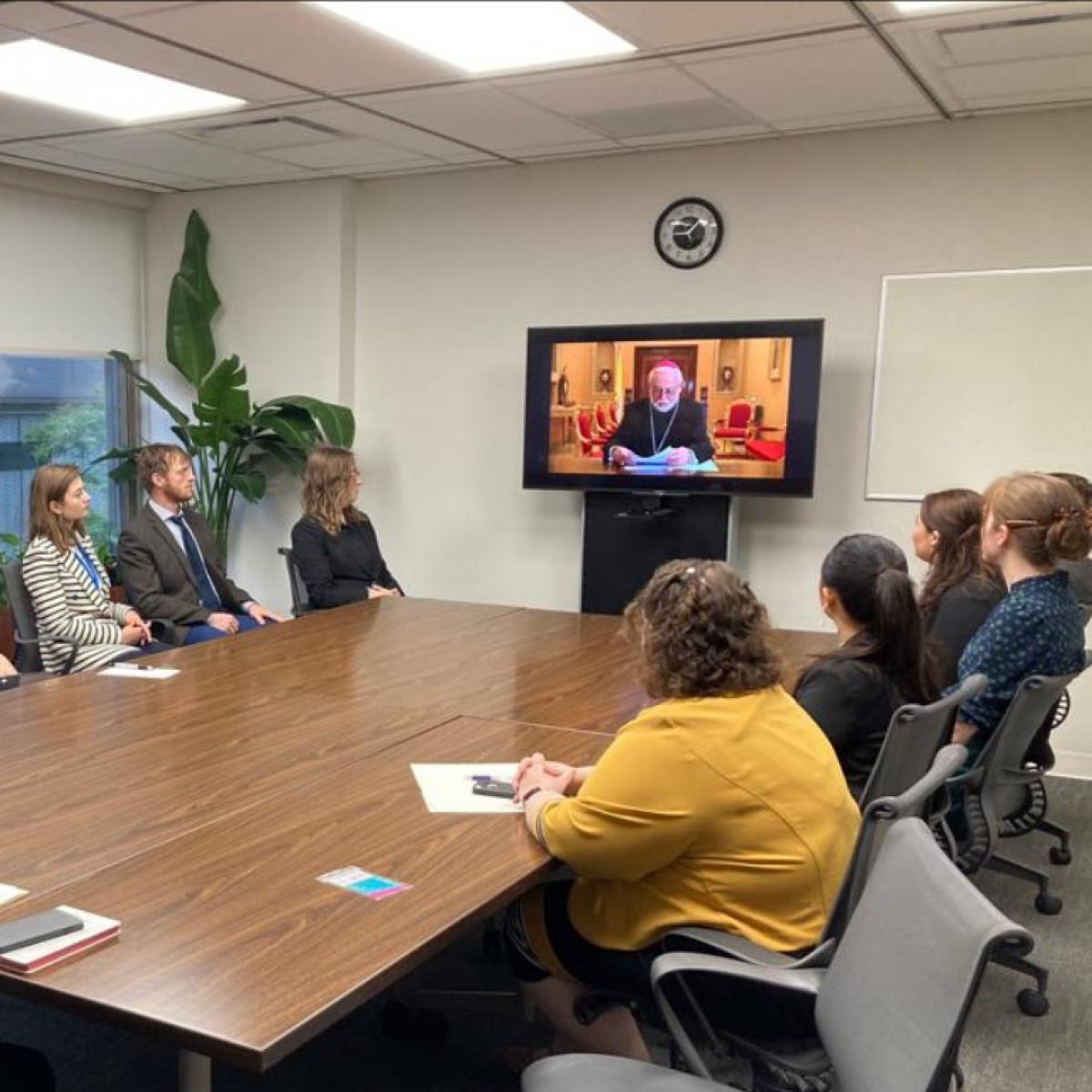 High-Level Week is one of the busiest times for the Mission's staff and interns. The Holy See delegation was always represented in the General Assembly Hall for the duration of High-Level week. Shown on top is Ewa Rejman covering the UN General Assembly debate. Shown below is a group of staff and interns gathered to watch Archbishop Paul Gallagher deliver the Holy See's statement on the 20th anniversary of the Durban Declaration. 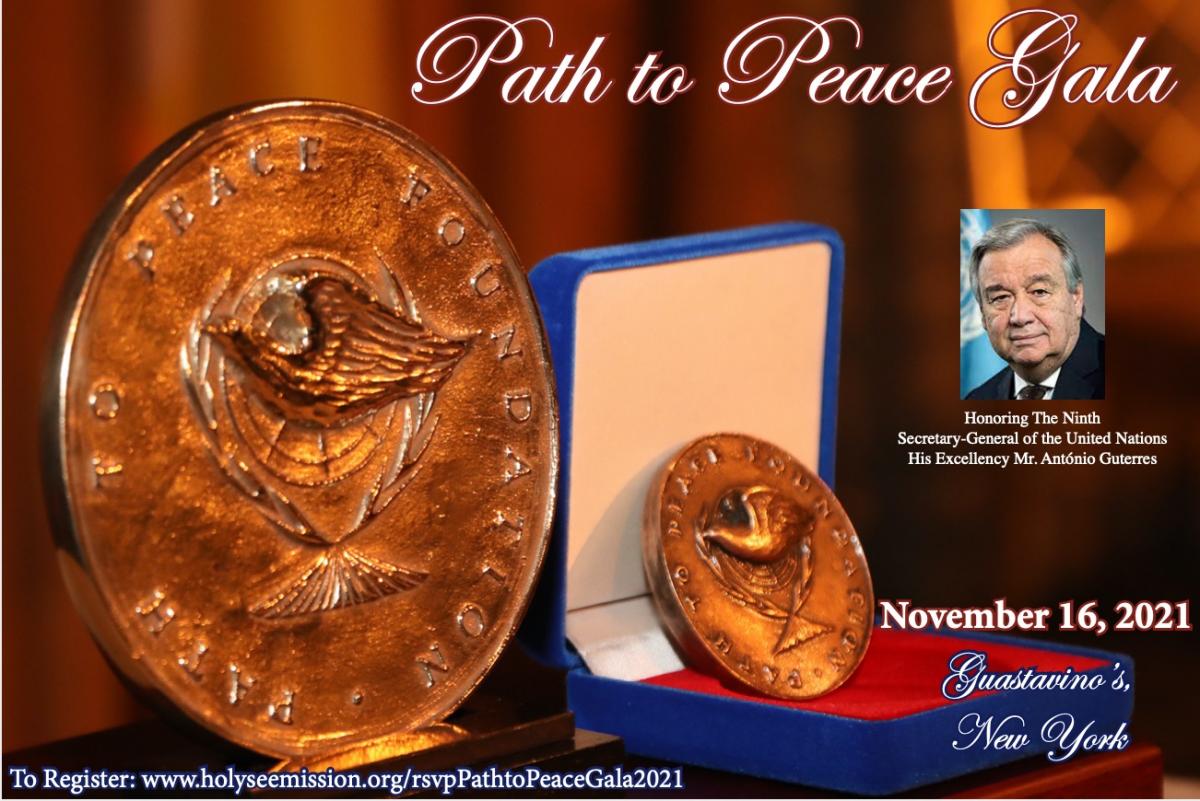 To REGISTER or for more information go to:
holyseemission.org/rsvp/PathtoPeaceGala2021