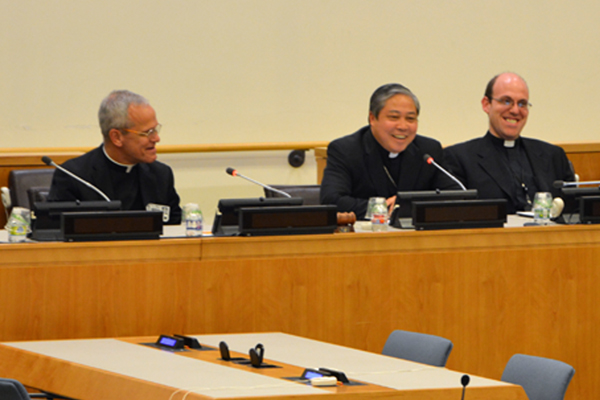 Papal Nuncio Explains the Church's Mission at the UN to Dunwoodie Seminarians
Archbishop Bernardito Auza, the Permanent Observer of the Holy See to the United Nations, addressed more than 100 seminarians from St. Joseph's Seminary of Yonkers, NY, during their Aug. 27 visit to the United Nations headquarters.
By Anna fataAttachéafata@holyseemission.org

The Pope is coming to the United States as a pastor, not a politician, according to his personal representative to the United Nations.

The Seminary, popularly known as “Dunwoodie,” had asked Archbishop Auza, in anticipation of Pope Francis’ Sept. 25 visit to the United Nations, to give them an overview of the history of the diplomacy of the Holy See, the Holy See’s work at the UN, and an introduction to what Pope Francis might say when he visits later this month.

“I am not a prophet, so I cannot tell you,” Archbishop Auza joked. “But one thing for sure, he comes as a pastor, as a father, as a religious and moral leader.”

He added, “Previous visits of the popes will tell you that Pope Francis’ address to the General Assembly will be framed according to the pillars and mission of the United Nations.”

Past papal addresses have underlined the importance of international peace and security, the defense of fundamental human rights and the rule of law, and the promotion of human rights, social and economic development, all core concepts of Catholic Social Doctrine that overlap, Archbishop Auza said, with the original aims of the UN Charter.

“Everybody hopes that he will underline the question of religious freedom and religious persecution in the Middle East,” Archbishop Auza added.

Since Pope Francis will be speaking to the UN immediately before the opening of the UN Summit on Development, the Filipino-born Apostolic Nuncio said he expects the Pope to share the Church’s thoughts on integral human development within the context of the 2030 Agenda for Sustainable Development.

He added that it is likely that the Holy Father will speak about many of the themes contained in his recent encyclical letter Laudato Si’: On Care for Our Common Home, the themes of which, he said, have resonated among many of the delegations to the UN.

Like his predecessors, Pope Francis is also likely to express his esteem for the work of the United Nations, Archbishop Auza added.

The rector of Dunwoodie spoke about how the Seminary’s field trip to the UN fits into the overall formation of priests for the third millennium.

“The history of modern popes have all attached great importance to the work of the UN for the promotion of justice and peace,” Msgr. Peter Vaccari said.

Msgr. Vaccari, who also teaches Church History at the Seminary, said the Holy See’s diplomatic presence at the UN is part of the Church’s service to the “family of nations,” an expression first used by Blessed Paul VI but echoed in every papal address to the UN since.

“The Church has a significant role within this ‘family of nations’ because so many fundamental principles we believe overlap with U.N. principles,” he said. “The Church has a role to promote the dignity of the human person, promote social justice, ensure people have access to freedom, food, water, and education.”

The Holy See, Archbishop Auza explained, is a Permanent Observer State to the United Nations, which means that it has access to most meetings, can give speeches and participate in negotiations, but cannot vote or present candidates to positions at the U.N. The Holy See has chosen to maintain this status over participating as a Member State because it better accords with the political neutrality necessary to underline its service to the “family of nations. “

Jose Arroyo, a seminarian in his third of four years studying theology, said that Archbishop Auza’s clarification was helpful to grasp the Holy See’s role.

“We are not there to gain power or bind ourselves to any political group,” he said. “Our position is to make sure that everyone is respected.”

Arroyo added that the experience of studying for the priesthood at Dunwoodie was a good preparation to grasp the international flavor of the UN.

“We have our own little United Nations here,” Arroyo said, referring to the fact that seminarians at St. Joseph’s Seminary hail from dozens of different countries of origin.

Visiting the place where representatives from the nations of the world assemble, Arroyo added, was a good preparation for those who will be sent to proclaim the Gospel to all nations.

“It is important to realize the Church is made up of many members of different backgrounds and cultures, and I need to be more informed because we have to focus on the reality of the people we are going to serve.”

Some seminarians joked that Archbishop Auza might have been addressing future staff members or even his own future successor, since the group of priests-to-be left the UN with their interest kindled in the Holy See’s involvement there.

“We talked about our visit on the way back to the Seminary on bus and everyone was amazed,” Seminarian Ricardo Rivera stated. “Even the next day at breakfast, everyone was still talking about the United Nations. If they give me the opportunity to work there, I would.” 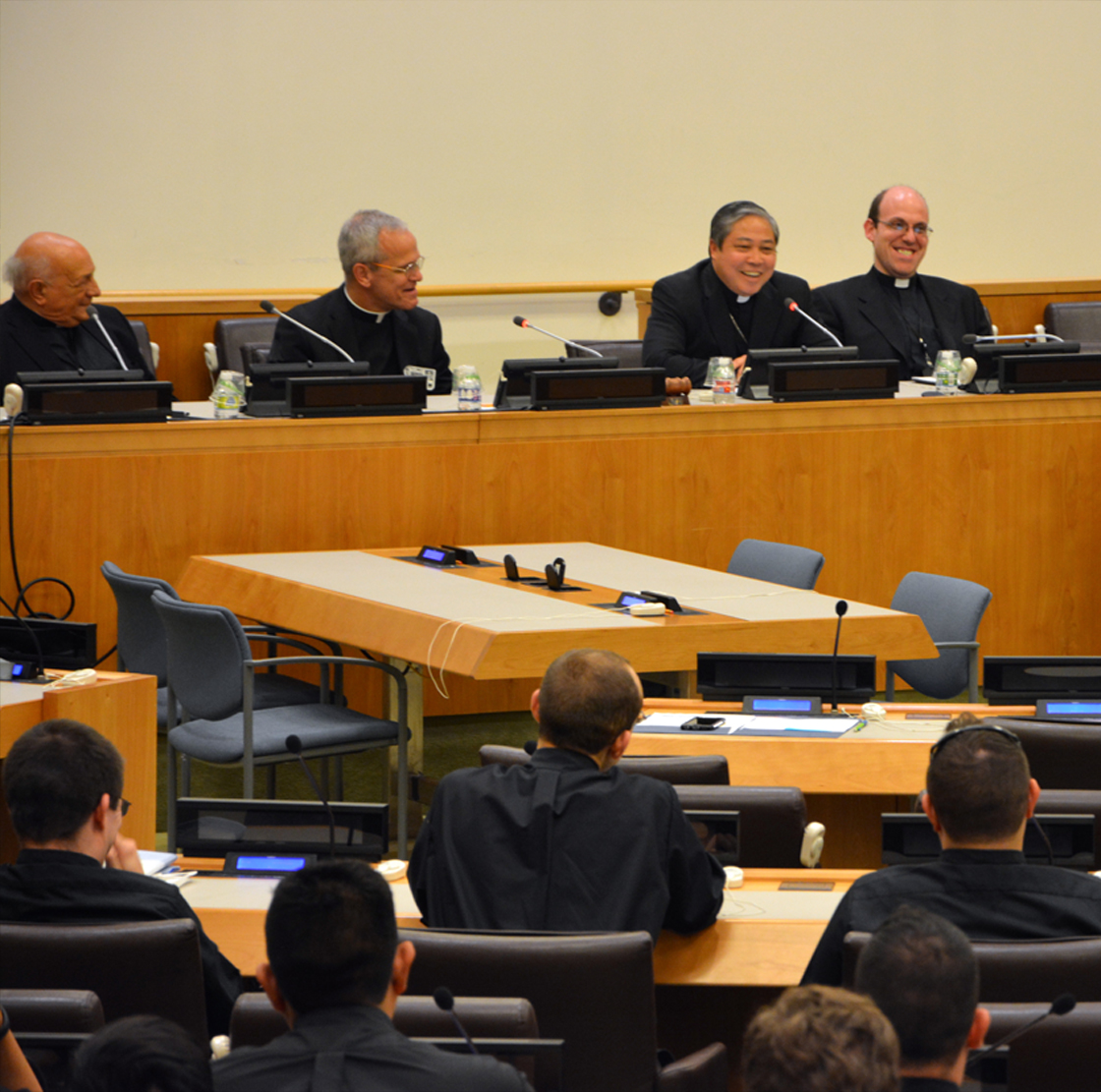