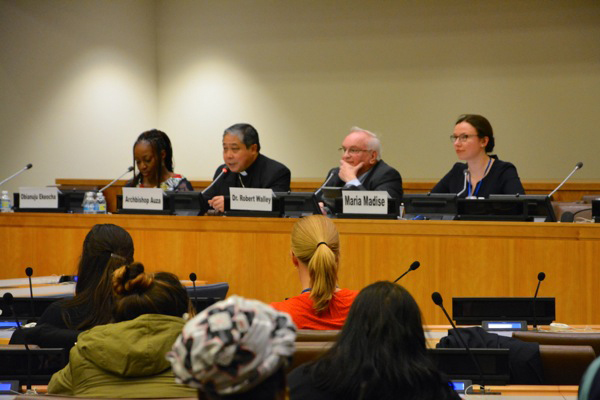 Experts focus on genuine health care for African mothers
On March 17, the Permanent Mission of the Holy See to the United Nations in New York hosted a panel discussion entitled Best Practices for Maternal Healthcare in Africa.

On March 17, the Permanent Mission of the Holy See to the United Nations in New York hosted a panel discussion entitled Best Practices for Maternal Healthcare in Africa to inform the group of advocates and diplomats present at the 60th Commission on the Status of Women of the maternal healthcare needs on the ground in Africa.

Experts summoned the international community to broaden maternal healthcare services for African women, and to incorporate local cultures and deeper respect for life at UN event.

Archbishop Bernardito Auza, Permanent Observer of the Holy See to the UN, moderated the panel and said one of the most important ways the international community can empower women is through genuine support of women who are mothers, which in turn strengthens the family and the whole of society.

“We all need to recognize the greater burdens placed on women in motherhood and familial life and to rise up in solidarity to help women meet those challenges,” he said, “Even though parenthood belongs to men as much as to women, parenthood obviously taxes much more of the energies of a woman’s body and soul.”

The experts present said that one of the most common forms of discrimination against women in African countries is the relative lack of basic healthcare, most notably concerning healthy pregnancies and deliveries.

Dr. Robert Walley, Executive Director of MaterCare International, an organization of obstetricians, gynecologists, midwives and general practitioners dedicated to reducing the high rates of maternal mortality and morbidity throughout in Ghana, Sierra Leone and Rwanda, said the idea to start MaterCare came from seeing the disparities in healthcare for women in Africa compared to the West while he was providing obstetric treatment in Nigeria in 1982.

“Working at a hospital in Canada, I’ve never had a mother died under my care,” he said. “When I went to Nigeria I could not believe what I was seeing. We had four maternal deaths the first weekend I was there.”

In Africa, health issues rarely seen by Western doctors are common place, such as Obstetric Fistula, which is damage to the bladder and rectum caused by obstructed labor which leads to rupture of the uterus, death of the infant, incontinence of urine and feces, and consequent stigmatization of the woman he said.

“The solution to avoid damage is a cesarean section, but women in Africa lack access,” he said. He founded MaterCare to respond to this need by building a hospital and using motorbike ambulances to transport women there.

Because 80 percent of deliveries occur in remote villages, MaterCare collaborates with the local community to provide traditional birth attendants and tribe leaders with the knowledge necessary to ensure access to treatment while respecting African culture, he said. One of their practices includes using a medical chart with visual illustrations of health issues to for midwives to communicate needs with hospital workers.

“A child is a gift and the mother has a right to be respected in every possible way,” he said. “Her moral, social and cultural values have to be accepted.”

Obianuju Ekeocha, founder of Culture of Life Africa, an organization that focuses on the promotion of life and of respect for motherhood throughout culture via education, said the pressure African countries receive from the international community to legalize abortion in the continent is culturally insensitive and reduces the aid to necessary maternal healthcare.

“Africa is made of 54 countries with many cultures, tribes and creeds, but our common thread is our understanding that human life is precious from conception and motherhood should be celebrated,” she said.

Ekeocha, who lost her cousin to obstructed labor, said although 96 percent of all maternal deaths in Africa are not related to abortion, the international community, including developed countries that provide aid to Africa, places legalization of abortion as a top recommendation to reduce maternal mortality.

“My tribe in Nigeria doesn’t even have a way to explain abortion in our language because it is so against our culture,” she said. “This is ideological neo-colonization.”

Women in Africa need access to healthcare that addresses the leading causes of maternal mortality including bleeding, infection, obstructed labor, and HIV/AIDS, she said.

Maria Madise, the International Director of the Society for the Protection of Unborn Children in London, said international emphasis on funding abortion is an obstacle for maternal healthcare.

She said maternal mortality rates declined in Britain in the 1930s due to antibiotics, access to blood transfusions, and better healthcare training and organization, far before widespread access to abortion and contraception.

“Childbirth is rendered safe by entirely ethical solutions,” she said. “It is an absurd conclusion to say the legalization of abortion is necessary to save women’s lives.”

She also said of Western countries, Poland, Malta and Ireland have the strictest abortion laws, but also the lowest maternal mortality rates.

“Safe motherhood has become entangled with a reproductive rights agenda that promotes contraception and promotes,” she said, “Maternal Life International lost resources that should have gone to obstetrical care to this agenda.”