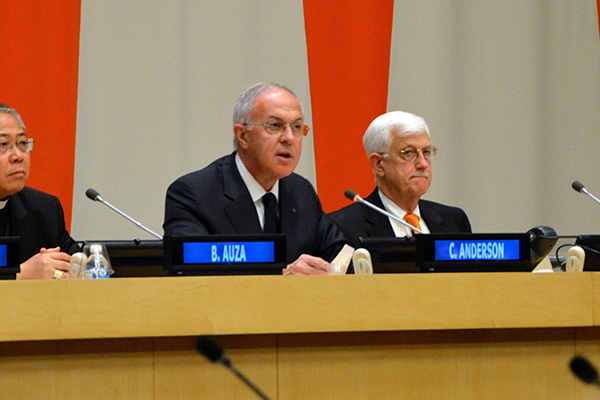 Remarks by Carl Anderson
As delivered during the event organized by the Permanent Observer Mission of the Holy See to the UN, together with co-sponsors CitizensGo, MasLibres and In Defense of Christians on April 28, 2016 at the UN Headquarters in New York
By Carl AndersonSupreme Knight of the Knights of Columbus

“Religious minorities have an indisputable right to live in their homeland.  Their disappearance would diminish us all.”

Defending Religious Freedom and Other Human Rights: Stopping Mass Atrocities against Christians and Other Believers

A conference held at the United Nations

The world’s greatest humanitarian crisis since World War II is unfolding in the Middle East.  Hundreds of thousands of people in Syria and Iraq have lost their lives, entire communities have been displaced or wiped out, while neighboring communities and cultures strain to accept millions of people fleeing years of war and terrorism.  We face the very real prospect of the extinction of many of the communities indigenous to the region.

This crisis implores all people of good will to unite in a solidarity of conscience to build a worldwide effort to save the historic, indigenous minority communities of the region regardless of their race, ethnicity or religion.

The Knights of Columbus is committed to this great cause. Since 2014, we have raised more than $10.5 million for relief, assisting Christians and other internally displaced persons and refugees in Iraq, Syria, Jordan, and Lebanon. We have partnered with dioceses and religious agencies working in the region to provide general relief, food, clothing, shelter, education, and medical care.

In addition to charitable work, in the United States we advocated for designations of genocide by the Congress and the Department of State.  In support of these declarations, we conducted an extensive a public awareness campaign; and at the request of State Department officials, produced an extensive report on the genocide against Christians, credited by both members of Congress and officials at the State Department with being instrumental in their determinations that genocide is being committed against Christians and other religious minorities in the region.

Our nearly 300-page report – submitted to the State Department on March 9 and subsequently to members of Congress – both documented the atrocities and laid out the legal analysis supporting the conclusion that genocide is occurring.  It showed that terms like “religious cleansing” or “crimes against humanity” are inadequate to describe both the magnitude of the tragedy and the clear intent of the perpetrators.

The State Department’s declaration of genocide on March 17 marked only the second time that such a determination has been made by the U.S. government while the crime is ongoing.

The Convention on the Prevention and Punishment of the Crime of Genocide – and the U.S. law based on it – require the commission of intentional acts to destroy a group “in whole or in part.”  The “in part” destruction of the group, or its mass deportation is sufficient to a finding of genocide.[1] Mass deportations too are consistent with such a finding.[2]

ISIS and the victims we interviewed agree on one thing. Many of those targeted were targeted because of their Christian faith.

The terror group’s magazine, Dabiq, is named for the place where its leadership believes it will win a decisive battle against the army of Rome[3] destroying the “Crusader army,” an unmistakable Christian reference. Last year, it published a picture of Pope Francis describing him as “the crusader pope.”[4]

The magazine has stated:

We will conquer your Rome, break your crosses, and enslave your women … If we do not reach that time, then our children and grandchildren will reach it, and they will sell your sons as slaves at the slave market.[5]

That statement is one of many.  A recent ISIS video from Libya states: “‘Fight and kill them, from their Great Priest … to the most pathetic one,’” adding, “Terrorize the Jews and burn the slaves of the Cross.”[6]

The predecessors of ISIS--the Islamic State in Iraq and Al Qaeda in Iraq—also targeted Christians. ISIS’ leader Abu Omar Al-Baghdadi stated nearly a decade ago that Christians no longer qualify for tolerance under Islamic law.[7] Under his leadership in 2010 Our Lady of Salvation Church in Baghdad was attacked, killing dozens of Catholic Christians.  Among the claims made by the gunmen was that: “All of the Christians were infidels; [and] it is permitted to kill them.”[8]  Since that time, such attacks have increased in scale and intensity.

Our recent fact-finding mission to Iraq found evidence of widespread rape, kidnapping, forced conversions, slavery, murder, property confiscation and forced expulsion.  Many of the incidents had not been previously reported. But based on what we learned, it is our impression that what we know today is likely to be only the tip of the iceberg.  A concerted, sustained effort now needs to be undertaken to document the extent of this tragedy.

Those we interviewed showed great strength. Some showed great heroism. For example, Kahlia, a woman in her fifties, was held hostage along with 47 others in Iraq. During her 15 days in captivity, she endured demands to convert to Islam with a gun to her head and a sword to her neck. She physically resisted ISIS militants who attempted to rape hostage girls and tried to take a nine-year-old as a bride, only to endure beatings for her efforts.

Although 14 men in the group were coerced into saying they would convert to Islam, Kahlia did not.  She told her captors that since Jesus died for her, she could die for him. Ultimately, she was not killed, but was left in the desert to walk to Erbil. Refugees told us that her heroic resistance “had saved many people.”

We know that ISIS has killed thousands of Christians in Iraq, Syria, and Libya. Mass graves have been reported in Syria, and the desert between Mosul and Erbil was littered with bodies as Christians there fled too quickly to bury neighbors and family members.

Churchmen from the region, including Syriac Catholic Patriarch Younan, and archbishops from Aleppo, Erbil, and Mosul have all called what is happening to their people genocide.

Adding to this witness are world leaders from Pope Francis to Angela Merkel, and the governments of Iraq, the Kurdish Regional Government, the European Parliament and the United States.

ISIS consistently violates the four main goals found in the Preamble of the United Nations Charter to: (1) save succeeding generations from the scourge of war; (2) protect and reaffirm faith in fundamental human rights; (3) promote justice and adherence to international law; and (4) foster development and freedom. The scourge of what is happening in Iraq and Syria is a frontal assault on fundamental human rights, freedom and development throughout the region.

Genocide has special meaning for Christians in the Middle East. Almost a century ago, Raphael Lemkin formulated the concept he would later call genocide to address the killing of Christians in the region during and after World War I.

Today the stakes are even higher. The number of Christians in Iraq has plummeted from more than 1.5 million to as few as 200,000. In Syria, the Christian community has been decimated by two thirds, from 1.5 million to 500,000. The indigenous Christian people of the region are a vulnerable and fragile community.  Today they are at risk of disappearing entirely. These people are among the longest-standing ethnic and religious communities, not only in the region, but in the world.  Religious minorities have an indisputable right to live in their homeland.  Their disappearance would diminish us all.

The United Nations must act to ensure that these ancient and vulnerable indigenous groups do not face extinction.

The Responsibility to Protect was unanimously adopted by the General Assembly in 2005. It includes the pledge of all nations and the United Nations to protect populations from genocide.  The document’s paragraphs 138 – 140 articulate the responsibility of national governments – supported by the international community and the UN – to stop such crimes. A decade later, we must ensure that this unanimous commitment of the world has a meaning through concrete action.

Under the auspices of the United Nations, concrete steps can be taken to make this commitment a reality.

First, the Security Council should refer key perpetrators of genocide for prosecution by the International Criminal Court. Although substantial evidence of genocide exists, further action should be taken to develop additional documentation before physical evidence is lost.

Second, the UN High Commissioner for Refugees should make provisions for locating and providing relief to communities – such as Yezidis and Christians – that have been targeted for genocide. Many of these refugees fear going into official UN refugee camps. As a result far too many of these genocide survivors are being overlooked, and those who wish to acquire official refugee status or immigrate find it difficult and often nearly impossible to do so.[9]  Some improvements have been made, but much more needs to be done.

Third, together with governments involved in assistance or negotiations in the region, the UN should advocate for full and equal rights for religious minorities in the region.  A necessary first step to prevent genocide is to overcome the social and legal inequality that is its breeding ground.

Religious hatred, discrimination and second-class citizenship too often constitute a way of life in the region—and it is a way of life that is an antecedent to genocide.  We cannot accept one standard for human rights in the region and another standard for the rest of the world. The guarantees in the Universal Declaration of Human Rights regarding equality under the law and freedom of speech and religion must become a reality for all citizens of Iraq, Syria and Libya—the security of the region and perhaps even the world depends upon it.  We must be realistic regarding the barriers to human rights in the region, but at the same time we must “keep our eyes on the prize” toward which we are striving: equality for all before the law.

Fourth, we must prepare now for the consequences of the liberation of ISIS controlled area, including Mosul and the Nineveh region, as well as regions in Syria.  We may well see another humanitarian crisis as civilians flee the fighting. Additionally, as these areas are liberated, victims of attempted genocide, who fled or were forcibly evicted, are entitled to international support for their claims to property or to compensation for property.

If displaced persons want to return home, they should be supported – legally and actually – in that choice. For those who have suffered too much to return to their homes—refugees who have decided to remain in the places to which they fled, they should be allowed to do so.  The support of the international community will be critical on both counts.

The world stands at a crossroads. The rich tapestry of religious pluralism in the region must be preserved now or it will be lost forever. If Christianity disappears in this region, so does the opportunity for pluralism there; and the likelihood of majoritarian theocracy, or something worse, is increased. The threats from such an outcome to peace, stability and security – in the region and beyond – are substantial.

We have a unique opportunity to change things for the better.  Never before has the world’s attention been so focused on the suffering of these minorities. Never has their plight been so high on the agenda of the world’s governments, the vast majority of the world’s Muslims, and all people of good will.

The United Nations can play a vital role in securing a future in the region that helps to preserve pluralism by protecting the victims and refugees, by ensuring the survival in the region of these ancient indigenous and religious communities, by punishing the perpetrators and by supporting the establishment of internationally agreed upon standards of justice, equality, rule of law and religious freedom.

[1] Hannibal Travis, “On the Original Understanding of the Crime of Genocide,” Genocide Studies and