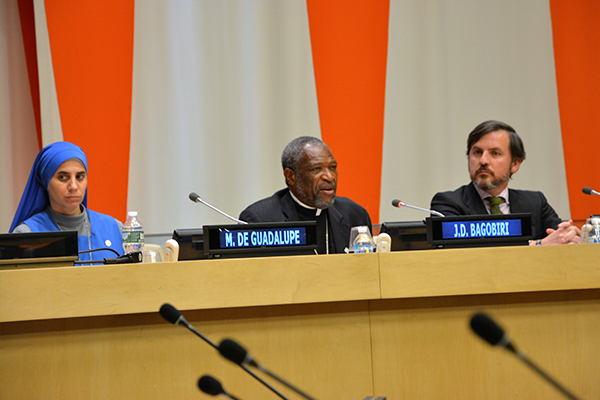 Defending religious freedom and other human rights:
Stopping mass atrocities against Christians and other believers

My aim in this presentation is to draw the attention of this assembly and through it, the International Community, to the endangered situation of Christians in Northern
Nigeria as a result of the impact of persistent violence and other various heinous forms of persecution meted to them by Boko Haram and nomadic Fulani herdsmen - both of which are organizations of the deadliest type bent on establishing caliphate governance in Nigeria.

The ideas in this presentation are not just personal. They are the fruits of a scientific study carried out by a team of experts in collaboration with a wide spectrum of
Nigerians, sponsored by the Open Door Research Department, with the strong backing of the Nigeria Church under the auspices of the Christian Association of Nigeria (C.A.N).

Nigeria has a vibrant estimated population of about 170 million, and it is the seventhmost populous country in the world. It has a balanced Population of Christians and
Muslims. Kaduna State, where I come from, is a microcosm of Nigeria with a balanced population of Muslims and Christians. It is a pluralistic Society with over 300 ethnic
Nationalities living side by side one another. It practices democracy and has had 6 democratically elected Presidents between 1960-2016. The Country has also been
governed by 8 military dictators.

Boko Haram and the Fulani Herdsmen are terrorist organizations, both of which selfdescribe as Muslim, and kill, maim, destroy properties through bombings, conduct
guerrilla attacks and practice all forms of discrimination and marginalization against non-Muslims and those Muslims who oppose them.

The statistics of persecution and violence against Christians world-wide have become unprecedented in recent times. Christians in the Middle East; Western, Central and
Southern Asia; North and East Africa have had their own share. But 2014 saw the worst of violence and persecution of Christians in Northern Nigeria. An online Christian
Magazine, Prophecy NewsWatch, estimated that out of every 100 Christians killed around the world in 2014, 64 of them were Nigerians, mainly from Northern Nigeria. In
this same year, Amnesty International submitted that Boko Haram was the worst and deadliest terror group in the entire world.

We are afraid that if serious measures are not taken to protect the gains of evangelization in Northern Nigeria, Nigerian Christians could suffer the same fate of
Churches in the Middle East and North Africa.

Pope Francis and Patriarch Kirill, in their landmark joint statement recently signed in Havana, decried that formerly flourishing churches have been getting literally driven to
extinction, with the world doing almost little or nothing to stop the carnage and threat of obliteration. The two Religious Leaders declared:

“Our gaze must firstly turn to those regions of the world where Christians are victims of persecution. (…) In raising our voice in defense of persecuted Christians, we wish to
express our compassion for the suffering experienced by the faithful of other religious traditions who have also become victims of civil war, chaos and terrorist violence.

At the same time, the international community must undertake every possible effort to end terrorism through common, joint and coordinated action. We call on all the
countries involved in the struggle against terrorism to responsible and prudent action. Interreligious dialogue is indispensable in our disturbing times. Differences in the
understanding of religious truths must not impede people of different faiths to live in peace and harmony. In our current context, religious leaders have the particular
responsibility to educate their faithful in a spirit which is respectful of the convictions of those belonging to other religious traditions. Attempts to justify criminal acts with
religious slogans are altogether unacceptable. No crime may be committed in God’s name, “since God is not the God of disorder but of peace” (1Cor14:33). (Joint
statement of Pope Francis and Patriarch Kirill in Cuba, 12/2/16).

The International community needs accurate facts and not propaganda. There are over 30 million Christians in Northern Nigeria, 31.25 percent of the population, a substantial minority. It is on account of this social and religious fact of being a minority that they suffer terribly from targeted violence. The following are quite evident: the politically motivated communal clashes following the 2011 post-electoral crisis; the Boko Haram insurgency in their quest to establish a Caliphate in the North Eastern Region of Nigeria; and the Islamist Nomadic Fulani herdsmen invasions aimed at forcefully dislodging and occupying the ancestral lands belonging to the aboriginal peoples and natives of the Middle Belt region of Nigeria, who are predominantly Christian population; all these are clear examples of premeditated and targeted attacks,
marginalization and discrimination against Christians.

These attacks are not random. The leader of the Boko Haram sect (Abubakar Shekau), made this point clear when he said: ...This war (waged by Boko Haram) is not political. It is religious. It is between Muslims and unbelievers (arna). It will stop when Islamic religion is the determinant in governance in Nigeria or in the alternative, when all fighters are eliminated/annihilated and no one is left to continue the fight. I warn all Muslims at this juncture that any Muslim who assists an unbeliever in this war should
consider himself dead. (From one of the video clips posted by Shekau).

Between 2006 and 2014 an estimated 11,500 Christians have been killed, over 1.3 million Christians have been displaced and 13,000 churches have been destroyed or
abandoned. The most affected Christian communities are in northern Adamawa, Borno, Kano and Yobe states. Christians in these states have had to relocate mainly to
the predominant Christian states in the Middle Belt areas: Plateau, Nassarawa, Benue and Taraba.

In these Middle Belt states, the Fulani herdsmen have incessantly terrorized communities, wiping some out, and in places like Agatu in Benue State and Gwantu
and Manchok in Kaduna State, these attacks have assumed genocidal character, as between 150 – 300 vulnerable persons were killed overnight. Attacks like these are
persistent and serial in nature. In the area where I live in the southern part of Kaduna State, a total of over 55 such attacks have occurred between 1981-2014. Whereas the
Boko Haram are pounding the minority Christian communities in the Muslim dominated States, the Fulani herdsmen, on the other hand, are invading, attacking,
killing and displacing people from their ancestral lands and forcefully settling themselves among them. This is taking place now in the predominant Christian and
minority areas in the Middle Belt.

From where will help come for the Christians and the minorities in Northern Nigeria?

What role is the international community going to play to stop this systemic and persistent violence, persecution, discrimination and marginalization of Christians in
Northern Nigeria. If these violations of human rights and dignity are left unchecked and halted, if Boko Haram and the Fulani herdsman achieve their well-publicized aims,
this could lead to the extinction of Christianity and Christian communities in Northern Nigeria, as the world is witnessing in North Africa, in the Middle East, and in some
parts of Western, Central and Southern Asia.

The international community must act now to address the humanitarian crisis of Christians living in Northeastern Nigeria and some Middle Belt areas, by establishing a
global fund to help in the meaningful rehabilitation of victims of these injustices. The properties and lands of fleeing Christians are being bought, confiscated or simply
occupied by the marauding and invading perpetrators of violence on Christians. The international community must take up this issue to ensure that both land and property
of Christians and other vulnerable minorities are returned to them unfailingly.

Our fight is not against Islam or against Muslims. We must love them and seek ways to live peacefully with true Mohammedans. But decisive action must be taken against
terrorists organizations like ISIS, Boko Haram, and Fulani Herdsmen who have been poisoned by extremists ideologies of hate particularly towards Christians and other
minorities in their midst. All those interested in the peaceful and harmonious coexistence of all irrespective of religious and ethnic differences must wake up from
their slumber, and stand together in not only condemning the unprovoked aggression that had been waged against vulnerable and innocent people, but concerted effort
must be made by all people of good will to resist, degrade and conquer terrorism in the world. We must never allow this aggression to continue in our world.

There is nothing religious in employing violence and unleashing it on innocent people in the name of God. Religious extremism as expressed by Boko Haram in Nigeria and
ISIS in Iraq and Syria, are to me sheer acts of criminality that must be condemned by all people of good will. As Pope St. John Paul II once said: "Religion is not and must not become, a pretext for conflict (or this kind of senseless blood-letting) ........ the only religion worthy of the name, is the religion that leads to peace and that true religion is mocked when it is tied to conflict and violence". True religion is concerned primarily with the worship of God, which includes adoration, praise, thanksgiving, love and
making of supplications. Anyone who does not love the brother that he sees cannot love the God whom he has never seen.

True religion must be on the side of peace and must publicly - in words and actions - repudiate violence. It is a profanation of religion to declare oneself a terrorist in the
name of God, to do violence to others in his name. Terrorist violence is a contradiction of faith in God and is incompatible with the authentic spirit of Religion.