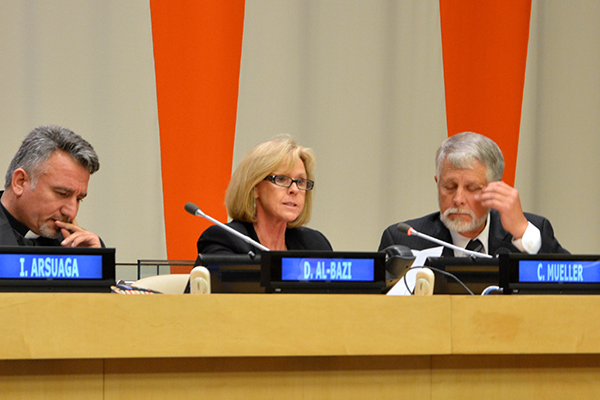 Remarks by Carl and Marsha Mueller
As delivered during the event organized by the Permanent Observer Mission of the Holy See to the UN, together with co-sponsors CitizensGo, MasLibres and In Defense of Christians on April 28, 2016 at the UN Headquarters in New York
By Carl and Marsha MuellerParents of Kayla Mueller, a young aid worker and ISIS/Daesh hostage who was killed in Syria

We would like to thank Citizen Go for the invitation to speak and thank the ambassadors, delegates, UN officials and all in attendance for your defense of religious freedom and human rights.

We are the parents of Kayla Jean Mueller, the 26-year-old humanitarian aide worker who was kidnapped by terrorists in Syria as she returned from a Doctors' without Borders hospital in Aleppo.

Kayla was returning to Turkey where she was employed by a network of NGOS aiding the refugees. Kayla was brutally tortured and held hostage by ISIS for 18 months before being killed in February 2015.

We understand that the last five months of her life were spent as a personal hostage to the self-proclaimed caliph, Al-Baghdadi, and that her treatment during that time was as horrific as that suggests.

Kayla displayed an extraordinary sense of compassion and willingness to be a voice for those who suffered. Kayla had a unique blend of a disciplined mind and a generous heart.

And as Bertrand Russell said "an unbearable pity for the suffering of mankind."

Kayla graduated with honors from Northern Arizona University having studied World Religions, International Affairs and Political Science, with a special interest in the Middle East.

Kayla planned to go on to graduate school in an area that promoted peace, religious freedom and relieving suffering and injustice, but first she wanted to learn directly from the people who were most profoundly impacted by the politicat economic and social structures we collectively support.

"Here we are.
Free to speak out without fear of being killed,
blessed to be protected by the same law we are subjected to,
free to see our families as we please,
free to cross borders and free to disagree.
We have many people to thank for these freedoms
I see it as an injustice not to use them to their fullest."

Kayla believed we each had an individual responsibility, but her hope was in our collective action and used her voice to call out to the world.

In a letter to me in 2011 Kayla wrote,
"I've known for some time what my life's work is, using my hands as tools to relieve suffering."
She also told us,
"I find God in the suffering eyes reflected in mine, if this is how you are
revealed to me this is how I will forever seek you."

Helping the suffering was her life's work While working in a refugee camp in Turkey she was asked "where is the world" having no answer she could only cry with them.
In March of 2013, Kayla posted this on Face book.

"I want to tell the world about the situation in Syria ... There is no fuel, no electricity, no food. This is the situation.
There is shelling, explosions, gunfire ... violence, death. No one is working, there are no jobs.
People are just surviving day to day, living for the sake of living ...
Every human being should act they should stop this violence.
It is killing women and children.People are fleeing . ... This, this is too much ... "

"I hope that you can tell the entire world what I have said here, what I have seen.
I am only one person, but every person will say the same ... I wish the world could see the truth. I wish you could.
I don't think there is a single child untouched by this war. Everyone has seen death, everyone has lost someone.
When the world finally sees what is happening in Syria, when you go to villages beyond those you
are 'allowed' into - you will not have the words. Everything is destroyed. A people is destroyed.
"You ... will not be able to bear what you will see in Syria.
We know what is happening, but the world is not listening."

In the spring of 2013 as things in Syria were getting worse, I asked
Kayla to come home. I told her this was not her war and not her people and she did not need to die for it.

This was her response:
"You are right , this is not my war.
I would never stake claim to something as barbaric as war.
But, any struggle for greater freedom and justice is my struggle and any
time innocent lives are being slaughtered, they are my people
And any time the world is not responding to such things because "it is not
their concern." It becomes my concern.

Because of my privileged American life, I've been able to purposefully build my life in such a way that this idealism can be my life and my work and I can act and stand by the fact that this is the way it should be. There should be no 'my people, your people' mentality in this world. There should be no greater value placed on anyone's life for any reason. I don't think that's idealism, in one form or another that's what jesus said. I don't know why we call what is .. .just ... idealism. I think we place it in that category because we know what is .. .just ... and we know we aren't doing it despite being able."

We have also heard from those held with Kayla.

First from women who were held with her in the same prison that held the Western hostages ISIS brutally murdered on camera, women who were thankfully released through negotiations.

They told us how Kayla retained her religious freedom, finding ways to cope with the demands of her captors, but also deepening her faith and relationship with God. They spoke of her kindness and strength, of her faith and compassion. These women courageously smuggled a letter out of prison. In it Kay Ia wrote:

If you could say I have "suffered" at all throughout this whole experience it is only in knowing how much suffering I have put you all through ... I remember mom always telling me that all in all in the end the only one you really have is God. I have come to a place in this experience where, in every sense of the word, I have surrendered myself to our creator b/c literally there was no else .... + by God + by your prayers I have felt tenderly cradled in free fall. I have been shown in darkness, light+ have learned that even in prison, one can be free. I am grateful...

I pray each day that if nothing else, you have felt a certain closeness + surrender to God as well + have formed a bond of love +support amongst
one another ...

None of us could have known it would be this long but know I am also fighting from my side in the ways I am able+ I have a lot of fight left inside
of me. I am not breaking down +I will not give in no matter how long it takes.

She went on to write:

The thought of your pain is the source of my own; simultaneously the hope of our reunion is the source of my strength ... Please be patient give your pain to God. I know you would want me to remain strong. That is exactly what I am doing. Do not fear for me, continue to pray as will I + by God's will we will be together soon.

All my everything, Kayla

And from the brave Yezidi girls held hostage with Kayla who escaped, we have learned a little bit about Kayla's time as hostage to the Caliph, held in a house run by Abu and Umm Sayyaf.

We learned about the horrors of that time, but also how under unimaginable distress and hopelessness and in total anonymity how Kayla lived her life- claiming the freedom to be compassionate and to hold onto her faith- the only real freedom she still had. They said she was like a mother or sister.

That while food was often scarce; Kayla would eat only a little, giving them her share.

With the vast majority of western hostages released through negotiations, Kayla must have understood that her chance for release and coming home diminished each day. Still, she instilled hope in these young women.

They said that she protected them, putting herself in harm's way to protect them from physical violence, and tried to hide her pain from them so they would not get discouraged. We do not know when or how Kayla was killed.On February 6th, 2015, ISIS tweeted that Kayla had been killed. Our hearts are broken.

We miss her terribly and we grieve over all she endured. We believe Kayla could have been released and still have many unanswered questions.

The one thing we can do is to continue to tell the world about the suffering she witnessed, to call the world to act with one voice to protect freedom and to relieve the suffering that Kayla gave her life for, refusing to allow this genocide to be normal.

This past January, Nicolas Henin, one of the French journalists held in the same prison as Kayla and the other Western hostages spoke with Democracy Now and also spoke of Kayla:

"We had to speak the day before we were freed with Kay/a Mueller for the first time for 5 minutes. They brought her to our cell. They wanted us to report that she was with us and alive. She explained a bit about what she had been through. She looked extremely brave. She was incredibly courageous. She spent several months in isolation. She was impressive. She had a beautiful inner strength. I mean she was strong inside. She obviously had been through some tough moments. She managed well to overcome them. I was just impressed. She was looking beautiful. She was strong. To the point that jihadi john believed that she converted to Islam and she said I just want to correct you. I have not converted. I mean nobody would have dared to contradict him. But she did. She was not aggressive but no, please let me correct you. I did not convert. Very calm, but very decided. She was very impressive."

From Kayla's letters and the witness of other hostages, we know Kayla did not compromise on what she believed should be her response to the suffering, nor on her relationship with God. Kayla believed relieving suffering was a God given responsibility for each of us.

Kayla maintained a steady voice of compassion and we believe it is our duty to carry her voice forward, telling the world what Kayla witnessed, encouraging the world to refuse to allow this suffering to be normal. Kayla was one courageous voice calling the world to speak with one voice and with action-to have the same courage and commitment to "give all our everything" for the sake of peace, justice and religious freedom.