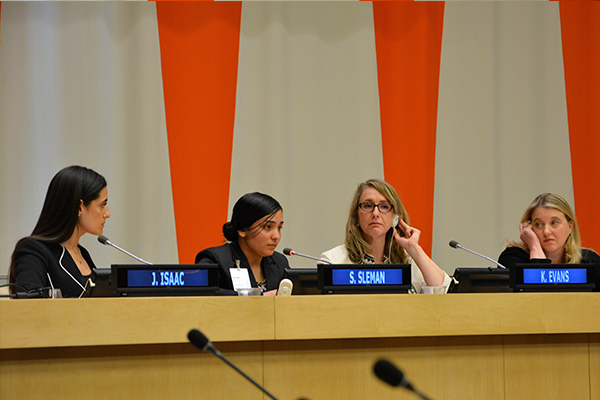 Remarks by Samia Sleman
As delivered during the event organized by the Permanent Observer Mission of the Holy See to the UN, together with co-sponsors CitizensGo, MasLibres and In Defense of Christians on April 28, 2016 at the UN Headquarters in New York
By Samia Sleman15-year-old Yazidi girl kidnapped by ISIS/Daesh

Defending Religious Freedom and Other Human Rights: Stopping Mass Atrocities Against Christians and Other Believers

Today I am thankful that all of you are here to hear my story and to hear the genocide happening to the Yazidis. My name is Samia Sleman, I’m 15 years old. On August 3, 2014, ISIS attacked our village.

They took me and my family, they took us captive. My dad, my uncle and my grandfather are still in captivity.  At the time they took all the men, they handcuffed them and separated them from the group of women and girls. Women, girls, and young kids, and took us all to their headquarters in Tal Afar. They confiscated all of our belongings at the time. I was in captivity for 6 months and 12 days in the hands of Islamic state. They raped and violated myself and the girls that were with me in captivity.

There were thousands of Yazidi girls in captivity in headquarters and they separated us into different groups. ISIS forced us from our areas; they forced us to convert to Islam. They separated the kids from our mothers, from our parents.

Today I am here to tell my story and ask the international community to help us, to protect us and Christians and other minorities in the area. If this continues, there will be no Christians, no Yazidis in that region because they are suffering. They have been suffering for years. Especially those in the camps right now, they don’t have the proper services they need.

I hope that the international community, especially the United Nations, will recognize this genocide against the Yazidis and other minorities. The situation these minorities are in is difficult at the moment. It has been years, and when I was in captivity, at the time I was 13 years old, they not only raped me but other girls with me. I’m not the only girl that suffered under ISIS like this; there were many, many other girls that suffer like this.

We hope the international community and Western countries will help the Yazidis and Christians and open their border for them if they cannot protect them in that region and provide protection for them, they will open their borders and welcome these minorities in the Western world. We see that our people don’t have the force and the ability to defend their people because we are treated as second-class citizens in that country.

Why are these innocent kids and these innocent people suffering this much in that region? Why don’t we see any action being taken even though it has been over a year and half now? We have seen terrible things happen to us minorities, especially the Yazidis and Christians in that region and we don’t see the international community taken concrete actions against the Islamic State.

As I said, I hope and wish the United Nations will help the Yazidis and others because they need help right now. This is a difficult time for them. There are thousands of Yazidis migrating because they simply cannot live there because they feel hopeless living in that country without protection.