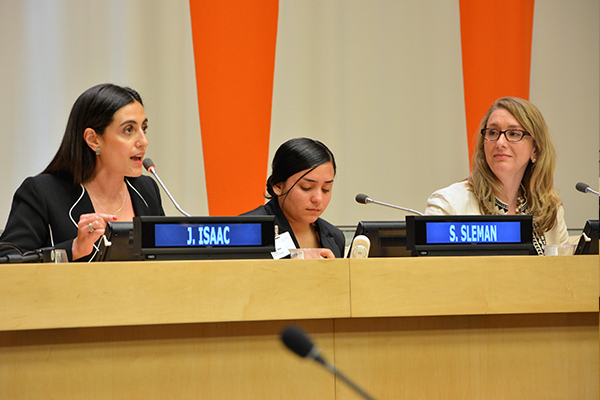 Remarks by Jacqueline Isaac
As delivered during the event organized by the Permanent Observer Mission of the Holy See to the UN, together with co-sponsors CitizensGo, MasLibres and In Defense of Christians on April 28, 2016 at the UN Headquarters in New York
By Jacqueline IsaacAmerican-Egyptian Humanitarian Attorney and Vice President of Roads of Success

The U.S. Congressional Foreign Affairs Committee, Jacqueline Isaac recently testified at, passed two bipartisan measures to address the violent acts that constitute ISIS’ genocide against Christians, Yazidis and other religious minorities. They passed the bills based on all the evidence presented at various hearings. For Jacqueline Isaac's full testimony from the official C-Span website, please see this link.

Also see this passage by Chairman of the FAC, Ed Royce, “ISIS commits mass murder, beheadings, crucifixions, rape, torture, enslavement, and the kidnapping of children, among other atrocities. ISIS has said it will not allow the continued existence of the Yezidi. And zero indigenous Christian communities remain in areas under ISIS control. So as ISIS destroys churches and other holy sites, they move closer towards eliminating certain communities. Put simply, their desire is to erase the existence of ethnic and religious minorities from their self-proclaimed caliphate, by any means necessary. ISIS is guilty of genocide and it is time we speak the truth about their atrocities. I hope the administration and the world will do the same, before it’s too late."

This year, we have traveled four times to Iraq, three times to Egypt, and twice to Lebanon to help survivors fleeing from ISIS. ISIS has sold many girls as merchandise, classifying their price according to age, beauty, and virginity. Left with the horrid memories of rape and torture, some of the women and girls once enslaved by ISIS ended their own lives. Entire Christian families also faced horrible situations while in captivity.

Unfortunately, not enough governments are acting to help rescue the survivors who are being sold at the ISIS slave markets. We spent significant time with those displaced and/or affected by ISIS in Iraq and families of the Christian Egyptian martyrs who were killed by ISIS in Libya. It is clear to me that ISIS aims to eliminate all religious minorities in the region; ISIS continues to destroy the towns and livelihoods of the ancient Yazidi, Christian and other religious minority communities. The survivors are calling on the world to save their ancient communities from complete destruction. Although ISIS intended to destroy through enslavement, rape and torture, they could not capture the souls of the courageous and resilient survivors I encountered.