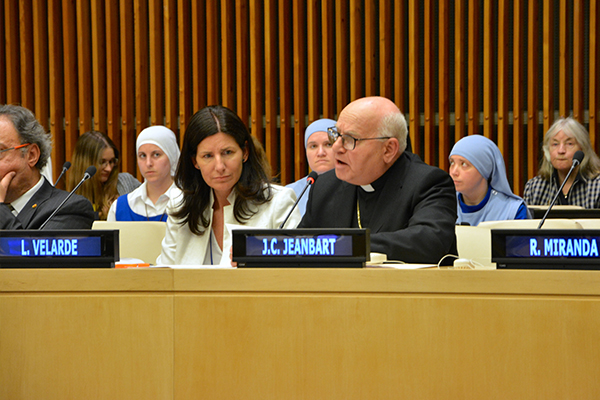 Christians and the war in Syria

In my country Syria, Christians are caught in the middle of a civil war and are in grave danger: we may disappear soon. We hope that you will listen to our call and give us a helpful hand in relieving our misery.

For the past five years there has been much talk about the war in Syria and the violence afflicting the innocent population.

For the church, what is most important is that peace be restored! And that, through peace, a non-confessional and pluralistic democracy be established, that guarantees all
Syrians their God-given rights to live as full-fledged citizens in the country where they were born and where their ancestors are buried.

For centuries, Syrian Christians lived peacefully in a society alongside a Muslim majority that was tolerant. There was
a cordial atmosphere of mutual acceptance and friendship. This is no longer the case. Syrian Christians are disoriented
by the implosion of a way of life that was once quiet and safe.

Christians are victims of a war of destruction led by a foreign element taking advantage of unrest. They have injected arms, money, and tens of thousands of fighters, Jihadists, fundamentalists, and mercenaries, recruited from many different countries.

Aleppo is truly a disaster zone, a humanitarian, material and economic disaster zone,. The citizens of this great and beautiful city, with its seven thousand years of history, find themselves, after five years of senseless war, in a desperate situation. The prosperity that Aleppo enjoyed in the past is lost. Innumerable attacks have destroyed its churches, its factories and its flourishing industry, its infrastructure and social and administrative institutions, its commercial areas, its ancient homes, schools, and hospitals.

Then there are the countless frustrations which the people of Aleppo have had to endure because of the siege, particularly the shortage of food and other essential supplies.
Since the beginning of this senseless war, the Church has called for an end to armed conflicts and encouraged negotiations to achieve a political solution to this crisis. Of course we are grateful that a large coalition of nations is committed to stopping ISIS. Nevertheless, at the present time, in both Syria and Iraq, Christian communities – along with other vulnerable minorities – are defenseless against the assaults of ISIS. If these poor people are to survive, the
international community must provide better protection and execute a more aggressive strategy.

Across the region, as the fight is taken up against ISIS, the Christians and other minorities are often caught up in the fighting, facing calamities as they are displaced, without any provisions for shelter, food, and medical assistance. The emergency needs of vulnerable populations must be more fully considered and met.

Once – God willing – ISIS is defeated and a measure of piece is restored to our land, Christians must be able to count on the international community for continued, longterm protection. To ensure political stability, it is essential that Christian leaders, both lay and religious, are given a voice and presence at the negotiating table. Christians bring forth a vision inspired by democratic and humanistic values; they can act as bridge builders between Shiites and Sunnis, and they can help develop a political system that ensures the right of all citizens.

Last but not least, Christians – like other people whose lives have been overturned by years of fighting – need practical, financial help to rebuild their lives, especially their professional lives. That’s why we have launched the ‘Build to Stay’ program in Aleppo, a social development initiative that needs to be supported by a solidarity fund.
On the day when God, with the help of the international community, will grant us peace and stability, this program will gather people and volunteers to build the future of our community.

If the war continues, however, and peace is not restored, all hope may be lost for all Syrians Christians and Muslims alike and violence and chaos will inevitably take hold in neighboring countries.

Thank you very much for holding this Conference and for giving me the chance to speak on behalf of my people.