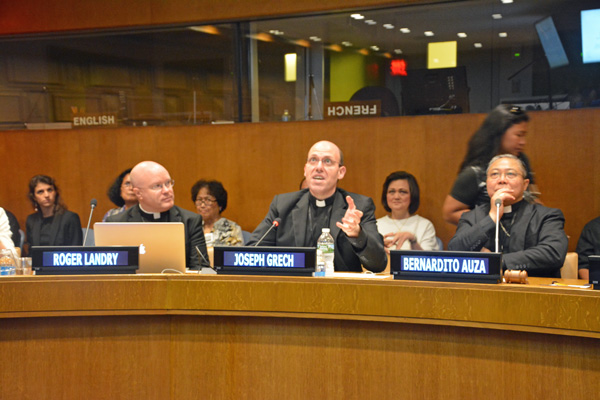 Twelve members of the Holy See staff, including priest diplomats, attachés and interns, delivered presentations to unveil the workings of both United Nations and the Holy See, and the relationship between the two institutions. Bohol-born Archbishop Bernardito Auza, Permanent Observer of the Holy See Mission to the UN, moderated the conference.

“The Holy See represents not only the Pope, but the whole Church,” Archbishop Auza said. “Instead of inviting experts from the United Nations, we thought it would be more intimate for all the interventions to be made by members of the staff of the Holy See Mission.”

Monsignor Joseph Grech, member of the Diplomatic Corps of the Holy See who has served at the United Nations for three years and will begin a new assignment in Kiev, Ukraine in September, presented both the history of Holy See diplomacy as well as the present situation where the Holy See has diplomatic relations with 180 different States.

Father Roger Landry, an attaché who coordinates special events for the Mission, gave an historical overview of the Holy See’s relationship with the United Nations. He shed light on what it means for the Holy See to be a Permanent Observer State at the UN and highlight many of the Mission’s priorities by means of the five papal visits to the UN. He described that the Popes have always expressed esteem for the United Nations as a much needed institution, while at the same time that they have said that, similar to the Church, it is an institution, it is an institution perennially in need of reform. He noted that the four pillars of the United Nations Charter are all important areas in the doctrine of the Catholic Church.

“The Holy See seeks to bring a perspective influenced by the light of the Gospel and the Church’s bimillennial experience of humanity to the international debate,” he said. “Respecting dignity of every human life is always a priority because that dignity is regularly under attack.”

Rachana Chinn, who has served the Mission for the last year as a legal fellow and will begin his Master’s in International Human Rights Law at the University of Notre Dame Law School this month, gave a presentation on the history of the United Nations, drawing attention to the four pillars of the United Nations: upholding fundamental human rights, international law and treaties, international peace and security, and advancing the economic and social advancement of all peoples.

Grazie Christie, a Harvard Junior and summer intern at the Mission, described the structure of the UN, which is composed of 193 Member States, two Permanent Observers, and many organs, bodies and agencies.

Thiago Pinheiro, Holy See Mission Intern who is a law student in Brazil, delivered an intervention on the Holy See’s role at the Security Council written by Monsignor Simon Kassas, who serves the Mission as First Secretary but was unable to be present. The Holy See is deeply interested in many topics followed by the Security Council, Kassas wrote, including armed conflict, violent extremism, peacebuilding, and the status of refugees and migrants.

“As broad as the conflicts are, so too is the activity of the Holy See to work with the Security Council in preventing war,” Kassas said. “The Holy See is a voice for mediation and dialogue, a voice opposing violence as a tool of conflict resolutions.”

Giorgio Mazzoli, a legal fellow from Italy, shared the Holy See’s interests in First Committee issues, which is the body dedicated to disarmament.

“Disarmament contributes to creating a climate of mutual trust among nations, with positive repercussions on the building of true security and durable peace,” he affirmed.

Denalda Cupa, a Holy See Mission intern spoke about the priorities of the Holy See with regard to the work of the Second Committee, which deals with issues relating to economic growth and development. She introduced attendees to the 2030 Agenda for Sustainable Development, a 17-goal-initiative to further economic development, social development and environmental protection.

“These three pillars of sustainable development overlap with Catholic Social Teaching and what Pope Francis has mentioned as the four elements of integral ecology: human, economic, social and environmental,” she said.

Attaché Timothy Herrmann, who negotiates resolutions related the UN’s Third Committee, dedicated to human rights issues, said some main human rights issues the Holy See follows include the advancement of women, protection of children, indigenous issues, treatment of refugees, promotion of fundamental freedoms and right to self-determination, as well as focusing on the importance of the family. He said the Holy See focuses on human rights through the lens of Catholic social teaching on the dignity of the human person and defense of human life at all stages, including the unborn and elderly.

“The Committee also considers draft proposals or resolutions, meant to address the concerns voiced by Member States on these topics and to build consensus on how these concerns are being addressed,” he said.  “We like to bring a holistic approach to these negotiations.”

Attaché Kallie Aultman, who also negotiates resolutions for the Holy See Mission on Second and Third Committee issues, spoke about the Holy See’s interest in the advancement of women and girls, which includes emphasis in elimination of violence and trafficking, enabling women to take part in peacebuilding, and providing access to education and holistic healthcare. She said the Mission focuses on including language that authentically bolsters the status of women throughout the world without compromising the dignity of their bodies through abortion and artificial contraception, masked under the terms “sexual and reproductive health and reproductive rights.”

“Women must be empowered to become agents of their own develop and drivers of sustainable development,” Aultman said.

Notre Dame Law Student Mathew Hoffman spoke on the presence of topic of religion at the UN, noting that in recent years the UN has been increasing the input and involvement of religious leaders and faith based organizations in various areas like the fight against extremist violence, development and peacebuilding

“The UN does not have the funds or manpower to achieve its goals by itself,” he said. “There is increasing awareness of and gratitude for the contributions of faith-based organizations.”

Monsignor Hilary Franco, an Advisor at the Mission, finished the day by speaking about The Path to Peace Foundation, the US-based foundation that supports the work of the Holy See Mission to the UN and spreads the Pope’s message of peace on the international stage. Because of The Path to Peace Foundation, the Holy See Mission can bring in qualified staff and experts and hold events that call attention to humanitarian needs throughout the world, he said.

He described that The Path to Peace Foundation holds an annual gala to honor with the Path to Peace Award. a prominent figure who has worked to promote peace This year the Gala will be held on October 12, and will honor the Knights of Columbus and Supreme Knight Carl Anderson, for their humanitarian work, especially in defense of persecuted Christian in the Middle East.

Those interested in watching the event may view it on UN Web TV.