Archbishop Wenski Challenges UN Community Not to Be Indifferent to Refugees and Migrants
By Mary Ann PoustFlorida Catholic; Archdiocese of Miami 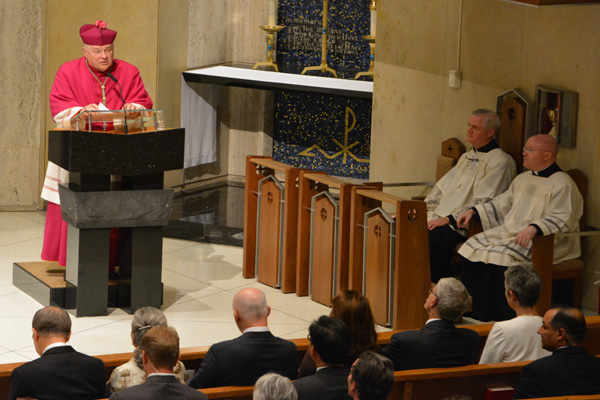 With refugees and displaced peoples hitting record numbers around the world, Archbishop Thomas G. Wenski called on diplomats gathered for the opening of the 71st United Nations General Assembly in New York to rise to the challenge of this “humanitarian disaster.”

In powerful remarks to listeners that included U.N. Secretary General Ban Ki-moon, Archbishop Wenski said the unprecedented 65 million people displaced from their homes may be the most pressing of the many challenges facing the global community today.

“History will judge us on how we respond to this crisis,” he said. “Let it not be said that we were indifferent to it.”

Archbishop Wenski told the ambassadors and other diplomats “every human being, just because he or she is a human being, has a right to live in conditions worthy of human life.”

“When people do not find conditions necessary for human flourishing where they are – because of lack of economic resources, political oppression or religious or social persecution – they will seek or will be forced to seek such conditions…elsewhere,” he said.

“Our world leaders must decide to meet this challenge by increasing their commitments to the protection of these vulnerable refugees and migrants,” he said.

The Miami archbishop delivered the talk at a Sept. 13 prayer service at the Church of the Holy Family, the United Nations parish in Manhattan.

The Permanent Observer Mission of the Holy See to the United Nations and the Archdiocese of New York sponsored the service, an annual event that marks the opening of the General Assembly session.

Among those attending was Peter Thomson, the Permanent Representative of Fiji's Mission to the U.N., who was sworn in earlier that day as president of the 71st session of the General Assembly.

Archbishop Bernardito Auza, the Permanent Observer of the Holy See to the U.N., invited Archbishop Wenski to address the service because the Miami prelate has been known for many years as a leader of the U.S. bishops’ efforts on migration and refugee issues.

The topic will be a top priority in General Assembly discussions in the 71st session, Archbishop Auza said in an interview earlier in the week. Indeed, on Sept. 19 a high-level conference, the U.N. Summit on Refugees and Migrants, will consider how countries of the world might fashion a better response to the crisis.

In the interview in his New York City office, Archbishop Auza said the humanitarian crisis born of the large movement of refugees and migrants, especially forced migrants, is “still a growing phenomenon and solutions are still to be found.”

He said a major hurdle is “having nations agree on common policies on this very complex and urgent issue.”

Archbishop Auza said he was very happy that Archbishop Wenski, a senior prelate with a long commitment to the issue, accepted the invitation to address the prayer service.

Given the high level of dignitaries expected, he said, “Archbishop Wenski will have the eyes and ears of the United Nations and the world.”

The Holy See, which has had a presence at the U.N. since its development after World War II, chooses to retain its Permanent Observer status rather than apply for full membership as a way to protect its image as a neutral state. However, the mission is deeply involved in the debates and conferences and is a party to many international instruments such as the Treaty on the Non-Proliferation of Nuclear Weapons.

Last year the Holy See, through its Permanent Observer, actively participated in the debates and negotiations leading to the adoption of major international commitments, including the 2030 Agenda for Sustainable Development and the Paris Agreement on Climate Change.

Popes over the years have been supportive of the U.N. and its mission, Archbishop Auza said, quoting the first address of a pope to the world body, Paul VI in 1965, who said the Catholic Church is “an expert in humanity.”

“That is our specific contribution to make,” Archbishop Auza said. “We are all about humanity.”

At the September 13 prayer service service, Archbishop Auza led the congregation in a prayer given by Pope Francis in April at a detention camp for migrants in Lesbos, Greece, which begins: “Merciful God, We pray to you for all the men, women and children who have died after leaving their homelands in search of a better life.”

Secretary General Ban, beginning his 10th and final year leading the U.N., also addressed the prayer service, which he called an inspiration to him at the start of a new General Assembly session.

“I gather strength from the uniting of faith traditions for the common good,” he said.

“The opening of the General Assembly is itself a profound act of faith – faith in humanity, faith in our shared future, faith in our conviction that together we are stronger,” Ban said.

Archbishop Wenski, in his remarks, pointed out that the crisis in the Middle East is “of staggering proportions,” with 11.5 million Syrians displaced, of whom 6.6 million are internally displaced in their homeland, with another 5 million living in neighboring countries or other parts of the world.

“While some in the world community have responded generously to this situation, others still need to join them and share in the responsibility to respond,” he said.

He noted also that the United States has seen a dramatic movement of people “in our own backyard,” with Central Americans fleeing violence in Honduras, El Salvador and Guatemala.

“While migratory flows, especially when they take place in an irregular fashion, present challenges and problems to the host countries, we must not look at the migrants themselves as ‘problems,’” he said. “No human being should be regarded by another human being as just a problem.”

Archbishop Wenski also asked for prayers that the current “scourge of xenophobia and racism no longer be part of our discourse when considering the well-being of those on the move.”

“Human values must not be sacrificed in the name of security,” he said.

“Let us pray tonight,” said Archbishop Wenski, “let us pray that as a global community, we can heed the words of the Holy Father and follow the Golden Rule.”