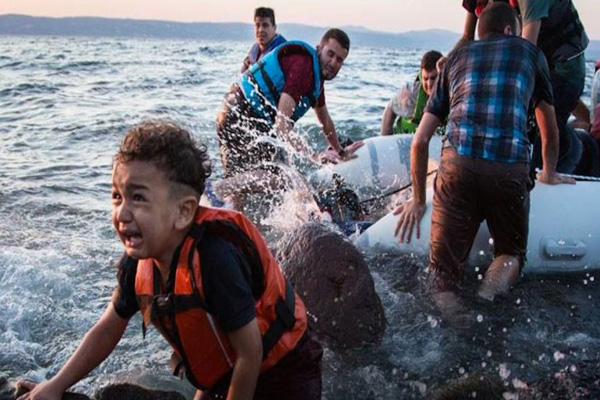 Cardinal Parolin: The Role of Religious Organizations in Responding to Large Movements of Refugees and Migrants
By His Eminence Cardinal Pietro ParolinSecretary of State of His Holiness Pope Francis 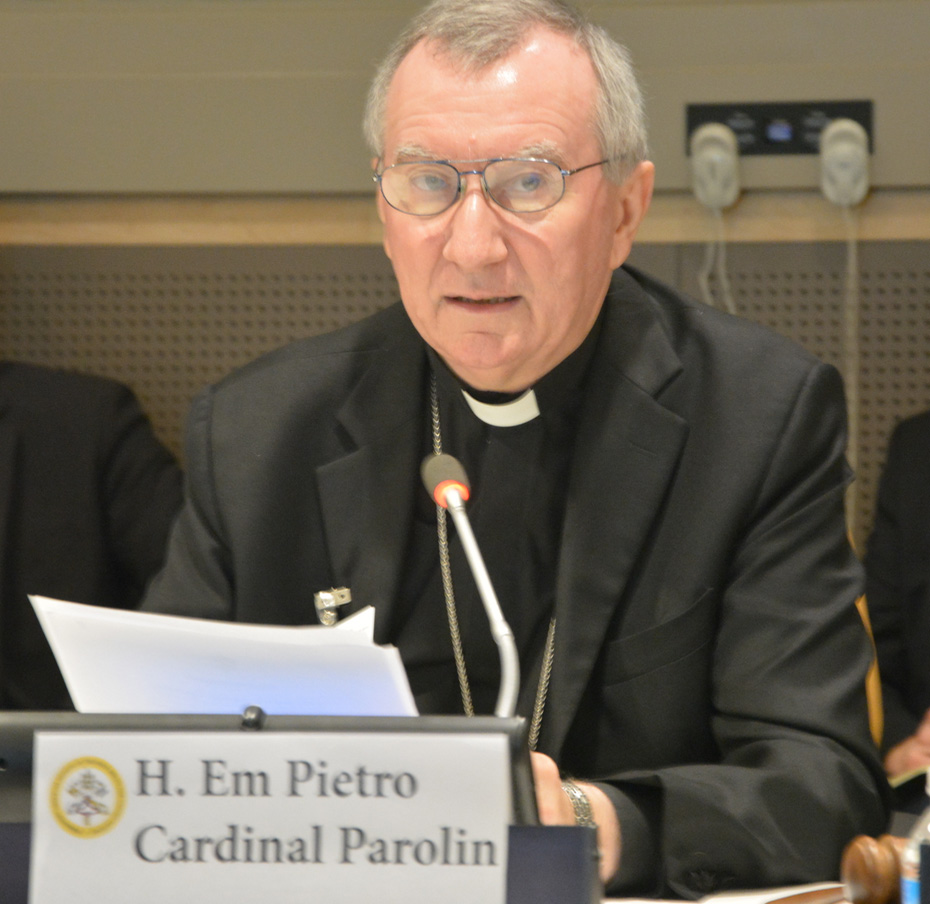 I greet you all in the name of His Holiness Pope Francis. I am delighted to be with you in this morning’s event on the theme of Responsibility and Solution Sharing: The Role of Religious Organizations in Responding to Large Movements of Refugees and Migrants.

The challenges posed by large movements of refugees and migrants are of grave concern for both the Holy See and the United Nations. The 2030 Agenda for Sustainable Development pledges to “leave no one behind.” Among those left behind are the tens of millions of refugees, migrants and internally displaced persons in our world today.

While migration has always been with us, it is becoming an unprecedented phenomenon in our days. I am well aware that the statistics and impact of these migratory movements will be reviewed repeatedly throughout today, so I will not impose upon our limited time together to repeat these numbers.

I wish, however, to underline the worrying fact that so many of the large movements of refugees and migrants these days are involuntary, caused by situations of conflict and violence, persecutions and discrimination, poverty and environmental degradation. It is even worse when we consider that, during their journey, migrants and refugees face the dangers of trafficking, starvation and many forms of abuse, and upon arriving at their destination, rather than finding a safe haven, they find mistrust, suspicion, discrimination, extreme nationalism, racism and a lack of clear policies regulating their acceptance.

Through the centuries, religious institutions and faith-inspired organizations have played important roles in responding to the needs of refugees and migrants. Through this event, the Holy See intends to express profound gratitude for what religious institutions and faith-based organizations have done and continue to do in favor of refugees and migrants, and to examine how the services they provide can be improved further, both quantitatively and qualitatively, in these most challenging times and situations.

From time immemorial, people from a wide range of faith traditions have given special attention to the needs of migrants and refugees.

The Jewish People were deeply molded by their experience of Exodus, an experience of dispersion, exile, slavery, then freedom in the Promised Land. Some centuries earlier, the Patriarch Abraham had followed God’s call to migrate from his ancestral home to the land of Canaan. The Judeo-Christian tradition regarding the treatment of refugees and other migrants is firmly rooted in this ethical and religious injunction: “You shall not oppress an alien: you well know how it feels to be an alien since you were aliens yourselves in the land of Egypt” (Exodus 23:9).

Jesus, who himself was a refugee during his earliest years, taught the actions that will determine our Final Judgment: “Then the king will say to those on his right, ‘Come, you who are blessed by my Father. Inherit the kingdom prepared for you from the foundation of the world. For I was hungry and you gave me food, I was thirsty and you gave me drink, a stranger and you welcomed me…” (Matthew 25:34-35).

Muslims measure time from the founding event of Muhammad’s hejira from Mecca to Medina. The Qur'an teaches that believers should “serve God… and do good to… orphans, those in need, neighbors who are near, neighbors who are strangers, the companion by your side, the wayfarer that you meet [and those who have nothing]” (Surah 4:36).

For institutions and members of the Catholic Church, our reflections and actions in response to refugee and other migration movements are guided by the rich body of Catholic Doctrine and Tradition that has developed during the course of the past two millennia.

Pope Francis has undoubtedly placed refugees and migrants at the top of his agenda. It was neither a casual decision nor a random choice that Pope Francis’ first trip outside Rome was to the Mediterranean island of Lampedusa in July 2013 to witness to human solidarity and Christian charity for refugees and migrants first hand, and to underline the Catholic Church’s deep commitment to the welfare of the most vulnerable and needy of our brothers and sisters. He prayed for the dead, asked forgiveness for the failure of the global human family to respond to sufferings of refugees and migrants, for what he called the globalization of indifference, and he challenged our consciences, lest the tragedies that have sent thousands to their deaths be repeated.

In April 2016, Pope Francis, together with the Ecumenical Patriarch Bartholomaios and Archbishop Hieronymos of Athens and of All Greece, went to Lesbos, Greece, to demonstrate their profound concern for the tragic situation of the innumerable refugees, migrants and asylum seekers, and to call for a “response of solidarity, compassion, generosity and an immediate practical commitment of resources”.

While fighting to eliminate the root causes of large movements of refugees and migrants, we are faced with tens of millions of peoples who urgently need our care.

Local faith communities, both Christian and others, are generally attentive to the protection of people and serve as first responders to refugee movements across borders and to those internally displaced. In environments characterized by fear, violence and suspicion, they provide a human approach and immediate assistance for the basic necessities of life, and the vital health needs of migrants, post-traumatic physical care and emotional support, services of accompaniment and advocacy, facilitating and forming positive cross-community relationships, as preconditions of sustainable humanitarian projects, community resilience in the aftermath of crises, and local integration.  It is said that while faith-based organizations are not always the first to respond to emergencies, they are often the last to leave.

Faith communities’ activity in this field confirms them as competent and essential stakeholders in facilitating collaboration. This is important especially where conflicts and violence aim at destroying the presence of believers of certain faiths and expel them, even if that presence is an ancient one and an important moderating and geopolitical balancing factor.

A little more than a year ago, Pope Francis appealed for Catholic parishes in Europe to welcome a refugee family. Because of this appeal, more than 30,000 migrants are being hosted by various religious structures. For those refugees who cannot remain in the country of asylum or return to their respective home countries, some faith-based organizations are engaged in organizing their resettlement in a third country. Both our co-sponsors of today’s event, the International Catholic Migration Commission and Caritas, have been extremely active in such processes in many parts of the world.

Faith communities have developed humanitarian passageways so that Syrians already recognized as refugees can avoid dangerous journeys to seek resettlement in Europe. The refugees for whom Pope Francis assumed responsibility, those he brought with him from Lesbos and those who came later, were channeled through this program.

Many Catholic institutions work to assist migrant women and girls, rescued victims of trafficking (many of them forced migrants). Religious orders have prioritized protection and education for migrant children. It is tragic that around the world nearly fifty million children have migrated across borders or been forcibly displaced, twenty-eight million of whom fleeing violence and insecurity.

We are fully aware that we must also improve our efforts at coordination and raise voices to address the root causes of their displacement. In the seas of the Mediterranean, the Red Sea and the Caribbean, in the deserts of North Africa and the Middle East, in the jungles of Sub-Saharan Africa, South-East Asia and Latin America, millions risk everything; thousands have lost their lives while trying to escape conflicts and violence, persecution, environmental degradation, abject poverty.

In Lesbos, Pope Francis, the Ecumenical Patriarch Bartholomaios and Archbishop Hieronymos urged the international community to fight these underlying causes of massive humanitarian crises, through diplomatic, political and charitable initiatives, and through cooperative efforts.

Among the world emergencies that cause displacement, those which concern the African continent tend to be neglected. Too many countries are facing extreme insecurity and violence, enduring and ongoing conflicts.  Moreover, in too many cases, people’s religion, an integral part of African identity, has been manipulated in an offensive way. Nevertheless, there are numerous examples of interreligious dialogue and action that continue to play a key role in preventing displacement while maintaining social cohesion and dialogue. Similarly, such action counters innumerable violations of human rights, environmental degradation, corruption, obscure financial and commercial plans, unequal assignment and delivery of development funds. These joint efforts seek to foster peace and the renewal of the human and social fabric in post-conflict areas.

I am particularly happy to mention a decision which further emphasizes His Holiness’s concern for uprooted peoples. In instituting the new Dicastery for promoting Integral Human Development at the beginning of this month, Pope Francis placed under his personal guidance the section that specifically oversees matters concerning refugees and migrants.

I will close my remarks with the Pope’s own words, words that could serve as a firm foundation on which to build an effective action framework for the Summit. He states: “A nation which seeks the common good cannot be closed in on itself; societies are strengthened by networks of relationships. The current problem of immigration makes this clear… dialogue is essential. Instead of raising walls, we need to be building bridges… All these issues, thorny as they may be, can find shared solutions; solutions which are reasonable, equitable and lasting”.

On behalf of Pope Francis, I thank you most sincerely for what you have done and continue to do to assist in every way refugees and migrants, who are among those most left behind and most in need. And thank you for joining us for this Side Event.

1 Joint Declaration of His Holiness Bartholomew, Ecumenical Patriarch of Constantinople, of His Beatitude Hieronymos, Archbishop of Athens And All Greece, and of His Holiness Pope Francis, Mória Refugee Camp, Lesbos, Saturday, 16 April 2016.
2 http://www.unicef.it/Allegati/Uprooted_report.pdf.
3 Pope Francis, Meeting with Civil Authorities during his Apostolic Journey to Bolivia, La Paz Cathedral, Bolivia, 8 July 2015.