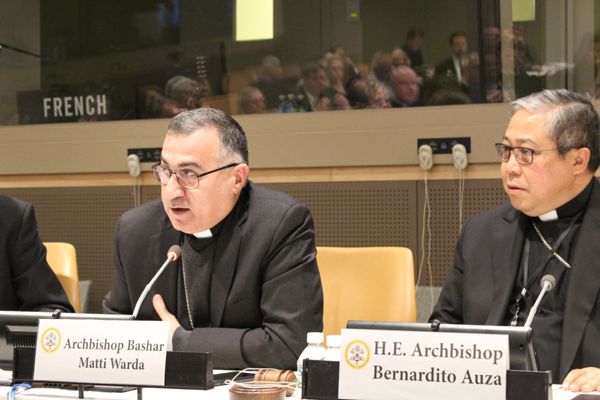 Preserving Pluralism and Diversity in the Nineveh Region 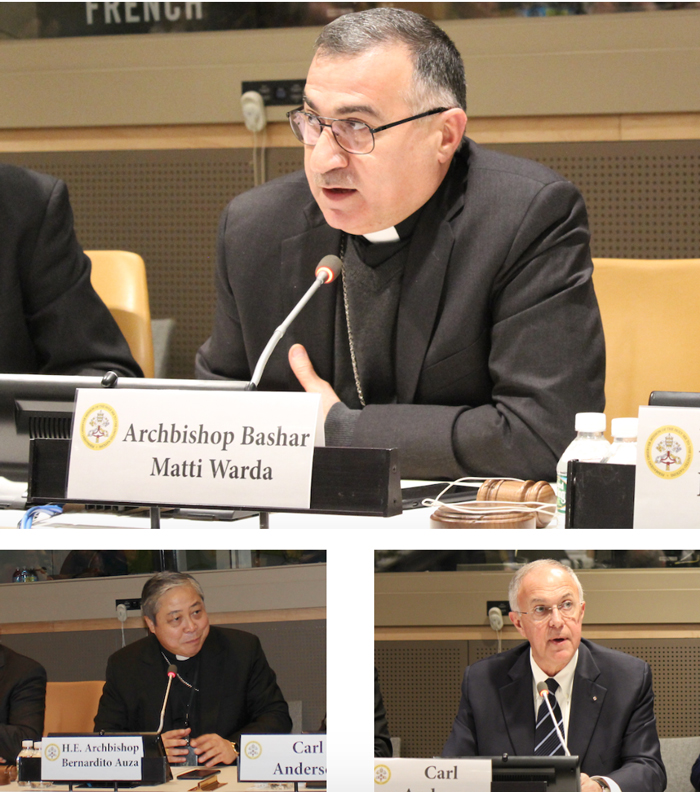 ISIS is on the verge of military defeat, but unless those displaced from the Nineveh Plains can return, ISIS will have succeeded in its ideological objective to eliminate religious minorities from the region, according to the experts working on resettlement efforts.

On November 30, the Permanent Observer Mission of the Holy See to the UN, together with the Nineveh Reconstruction Committee (NRC) and the Knights of Columbus, organized a side event entitled “Preserving Pluralism and Diversity in the Nineveh Region” at UN Headquarters.

In opening remarks, Archbishop Bernardito Auza, Permanent Observer of the Holy See to the UN, said that restoring those displaced by ISIS back home to the Nineveh Plains will not only require restoring houses, schools, and places of worship, but also rebuilding society towards peaceful coexistence for the region’s diverse ethnic and religious groups.

Returning religious minorities to the Nineveh Plains, where 40 percent of Iraq’s Christians lived before 2014, is also of deep importance to Pope Francis. After being given a brand new, special edition Lamborghini Huracan in the middle of November, he announced that the luxury car would be auctioned off with the proceeds donated to the “Return to the Roots” project being coordinated by the Nineveh Reconstruction Committee.

In addition to contributing millions of dollars in aid to persecuted Christians and other religious minorities, the Knights of Columbus played a large role in petitioning the United States Congress to recognize the atrocities committed by ISIS towards Christians as genocide.

Supreme Knight Carl Anderson of the Knights of Columbus said that if the displaced religious minorities are unable to return home to the Nineveh Region, ISIS will have won their ideological battle.

“While ISIS is now gone as a military force, so too are the victims they forcibly evicted,” he said. “The philosophy behind their genocide – the idea of cleansing Iraq of religious minority groups like Yazidis and Christians – is on the cusp of success.” 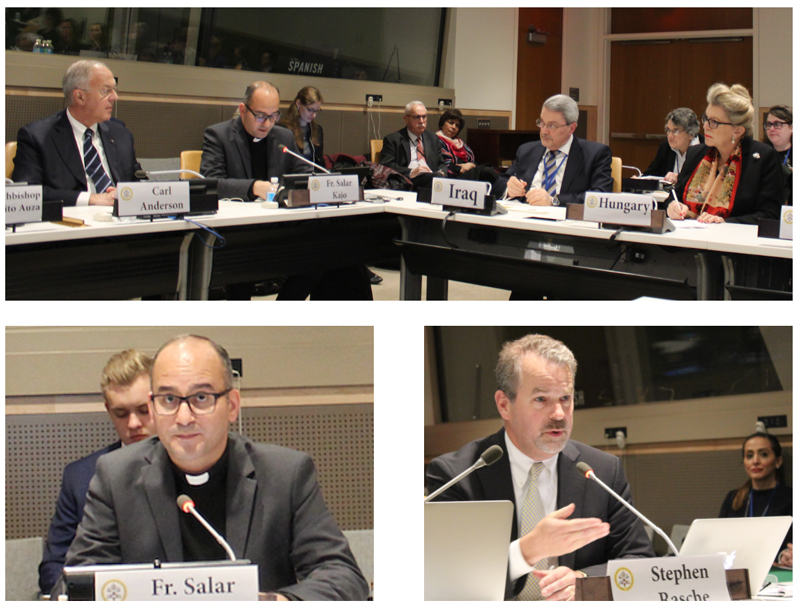 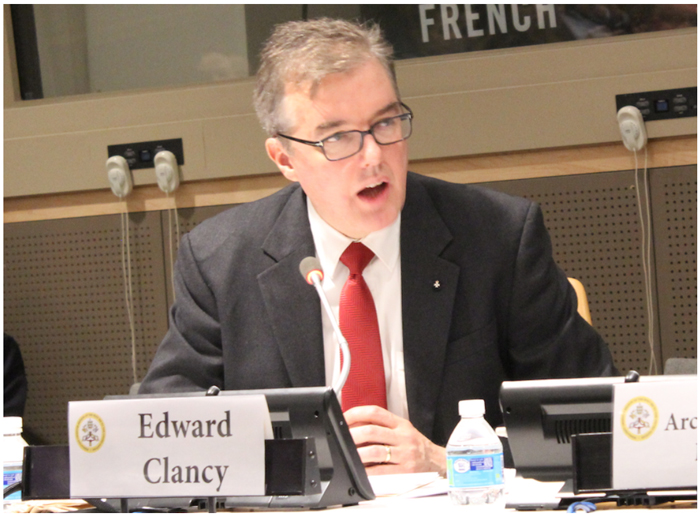 Archbishop Bashar Matti Warda, Chaldean Catholic Archbishop of Erbil, cared for hundreds of thousands of refugees and said that the NRC was created among the three largest Churches of Iraq - the Chaldean Catholic, Syriac Catholic and Syriac Orthodox - to help streamline and unify efforts to care for the 125,000 internally displaced Christians and other minority religious groups driven out of their homes by ISIS.

“We are here not to speak from the point of view only of victims, but also from the point of view of a key partner to the future of pluralism in Iraq,” Archbishop Warda said. “It is obvious that the Christians in Iraq, especially the Church leaders have shown their commitment to be part of the solution not part of the problem in terms of bringing peace and human rights to Iraq.”

Edward Clancy, Director of Outreach for Aid to the Church in Need USA, said the Aid to the Church in Need is currently raising $250 million dollars for long-term reconstruction. It has a seven point plan to help Iraqis be agents of change for the country, with programs to create jobs through micro-investing, prepare and empower young adults to rebuild their communities, heal the psychological effects of war and displacement, and promote inter-faith dialogue.

Clancy said Nineveh is behind in recovery. Only 12 percent of Christian populations have returned, while 90 percent of those displaced from East Mosul have been able to return home.

“Action is needed now or the Christian community which has been present in Iraq for nearly two millennia will become a historical footnote.”

Father Salar Kajo, Vicar General of the Diocese of Al Qosh and pastor of three Chaldean parishes in the northern Nineveh Plain, said that when the Christian towns of Nineveh began to be liberated in 2016, people were hopeful to return home.

“When they arrived, they found their towns had been destroyed in the fighting.  The houses that were not destroyed had all been looted.  The churches and cemeteries had all been desecrated.  There was no power and no water,” Father Kajo said.

In addition to material needs, those who have already returned to Nineveh live in instability once more due to conflict between the Kurdish army and Iraqi army.

“They are deeply afraid of more violence.  They sleep with suitcases already packed,” he said. “I fear that if some stability cannot come in these next months, the Christian people will break and leave the land of Nineveh forever.”

Stephen Rasche, Director and Legal Counsel of Nineveh Reconstruction Committee, said that while progress has been made in Iraq, the Nineveh region faces many challenges.

“Primary amongst these obstacles is the current standoff between the Kurdish Government and the Iraqi forces, which has carved Nineveh in half, and made towns in which we need to work inaccessible,” he said. “I urge [the United Nations] to make every effort to bring about a peaceful resolution to the stalemate currently existing in Nineveh so that restoration and recovery efforts can continue for the ancient people of this land.”

Ambassador Mohammed Hussein Moh'd Ali Bahr Aluloom, Permanent Representative of Iraq, said that the three years of conflict with ISIS illustrate the importance of a united Iraq in light of the diversity embedded in the country’s character.

Ambassador Katalin Bogyay, Permanent Representative of Hungary to the United Nations, a country that has given millions of dollars of aid to the NRC, said that religious and ethnic pluralism must be based on interreligious and intercultural dialogue, which has the greatest impact when religious leaders are at the table.

“We need to work with leaders from all religions. You can be heard by people who will probably not listen to us,” Ambassador Bogyay said.

Poland has contributed to preserving pluralism and cultural diversity most especially through the rebuilding of cultural heritage sites. Minister Counselor Pawel Radomski, Deputy Permanent Representative of Poland to the United Nations, highlighted the importance of rebuilding cultural and religious sites, particularly worship sites, for those of different religious backgrounds.

“Given the cultural and religious tradition of my country, Poland closely follows the situation of Christians around the world,” Radomski said. “At the same time, projects involving the renovation of Muslim places of worship which constitute an inseparable part of Iraq’s culture and heritage are treated with utmost seriousness. The multi-ethnic Nineveh providence deserves our special attention.” 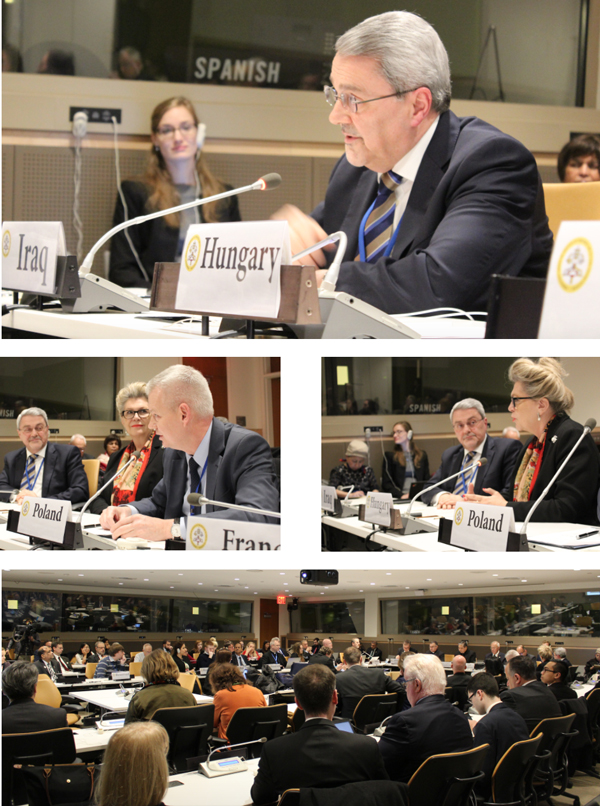