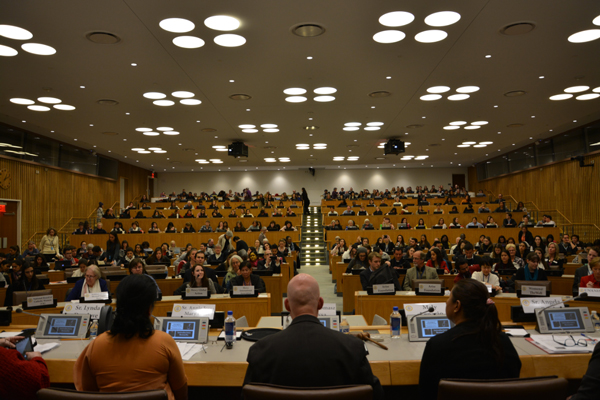 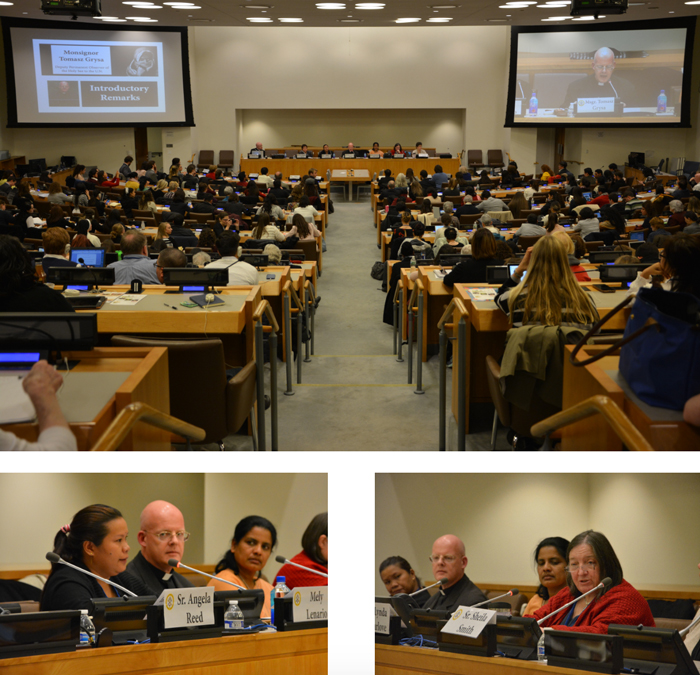 The best way to eradicate human trafficking is to prevent people from being vulnerable to being lured into it in the first place, experts and advocates testified at a March 13 conference, stating that economic exclusion is one of the largest push and pull factors, especially among rural women.

The Permanent Observer Mission of the Holy See to the UN hosted the side event during the 62nd Session of the Commission on the Status of Women (CSW62). The conference was entitled “Preventing Human Trafficking among Rural Women and Girls: Integrating Inherent Dignity into a Human Rights Model.” It was co-sponsored by Mercy International Association, Mercy Global Action, Society of the Sacred Heart, The Arise Foundation, Women@TheWell, Congregation of Our Lady of Charity of the Good Shepherd, Institute of the Blessed Virgin Mary, UNANIMA and the National Board of Catholic Women (UK). It was the first of five conferences the during CSW62.

Monsignor Tomasz Grysa, Deputy Permanent Observer of the Permanent Observer Mission of the Holy See to the UN, who moderated the event on behalf of Archbishop Auza, said in his opening remarks that human trafficking happens everywhere, but attention is normally focused on cities where the demand is highest and media outlets, governments and NGOs are most concentrated.

“But cities are normally not where most trafficking victims come from,” Monsignor Grysa clarified, noting that victims of trafficking come disproportionately from rural areas. “Rural girls and women are especially vulnerable to the lies of traffickers who promise them good work, good food and education in the big cities.”

While everyone is called to take part in the worldwide mobilization necessary to eradicate the evil of trafficking, he said, some of the most impactful work comes from women’s religious communities comprised of sisters whom he called “heroines,” for their work on the front lines in remote areas assisting vulnerable and violated women.

The common narrative of rural women lured into big cities by the false promises of traffickers and forced into sex slavery was described at the keynote speech of the conference by survivor Mely Lenario from the Philippines.

As a child, after witnessing her stepfather raping her sister, her mother sent her away from her rural village to live in an orphanage. As an teen, she and her friends were approached by a “friendly and elegant” woman who invited them to work and receive a free education in the Cebu City. She was instead brought to a small house in the city's red-light district where she was offered drugs and forced into prostitution.

“I even knelt in front of [the Madame] begging her to have pity on me because I was still young, but she insisted that I needed to pay for all the expenses in coming to Cebu,” she said. “My handlers were very strict. If we didn’t have any customers, they wouldn’t allow us to eat.”

Lenario finally escaped with the help of missionary priests and moved into a safehouse run by the Good Shepherd sisters.

She is now studying social work and serves other trafficking survivors as an outreach worker and “survivor-advocate” for the Sisters who helped her in the Philippines.

Sr. Annie Jesus Mary Louis, a social worker and Franciscan Missionary of Mary has worked for a decade with women in Chhattisgarh, India, to rescue them from situations like Lenario’s and prevent their first being ensnared, through providing education and work opportunities in their rural areas so that they are not forced to migrate to urban cities where they are exposed to new vulnerabilities and exposed to traffickers.

“These women and girls [who were caught in sexual slavery] did not wake up one day and decide to move to the city to enter prostitution; they were manipulated from their homes,” Sr. Louis said, describing the lack of access to adequate employment, education, healthcare and sanitation they face.

“Traffickers know all of this. They know that the parents of children in my area are easily deceived and sometimes so desperate that they willingly sell their own children," she said. “Sexual exploitation is big business; Someone buys, someone sells. In this case, the product is sexual access to another human being.”

Sr. Angela Reed, RSM, Ph.D., Coordinator Mercy Global Action at the UN who has extensively researched preventative measures to end trafficking, especially through work with trafficking survivors, challenged the idea that prosecuting traffickers to cease demand is sufficient to end trafficking and argued that it is only a short-sighted, partial solution.

“There is no doubt that trafficking is demand driven, and we must work to end demand. We must also stop supply,” Sister Reed said, noting that while it is crass to talk about human beings in terms of supply and demand, the act of trafficking violates human dignity and commodifies human beings.

Preventing and ending the exploitation of rural women who make up the supply involves reducing the root causes and structures that make a woman vulnerable to trafficking throughout her entire life, by providing access to services that correspond to her human dignity, such as eradicating poverty and hunger and ensuring healthcare, quality education, and decent employment.

“Formerly trafficked women challenge the view that being trafficked for sexual exploitation is a single isolated event in their lives. Instead they draw attention to human rights violations and systemic oppression that occur throughout their entire lives,” Sister Reed said.

While rural women are largely impacted through the preventive work of small-scale organizations like Sr. Louis’ religious order and other community based projects that are in the best positions to serve their own needs, they are limited to small-scale budgets that pale in comparison to the multi-billion dollar trafficking industry.

Sister Sheila Smith, UN Representative for the Society of the Sacred Heart, spent years serving rural and indigenous women and girls in Canada who are disproportionately victims of trafficking and said that their human dignity is violated not only in the act of trafficking, but also in the exclusion they regularly face.

“There are a lot of obstacles: transportation, technology,” she said. ““The particular women I work with, they know what is needed in their communities, but it is such a struggle to get the funds to do the work.”

Most funding goes to large NGO instutions, and rarely funnels into the hands of advocates on the frontlines who make the greatest impact, according to Sister Lynda Dearlove, founder of Women@theWell and Arise Foundation Trustee.

“There are already, in countless rural areas worldwide, men and women working to combat the horrific impact of traffickers in their community,” Sister Dearlove said. “They have long-term enduring relationships with those living in rural areas. They are trusted voices speaking into communities, often people of those communities, walking alongside them in their daily battle for survival.”

“The global community simply isn’t very good at supporting this kind of work,” Sister Dearlove said, since the eradicating trafficking in rural communities “cannot be done by simply pouring more funding into the large NGO institutions, or flying more experts and external workers into remote regions.

Monsignor Grysa finished the event by calling the event “very moving” and reiterated the speakers “impassioned appeals to listen more attentively to those from rural areas, to support those groups on the ground who have credibility and are helping them, and to create the conditions better to prevent others’ being vulnerable to trafficking in the future.” 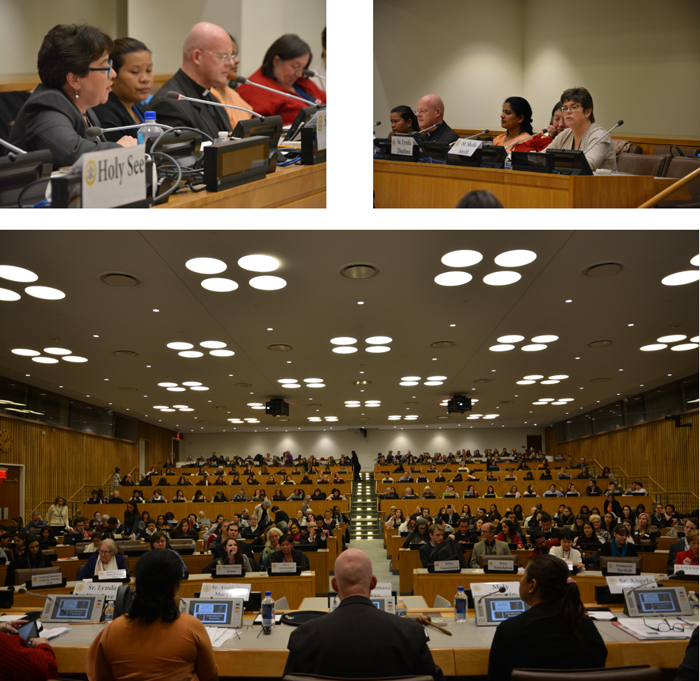